Scaredy-Cat? Here are 10 Non-Scary Specials to Watch This Halloween

Constant horror movie binging can take a toll on one’s delicate psyche, so why not take a break from heart-pounding slashers and nightmare-inducing flicks with these 10 light and fun Halloween TV specials?

The episodes on this list will make you feel warm and fuzzy like a wooly scarf on an autumn day, make you laugh Pumpkin Spice lattes from your nose, and serve as all-around perfect October viewing.

Without further ado (and in no particular order), here are 10 cozy and non-scary TV episodes to watch this Halloween season. 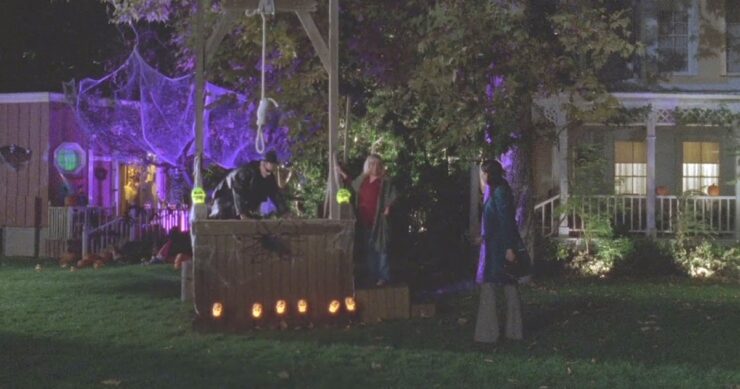 Season 6, Episode 7
Where to watch it: Netflix

Stars Hollow has been known to go overboard on festivities and Halloween is no exception. Watch kooky residents get into the spooky spirit while Lorelei attempts to electrocute and dismember the diner owner, Luke, as an over the top skit.

Sadly, this one includes a falling out between Rory and Lorelei but, don’t worry! It’s still a feel-good viewing, as the quips more than make up for it. 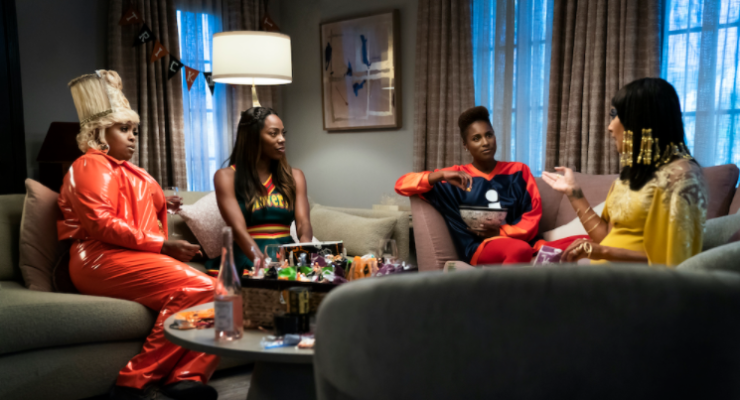 Season 4, Episode 2
Where to watch it: HBO

Insecure always delivers on comedy but there is something exceptionally funny about its opening scene where Issa and friends are in iconic costumes. We’re looking at you, Kelli, a.k.a Halle Berry.

Besides the costume hangout, there is a lot of drama between Molly and Issa in this episode, set against the Halloween backdrop.

Friends: The One with the Halloween Party 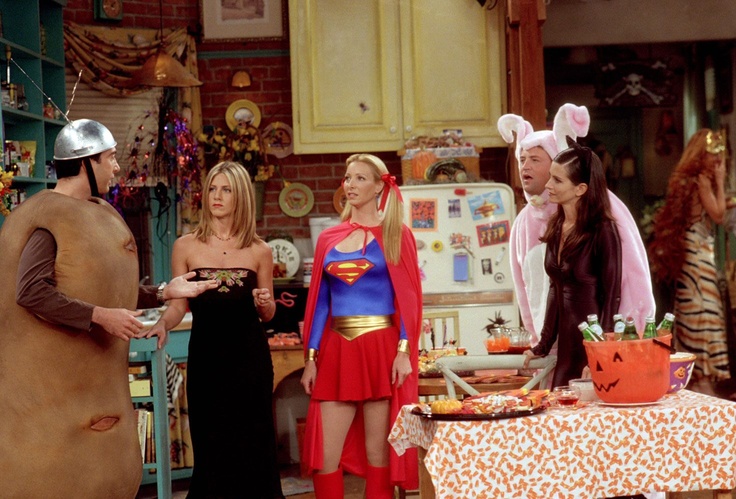 Season 8, Episode 6
Where to watch it: HBO Max

As classic as a slice of pumpkin pie in fall, this one is a must-watch in October.

Watch the mess unfold in Monica and Chandler’s costume party where Chandler and Ross contend for worst costume there. The former gets stuck with a pink bunny suit and Ross chooses to be a potato. You decide which is worse.

Season 1, Episode 6
Where to watch it: Hulu

For those of us who like to make a big song and dance about October 31st, the 99th Precinct’s yearly Halloween Heist is right up our alley.

In this epic episode, Jake must take Holt’s medal from his office but, if you know how outlandish their antics can be, you know it isn’t as simple as that. Plus, this original Halloween episode spawned an epic series of heists in subsequent B99 seasons, upping the ante every time. 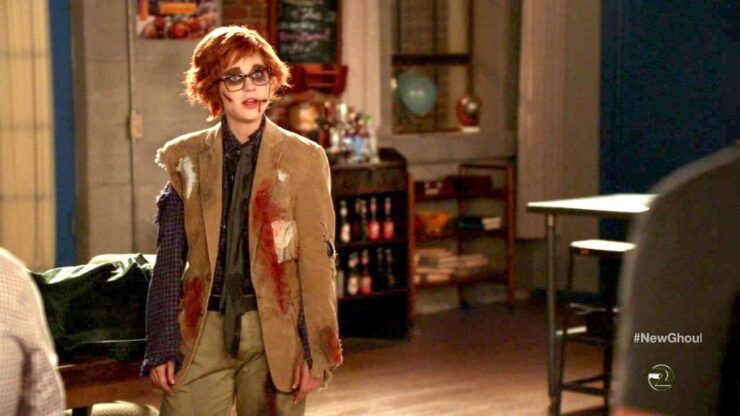 Season 2, Episode 6
Where to watch it: Netflix

For New Girls fans, this is not just about funny costumes and haunted houses. It’s vital to the Jess and Nick saga: Jess is beginning to realize she has real feelings for  Nick. How will she deal with her complex emotions? With grace and maturity?

No, this is New Girl we’re talking about and everything is always hilariously awkward. That’s the best part of this episode. Everything else —like the carnival and a terrifying clown — is just icing on the cake. 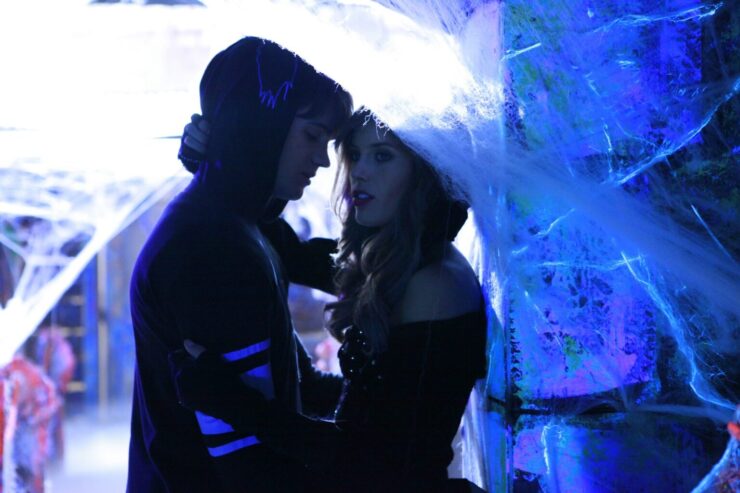 Season 1, Episode 7
Where to watch it: Netflix

Any TVD episode is arguably a worthy Halloween selection (the series has all the Halloween monsters: vampires, witches, ghosts, and the devil himself) but if we’re going to recommend any in particular, it has to be the one titled after the holiday.

In this one, Vicki continues to spiral as a newly fledged vampire and soon she is on the hunt to find something to sink her teeth into. 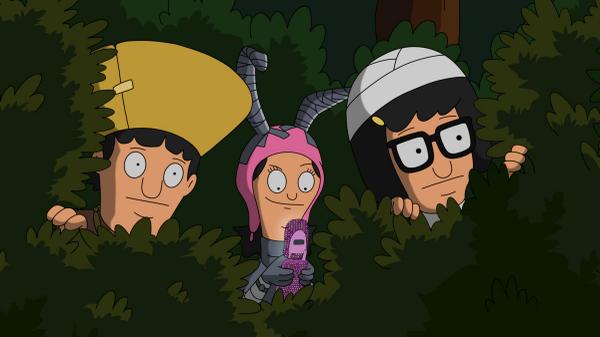 Season 3, Episode 2
Where to watch it: Hulu

Remember what it was like to go to back to school the day after Halloween just to find out some of your classmates’ neighbors were giving out FULL-SIZE candy? The injustice!

Now you can relive that feeling with Tina, Louise, and Gene Belcher as they head out trick or treating without the adults for the first time. There is also a looming Hell Hunt helmed by teenagers, which gives the cartoon an impending sense of danger.

The Simpsons: Treehouse of Horror V 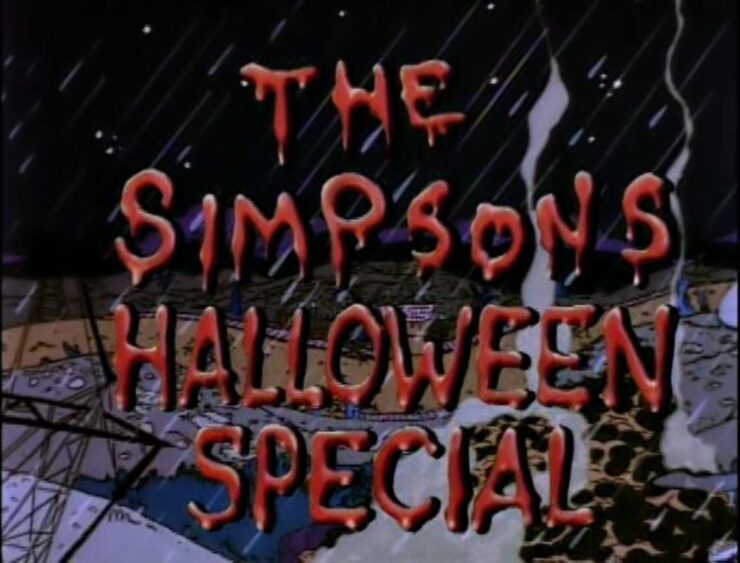 Season 6, Episode 6
Where to watch it: Disney+

’90s kids, this one is for you. The anthology episode includes three mini stories, each just spooky enough, but not too scary for us scaredy-cats.

The first segment is inspired by Stephen King’s The Shining in which Homer becomes the caretaker of Mr. Burns’ lodge and goes a little berserk (all work and no play makes Homer a dull boy).

“Time and Punishment” gives off Twilight Zone vibes as Homer travels back in time repeatedly which alters his very reality.

In the final, titled “Nightmare Cafeteria,” Principal Skinner decides to make lunch food out of the bodies of detention students.

This special routinely ranks towards the top of fans’ lists, and even after decades on the air, it’s the earliest Treehouse of Horror specials that still reign supreme during Halloween.

Sabrina the Teenage Witch: A River of Candy Corn Runs Through It 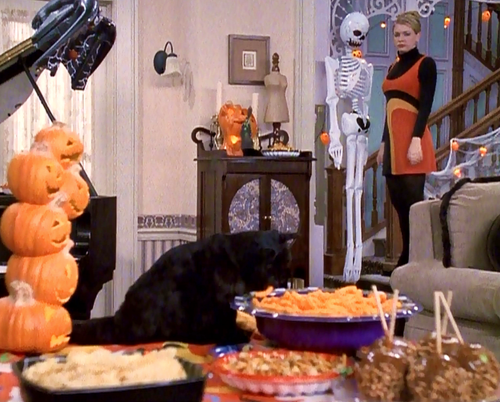 Season 2, Episode 6
Where to watch it: Hulu

Again, this series is full of Halloween themes: a teenage witch making spells alongside her talking cat — that’s optimal witchy content. But if you want to get to the heart of the festivities “A River of Candy Corn Runs Through It” makes the best choice.

Sabrina’s best friend, Valerie, takes it upon herself to invite the entire school to Sabrina’s home, but she has no idea how awful an idea it is to invite mortals to a truly bewitching home. This is a light and spellbinding special that contrasts with the darkness of the new Chilling Adventures of Sabrina series, depending on your mood. 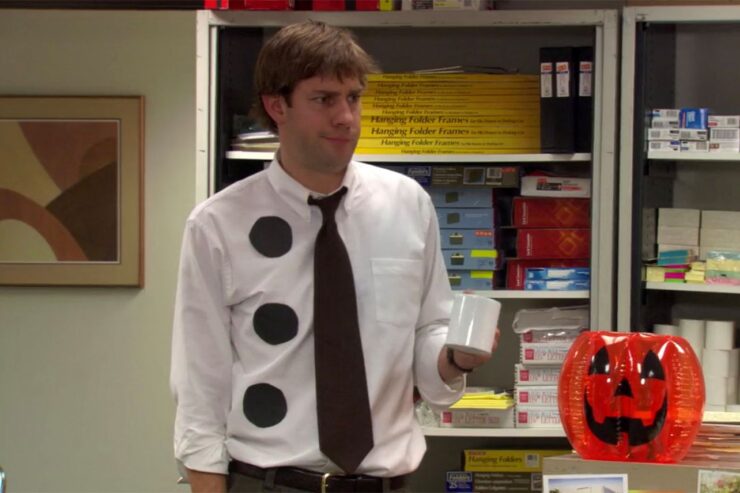 Season 2, episode 5
Where to watch it: Netflix

The Office has several great options to watch this month (“Costume Contest”, “Employee Transfer”, and “Spooked” make great alternatives) but this one is the one most people flock to on All Hallows’ Eve.

In it, Michael must fire one person but, like all things he does, he struggles to do so and results in someone smashing a pumpkin onto his car. Bonus Halloween content includes Jim’s no-frills “three-hole punch” costume, Michael’s paper-mace head, and Dwight as a Sith Lord.

What series are you planning to watch in celebration of Halloween? Will you add one of the one’s on our list to your queue? Let us know in the comments below!

For more Halloween content, be sure to tune in to Sideshow’s Spooktacular 2020 all week long! From October 22nd to 31st, be prepared for thrills and chills, ghoulish giveaways, creepy content, and more. Visit spooktacular.com for more information.