5 Must-Read Comics Your Favorite Netflix Shows Are Based On

When it comes to providing binge-worthy content, no one does it like Netflix. Who hasn’t accidentally spent the day on the couch, watching an entire season in a day or two? Netflix shows are seriously worthy of staying in all weekend. But the widely-popular streaming company doesn’t only offer original content. In fact, many of its most successful shows are actually based on equally popular comics.

Just look at Marvel’s Netflix shows. These comic book shows, like Daredevil, Jessica Jones, and The Punisher, were so great that fans were left utterly heartbroken after their cancellations were announced. That is an all too familiar feeling when any of our favorite shows end.

So, what’s a fan to do when their favorite comic show ends? Why not go back to the source material?

Stick with us as we discuss the best comic books that your favorite Netflix shows are based on, that you should definitely be reading! 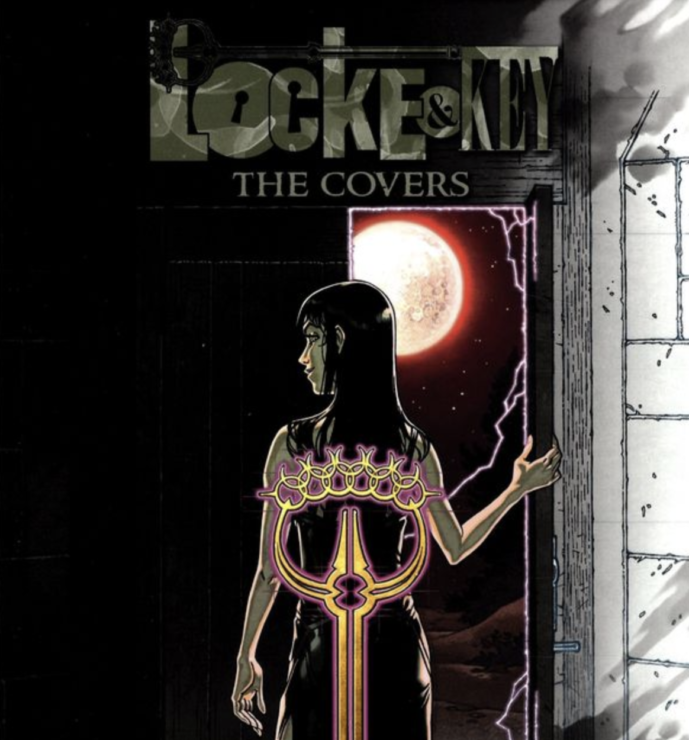 Locke & Key is one of the latest comics to be adapted by the streaming service. It premiered on February 7 and centers on the Lockes, a family dealing with trauma and loss while they move to their old family home, discovering keys with the powers to change reality.

It stars Darby Stanchfield (Scandal) and Georgie from IT, Jackson Robert Scott, and was developed by Carlton Cuse (Lost) and Aron Eli Coleite (Heroes). Oh yeah, it’s also based on the comic of the same name written by Joe Hill, son of legendary Stephen King. So, you know it’s a show of high caliber.

If you haven’t watched the supernatural drama, what are you waiting for? It’s already a Netflix hit with a cliffhanger so high it absolutely warrants a second season. Pick up Hill’s story to see the Lockes in scarier situations (think more Stephen King and less Stranger Things) and why this version was worthy of an Eisner Award.

I Am Not Okay With This 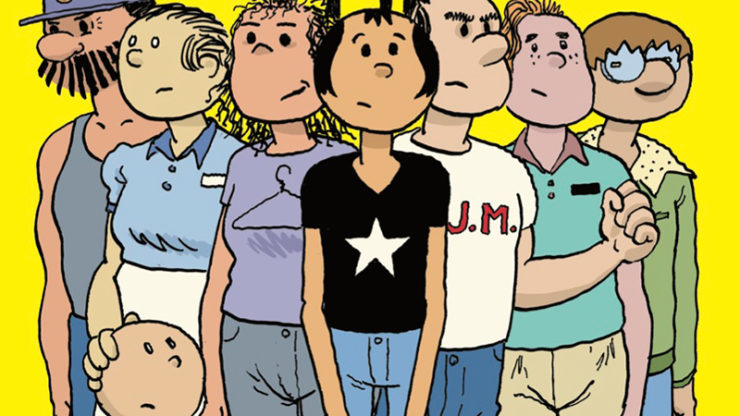 Fans of small towns, teen angst, X-Men, and The End of the F***ing World, have you seen I Am Not Okay With This? This series is now streaming and just premiered on February 26 but the internet has actually been buzzing about it since it’s very ambiguous teaser dropped a few weeks prior.

The graphic novel is written and drawn by Charles Forsman, who wrote The End of the F***ing World, too, (another to add to your to-be-read collection) and is filled with his brilliant style.

The coming-of-age show stars not one, but two IT cast members; Sophia Lillis (Beverly Marsh) and Wyatt Oleff (Stanley Uris). Lillis plays Syd, a temperamental teen who’s not only going through puberty but also having to deal with her emerging superpowers.

The original story is just as funny and moody as, but definitely not as John Hughes-y as, its Netflix counterpart. Instead, its cartoony style and unabashed tone set it apart and make it really worth a read. 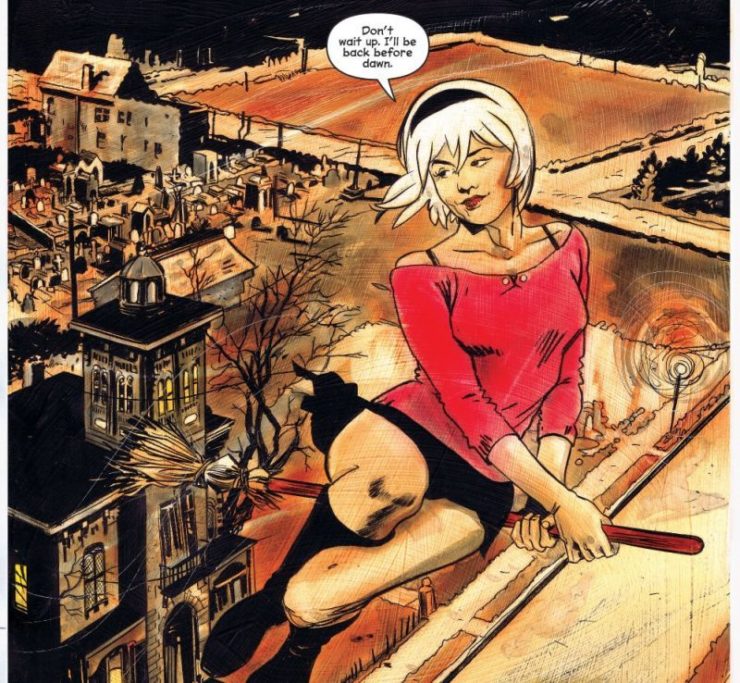 Welcome to hell, witches. Similar to Sabrina’s biological father’s birthplace, this show is eternally hot. Its third season wrapped in January and fans are already patiently waiting for the 4th installment.

If you’re craving more Sabrina, Ambrose, and the Weird Sisters, head to your local comic store for the original witch. Sabrina has had quite a few renditions in print through Archie Comics. If you’re looking for something more similar in tone to Melissa Joan Hart’s version, pick up the standard Sabrina the Teenage Witch. Sabrina’s first comic started in 1983 and was so successful it sparked ABC’s show and inspired a manga version in 2004.

Fans of the Netflix series should pick up Roberto Aguirre-Sacasa’s Chilling Adventures comic by Archie’s horror imprint. In this version, you can follow an even darker Sabrina—yes, darker than Kiernan Shipka’s live-action version. 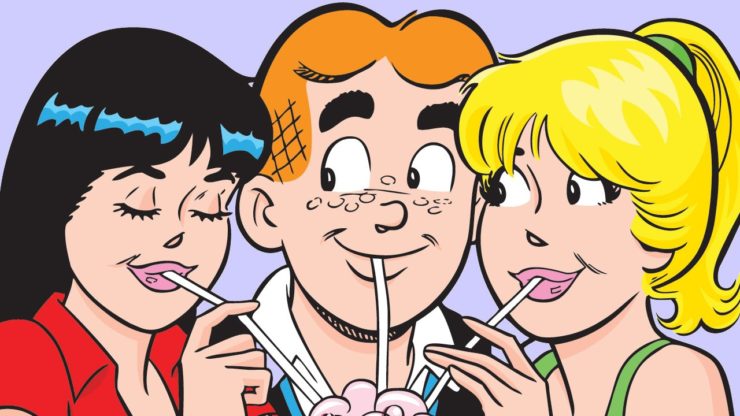 If you’re into CAOS, chances are you were first a Riverdale fan. The show is still a modern pop culture staple and has been confirmed for a fifth season. Riverdale may have first aired on the CW, but Netflix quickly scooped up its rights and you can watch Jughead, Betty, and Veronica on the streaming platform.

Riverdale isn’t only similar in tone to Sabrina- fans know they actually live in a shared world. Sabrina’s Greendale and Archie’s Riverdale are only separated by Sweetwater River. But their connectivity actually began in 1962, when Archie Comics introduced its classic characters to “Sabrina the Teen-Age Witch”, a cutesy magical blonde.

If you’re counting down the days for a Riverdale/Greendale crossover, read Archie’s Mad House #22 or Archie and Sabrina. In the latter it was revealed that the two characters had dated over a summer break! For a sinister Riverdale storyline, try Afterlife with Archie. The horror series is set in a Riverdale zombie apocalypse. 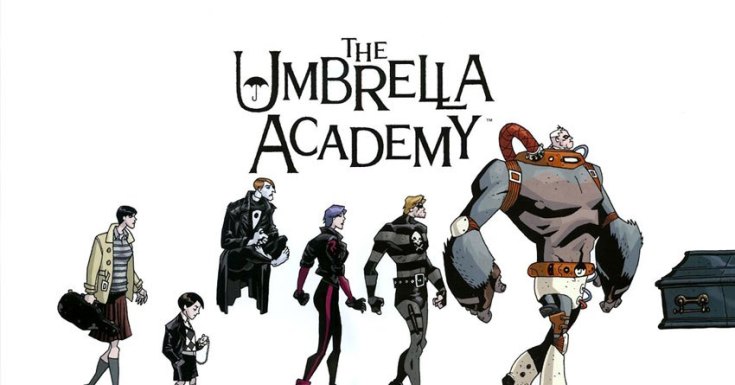 Another new Netflix gem, The Umbrella Academy premiered last February and has been renewed for a second season. It’s a show about six estranged siblings who are reunited by their father’s death. They are not ordinary brothers and sisters, though. In fact, they are all adopted with different birth mothers and distinct sets of superhuman abilities.

We won’t get too much into how the first season ended, but if the cliffhanger left you wanting more, you should consider reading the graphic novels. It will be interesting for readers to see how the source material and show treat Vanya differently, because they do (along with other marked differences for characters like Alison, Luther, and even Hazel and Cha-Cha). Not to mention the fact that the comic series is written by the lead singer of My Chemical Romance, Gerard Way (way cool).

The second season premiere date hasn’t been officially announced but will most likely be out toward the end of this year. It’s a long wait but Way’s graphic novels and his recently announced prequel, You Look Like Death (set to debut in April), should hold fans over until then.

What comic-book based shows are you watching on Netflix? Let Your Geek Sideshow and tell us in the comments!