Murder. Torture. Fiendish plots that perfectly amalgamate the insane with intelligence- The Joker does all these things and more.

One of the most feared (and loved) villains of all time provides us with endless entertainment through his crazy antics. Sometimes, they’re funny, even silly. But more often than not, his actions are downright horrifying.

Though we’re rooting for Batman, we need the Joker – he provides the conflict for a great story. We hope for a happy ending, and we may get it. But with his darkest plans come a huge amount of needless suffering, even if the problem is partially resolved by the Caped Crusader.

Let’s look back on the five worst things the Clown Prince of Crime has ever done – five times he truly disturbed us.

5. He Killed His Own Mother 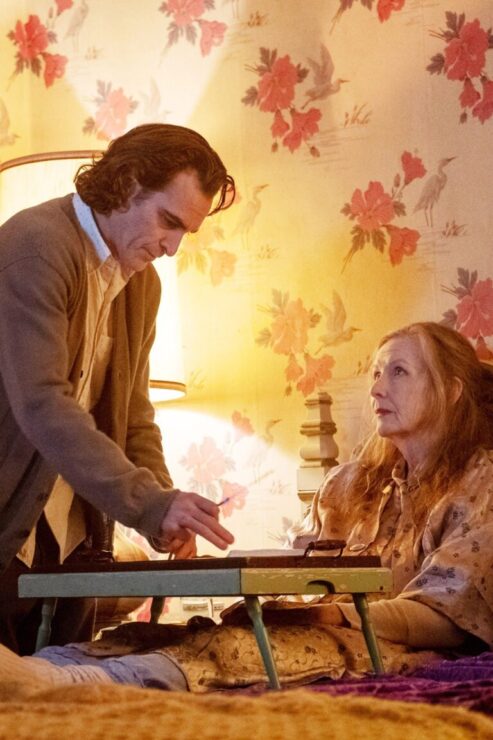 Last year, we were treated to a fantastic movie that explored the degeneration of mental health. Todd Phillips’ Joker has been appreciated by critics and fans alike. Not surprisingly, it featured a few of the Clown’s most disquieting moments.

The Joker was different in the film. Sure, he was insane, but we got to watch him slowly transform from a human being we could sympathize with into a maniacal animal. Though based on comics like The Killing Joke, the on-screen origin story was a bit different than what fans were used to. Of course, we can choose this as his origin story if we want to when we’re reading the more ambiguous comic titles. The main point the movie origin gets across is that the Joker used to be a human being. But evil begets evil – the character didn’t have a happy family life, and society didn’t have the time or compassion to help him with his mental illness.

Arthur Fleck was portrayed as a hopeless comedian raised in squalor by his mentally disturbed mother. Hatred builds within his soul thanks to his perceived weakness, his loneliness, and the lies his mother has fed him. Eventually, Fleck kills his own mother with a pillowcase. What kind of person does it take to kill anyone, especially their own mother?

4. He Tortured the Gordons 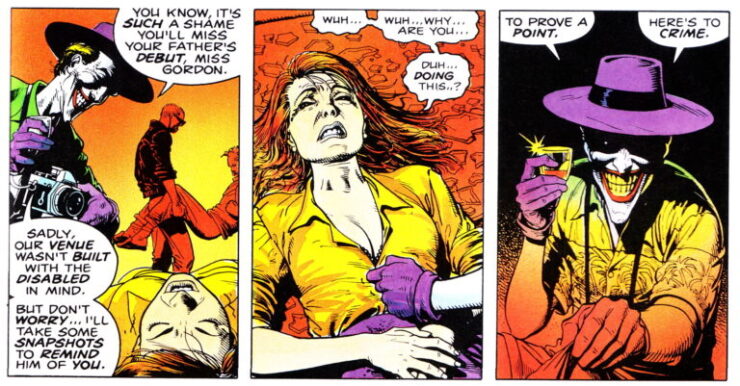 Alan Moore’s The Killing Joke smashed right through all the boundaries set in the world of graphic novels. It was gritty, complex, and frightening. To this day, it’s recognized along with Arkham Asylum as a graphic novel with realistic and literary elements. It has mature themes, fleshed out by some horrifying events.

No doubt the most horrifying moment was when Joker tried to drive Commissioner Jim Gordon insane. Gordon’s daughter, Barbara (A.K.A. Batwoman), was paralyzed by a shot from Joker’s gun. The villain then kidnaps Jim and forces him to watch videos of his daughter being horrifically tortured. The Joker’s point was to show Gordon that “one bad day” is all that stands between sanity and madness.

Ultimately, his plan failed – Barbara was rescued and Jim’s sanity didn’t abandon him. But the Joker did succeed in another area. He showed everybody how evil he truly is. 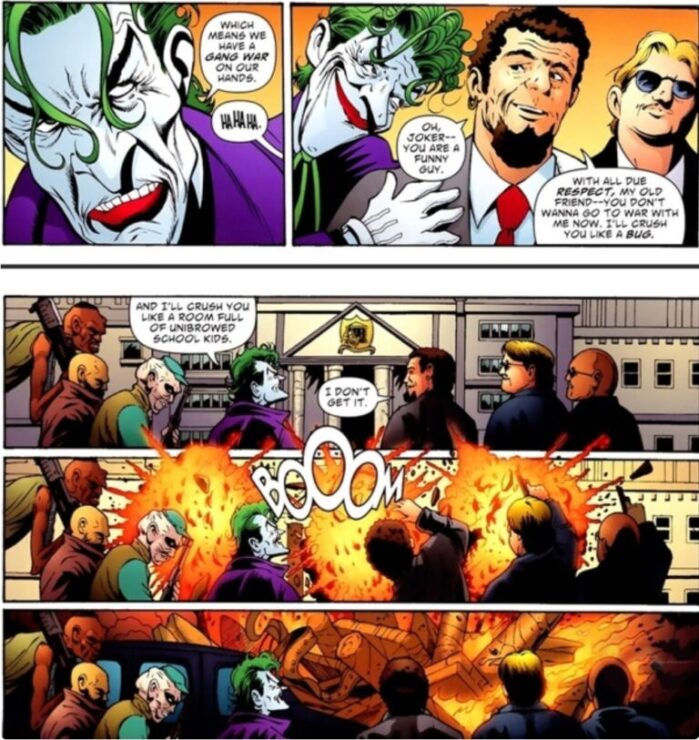 Even kids aren’t off limits for the Joker. In Batman: Cacophany, the world’s most evil villain gets angry over his essentially trademarked Joker poison being changed and used by someone else. Maxie Zeus transforms the chemical into an illicit street drug. He and the Joker have a discussion about it, but the Joker has his revenge planned all the while.

Because one of Maxie’s relatives is a student, the Joker blows up an entire school. Hundreds of young, innocent lives were needlessly cut short, making this act possibly the most evil thing Joker has ever done.

2. He Skinned Someone Alive 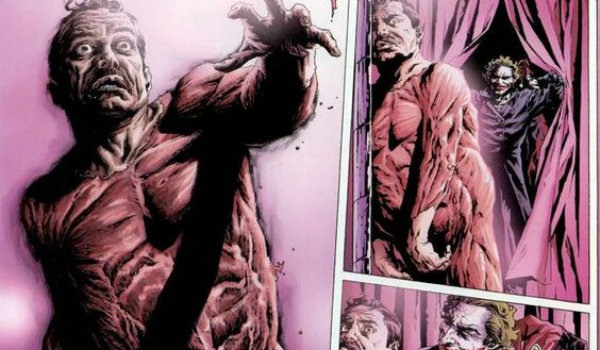 Written by Brian Azzarello in 2008, Joker was an interesting take on the darker side of DC Comics that stood outside the regular continuity.

Here, the Joker leaves Arkham Asylum and goes on one of his usual crime/murder sprees. But some of the stuff he does is freaky as hell, even for him. Early on, he hangs out at a strip club owned by one of his former business partners, Monty. One of the dancers is Harley Quinn, and the Joker doesn’t take too kindly to Monty’s lustful gawking.

So what does the Joker do? Skins Monty alive, of course. He then brings the skinless man out on the stage, letting him die in front of an audience.

The scene is just straight up nightmare fuel, and it’s one of the strongest instances of Joker’s primal, animal, and extremely evil nature. If you just read about it, you’d think, “Wow, that’s sick,” but you also kind of expect stuff like that from the Joker. But the artwork by Lee Bermejo is detailed enough to induce true chills. 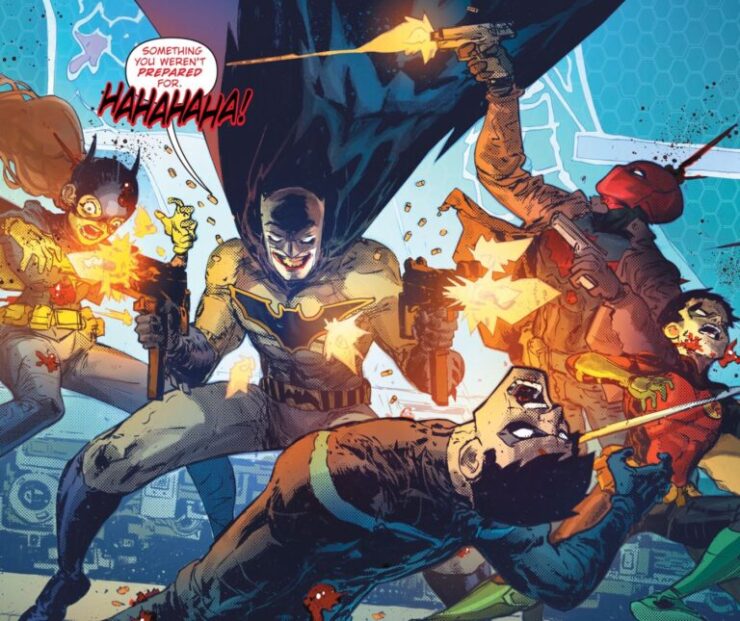 The Batman Who Laughs is one of the most creative DC Comics series we’ve read in years. And since it involves the Joker, you know it has to be disturbing as well.

Taking place in Earth-22 universe, the comics reveal that the Joker has infused his heart with a chemical meant to turn whoever kills him into a savage force of evil. And he wants his executioner to be the Dark Knight.

The Joker murders Jim Gordon, then shoots a bunch of parents in front of their kids. As if that weren’t horrible enough, he then exposes the kids to his sanity-stealing toxin. Naturally, Batman is furious, and he finally kills his arch-enemy. But then Batman is transformed into a sort of Joker/Batman hybrid.

He’s got the strength and cunning of the hero coupled with the malice and nihilism of the Joker. So not only did Batman suffer by watching so much horrible death – he’s now an evil monster himself.

Which of these heinous acts is the worst? Can you think of some others? Let us know in the comments and Let Your Geek Sideshow.

Moon Knight Gets a Director, Cyberpunk 2077 Delayed, and more!