Immortal and enthralling, vampires never quite seem to go out of style in pop culture. Whether it’s the 2022 debut of the Morbius movie introducing Marvel’s bloodsucking antihero to audiences, the impending revamp of Blade on the big screen, the 25th anniversary of Buffy the Vampire Slayer, or an upcoming television adaptation of Interview with the Vampire, we’re still completely hooked.

Maybe it’s their eternal youth and beauty that keeps us entranced. Perhaps it’s the struggle of keeping your humanity versus giving into your shadow self. Or it could just be that, given their historical status and seemingly undying nature, there’s a near-infinite amount of ways to use them in a story. And they’re not just on the big screen or in the pages of your high school English class. Comic books frequently feature these fearsome figures, creating some of the most memorable publications of the last several decades.

No need to go grave robbing to dig up some truly excellent comics to fill your sleepless nights. We really stuck our necks out for you with this one, so let’s make like Dracula and count down eight vampire graphic novels you’ll want to sink your fangs into. 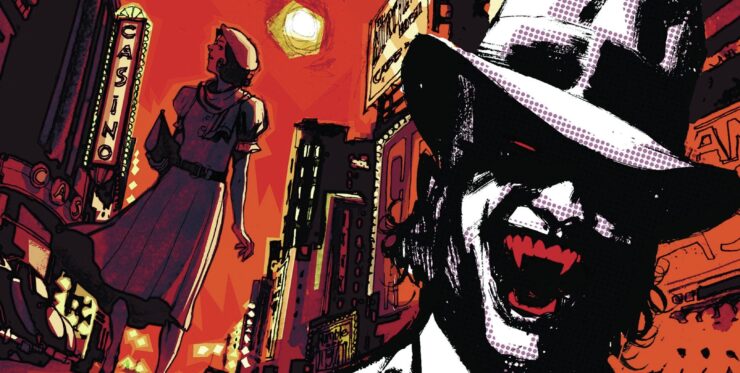 Perhaps the first indie comic anyone thinks of when vampires are mentioned, American Vampire is one of Vertigo’s most enduring publications. Using the allure of immortality to cast a retrospective gaze on American culture and history, this comic is full of intrigue, twists on the traditional vampire formula, and of course — horror.

In the series, vampires are multiple species, with different bloodlines and evolutions based on their global locations. The first American vampire, an outlaw named Skinner Sweet, has an entirely new physiology than those who came before him. As a result, he is faster, harder to kill, and stronger than most of the monsters before. Throughout the decades, various sects of bloodsuckers come into contact with one another, and eventually a struggling actress named Pearl Jones becomes a second American vampire.

In addition to Snyder’s direction of the series, Stephen King also penned some of the story for the first arc. As DC’s publication labels evolved, so did the series — after Vertigo shuttered, the hit gothic Western series rose from the grave under the DC Black Label imprint, concluding in October 2021. 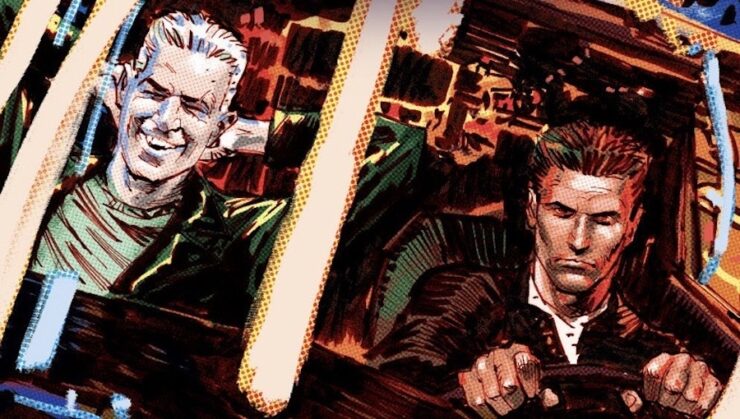 The original undead heartbreakers vying for Buffy the Vampire Slayer‘s attention, Angel and Spike are still seen as go-to examples of swoon-worthy vampires in pop culture. And they’ve featured in several self-titled comic series over the years. But whether you’re a Spuffy shipper or a Bangel diehard, you don’t want to miss BOOM! Studios’ re-vamp of the BTVS license.

Originally titled just Angel (2019), Angel + Spike is a four-volume adventure through the shadowy underside of Los Angeles. But don’t go in expecting the same storylines as the original television series — while some of the familiar faces are there (like Fred Burkle, Charles Gunn, and Lilah Morgan), this is a new and modernized continuity that changes the game in surprising ways.

While the book was cancelled in its fourth arc, it is a solid 16-issue supernatural detective series that stands out among the recent Buffy offerings. 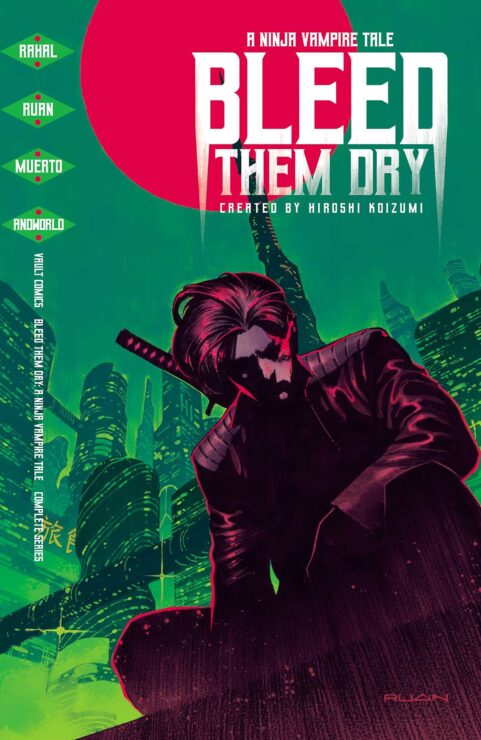 Vampires are functionally immortal, which often leads to stories taking deep dives into the world’s past. Where Bleed Them Dry differs, however, is by taking vampires to the far-flung future of the year 3333. In a Japanese-engineered mega-city called Asylum, a small population of vampires lives alongside humans, who have grown to accept the presence of Immortals in their world. However, a string of vampire murders drags detective Harper Halloway into a bloodcurdling mystery about the truth of humanity’s future.

This futuristic crime noir tale is moody and imaginative, blending genre elements that don’t usually end up alongside one another — technology and the gothic. With the Japanese-inspired setting, there’s also a healthy dose of ninja action in this Blade Runner-esque cyberpunk dystopia. Bleed Them Dry has been praised for its hyper-violent martial arts action with plenty of blood to spare.

The complete six-issue series is now available in a collected edition with 160 pages of futuristic vampire storytelling from which you can drink deep.

We previously covered this comic in our 10 Recent Must-Read Horror Comics for Monster Lovers, but it’s worth a mention here as well. The 1970s setting and punchy title indicate that readers shouldn’t expect the same traditional gothic imagery associated with the iconic vampire. Detective Quincy Harker is on the case as a string of starlets and other young women get killed nightly in Hollywood, California. As he continues his investigation, he ends up in the thrall of evil, unable to resist diving deeper.

This wildly innovative take on the Dracula narrative transforms the sultry count into an eldritch nightmare, a shadow without certain shape. Henderson’s Klimt-esque splash pages and bold colors make this tale a visual meditation on everything we associate with the centuries-old novel that, for many, still looks like a classic black and white film.

Dracula, Motherf**ker! is a brisk read, but is absolutely necessary for anyone who wants something other than the typical monster movies we hold up as the genre staples.

Garlic and the Vampire (HarperCollins) 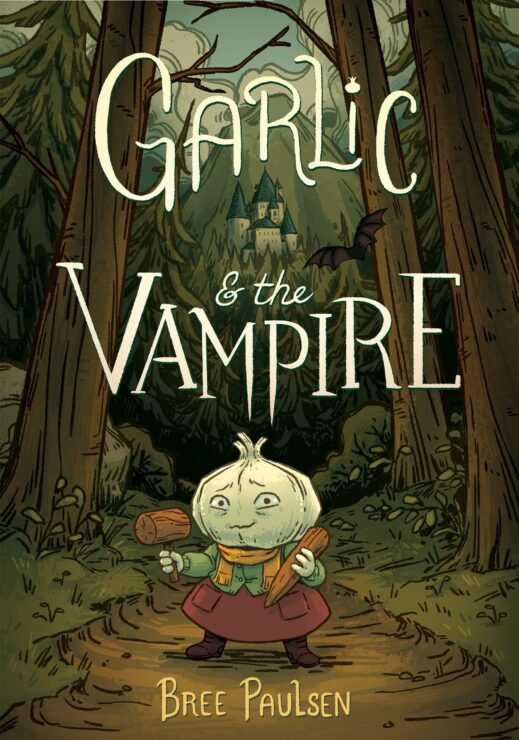 Perhaps the only truly all ages-friendly title on this list, Garlic and the Vampire is a charming adventure for middle-grade readers starring an unusual protagonist. Garlic is a young girl from a village of vegetable people who prefers to keep safe in her garden. However, a vampire moves into the mountains above her home, and being a bloodsucker’s natural enemy, she is eventually elected to confront the foe and save her village. Should be easy, right?

This lighthearted story teaches readers to discover their bravery in the face of fear, as Garlic goes to the castle to meet the mysterious vampire. Throwing out the traditional moody, gothic atmosphere of the genre, Garlic and the Vampire is bright and colorful, filled with natural wonders in a vegetable village and the surrounding forests. Paulsen’s playful visuals are expressive and packed with heart, and still introduce many staples of vampire lore from a unique perspective.

If your younger readers haven’t found their fangs for true terror yet, this cheerful graphic novel might be the perfect, pungent bite. 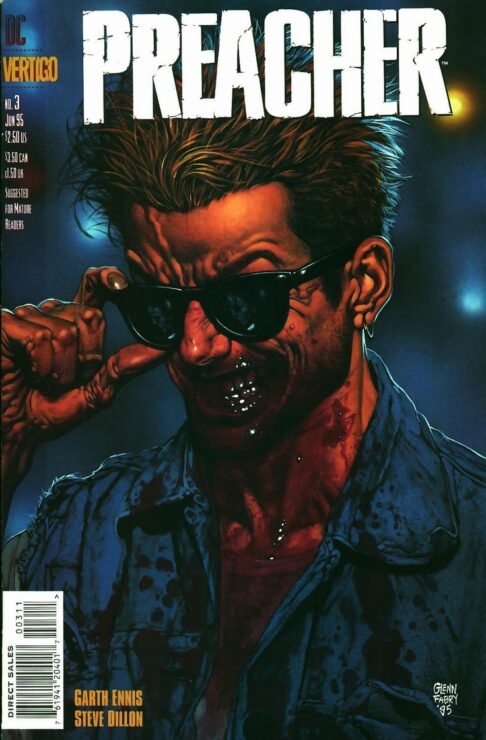 Another beloved Vertigo book, Preacher made waves for its biting satire and semi-blasphemous supernatural elements. Following small town preacher Jesse Custer after he’s possessed by an entity called Genesis, the holy man must travel across America in search of God, who has abandoned heaven. On his journey, he reunites with an old flame named Tulip O’Hare and meets an alcoholic Irish vampire named Cassidy.

While the comic isn’t solely about Cassidy or vampires at large, they do lurk in the shadows of the cross-country adventure. The only other main vampire is Eccarius, who has a small cadre of vampire-hopefuls called Les Enfants du Sang. But Preacher is packed with so many demons and other monster types to enjoy. Cassidy himself is known for the trademark sunglasses disguising his bloodshot eyes, as well as his addictions and parasitic relationships with others — adding on to the literal vampirism. As one of the main trio, he remains a fan-favorite character throughout.

Whether you’ve already watched the live-action adaptation or not, Preacher is a raucous accomplishment of independent storytelling worth your while. 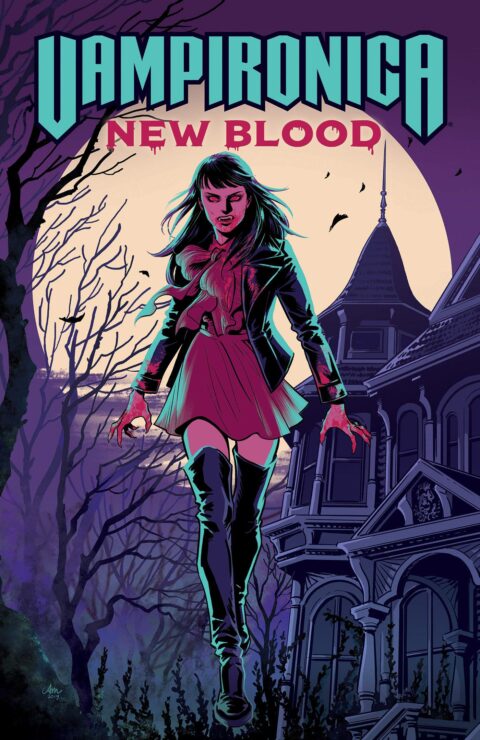 Afterlife with Archie opened up a whole new avenue of dark days for our favorite Riverdale residents and even their Greendale neighbors, like Sabrina. Jughead: The Hunger morphed everyone’s favorite layabout student into a ravenous werewolf, and as the name would suggest, Vampironica showed a fang-tastic twist on the resident rich girl’s perfect life.

The series has featured three story arcs: “First Blood,” “Jughead: The Hunger vs. Vampironica,” and “New Blood.” The first series showed Veronica Lodge adjusting to her new life as a vampire after being freshly bitten. However, after contending with whether to feed off her friends, she becomes a protector fending off other bloodsuckers as she tries to figure out her curse. Her crossover with Jughead’s series showed why werewolves and vampires live separate lives using some strange parallel universe exploration. Finally, the third series saw Veronica discovering her family’s true history, leading back to the tyrant Sir Francis Lodge, progenitor of the vampires.

The Archie Horror imprint offerings surprised many fans, but resonated just as much with readers. Truly, it provided some much needed new blood to the iconic publishing house. 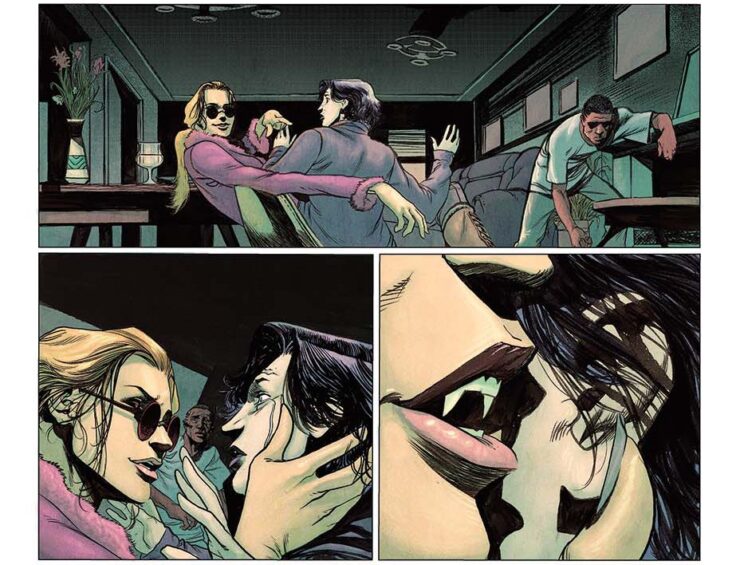 Based on the ever-popular tabletop roleplaying game of the same name, Vampire: The Masquerade was Vault’s first foray into the world of licensed storytelling. But like any good gaming session, this story is chock-full of original characters, intriguing plots, and even supplemental material authorized for play with the official VTM handbooks.

Keeping the spirit of the game alive, the book revels in political intrigue as Cecily Bain, the “dirty boot” of the Twin Cities Camarilla, contends with warring factions, human hunters, and eventually a crossover with the lupine clans of Werewolf: The Apocalypse. Additionally, the running B-plot follows a group of Anarchs, or vampires who reject the rules of their society.

Even for the uninitiated, the book and its in-world terminology are easy enough to follow. What results is a clever and effective narrative that may leave readers thirsting for a Vampire: The Masquerade campaign of their own to play in.

It’s hard to resist the hypnotic thrall of a good vampire story. Were any of these graphic novels new to you? Any other notable comics we may have left out? Give us your vampire hot stakes below and don’t forget to Let Your Geek Sideshow!