Thanksgiving is the one time of the year where you can really go ham, or should I say turkey, on the most indulgent food. Feast-goers usually take not one but two, or maybe even three servings of turkey slathered in gravy, heaps of mash potatoes and butter, and candied yams for dessert. There’s nothing as intense as the experience…until the food coma hits, that is.

When the sugar high settles and you come crashing down, there’s only one sensible thing to do: pop in (or stream) some of the best Thanksgiving movies before hitting the holiday music. 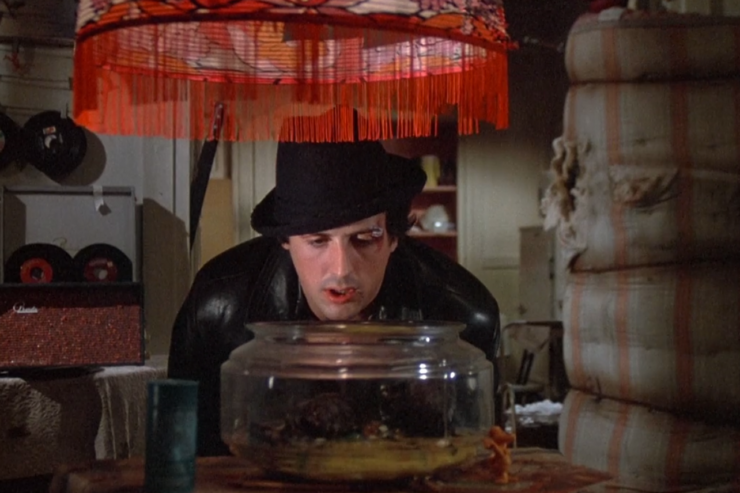 Why it’s on the list: Flying turkeys and iconic lines.

At first, a boxing movie doesn’t seem like it screams Thanksgiving, but the classic American film has two noteworthy bits you’ll want to watch after your own feast.

The first is when Rocky and Paulie visit the latter’s sister while she’s cooking for the holiday. Paulie forces Adrian into going on a date with Rocky. How forcibly? Well, he tosses her turkey out the window.

The second holiday reference is the discussion the two end up having:

Rocky: Yeah, to you it’s Thanksgiving; to me it’s Thursday.

Which is moment is more legendary is entirely up to you. 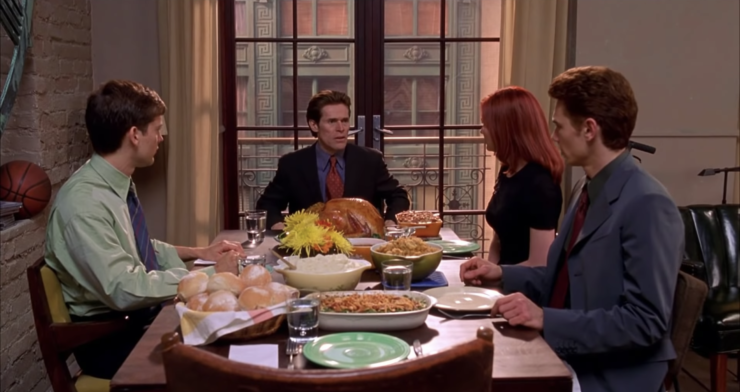 Why it’s on the list: Who can’t relate to feeling like you should have chosen another dinner to attend?

Here’s another unexpected pick. While most of Tobey Maguire’s Spider-Man doesn’t take place of Turkey Day, a major turning point does happen while Peter Parker, friends, and Norman Osborn a.k.a. Green Goblin sit around the dinner table.

Here, Peter arrives to the celebration late and donning an all-too noticeable cut. Norman is quick to notice it’s in the exact same spot he cut Spider-Man, thus revealing Peter’s true identity. Hey, Spidey- could you pass the gravy? 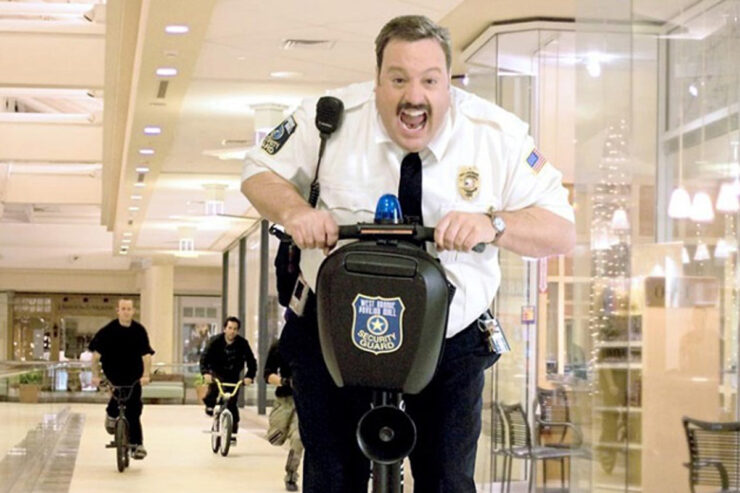 Why it’s on the list: The craziness that is Black Friday is exposed to hilarious effect.

What’s the first thing you’re going to do once your food digests? Black Friday shopping, of course. The unofficial, consumer-friendly holiday is the evil twin of its immediate predecessor.

Pop on Paul Blart: Mall Cop to mentally prepare for long lines and crazy shoppers. The film’s entire premise centers on Black Friday and will be sure to get you geared up for extreme bargain hunting. 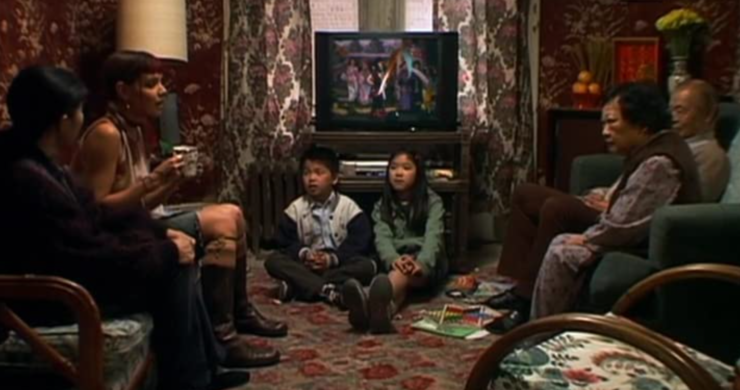 Why it’s on the list: Dysfunction family reunites on Thanksgiving—the epitome of the holiday itself.

The holiday wouldn’t be complete without family drama and Pieces of April is full of dysfunctional family relationships. In it, Katie Holmes plays April, the antithesis to her peppy Dawson’s Creek role, who decides to invite her family over for Thanksgiving after finding out her mother (played by Patricia Clarkson) has terminal cancer.

You’ll have to watch this one yourself to see if there’s a happy ending to the drama. 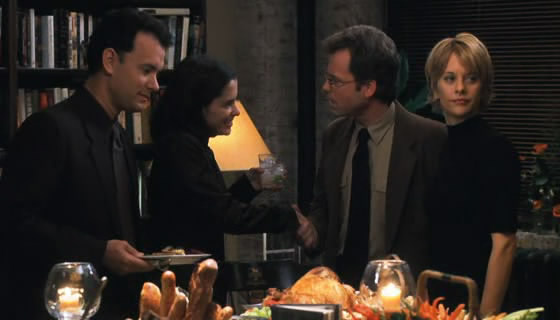 Why it’s on the list: It’s a perfect ’90s romantic comedy and full of vibrant the autumnal scenes.

Tom Hanks and Meg Ryan’s cherished ’90s rom-com opens in the middle of fall in New York City. Residents put away pumpkins, and trees with changing colors line the streets. Joe (played by Hanks) even has a brilliant and well-timed line.

“Don’t you love New York in the fall? It makes me wanna buy school supplies. I would send you a bouquet of newly sharpened pencils if I knew your name and address.”

The American classic does have a Thanksgiving scene in which Joe ends up saving the day when Kathleen (Ryan) enters a cash-only lane without any cash. The grocery scene encapsulates the hustle and bustle and stress of holiday shopping.

Of course, none of this compares to the beautiful autumnal backgrounds or to the love saga between the two characters. That should be enough to satiate anyone’s heart.

Why it’s on the list: Watch for feel good family vibes and a burgeoning romance.

Dan in Real Life is one of those movies that isn’t a holiday movie, per se, but it should be. Its premise is simple. Dan Burns (Steve Carell) is an advice columnist and widower with 3 young girls. Dan may be giving advice but, with his own life on autopilot, he’s the one who needs a pep talk.

Then comes along an intriguing woman, Marie (Juliette Binoche), but their one encounter goes nowhere, and the two don’t meet again until the Burns family reunites for their annual family gathering and Marie is there as the girlfriend of Dan’s brother (played by Dane Cook).

So, what makes this film optimal for Thanksgiving? Steve Carell’s comedy-drama has the makeup of the perfect holiday flick: large family get-together, gossip, and all-around laughs with the people who mean most. It’s perfect viewing for the family that’s less dysfunctional and more unconventional. 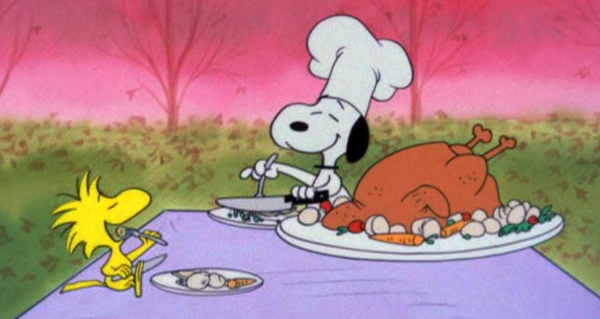 Why it’s on the list: It’s THE Thanksgiving Classic.

For a classic time, watch the best and most beloved Thanksgiving movie of all time: A Charlie Brown Thanksgiving. The family-friendly cartoon features all the hallmark touchstones Americans have come to love and expect on the last Thursday of November.

Watch the Peanuts pass the time leisurely while Snoopy and Woodstock prepare a delectable feast. Giggle at Lucy pranking Charlie Brown with the football. What’s not to love?

The only thing better than rewatching the holiday staple is rewatching it with a slice of pumpkin pie in your lap.

What do you think is the best Thanksgiving movie? Is there any on our list you plan on watching? Let us know in the comments, and don’t forget to Let Your Geek Sideshow!

New Photos of Batman, New Photos from WandaVision, and more!