Susan and Kitty are diving into the legacy of the Dark Knight- an 80 year history with DC Comics!  Get a glimpse behind the cape and cowl as we talk humble heroic beginnings to pop culture status of mythic proportions- this is Batman Then & Now! 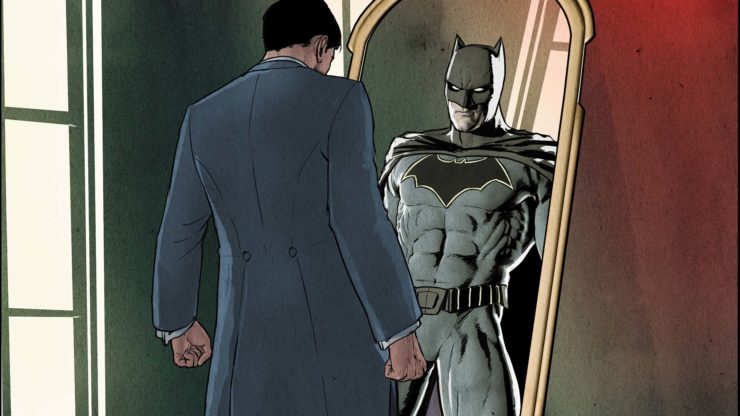 How do you define something that is indefinable? You look to the people, places, and things that make that person tick and learn from them. Oddly enough, the character we are describing is the very same one who taught us that idea.

Batman has been the quintessential pop culture icon for the past 80 years, so much so that he has become the modern myth of our time and everyone wants to contribute to that myth, including us!  Everyone knows who Batman is- even the least geeky among us recognize the bat-symbol that adorns so much merchandise and iconography of our modern landscape.  But does everyone know why Batman is?

And how do you keep a character evolving and changing for 80 years of storytelling across comics, movies, games, and books?  As DC Comics proves time and again, there’s still stories to be told starring the Bat.  March 30th officially commemorates 80 incredible years of Batman in comics.  So listen along as we discuss just what it takes to turn a comic book character into a cultural titan, and raise a glass to 80 years of the Caped Crusader!  Here’s to many more!

If you are interested in celebrating Batman‘s 80 incredible years of pop culture history, check out these sources:

Seriously, there’s Batman everywhere you look.  It’s not hard to find a Batman adventure to fall in love with- what’s your favorite?  Let Your Geek Sideshow and tell us in the comments below!

We are proud to bring you pop culture content completely AD FREE, but that doesn’t mean we don’t need your support to help keep us going. If you enjoy Then & Now, please take a moment to leave us a 5-star review on iTunes, Spotify, or your favorite podcasting platform and help spread the word about our podcast.

Be sure tune in for our other pop culture podcasts: Take a peek into geek culture and check out our Top 10 fandom favorites in the Geek Culture Countdown. Hear exclusive interviews with celebrities and pop culture industry leaders as they let their geek side show in Look Who Showed Up. Then, get all the latest pop culture news with our Daily Briefing, a two-minute breakdown of the biggest geek headlines perfect for your Alexa or Google news briefings.

Tarantino Debuts Once Upon a Time in Hollywood Trailer, Scooby Doo Reboot Finds its Daphne and Fred, and More!