Harry Potter has no shortage of heroes. Harry Potter himself, plus Hermione Granger and Ron Weasley, make up the intrepid Golden Trio. But these three Hogwarts students are all Gryffindors, decidedly the bravest and most innately heroic of the bunch.

So what about the other Hogwarts Houses’ heroes? Well, there’s Luna Lovegood in Ravenclaw. Arguably there’s Draco Malfoy in Slytherin. And with the release of Fantastic Beasts: The Secrets of Dumbledore, we’re getting our final journey with the Hufflepuff protagonist Newt Scamander. But one Hufflepuff hero came before this famed Magizoologist, and that’s Cedric Diggory.

Cedric Diggory had a brief and tragic role in Harry Potter and The Goblet of Fire. Nonetheless, Robert Pattinson’s (Tenet, The Batman) portrayal of this teen stood out in the film adaptation. He was in very few scenes, and barely spoke, yet his impact and screen presence were undeniable. So below, let’s remember Cedric Diggory by breaking down his best quotes in the Goblet of Fire movie.

“About the badges. I’ve asked them not to wear them.” 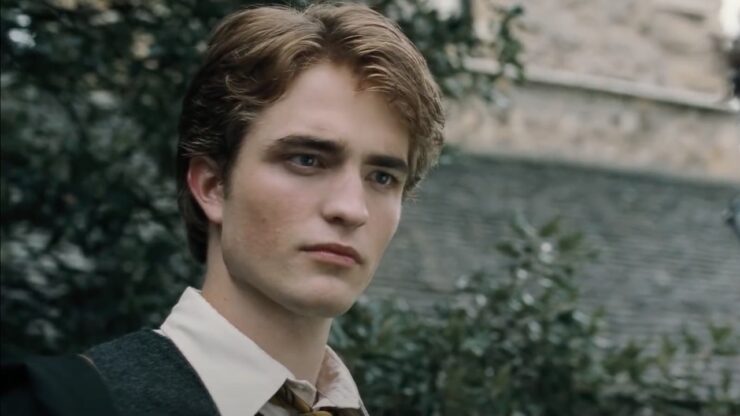 There’s can only be one Triwizard Champion from each participating Wizarding school. Yet inexplicably, both Cedric and Harry’s names are drawn from the Goblet of Fire. Harry is also underage, meaning he should be doubly disqualified. Yet he’s magically contracted to participate due to Wizarding traditions, so he joins the now-quartet of potential champions.

In protest, Hogwarts students create badges that read “Cedric Rules / Potter Stinks.” When Harry speaks to Cedric about an entirely different topic, Cedric still makes sure to apologize about the rude slogan. This demonstrates Cedric’s good heart and compassion, qualities expected of yet not necessarily found in every single Hufflepuff.

“Just take your egg and mull things over in the hot water.” 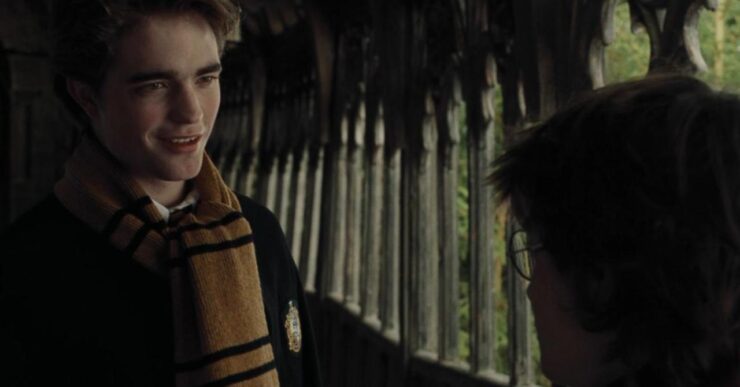 As a thank you for tipping him off about the dragon challenge, Cedric gives Harry a hint about unlocking the golden eggs. Whereas Harry was straightforward about the first task, Cedric is far more subtle. Perhaps bordering on nonsensical. Nonetheless, his suggestion that Harry bring the egg to the large bath is well meaning. Without his kindness, Harry likely would have been at a great disadvantage during their adventure in the Great Lake. 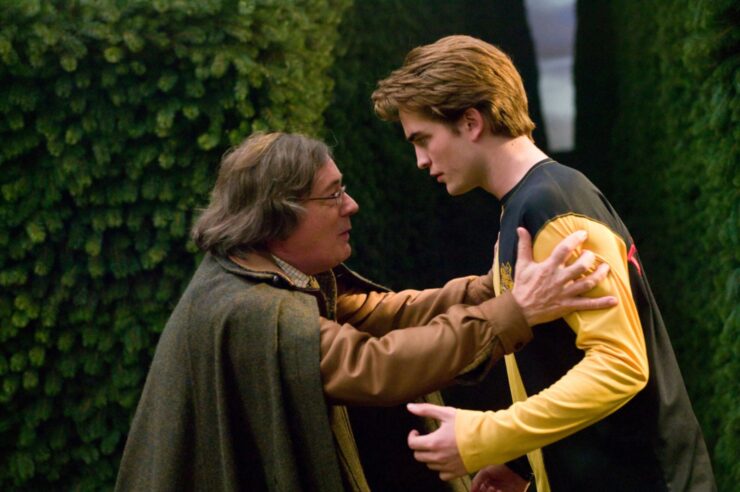 This is perhaps Cedric’s saddest quote. Before walking into the final task, a treacherous magical maze, Cedric bids farewell to his father Amos Diggory. The pair don’t realize it’s the last conversation they will ever have. Thus the exchange is brief yet heartfelt, sincere yet casual. Cedric thinks he has all the time left in the world, so why would he wax poetic? The Diggory family plans to celebrate Cedric’s win later, not mourn Cedric’s death. And thus in retrospect, Cedric’s “see you later” is heartbreaking.

“For a moment there, I thought you were going to let it get me.” 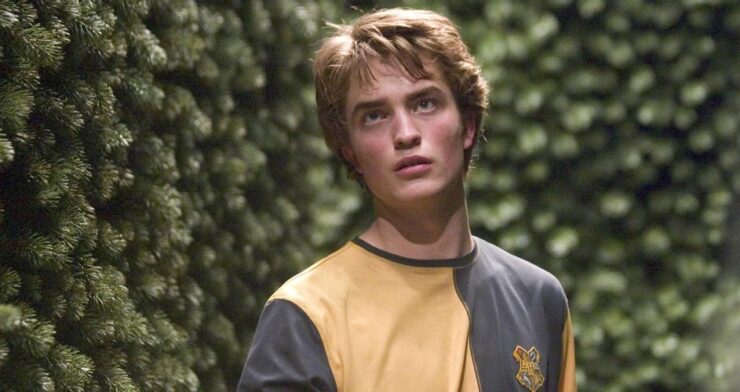 Hufflepuffs are all about direct communication. We see a lot of that in Newt Scamander’s blunt interactions with the other witches and wizards. In Goblet of Fire, Cedric faces some seriously deadly challenges because of the Triwizard Tournament. One is a maze that twists people’s minds, feeding off their greed and selfishness and exacerbating their negative emotions. While this mental game is happening, there are also smaller physical obstacles such as moving hedges (plus a Sphinx, but that was only in the books).

In one instance, Cedric is nearly encased into the maze wall by a host of vicious vines. Harry saves Cedric from this fate. Then when they’re both stable, Cedric admits he had his doubts Harry would help. This does not offend Harry at all. In fact, the honest conversation seems to bring them closer together as they confirm one another’s trustworthiness. 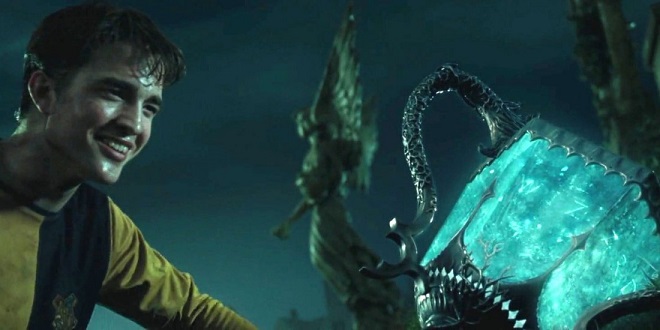 Oh, Cedric. Ever generous and ever fair. After Harry saves Cedric from a gnarly maze obstacle, they find the Triwizard Cup together. Whoever touches the Cup first, of course, wins the Tournament. But Cedric can’t take it, feeling he owes Harry the victory for saving him. After all, Harry would have won had he not stopped to help. 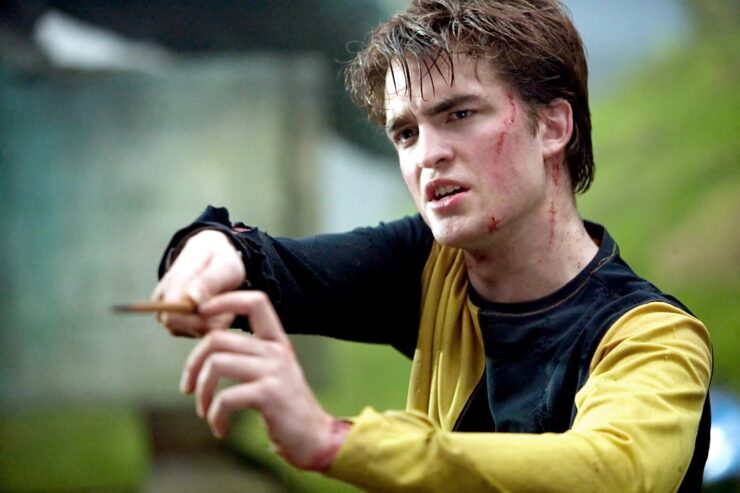 Now this is just iconic. The Triwizard Cup turns out to be a portkey, which is an ordinary object enchanted to transport people across great distances. Cedric and Harry thus land in a graveyard far, far away from the Hogwarts grounds. At first they’re impressed by the Tournament makers’ ingenuity. Sadly, things take a darker turn from there.

Wormtail arrives carrying the feeble physical body of Lord Voldemort. And then Cedric has the nerve to ask the greatest dark wizard of all time who he is. Voldemort declines to answer, instead having Wormtail murder Cedric. But what a way to go, completely invalidating the name and status of a villain who thrives off absolute power, control, and recognition.

“Take my body back to my father.” 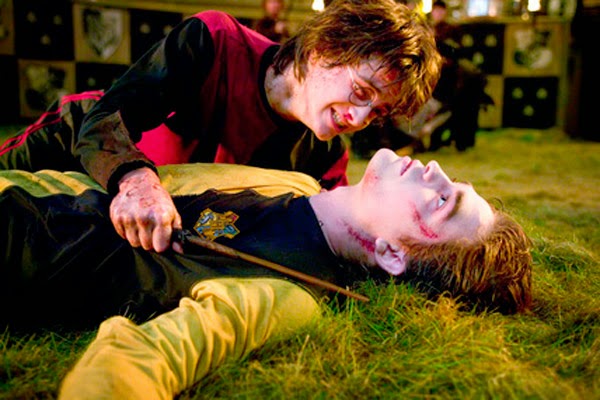 This quote is certainly a sad one to end on, because these are Cedric Diggory’s last words. While Harry Potter duels Voldemort in a graveyard, Cedric’s corpse lies by the portkey, both discarded as useless objects by the Dark Lord. But then Harry’s spell does something extraordinary.

When Harry and Voldemort’s twin wand cores meet, the magic rebounds. All the people Voldemort has killed with Avada Kedavra appear as ghosts around Harry Potter. Most interestingly, they are capable of speech. Harry’s parents, James and Lily, encourage Harry to keep fighting. Cedric, meanwhile, shares his last wish. Fortunately Harry honors that request when he escapes the graveyard.

What’s your favorite Cedric Diggory quote from Harry Potter? Let us know in the comments, and don’t forget to Let Your Geek Sideshow!