The Netflix Marvel television shows are often considered some of the best Marvel television of all time. Comprised of Daredevil, Jessica Jones, Luke Cage, Iron Fist, The Defenders, and The Punisher, these Netflix series deal with darker and far more grounded super hero stories.

As they make the small screen leap from their original streaming platform to Disney+, we are looking back on some of the greatest moments from these shows that center around their protagonists. Join us below to see if you agree with our list. 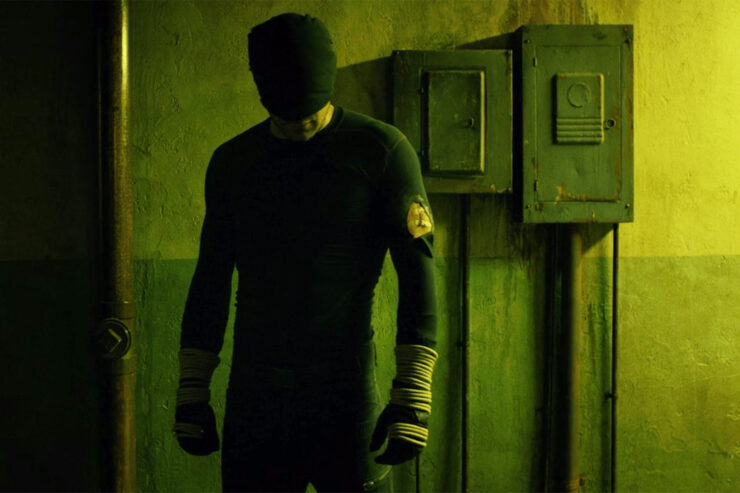 Often lauded as the paragon of fight scenes, the “Daredevil hallway fight” instantly comes to mind as a top Daredevil moment. At this point in the show, Matt Murdock still hasn’t donned his signature red armor. He’s got a black suit and ropes tied to his fists and arms, and he’s half a second away from passing out. Even with the evident exhaustion, and even though he’s completely outnumbered, Matt fights with everything he has — and then some. This scene is made even cooler by the fact that it’s a one shot, meaning the camera films continuously and never cuts until the sequence is complete. 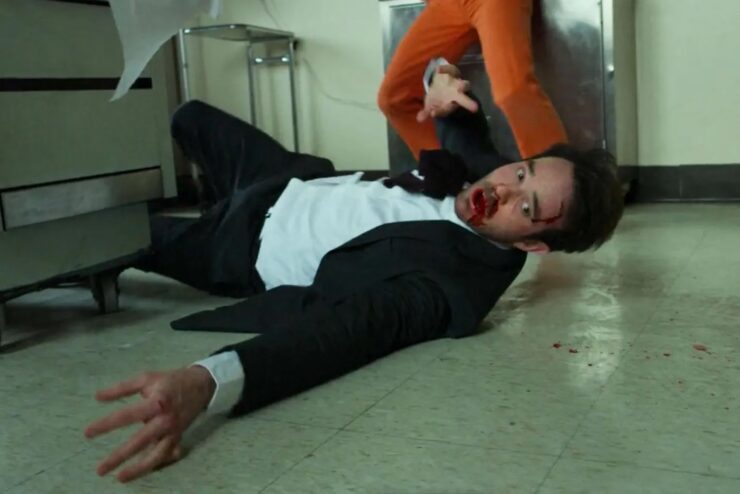 Netflix elevates their game in Daredevil season 3 with an epic 11-minute one shot. Technical brilliance aside, it’s also an incredible Matt Murdock moment. He’s in his civilian clothes and did not arrive at the prison as Daredevil, but rather as his lawyer self. Ultimately, he still ends up battling his way out of the high-security building. Again, Matt is stunningly outnumbered and more tired by the minute — but it doesn’t stop him from escaping in a taxi to continue his fight yet another day. 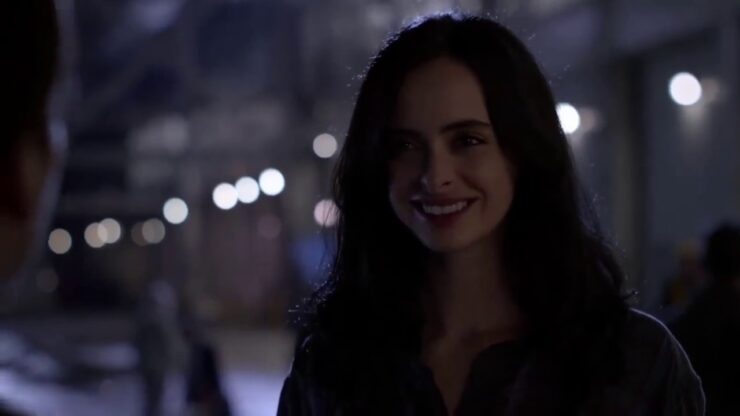 Jessica Jones spends her first season plagued by a villain named Kilgrave. Kilgrave possesses powers of suggestion, allowing him to take over the minds of individuals with only his voice. He uses these powers to abuse Jessica physically, emotionally, and psychologically. In the Jessica Jones season 1 finale, all hope seems lost as Jessica seemingly falls under his influence once more. Thankfully, Jessica has fooled everyone. When Kilgrave tells her that he loves her, Jessica replies “I love you” to Trish Walker instead. Then she snaps Kilgrave’s neck. 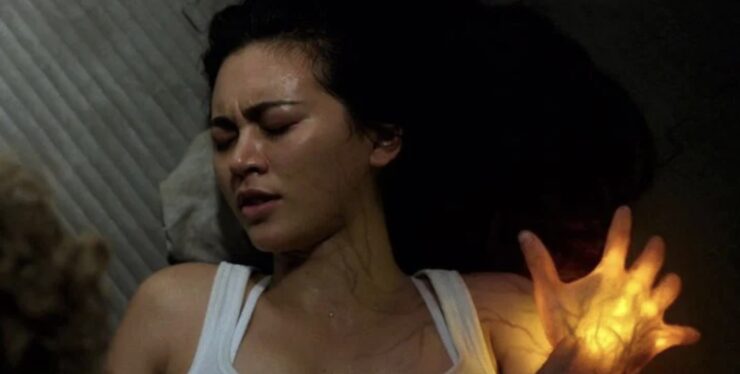 As the name implies, Iron Fist has extremely powerful hands. Depicted with a glowing gold energy, Danny’s fists can inflict a lot of damage and even control bullets. So when Danny uses his skills for healing, it’s much more significant than his many fights and mega-powered punches. After Colleen is poisoned with a tainted blade, Danny is at a loss for how to save her life. Colleen’s mentor Bakuto swoops in and tells Danny that the Iron Fist can be used to heal. All Danny has to do is channel his chi and draw the poison out, which Danny subsequently — and successfully — does. 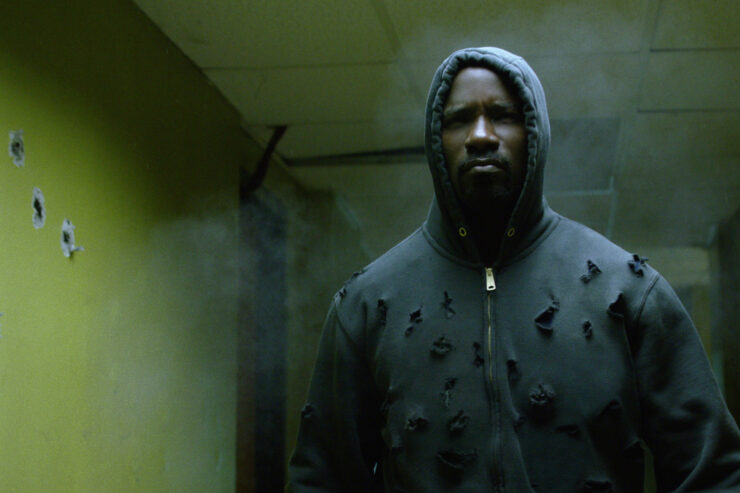 The image of the bulletproof Luke Cage, hoodie riddled with bullets holes yet body untouched, is striking, and meaningful, on many levels. Thus the scene from where this image comes has to be mentioned. In Luke Cage season 1, Luke raids the Crispus Attucks building as a clear move against Harlem’s king, Cottonmouth. Luke fights his way through over two dozen lackeys in various environments, from stairs to hallways to empty rooms. He also uses things like a car door and a full size sofa as weapons. All the while, Wu Tang Clan’s “Bring Da Ruckus” plays to emphasize an important point: While Luke has brought chaos to Cottonmouth, he intends to leave with Cottonmouth’s chaos subdued.

This is the moment we’ve all been waiting for! Finally, all four of the Defenders meet. After each of their own investigations and motivations leads them to the same building, the four heroes form an unsteady alliance as they have to decide to trust each other rather quickly. Although a few members of the group already know each other, it’s great to watch the shift in power dynamics and skill levels. Even their methods change as they learn to work together. Their banter is the cherry on top — after all, they’re all on their “Worst Behavior.”

Danny and Luke Team Up 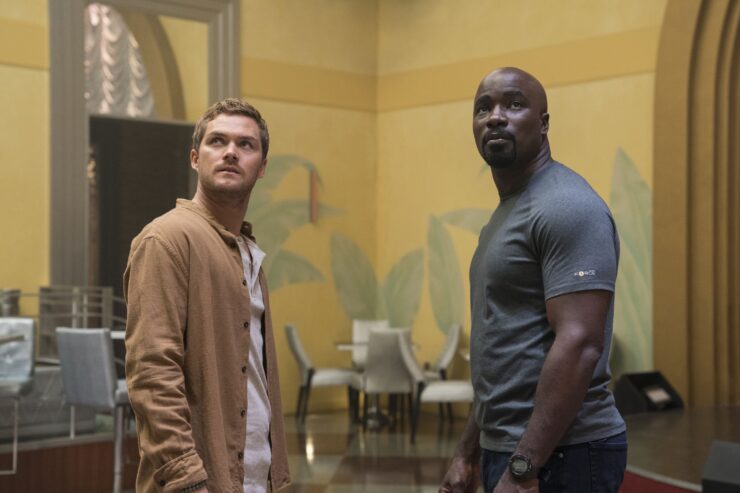 Power Man and Iron Fist are an iconic Marvel comics duo. Their team up in Luke Cage season 2 is a huge payoff for comic fans who can’t get enough of their dynamic. Plus, after the events of The Defenders, it’s nice to know these heroes are still looking out for one another. Luke and Danny get into some shenanigans, most notably a warehouse fight where Luke actually tosses Danny at a group of adversaries. In the end, the two men are also there for each other as friends who sit in a park and talk about their feelings together — which is just as important as the action scenes. 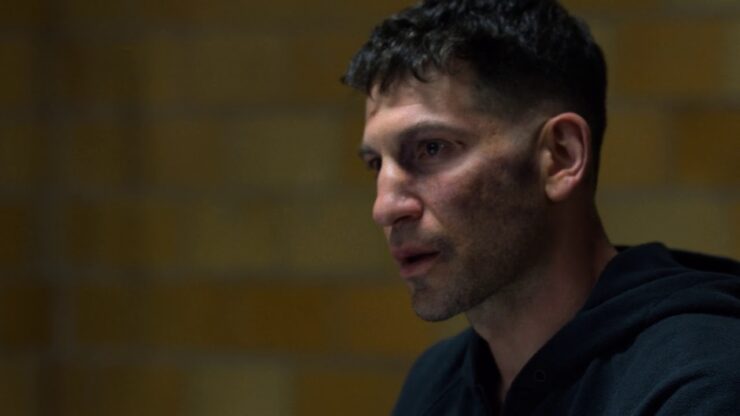 The big bad Punisher is known for his lethal methods. Violent, skilled, and always waging his new battles, Frank Castle spends most of his solo series covered in blood or planning to execute some sort of injury upon those who have wronged him. That’s why this quiet moment in The Punisher season 1 finale is so important. Finally participating in PTSD group therapy, Frank monologues about no longer having a war to fight. He admits he’s scared. The tonal shift, as well as the character growth, makes it a standout scene not only in The Punisher, but throughout all of the Netflix Marvel TV series.

What are your favorite moments from Marvel’s Daredevil, Jessica Jones, Luke Cage, Iron Fist, The Punisher, and The Defenders? Let us know in the comments, and don’t forget to Let Your Geek Sideshow!