DC Comics’ Peacemaker, an HBO Max original series created by James Gunn, is a smash-hit super hero story that defies most of its genre expectations. Raunchy and raucous, Peacemaker features a team of capable to largely inept task force members who must fight against an alien invasion. And at their core is their dashing leader and the series’ protagonist, Eagly (Dee Bradley Baker).

Weird for this DC Comics show to be called Peacemaker when the main character isn’t even Peacemaker / Christopher Smith (John Cena), right? We think so too. To honor our fowl friend, we’ve compiled a list of his best quotes from all eight episodes. Check ’em out below. 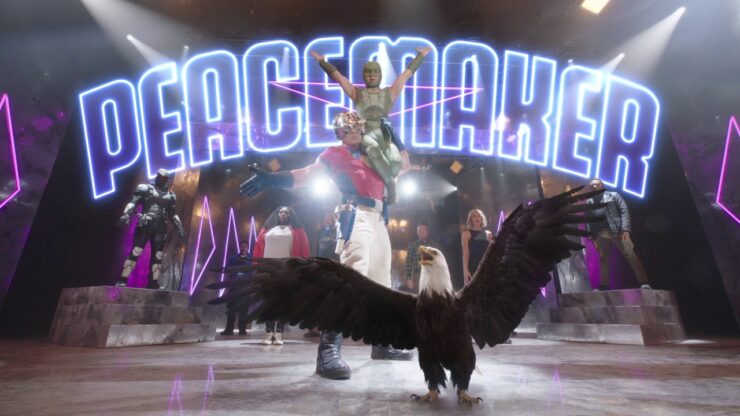 Our first Eagly quote actually comes during the Peacemaker intro. While the humans finish their strange dance, Eagly watches and waits. Finally — his cue. Eagly swoops in to the front of the frame like the protagonist he is. He utters a screech, but the “continues screeching” quote is the most important here. Here Eagly is roused by his compatriots’ fervor, expressing similar excitement to have the show begin. 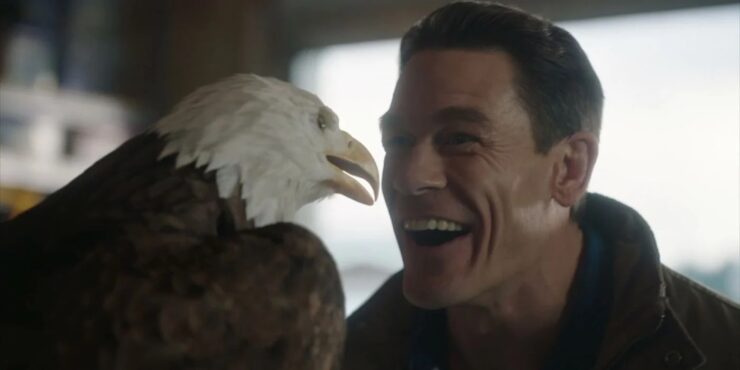 After spending years cooped up in a garage, Eagly finally reunites with his best pal Chris. This scene is just as heartwarming as you’d expect. And this quote definitely pulls hard on our heartstrings. After a few initial greeting screeches, Eagly changes to chattering. He and Chris simply … catch up. And suddenly it’s like only seconds have passed since their last talk, not years. That’s the power of true friendship right there. 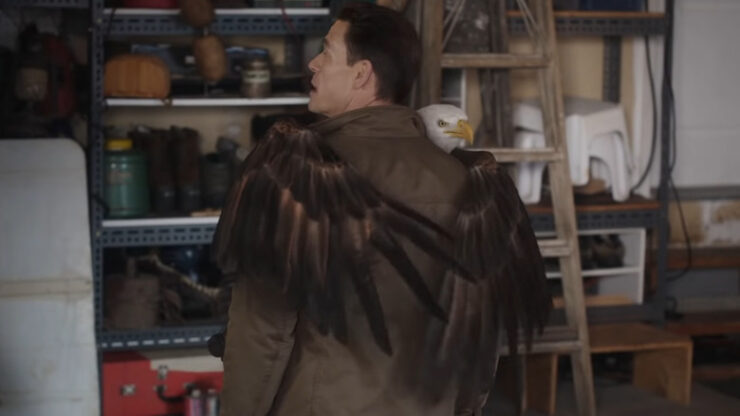 Eagly and Chris’ catch-up chat becomes a proper reunion once Eagly spreads his wings. Resting his head on Chris’ shoulder, Eagly wraps those beautiful feathers around Chris’ back. They hug. And then Eagly utters such a comforting quote that we’re sure you all had tears in your eyes. We sure did.

Eagly’s pal Chris escapes from an apartment complex. Chris could have just stayed and enjoyed Eagly’s possum dinner with him so, like, he had it coming. But still, Eagly supports his BFF and follows his commands. Amid a whole lotta gunfire and noise, Chris parkours off a few floors and runs to a getaway car. He calls Eagly. And Eagly, brave and loyal as ever, flies to safety. But he can’t resist complaining a bit about the completely avoidable circumstances. 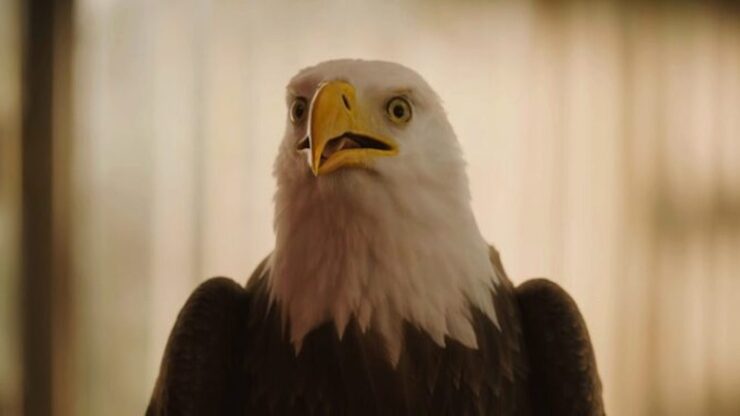 When Chris is in a slump, and no one else is there for him, Eagly is there for him. Granted, they live together, but Eagly could fly away whenever he wants! But no, he stays. He witnesses Chris’ downward slide into overwhelming sadness. Instead of just leaving him to his own raw egg drink devices, Eagly shows he cares. He talks to Chris, offering squawks of condolence. Without Eagly, Chris may have never moved on from this defeat.

“Stop Dragon My Heart Around”

Another screech, but this one is a battle cry! Our patriotic protector swoops in to save his friends from white-hooded antagonists. After pecking, beating, and talon-ing White Dragon’s (Robert Patrick) goons, Eagly even goes for the super-villain himself. This screech comes from the heart. It’s a warrior’s screech. While the resulting fight lands Eagly in the hospital, this quote is still incredibly inspirational.

“Stop Dragon My Heart Around”

After his beak/face off against White Dragon, Eagly is rushed to the veterinarian. There he undergoes surgery for his wounds. Lying in a coma, he is cared for by Chris. And when he wakes, he certainly acknowledges that he and Chris both would have lost something precious had Eagly not awoken. Eagly therefore embraces Chris for the second time during the series. And this time, they get pictures.

It’s a repeated quote, we know. You’ll have to forgive the fella, because he has a limited vocabulary. And in any case, this chattering quote is completely different from the first one. While it’s still conversational, Eagly’s audience is more like … well, the audience. Eagly is talking to Chris as well as the viewer about the events that have just transpired. Mainly they’re chatting about dinner and Auggie’s ghost. Pretty good things to discuss ASAP, in our opinion.

What’s your favorite Peacemaker quote by Eagly the Eagle? Let us know in the comments, and Happy April Fools’ Day!