Whether you love or hate him, you have to admit Kylo Ren™ has some great quotes. Let’s look at his 5 best from the Star Wars™ sequel trilogy.

“Forgive me. I feel it again. The pull to the light.”

From his introduction, Kylo Ren is immediately compelling. Other characters hint that he’s related to the Skywalker™ family, but we don’t know exactly how. We also don’t see his face. He’s an anonymous monster, striking down innocents and rebels alike. Of course, we are then reminded of Darth Vader™ in Episode IV. Our own dot-connecting pays off when Kylo seeks counsel with his grandfather’s burned helmet.

Kylo Ren essentially worships Darth Vader. The helmet is an idol to his role model, a symbol of his beliefs. Thus it intrinsically connects him to the dark side through a strong emotional attachment — something once forbidden by the Jedi™. Unfortunately for Kylo, Darth Vader did turn back to the light in the end, so this initial quote seems a bit misguided. Until, that is, we look at the bigger picture of the whole trilogy, recognizing the foreshadowing of Kylo’s own heroic arc.

“Your son is gone. He was weak and foolish like his father. So I destroyed him.”

Kylo Ren cannot cope with his family ties. He hates who he used to be. Additionally, he thinks the light side is full of inept, weak-minded fools. While this is a pretty extreme viewpoint, we have to remember Kylo Ren is a stubborn and angsty teenager who was bound to rebel against his parents — Han Solo™ and Leia Organa™ — at some point. He just did it in the most melodramatic way possible.

Also, if this idea sounds familiar, that’s because it is. In the Obi-Wan Kenobi™ television series, Darth Vader expresses similar sentiments. He insists that the one who truly killed Anakin Skywalker™ was Vader — his new, supposedly stronger self. Obi-Wan Kenobi™ uses the same logic in A New Hope™ when discussing his apprentice’s death with Luke Skywalker™. If we combine this with how much Kylo Ren worships a distorted concept of his grandfather, the filial parallels are simply exquisite. 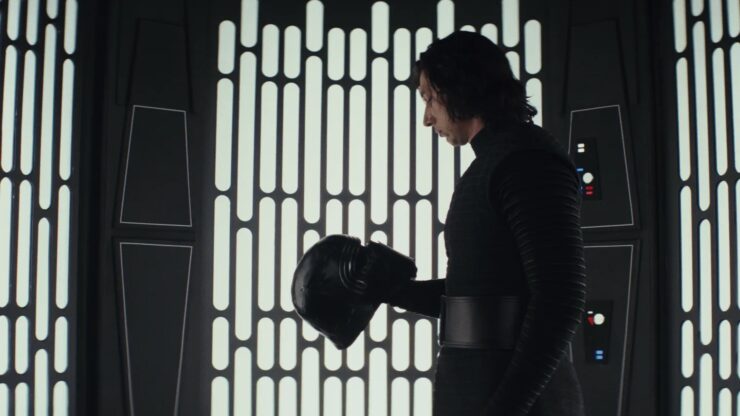 This is, undoubtedly, Kylo Ren’s best quote in the entire saga. Here he urges Rey™ to move forward with her life. Kylo Ren wants her to shirk old alliances and bloodlines to become her own person. “It’s the only way to become what you were meant to be,” he continues. This references his own transformation from Ben Solo into Kylo Ren.

Later, however, Kylo Ren embraces his past and his family. He settles into his role as a true hero and Skywalker. Sometimes you have to admit you were wrong and return home. Yet the intention to move on from the past and embrace a new, self-made identity is nonetheless admirable. And arguably, the Ben who denies the dark side in Episode IX is as self-made as he can be.

Again, we have this theme of holding on versus moving forward with Kylo. The above quote further exemplifies his struggles between past, present, and future. Once again, he refuses his ties to the people who tried to mold and control him. Kylo can’t understand why Rey grasps so tightly at ideals that mean nothing to him.

In many ways, these words are also rather meta. They urge Star Wars fans to embrace stories beyond the Skywalkers and the Sith™. Although criticized heavily, The Last Jedi attempts to subvert many of the expectations we hold for the franchise. Whether it succeeds — and whether these words resonate — well, that’s up to your individual opinion.

Star Wars: The Rise of Skywalker™

Oh, this one just hurts. In case you don’t rewatch the Star Wars movies so much you’ve memorized them, this is Kylo Ren’s quote from Episode VII that precedes a shocking patricide. After nearly dying in Episode IX, however, Kylo recalls this interaction with Han Solo. And he imagines things going a lot differently.

In The Force Awakens, Kylo Ren believes his strength comes from anger, suffering, and pain. The dark side is a weapon which harms his victims, sure, but also him. On the other hand, in The Rise of Skywalker, Kylo Ren finally understands that he must be strong enough to heal from his hatred. It takes a lot to step out of the fog of any emotion, be it sadness, rage, or heartbreak. Yet with a little guidance from his dearly departed dad, Ben Solo finds hope once more.

What are your favorite Kylo Ren quotes? Connect with other Star Wars fans at side.show/geekgroup, and don’t forget to Let Your Geek Sideshow!