With many movies and television series taking place in a galaxy far, far away, Star Wars™ has no shortage of inspiring female characters. From Leia to Ahsoka to Cara Dune, the women of Star Wars inspire audiences far and wide with both their actions and their words.

They each possess their own unique strengths and abilities, all of which shine through in some of their most iconic quotes. Here are our top 10 quotes from the women of Star Wars.

10. “Unless you want to go another round, one of us is going to have to leave, and I was here first.” – Cara Dune™, The Mandalorian™ 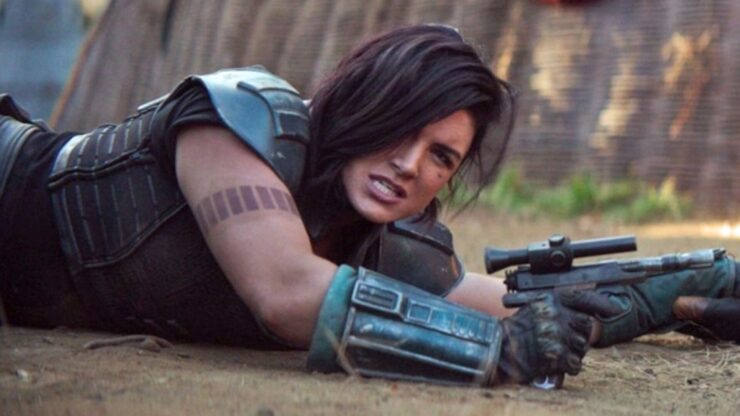 When Din Djarin™ and Grogu™ arrive on Sorgan™ and head to the Common House for something to eat, Din spots Cara Dune and asks the woman in charge what she knows about her. The next time Din hazards a glance at Cara’s table, she is no where to be seen. He follows her tracks outside, and as he notes that they suddenly end, Cara swings from above and knocks him down. The two engage in a brawl, both demonstrating their considerable skill in hand-to-hand combat.

After Grogu interrupts their standoff, Cara and Din have a calm conversation over soup. Cara tells Din she is on the planet as a form of early retirement, and politely says, “Unless you want to go another round, one of us is going to have to leave, and I was here first.” Cara somehow manages to be both intimidating and personable in everything she does, and the first of several interactions with Din is no exception.

9. “Dear child, the belonging you seek is not behind you … it is ahead.” – Maz Kanata™, Star Wars Episode VII: The Force Awakens™ 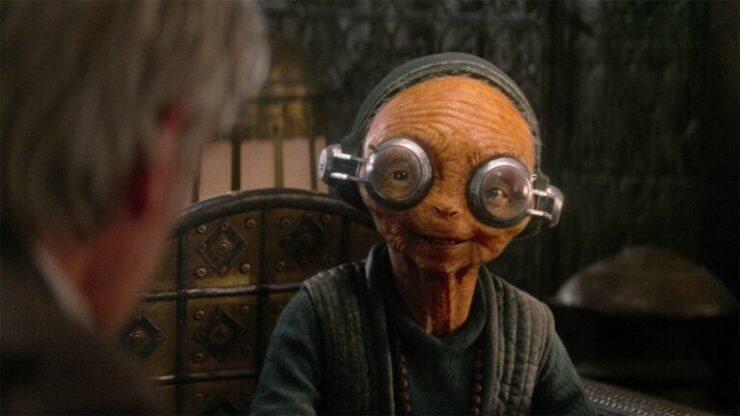 Although she makes her first appearance in Star Wars: The Force Awakens, it is clear that Maz has a long history with Han Solo™ and Chewbacca™, as well as an intimate understanding of the events that took place in the original Star Wars trilogy. After Rey™ has a vision upon touching Luke and Anakin Skywalker’s™ former lightsaber, she tells Maz that she must get back to Jakku™.

Maz empathizes with Rey’s desire to return, but reflects on Rey’s inability to accept that no one will be coming back for her. She tells Rey, “Dear child, the belonging you seek is not behind you … it is ahead.” With a gentle wisdom only Maz could harness, she helps Rey break through her denial and come one step closer to accepting her destiny.

When Qi’ra, Han, and Chewbacca go to Dryden Voss™ under the pretense of delivering coaxium™, Han is confident that their double cross of the head of Crimson Dawn™ will be successful. With his signature smug grin, he tells Qi’ra that they are going to win. Qi’ra sadly reflects on his word, telling him that it is not that kind of game. She tells him, “The object isn’t to win. It’s just to stay in it as long as you can.”

Despite their shared childhoods, Han and Qi’ra’s time apart had led to drastically different views in the galaxy. Qi’ra witnessed the darker parts of the criminal world, having spent years surviving. With her ability to navigate dangerous situations and work with treacherous people, Qi’ra is resilient and realistic. At the end of the day, her primary goal is to just see the next one.

7. “Something inside me has always been there. But now it’s awake. And I’m afraid. I don’t know what it is or what to do with it. And I need help.” – Rey, Star Wars Episode VIII: The Last Jedi™ 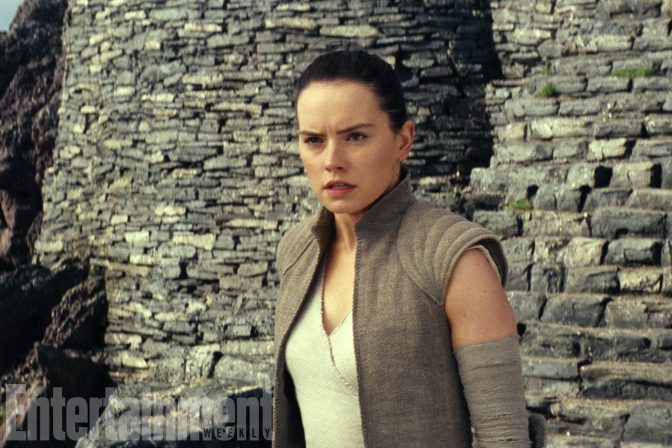 Luke and Rey look at the sacred Jedi™ texts from the Uneti tree™ on Ahch-To™. Luke asks Rey why she is there and she tells him the Resistance needs his help. Luke presses further, asking again why Rey is there. She finally understands what he is asking, telling him, “Something inside me has always been there. But now it’s awake. And I’m afraid. I don’t know what it is or what to do with it. And I need help.”

At the time, Luke tells her that he cannot teach her. Rey persists, and eventually, Luke trains Rey in the ways of the Force. Despite her strength and independence, Rey possesses the humility to recognize that her natural abilities require honing. She knows when she needs help and has the courage to ask for it.

6. “That’s how we’re going to win. Not fighting what we hate. Saving what we love.” – Rose Tico™, The Last Jedi 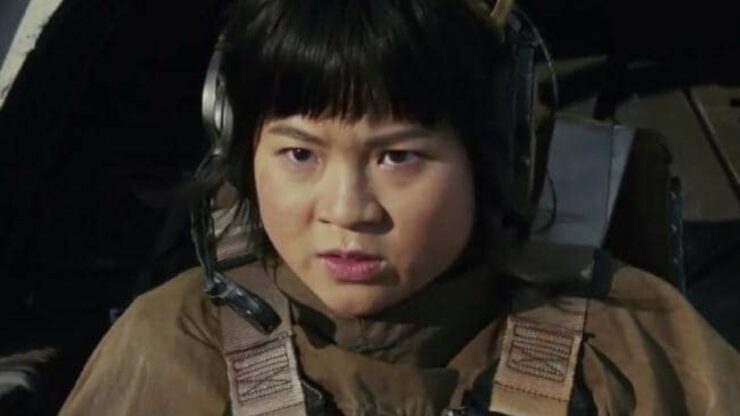 During the Battle of Crait™, Finn™ makes the bold decision to fly his skim speeder™ into the First Order’s superlaser siege cannon to save what remains of the Resistance. At the last moment, Rose drives her own skim speeder into Finn’s. Finn runs to the wreckage of Rose’s speeder, asking why she stopped him. Smiling, she tells him that she saved him, saying, “That’s how we’re going to win. Not fighting what we hate. Saving what we love.” Having lost her sister in the fight against the First Order, Rose knows firsthand that there is more power to be found in love than in hate.

5. “So this is how liberty dies. With thunderous applause.” – Padmé™, Star Wars Episode III: The Revenge of the Sith™

With her leadership and compassionate heart, all Padmé Amidala™ wanted for the galaxy was peace. With Count Dooku™ and General Grievous™ defeated, the war should have ended. However, Chancellor Palpatine™ spins the events that followed to his advantage, declaring that the Republic would become a Galactic Empire for the safety of the galaxy.

The majority of the Senate heartily demonstrated their support for the bold political move. Padmé looks on with shock and horror. As arguably one of the smartest, most observant characters in Star Wars, Padmé saw exactly what was happening. Seated next to an equally stunned Bail Organa™, Padmé says, “So this is how liberty dies. With thunderous applause.”

4. “Whether we fail or succeed, at least our actions will show the Empire and the galaxy that we will not stand down, that we will not be broken by fear, that we are strong, united by our courage.” – Hera Syndulla™, Star Wars: Rebels™ 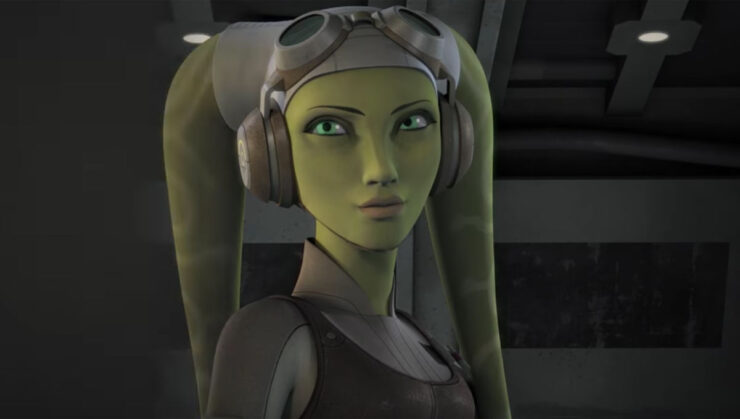 Hera brings incredible value to the Phoenix Squadron as both a pilot and a source of inspiration in both her words and her actions. Despite Rebel leaders’ understandable hesitation to attack to destroy the Empire’s factory on Lothal™, Hera believes that it is the right call. Hera interrupts the Rebel leaders’ meeting to try once again to convince them to attack.

Hera tells them, “Whether we fail or succeed, at least our actions will show the Empire and the galaxy that we will not stand down, that we will not be broken by fear, that we are strong, united by our courage.” Hera’s courage and conviction are unshakeable. She believes in the Rebellion, and believes that some risks are worth taking to stay true to the spirit of the Rebellion.

Following her daring rescue thanks to Luke Skywalker™, Han Solo, and Chewbacca, the group find themselves pinned down by stormtrooper™ fire. As they take cover and try to figure out their next move, Leia decides she has done enough waiting. She crosses the hall, firing the stormtrooper rifle she took from Luke.

Meanwhile, mortified Han asks her what she’s doing. She tells him, “Somebody has to save our skins!” as she returns fire to their enemies. Although Leia can work well on a team, she is a natural born leader and thinks quickly on her feet. When she knows the right thing to do, even under pressure, she does not wait for approval or hesitate to make the bold call. 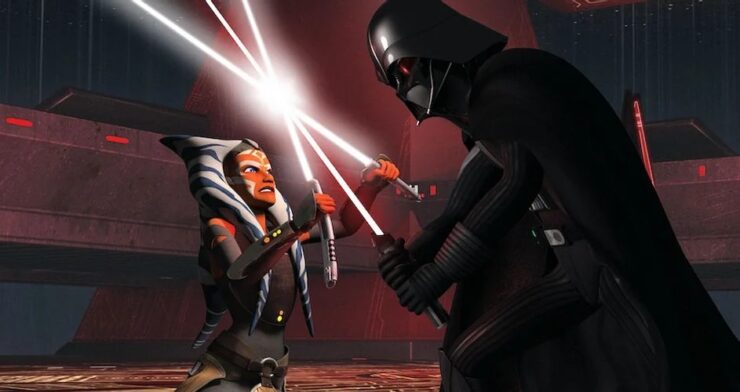 Ahsoka finds herself face-to-face with Darth Vader™ on Malachor™. Ahsoka recognizes that the Anakin she knows is gone as Darth Vader tells her, “Anakin Skywalker was weak. I destroyed him.” Ahsoka says that she will avenge Anakin, and Darth Vader notes that vengeance is not something that Jedi seek. Her voice laden with anger and determination, Ahsoka replies, “I am no Jedi.”

Igniting her white lightsabers, she charges at her former master. Toward the end of the Clone Wars™ she began to recognize the weakness of the Jedi Order™. After feeling personally betrayed by them, she left to forge her own path. No longer hampered by the dogma of the Order, she is able to maintain her connection to the Force while still fighting for what she believes to be right.

Jyn Erso attempts to convince the leaders of the Rebel Alliance to attack the Imperial base at Scarif™. Knowing that her father left the blueprints for the Death Star™ and its intentional design flaw, she believes that this is the Alliance’s best shot to turn the tide in their favor. Jyn can see that this is their best option and delivers a rallying speech.

When one of the leaders clarifies that Jyn is asking them to launch a risky invasion based only on hope, Jyn replies, “Rebellions are built on hope.” Jyn knows the stakes and knows the odds, but still holds on to hope. Although she is unable to gain the support of everyone on the council, Jyn, her newfound friends and a squad of Rebel soldiers lead an attack on Scarif, giving their lives to deliver the plans — and hope — to the Rebellion.

Whether they are pragmatic, courageous, or hopeful, the women of Star Wars reveal who they are and what they stand for with their words and their choices. Their failures and successes serve as lessons and inspiration for all Star Wars fans. With their wisdom and tenacity, they enrich the stories they are in and make the galaxy itself a better place.

What’s your favorite quote from an iconic Star Wars woman? Keep the conversation going over at side.show/geekgroup, and don’t forget to Let Your Geek Sideshow!