While Game of Thrones kept viewers absolutely hooked to television screens with the looming threat of “winter is coming”, Fox has been stringing along X-Men fans waiting for New Mutants for years. TWO long years in fact.

The film’s first trailer dropped in October 2017 just to be rescheduled about one-hundred times. Then, hopeful New Mutant fans were left in limbo when Disney acquired Fox. Would Kevin Feige scrap the superhero-horror film like Marvel had done with the beloved Netflix shows like Daredevil and Jessica Jones?

Well, it looks like we finally have an official green light and will see a release before we all turn to dust. This week, 20th Century Fox released the second, long-awaited trailer for The New Mutants. Naturally, it is time to breakdown the latest trailer for the newest details so stick around while we go scene by scene and reveal the trailer’s significant story elements.

1.) Dani Moonstar’s Faces on the Wall

“What’s the last thing you remember, Dani,” opens the trailer. Dani Moonstar, played by Blu Hunt, is a Native American mutant with the power—or, by the sound of her introduction in this film, lack of power—to create images of people’s worst fears.

Afraid and alone in the dark, she inspects what appears to be blood on her fingertips for a quick moment before faces painted in the same vein as A Nightmare on Elm Street break through surrounding walls to encompass her.

2.) Dani and Her Father Run From a Fiery Attack 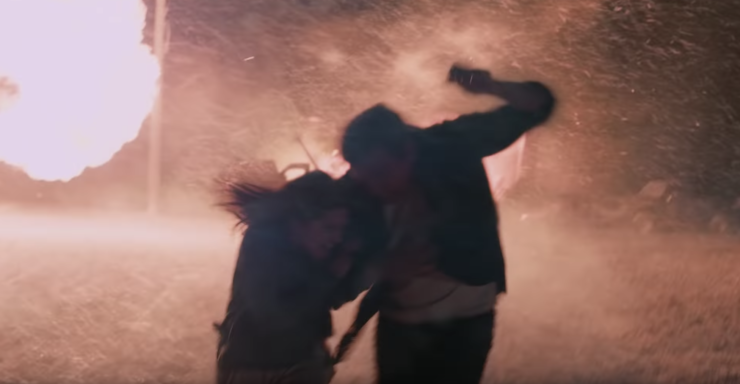 “You said we had to run,” Dani, also known as Mirage, responds to the former question. The clip then goes on to recall Mirage’s own worst fear. A real-life tragedy that still haunts her.

In this flashback, we see Dani and her father running from a gigantic fiery beast. Fans of the comics know this is, in fact, Demon Bear. But we’ll get to this diabolical entity later.

3.) Dani Wakes up Handcuffed to a Hospital Bed 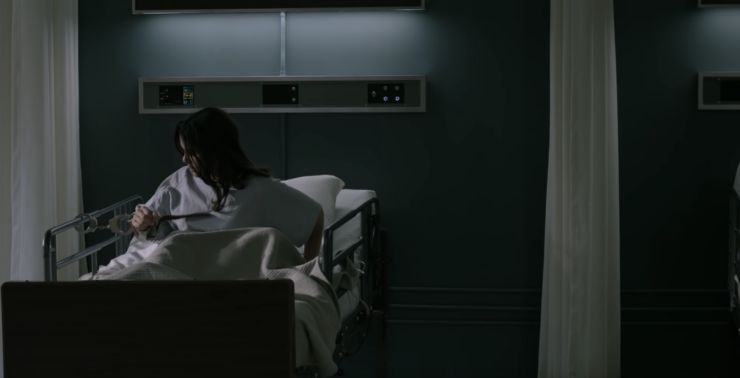 The Nightmare references add one more to the list when Dani seemingly awakes from the tragic dreams. But she’s not in her bed safe and sound. Instead, she finds herself in hospital gown and handcuffed to the bed.

Enter Cecilia Reyes (Alice Braga). Josh Boone, director of The New Mutants, isn’t as interested in keeping Cecilia’s identity true to the comics as he is with Dani. Here, the former X-Men member and doctor with the power to blast protective shields is obviously up to no good. She tells her forced patient that she survived the catastrophe that killed her whole family because she is “uncommon”.

4.) Cecilia Reyes Introduces Dani to a New Institution and Mutants 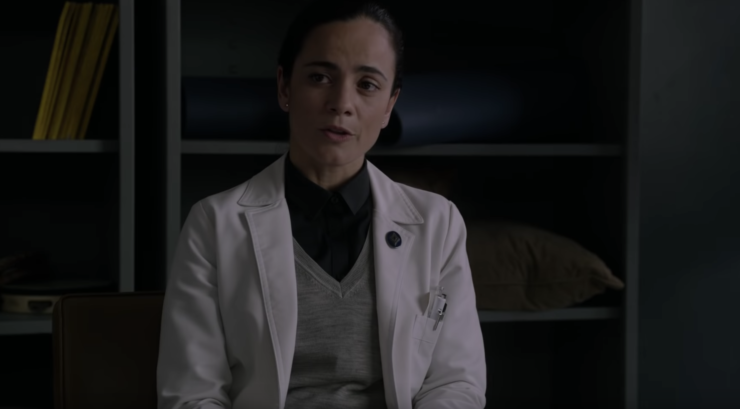 Professor X and Cecilia Reyes both have institutions for mutants but there is obviously something much more sinister in the latter, which is where we find ourselves in this trailer. The doctor introduces her patient to a new set of young mutants, the first Moonstar has ever met. 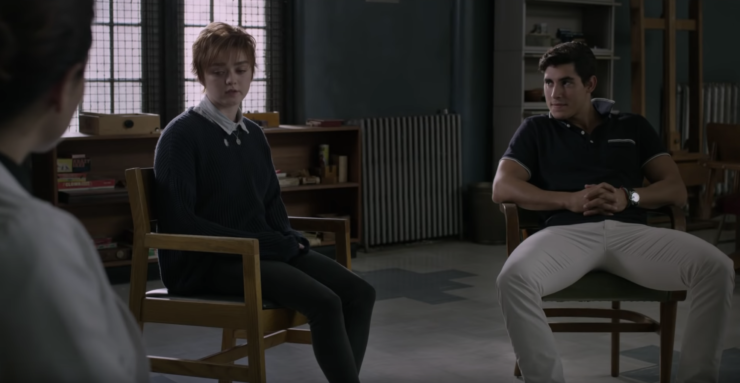 Cecilia and the young mutants sit in a circle. One by one the young adults discuss the first time their powers emerged with the same guilt and shame as an AA confession.

Rahne Sinclair, played by Maisie Williams, tells the group how she lost control. We can see her eyes glowing yellow and her ear morphing into a wolf-like one. The original character, also known as Wolfsbane, is a Scottish mutant with transformative abilities to morph into a werewolf fully or partially.

Sam Guthrie (played by Stranger Things’ Charlie Heaton) then goes on to quickly allude to his first moment with his powers. His, too, were so distressing that we only get a flashback with Sam (superhero alias is Cannonball) breaking down in front of his reflection.

In the group therapy circle, Cecilia moves on to a very preppy Roberto Da Costa (Henry Zaga). Director Boone now paints an eerie similarity with The Grudge. Who doesn’t remember the creepy hand in the shower scene? Well, whatever happened when Roberto’s (also known as Sunspot) powers first emerged, it left him in a pool with his girlfriend’s hand burnt to a crisp. Sunspot can absorb and emulate solar energy, of course.

Illyana Rasputin (Anya Taylor-Joy) is the last and least bashful mutant of the bunch. Colossus’ little sister (known as Magik) nonchalantly reveals her “first time” involved the killing of eighteen people. One-by-one. NBD. Magik’s powers include sorcery and teleportation, as well as the summoning of a weapon called the Soulsword. For an in-depth look at her history, check out Sideshow’s explainer on Magik and her mutant origins.

6.) Dani Finds out This Hospital Is More Like a Prison 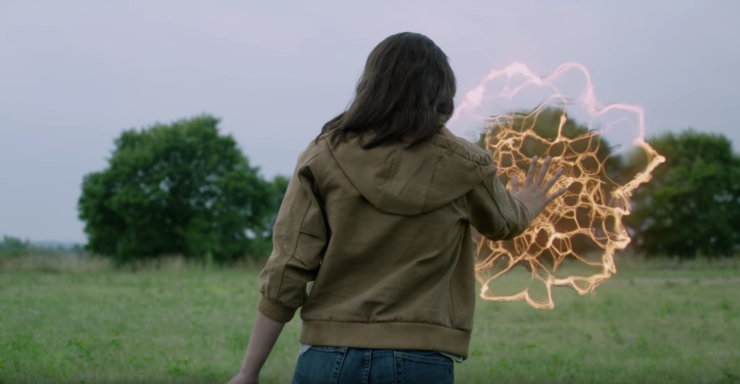 In the next scene, Dani tells her peers she saw something she wasn’t supposed to. It’s a rallying call to escape or fight back. 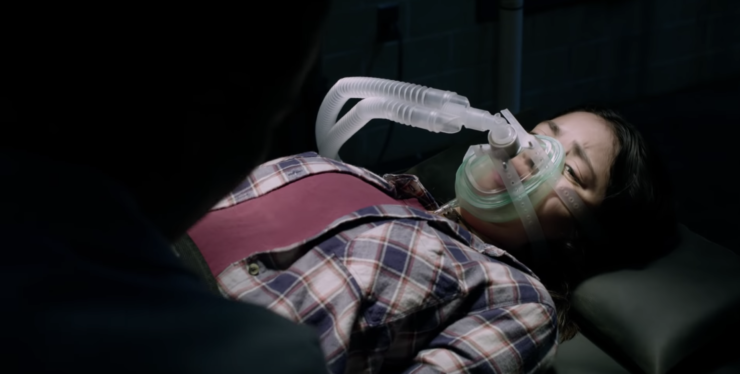 A montage of very frightening scenes ensues. There are more faceless people, dissolving doors, a person dropping from the ceiling like James McAvoy’s The Beast in Glass. Yeah, something is up indeed.

And then there are the worst nightmares of Cannonball and Wolfsbane playing out. We see a mine collapsing and a sinister confessional interrupted by a monster. Dani’s voiceover explains this isn’t therapy, not even a type of conversion therapy. The end result is death.

8.) The New Mutants Level Up

Dani’s rallying cry works because all of the New Mutants totally level up in the next scene. Sunspot goes fully solar form (awesome!). We see Cannonball’s hands flare up with energy. Magik summons her famous Soulsword and wicked cool armor. The kids are going to fight for their lives.

9.) The Red Eyes of the Demon Bear 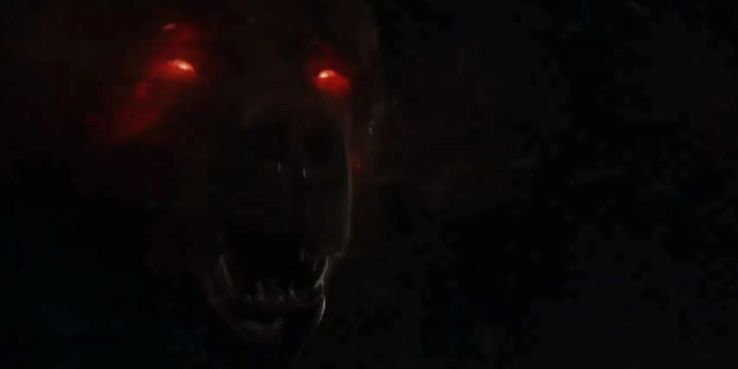 So, just who is the real bad guy in the film? Surely, Doctor Reyes—or is she? Fans of Dani’s storyline know her number one antagonist is Demon Bear.

As scary as that sounds, the entity is so much worse than a natural predator. It is a living nightmare with lethal claws, terrifying strength, and the ability to teleport and debauch people into terrible versions of themselves.

It’s haunted Dani since the death of her family and those glowing red eyes in the trailer say the nightmare is just getting started.

What did you think about the latest trailer for The New Mutants? Do you think it will be worth the wait? Let us know in the comments!