Susan and Kitty are going higher, further, faster than ever before to bring you the newest episode of Then & Now. Although the mantle of Captain Marvel has passed to seven different heroes over the ages, one Hala star is shining brightest as she prepares to make her exciting Marvel Cinematic Universe debut- This is Captain Marvel: Carol Danvers Then & Now! 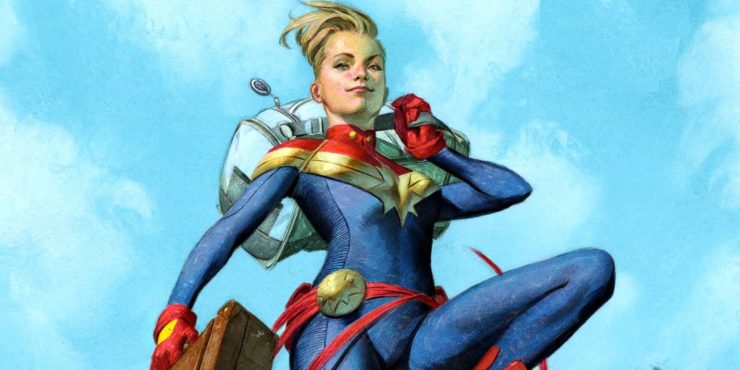 Have you ever taken off running so fast that it felt like you were flying? Have you ever looked at the stars and knew you belonged among them? If you answered “yes”, you and Carol Danvers might be BFFs. From a small girl with big dreams to being a leader of the Avengers, Captain Marvel has solidified her place in Marvel comics and is now soaring into the MCU.

Over the years she’s gone by a number of codenames- Ms. Marvel, Warbird, Binary, and now, Captain Marvel.  The seventh character to take on the mantle, Carol brings a new life to the name with her relentless bravery, wicked sense of humor, and good heart.  She’s a natural born leader whose strength and stubbornness make her a formidable foe.

From a fearless reinvention by Kelly Sue DeConnick, to an epic costume upgrade from Jamie McKelvie, to an empowering update to her backstory by Margaret Stohl, many incredible comics creators have had a hand in shaping Carol’s latest adventures both in space and planetside.  Captain Marvel’s been everywhere from the Avengers to Alpha Flight to her very own Carol Corps; in just seven short years since the debut of her newest codename, Carol Danvers has pushed the boundaries of Marvel comics at every turn.

As fans can see in her comic stories and in her upcoming movie, the strength of Captain Marvel, both in her power and her character, are undeniably the heart of the modern Marvel Universe. We can’t wait to see where the stars take her.

If you are interested in learning all about Carol Danvers taking up the mantle of Captain Marvel and becoming one of Marvel’s most prominent superheroes, check out these sources:

If you’re looking for Marvel collectibles or Avengers figures, look no further- Be sure to browse Sideshow’s full offering of Marvel superhero figure, prop replicas, statues, and more!

We are proud to bring you pop culture content completely AD FREE, but that doesn’t mean we don’t need your support to help keep us going. If you enjoy Then & Now, please take a moment to leave us a 5-star review on iTunes, Spotify, or your favorite podcasting platform and help spread the word about our podcast.

Be sure tune in for our other pop culture podcasts: Take a peek into geek culture and check out our Top 10 fandom favorites in the Geek Culture Countdown. Hear exclusive interviews with celebrities and pop culture industry leaders as they let their geek side show in Look Who Showed Up. Then, get all the latest pop culture news with our Daily Briefing, a two-minute breakdown of the biggest geek headlines perfect for your Alexa or Google news briefings.