The very first Star Wars™ movie showed us a plethora of droids and their functions. They could be astromechs, servants, repair machines, you name it they can do it. Some looked like trash cans, others like clowns. It was implied that they were commonplace in the galaxy, and if a few robots in the Jawa™ Sandcrawler were any indication, some were intimidating.

But in the days of the Old Republic, droids were used for mass destruction by the Confederacy of Independent Systems (also known as the Separatists). Though most were deactivated at the rise of the Empire, some lingered on to be used by Darth Vader and other nefarious criminals.

Let’s take a look at some of the deadliest droids we’ve seen in the Star Wars saga. 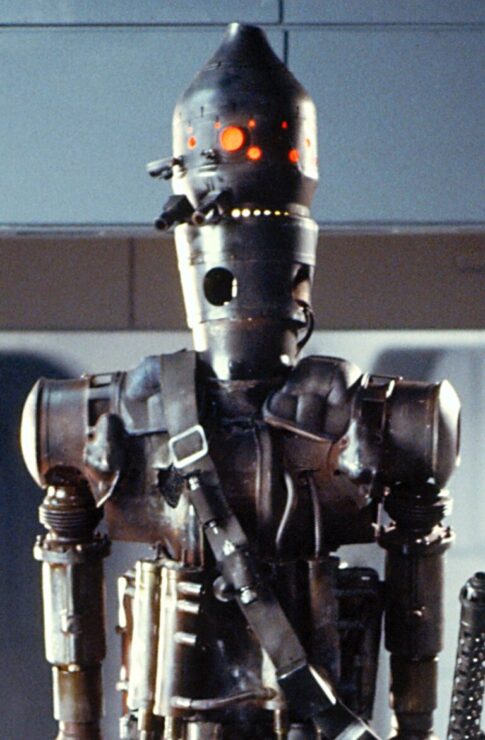 It was The Empire Strikes Back™ that gave us our first taste of a truly deadly droid. Lord Vader had assembled a group of the galaxy’s most feared bounty hunters. Most either didn’t look human or didn’t show their faces at all.

One, however, was clearly not even a life form. IG-88B™, a sleek, lethal-looking droid, was the second most dangerous bounty hunter after Boba Fett™. If you look at him long enough, he’s pure nightmare fuel — imagine that coming at you in the dark.

An IG unit designed for assassination, this droid was equipped with guns, advanced sensors, and a built-in flamethrower. His programming was a bit off, which led to an uncontrollable urge to kill. Upon activation, he actually killed his creators. He then spent his career tracking down the galaxy’s most wanted, even going after Vader on one occasion. He almost defeated him, too. 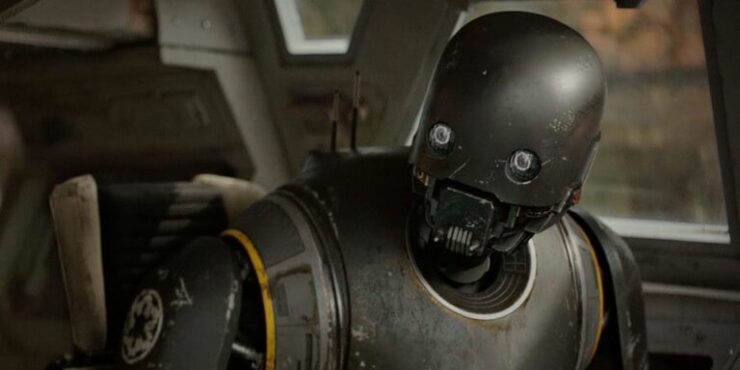 When the Republic fell, the Empire decommissioned all the battle droids used by the Separatists. Some types of droids were still allowed for security and manual labor. One was K-2S0™, a seven-foot KX-series Imperial security droid featured in Rogue One: A Star Wars Story™.

Stolen by the Rebels and reprogrammed to fight the Empire, he’s certainly an imposing character with his height and blaster skills. His deadly aim is particularly noteworthy. However, his most impressive attributes are his intelligence and quick wit. He bonds with his team of Rebels using sarcastic banter and matter-of-fact statements.

K-2SO is perfect for infiltrating Imperial strongholds, as there are many other Imperial droids that look just like him. Unfortunately, this could lead to mistaken identity, even among his own team. 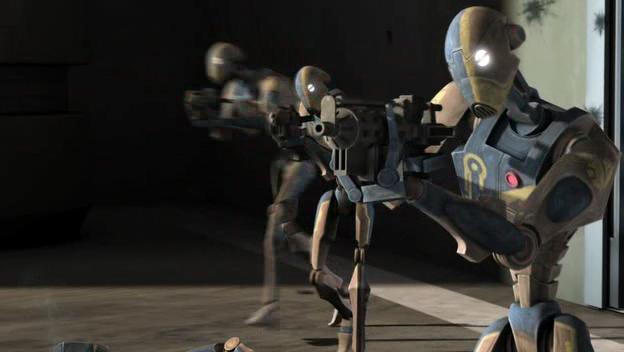 Many types of droids were used effectively by the Separatists in the Clone Wars™. One was particularly dangerous, but also somewhat rare due to its high price.

The BX-series commando droids were basically ninjas. Athletic and fast, they were regarded by many as some of the most dangerous machines in the Separatists’ arsenal. They were skilled with not only blasters, but melee combat as well, using vibroswords and stun weapons to overwhelm their foes. A creepy characteristic is their tendency to mimic voices, which can make battles go south for the Republic quite fast.

Vader used an army of these droids for some major missions after the loss of the original Death Star™, along with a couple of familiar-looking assassin droids. 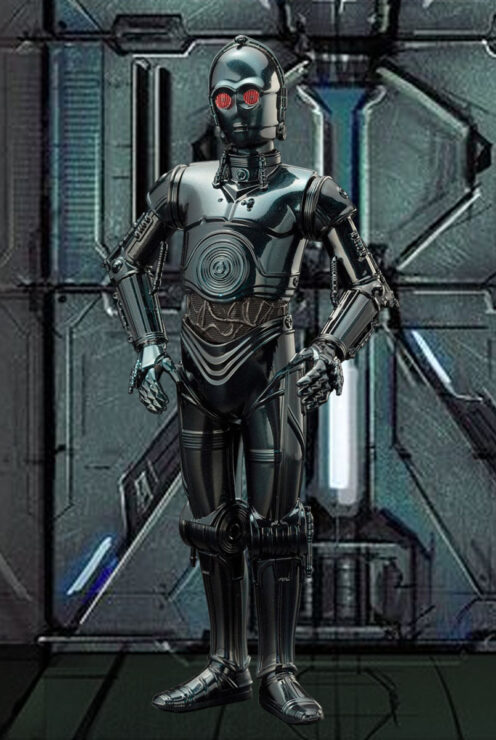 0-0-0, a droid featured in comics and games, is a protocol droid. However, unlike Threepio, he’s been programmed to be cold, calculating, and lethal. While he still translates and cares about etiquette, he can also cause severe suffering.

Triple Zero started out as a program that could be used for any protocol droid. It was hidden away for years until Doctor Aphra, working with Darth Vader, paired it with a body. Along with BT-1, an astromech droid like R2-D2, Triple Zero worked for Vader and Aphra as an interrogator and an assassin. 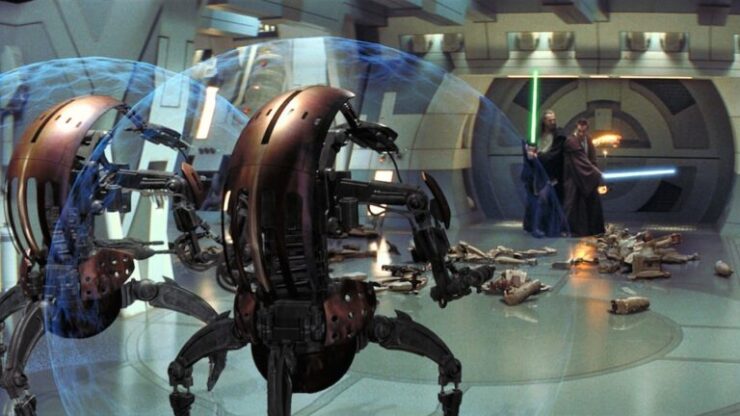 Also called destroyer droids, droideka were a feared force during the Clone Wars. Even the Jedi generals had to be careful, giving them a wide berth and using strategy to bring them down.

Equipped with a 360-degree shield, the droidekas were notoriously difficult to kill, as shown by their battle with Qui-Gon Jinn™ and Obi-Wan Kenobi™ in The Phantom Menace™. They would fold down into spheres and roll up to the frontlines, standing their ground and firing with the built in blasters on each of their “hands.” Enemy fire merely bounced off their shielding.

The most effective way to destroy them, short of cannon blasts, was for a team of clones to distract them and then use an EMP grenade. Their shields weren’t designed to stop slow-moving objects, so when thrown just right, a grenade would get the job done quickly. They were also blind from behind. If not for these weakness, droidekas would have been basically unbeatable. 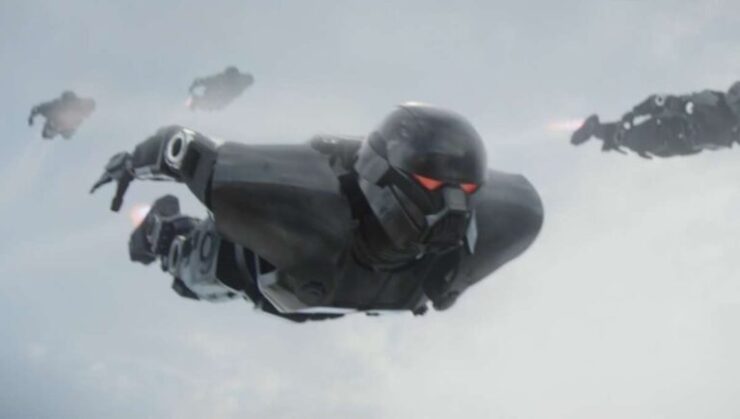 Featured in many non-canon properties like comics and video games, Dark Troopers were intimidating and destructive machines built by the Empire. The canon was finally established last year with their appearance in season 2 of The Mandalorian™.

Imperial Dark Troopers went through several phases. Originally, they were simply advanced killer droids. Later, they were piloted by Imperial soldiers. After the Empire lost the Galactic Civil War, Moff Gideon™ resurrected the project and went back to basics, taking the organics out of the equation and making them machines alone. They were crucial to the survival of the last vestiges of the Empire.

Against traditional blasters, projectile weapons and blades, the Dark Troopers are unstoppable. They are equipped with highly advanced sensors, jet booster propulsion, and nearly impenetrable armor. Their weakness? A powerful Jedi with a lightsaber.

Also featured in The Mandalorian, IG-11 was a blast from the past for fans of the original trilogy. He was the same type of droid as IG-88B and, sure enough, was a bounty hunter as well. However, unlike 88, 11 eventually became one of the good guys.

IG-11 was sent to collect Grogu™ on Arvala-7™. The droid decided to kill him, but Din Djarin™ felt compassion for the young Force wielder and took out 11 with a blaster.

The droid was later reprogrammed by Kuiil™, an Ugnaught™ who needed someone to work for his vapor farm. He was also eventually programmed with an antithetical function — to “nurse and protect.” From then on, he was Djarin’s ally, and soon became Grogu’s fierce protector.

Featuring the same capabilities as IG-88 (and a few upgrades, like a bacta spray™ and a plasma cutter), 11 was deadly to anyone who might try to harm Grogu or his friends. He was especially dangerous on a speeder bike, as shown when he obliterated a platoon of Stormtroopers™ after rescuing Grogu.

When he reached Djarin and his friends at a cantina, the team engaged in a valiant last stand. While the rest of heroes escaped, 11 stayed behind with Djarin to treat his injuries. Because of this, 11 became the only being to see Djarin’s true face for years. Technically speaking, he wasn’t alive, so Djarin didn’t break his code.

Although he wasn’t flesh and blood, IG-11 certainly seemed to have heart. After being trapped in a tunnel by enemy forces, 11 walked to the other side and engaged his self-destruct function, killing the troopers and giving the heroes a way out. Not only was he a droid that fought for an honorable (though reprogrammed) reason, he also sacrificed his own “life” for his comrades. 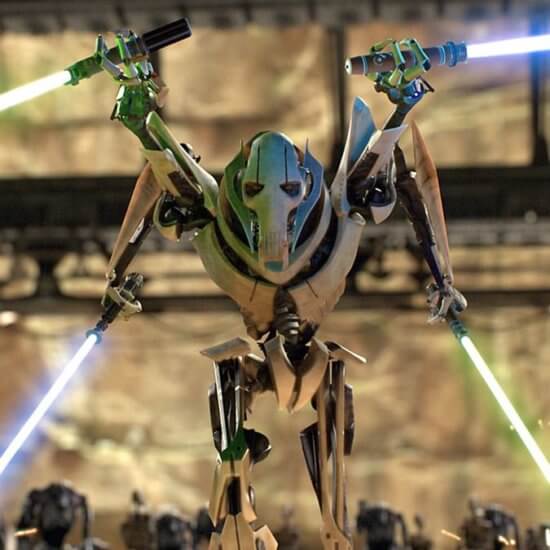 Some would say that, technically, General Grievous™ shouldn’t be included on a list of deadliest droids. He is, after all, a cyborg, not fully mechanical like the other entries. But he comes closer to a droid than any other organic character in Star Wars, including Darth Vader.

Not only that, he also led the entire battle droid army of the Separatists. Darth Sidious™ and Count Dooku™ pulled the strings, but Grievous was often out on the field with the robots fighting against the Jedi. Of course, he became quite cowardly towards the end, running and hiding while the droids carried out his orders. But when he did fight, he was a formidable foe.

Hailing from the planet Kalee™, Grievous was a being whose existence was shaped by war and strife. He gladly submitted to surgical procedures that would frighten any sane person. Eventually, his whole body was mechanical, aside from his brain and a couple of organs.

The former Kaleesh warlord was recruited by Dooku and trained in the art of lightsaber combat. Though not Force-sensitive, he became quite skilled, and would often take swords as trophies from the Jedi he killed.

Grievous seemed to think that his cybernetic implants were improvements. In his view, he was evolved. Despite being proud of his cybernetic elements, he sometimes appeared to loathe the droids under his command. They worked well together for the most part, and he likely understood droid maintenance issues more than other characters. But to him, they were lifeless automatons — not an evolved, intelligent warrior of flesh and metal like himself.

Organic life and automated intelligence often have a tricky relationship in sci-fi, and the droids of Star Wars are perfect examples. They nurture, protect, and serve, but sometimes they also kill.

Who is your favorite dangerous droid? Let us know in the comments and don’t forget to Let Your Geek Sideshow!