Susan and Kitty are trying their luck discussing Marvel’s most masterful manipulator of probability.  From a checkered past to her career as a mercenary and member of X-Force, she beats the odds in every fight- It’s Domino Then & Now! 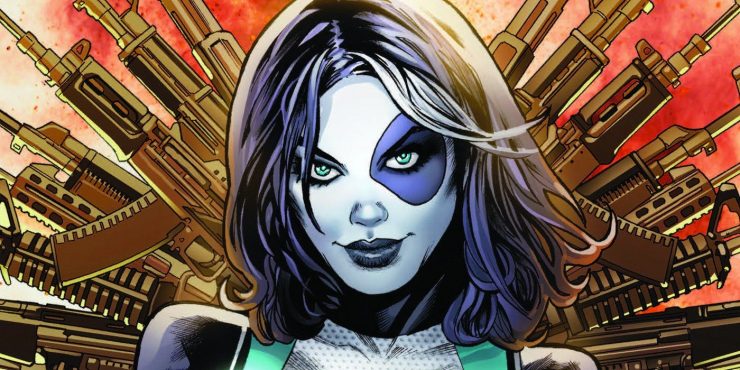 Today, we’re trying our luck and talking about a mutant master of probability manipulation- Domino! Born to be a weapon, she beat the odds and honed her strange powers to become one of the deadliest mercenaries in the Marvel universe. Whether she’s striking out on her own or working as part of a team, you want her luck on your side.

Whether she’s down on her luck or beating the odds, Domino never gives up the fight. While her relationship with her powers isn’t always black and white, she always tips the scales in her favor, making her an invaluable asset on any team of heroes, mercenaries, or mutants in general. In spite of a checkered past, Domino is a badass fighter with the luck and skill to stand out against anything you can throw her way.

Want to learn more about Domino’s past in Project Armageddon and X-Force?  Check out her profile in our Unsung Heroes Spotlight: Domino or our X-Force Roster Roll Call.

If you are interested in following Domino’s time in the Marvel Universe, check out the following sources: