Most of us celebrate Halloween by carving Jack-o’-lanterns, exploring a corn maze or two, or curling up to watch a late-night horror movie. The latter is an especially popular way to celebrate the spooky season but scary movies aren’t the only ones that scream Halloween. Just as we celebrate the ghoulish festivities in our own ways, so do films.

Many great films take place on or around the bewitching festival. Protagonists blow off steam at high school Halloween parties or eat candy-filled feasts for All Hallows Eve. And sometimes the best Halloween scenes are simply ones with gorgeous sets brimming with pumpkins and trick or treaters. That’s why we have compiled this list of movies of a variety of genres that each celebrate October 31st in their own way.

However, despite the serious awesomeness of Michael Myers, we’re not referring to any of the Halloween movies themselves. Myers is as classic as you can get when it comes to Halloween films so this list will assume you have or already plan to watch his movies.

Ready to see which films have the best Halloween seasonal scenes?

If that hasn’t sold you yet just, look at Sam (pictured above), who now joins the ranks alongside Freddy Krueger and Michael Myers for iconic Halloween figures. Although, we do think he is much cuter.

Scary Stories To Tell in the Dark 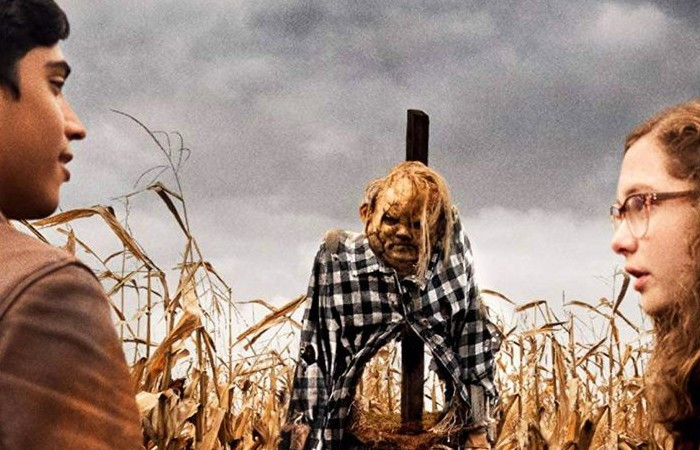 There isn’t a wasted second in this horror film, as it opens in the ’80s on Halloween night itself. You’ll instantly get sucked into the spooky ambiance that includes a haunted house, terrifying tales, and monsters brought to life.

Based on the viciously popular novel series, the film goes on to bring several haunting stories off the page and onto the screen, guaranteed scare both adults and children alike. 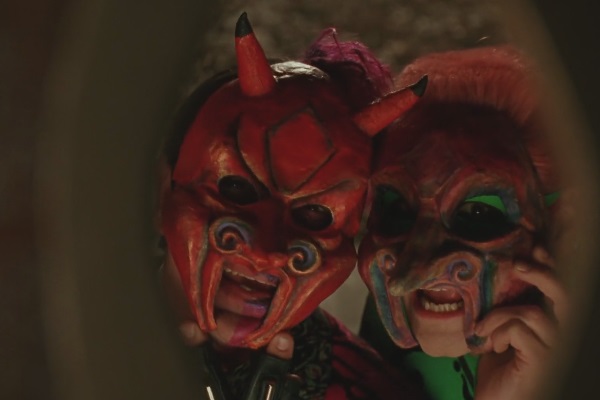 Not many realize this, but the third installment of Warner Bros’ Batman series is an exceptional addition to any Halloween watch-list.

Yes, the film has all the elements that DC fans can expect: a dark and shady Gotham, classic foes, and sidekicks like Harvey Dent and Robin, but it also has a genius trick or treating scene with the Riddler (Jim Carrey) and Two-Face (Tommy Lee Jones). The kooky scene is worth it alone. 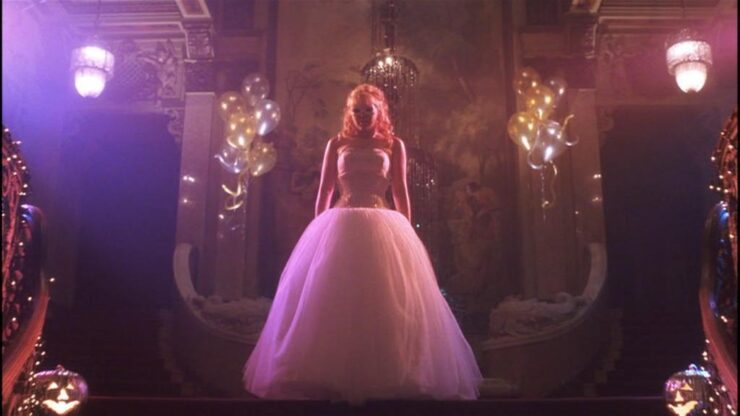 Again, the teen rom-com doesn’t get enough Halloween acknowledgment, which really doesn’t make sense as its climax happens at a high school Halloween dance. More beautiful than it is scary, this scene still embodies the elegant masquerade aspect of this seasonal celebration.

Put on this feel-good retelling of Cinderella if you are in the mood for extravagant costumes and guises.

Harry Potter and the Sorcerer’s Stone 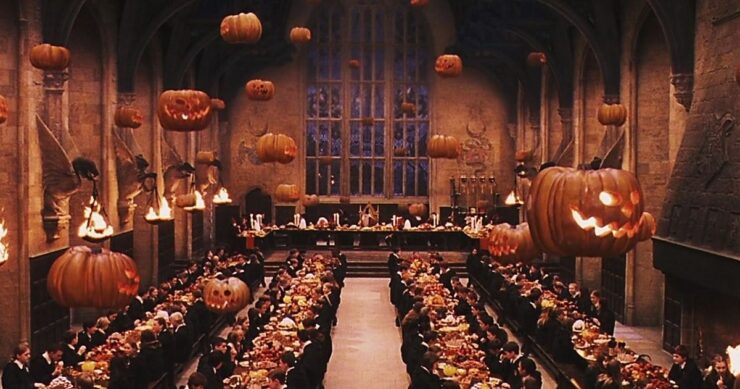 Witches and wizards. Pet toads and spells. Hogwarts, the magical boarding school. Believe it or not, this is not why the first Harry Potter film made our list!

Sure, any of the eight films would be perfect for an autumn day, but the first directly celebrates Hallowe’en. In the Great Hall, Harry, Ron, and Hermione sit down to a spectacular feast that includes pumpkin pasties, lollipops, and floating pumpkins.

Also, true Potterheads will know things usually go haywire on Halloween in the wizarding world (e.g. the troll in the dungeon and the opening of the Chamber of Secrets).

This list wouldn’t be complete without one of the most famous Halloween parties in pop culture. Yes, we’re talking about the party where the Cobra Kai, dressed in too-cool skeleton costumes, chase and beat Daniel (Ralph Macchio).

It’s not until Mr. Miyagi shows up that Daniel is finally rescued, and the rest is history. 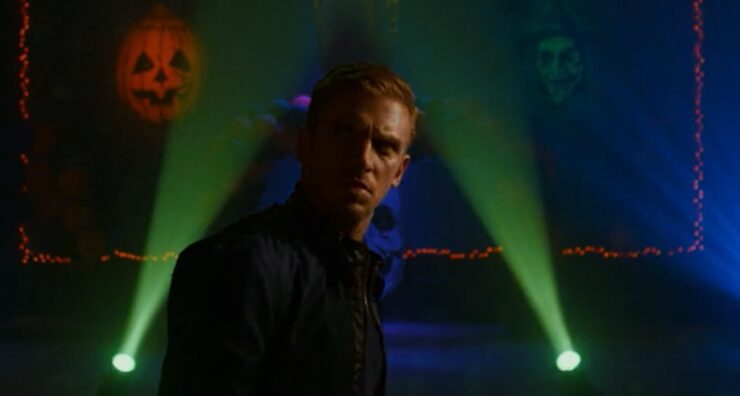 Not enough people are talking about this thriller. The film stars Legion’s Dan Stevens and the same man who brought us Blair Witch, VHS, and You’re Next (Adam Wingard) also directs this one.

Stevens plays a charming stranger who infiltrates the lives of one family, claiming to be a friend of their deceased son and brother. Of course, David (Stevens) is not what he seems to be and in regards to Halloween, The Guest just oozes with typical ominous spirit.

We can’t say much without giving away the ending but ’80s nostalgia and a Depeche Mode-esque soundtrack pair nicely with a Halloween fight scene. 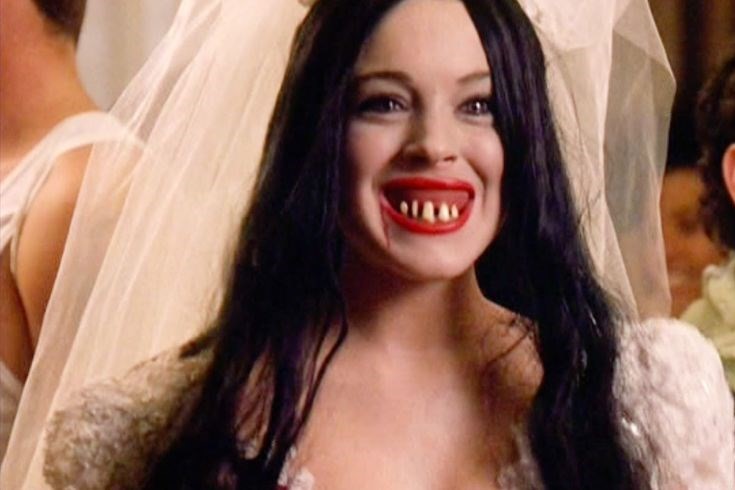 Many movies on our list celebrate All Hallows’ Eve with parties but, let’s be honest, nothing compares to Cady (Lindsay Lohan) showing up to a smutty costume party in an absolutely dorky costume. If you haven’t seen it, we’ll fill you in: Cady is from Africa, raised by very protective parents, and hasn’t yet learned that Halloween costumes should be sexy and not scary. Duh.

The movie stars A-listers Tina Fey, Rachel McAdams, and Amanda Seyfriend who really do give some of the best comedic performances of the last decade. Watch the teen drama unfold. You won’t regret it.

(The Halloween party was even turned into a big dance number in the Broadway hit reimagining of the film, so you know it’s important.) 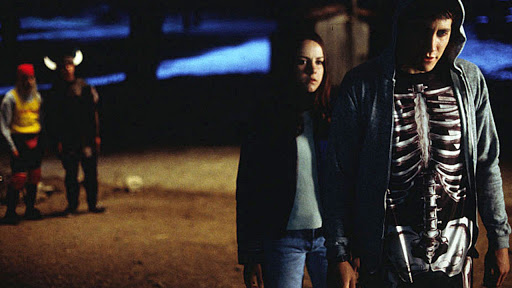 Ladies and gentlemen, we have reached the top of our list of best Halloween scenes in film and Donnie Darko is at number one. Firstly, if you haven’t seen this film, give it a watch regardless of the season. But it does make an exceptional watch for Spooktacular.

The sci-fi thriller, which is more or less about a boy and a possibly real or imagined rabbit who convinces him that the world will end in twenty-eight days, has several Halloween-“friendly” scenes. The first is Donnie (Jake Gyllenhaal) at a Halloween showing of The Evil Dead. The second, and lengthier, scene takes place at a Halloween/Harvard acceptance party…and let’s just say things get weird as all things should this time of year.

What are your go-to Halloween movies? Did any of your favorites make the list? Let us know in the comment below!