Five Fictional Families We Want to Spend the Holidays With

The holiday season is a time when friends and family gather to catch up, eat lots of food, commiserate, and just to spend time together. For some of us though, finding a place to feel at home isn’t quite as easy.

Family is what you make it, and that includes fictional families that make you feel safe and at ease. With that in mind, we took a look at five families from film, TV, and comics that we’d love to break bread with during the most wonderful time of the year.

This entry was almost too easy, simply for the fact that we’d want to be wherever Alfred Pennyworth was cooking dinner. Seriously, have you seen the spreads that man has crafted over the various Batman comics, shows, and movies? Beyond that, Bruce Wayne’s extended adopted family has always shared a strong bond, even if it has been a bit unhealthy, dangerous, and cataclysmic over the years. That kind of dynamic is rare, particularly given just how many different personalities are involved.

Capes and cowls aside, chilling out at Wayne Manor with Bruce, Dick, Tim, and Damian (and Barbara and Stephanie and Kate and Cassandra) with nothing on the agenda except eating and perhaps playing some games sounds great, provided there aren’t any emergencies in Gotham that night. Then it’d be a bit awkward when we’re left alone with Ace and all the desserts. 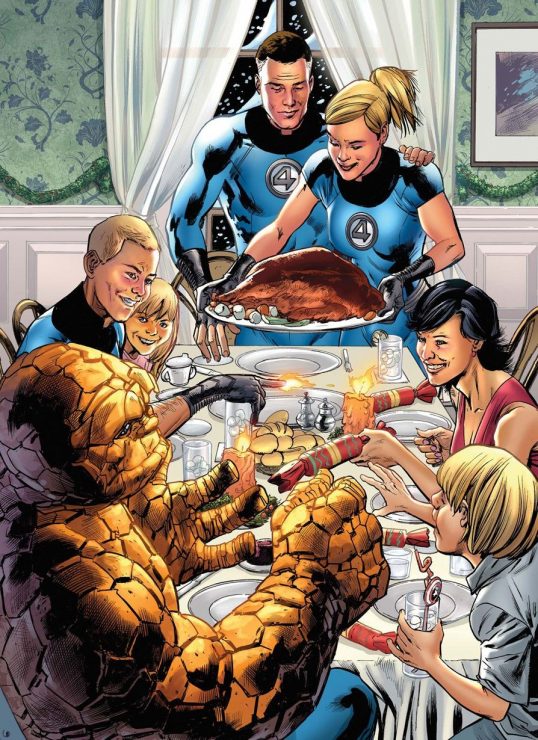 As the first family of comics, it’s hard to find a reason not to want to spend an evening with the Richards/Storms/Grimms. For decades we’ve seen just how wonderful and loving this family is, and independent of being universe-spanning explorers, the bonds these people share are immutable. But let’s look past that aspect here, and instead think of what a day or two with the Fantastic Four might be like.

You’ve got two of the most loving, intelligent people in the 616 at the head of the table in Sue and Reed, so you know the conversation will never hit a lull. Ben is a wild storyteller, and would certainly have some tales to share. That is, as long as Johnny can keep from pranking him too much during the festivities. The FF are just so accepting, you’d feel like part of the family the moment you walked in for dinner, and that’s a feeling you just can’t beat.

In the past decade or so, you’d be hard-pressed to find a television family more compelling and wonderful than the Taylors. Coach Eric Taylor and his wife Tami are the gold standard for married couples on a network drama, and that’s only partially due to the way they’re written. The rest of it comes from the unbelievable chemistry Kyle Chandler and Connie Britton have with one another. (But I digress.)

In the town of Dillon, Texas, football is family and family is everything. When spending time with the Taylors you not only get to enjoy a great meal, but you get to be surrounded by the culture Coach has cultivated in this blue-collar town. It’d be a humble experience to be sure, but there’d be plenty of laughs and stories to go around. And if you needed someone to talk to, Tami and Coach are both tremendous listeners, and full of sage advice that has transformed so many young lives over the years. We kinda wish we were headed there for dinner now. 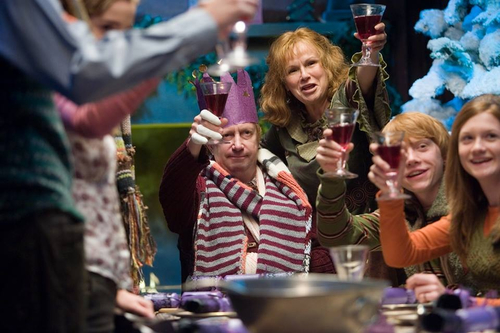 No matter which version of Harry Potter you’re familiar with, there’s no more stable a family in the Potterverse than the Weasleys. That family has been through a lot, but they keep kicking. The strange thing is, despite being a family full of wizards, they feel just like the family your real life best friend had when you were growing up.

There’s the over-caring mother who’d burn it down if anything threatened her kids; the dad who is “hip” to trends, but those trends have juuuust passed, so he’s a little cringe-worthy; there are the older brothers whose sole purpose is to antagonize your friend and you at all times; and there’s the sister that you maybe had a crush on, but she was way out of your league and you couldn’t believe she was related to your friend at all. Yeah, Mrs. Weasley can cook like nobody’s business, too, but honestly it’s the familiarity of the Weasleys that makes them such appealing hosts.

The Parrs (The Incredibles)

While the Parr family may be an homage to Marvel’s Fantastic Four, over the course of two films Mr. Incredible, Elastigirl, Violet, Dash, and Jack-Jack have shown they’re much more than that. The family has been through some tremendous adversity, and has always come out on the other side due largely to their ability to trust in one another. There’s a strong dynamic between the parents, who complement each other wonderfully.

We can already hear Bob regaling us with a tale of a previous adventure, and Helen interjecting with her wry wit about what really happened. The kids are entertaining in their own ways too, and their antics would certainly liven things up if there was any post-dinner exhaustion. Plus, there’s always a chance Frozone could show up for dessert. You wouldn’t want to miss that, would you?

So as we settle down for feasts with our loved ones this holiday season, which fictional family do you wish you could join at the table?  Let Your Geek Sideshow and tell us in the comments below.

Happy holidays, from our geek family to you!