What if death was no longer a wall, but simply a door? What if the perfect companion could be assembled from scraps and brought to life? Mary Shelley, the author of Frankenstein, or The Modern Prometheus, captured the world’s imagination with her horrific tale of a scientist and his creation. She answered these questions and, in doing so, gave the world a monster it would never forget.

Shelley took humanity’s collective obsession with death and its fear of loneliness to craft a story that would live on for over 200 years. The novel was first published in 1818 and since then, Frankenstein’s Monster has of course made the leap to page from screen thanks to Universal Studios and their immortal Universal Monsters.

But how much about Shelley and Frankenstein do you really know? First things first: Strictly speaking, Frankenstein only refers to the scientist. In the novel, his monstrous creation has no name. Instead, he is often referred to as the Monster, and in the novel Shelley calls him the fiend, the daemon, or the wretch. Unleash your inner monster with the following freakish facts about Frankenstein. 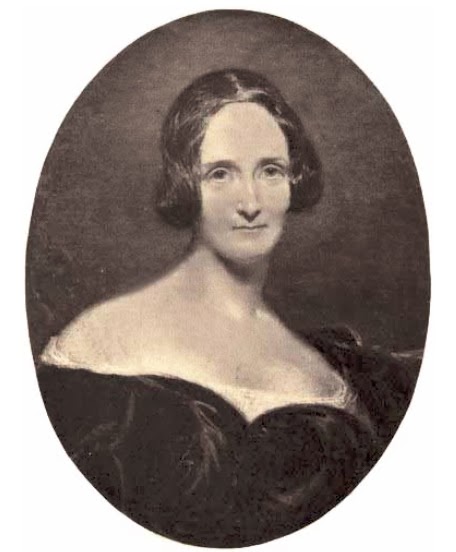 Aside from the macabre tragedies of her novel Frankenstein, Mary Shelley was no stranger to darkness. After her husband’s cremation, it’s said she even kept his calcified heart within her writing desk. As Olivia Rutigliano wrote in an article for LitHub, Shelley’s life was in many ways even more dramatic than her most famous literary work. She endured terrible loss, a convoluted marriage, and a daunting family legacy. Her mother was Mary Wollstonecraft, the proto-feminist author of A Vindication of the Rights of Women. Sadly, her mother died from childbirth complications, setting her daughter Mary down a peculiar path — straight to the graveyard.

Mary often visited the grave of her mother at St. Pancras Old Church. In fact, her mother’s grave become a central fixture in her life, a refuge from family turmoil and a meeting spot with her lover, Percy Bysshe Shelley. Literary scholar Sandra Gilbert suggested that the grave itself became a stand in for Mary’s mother. When she fell in love with Shelley, she took him to this sacred reading spot. Based on journal entries from Shelley, it would appear that this gravesite was also where the couple first ignited that age-old spark. 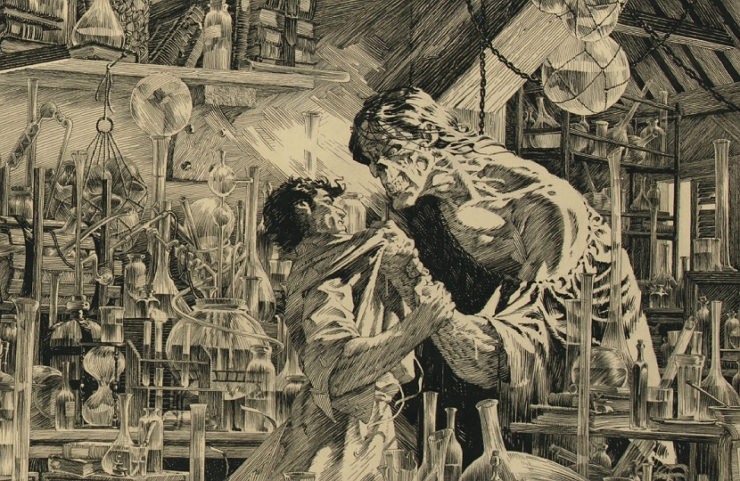 One of the biggest differences between Mary Shelley’s novel and the enduring pop culture version of the Monster is speech. In James Whale’s 1931 film Frankenstein, which has influenced the majority of the Monster’s modern appearances, the Monster cannot speak. He isn’t really the brightest bulb in the lab. However, back on the page, Frankenstein’s Monster was eloquent, philosophical, and endlessly intelligent. He argued with the doctor and advocated for his own stunted humanity.

Many have pointed out that the relationship between creator and creation is reflective of Shelley’s struggle with her mother’s legacy. Dr. Frankenstein and the Monster are constantly at each other’s throats. Their mutually assured destruction is the result of heartbreak and failed expectations. The beloved artist Bernie Wrightson captured the tumultuous nature of the pair in his cover art for the Marvel Comics adaptation of Frankenstein. It sold for a record-breaking $1.2 million at a private auction.

Get Off My Cloud

It was a dark and stormy night when the concept of Frankenstein and his monster were birthed from Shelley’s mind — at least, that’s how the story goes. She always maintained that her horrific vision came to her in a dream, but it’s definitely true that she first shared the tale of Frankenstein during a ghost-story contest among her friends. Those friends included Percy Bysshe Shelley, Lord Byron, and John William Polidori (whose story “The Vampyre” partially inspired Bram Stoker’s Dracula).

As far as the storm, the year 1816, which was when this spooky contest occurred, is known as the “year without a summer.” Imagine extreme weather disruption, enough to cause widespread agricultural failure, along with billowing clouds of ash blocking out the sun (talk about a horror story). The devastating eruption of the Indonesian volcano Mount Tambora might not have directly influenced Mary Shelley as much as the Napoleonic Wars and the Scientific Revolution, but the popular myth sure does darken the mood. 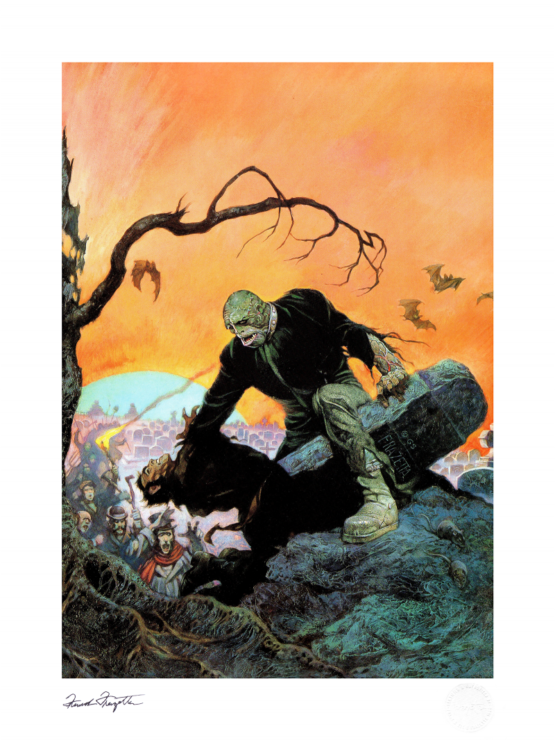 With a story as eternal as Frankenstein, there have been countless adaptations, retellings, and reimaginings. The Monster has been an accomplice of comedians like Abbott & Costello and a star in parodies like Young Frankenstein. Animated versions of the monster have popped up in various cartoons and video games, and Marvel and DC Comics have both utilized the Creature. In other iterations, the wretched horror is kept alive through frightening shows like Penny Dreadful and even a 1965 kaiju film, Frankenstein Conquers the World.

While Shelley describes her Monster as having a yellowish tint to his skin, and there is no mention of scars, the most well-known (and feared) appearance of the Monster is green and grotesque. Jack Pierce, who designed the looks for nearly every Universal Monster, decided to emphasize the sinister aspects of reanimating dead flesh.

He adorned Boris Karloff with a hacked off cranium and haphazard stitching, along with ill-fitted clothing to accentuate the Creature’s mismatched assembly. The whole makeup application process took hours each day to complete. And that sickly green, which is so closely associated with Frankenstein’s Monster, was actually used because it showed up best against the black-and-white film available in 1931!

Mary Shelley introduced the world to a nightmare that readers, moviegoers, and pop culture enthusiasts would come to cherish in fear. Her Monster, and the despicable doctor who rejected him, will forever be a cautionary tale of excessive pride.

Which part of Frankenstein lore captures your attention? Do you dare add Universal Monsters art prints to your home laboratory? Let us know in the comments and don’t forget to Let Your Geek Sideshow!