Black Panther has officially surpassed $700 million at the global box office after a record-breaking second weekend in theaters. On its second Friday-Sunday frame, Black Panther earned $108 million domestically, and the film now ranks as the third-fastest grosser of all time. 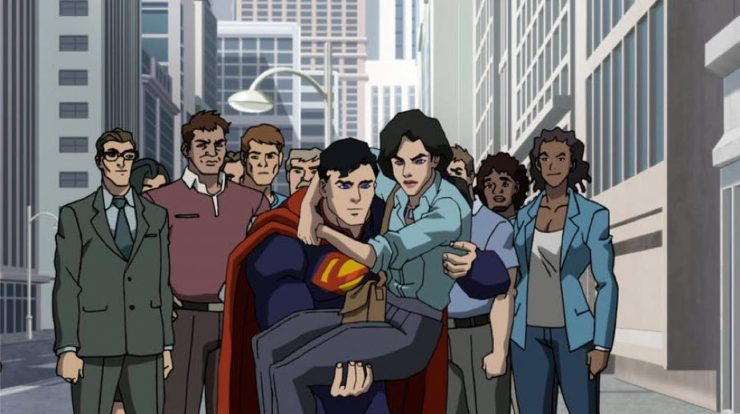 Fans now have their first look at Death of Superman, the latest animated film from DC and Warner Bros. Animation. The image shows Superman rescuing Lois Lane in Metropolis. Death of Superman has no release date yet, but it is the first of a two-part storyline, which concludes, with Reign of the Supermen.

Following an exchange on Twitter with director James Gunn, Mark Hamill may have just landed himself a role in Guardians of the Galaxy vol. 3. There is no guarantee it will happen, but Gunn and Hamill have agreed to meet and discuss the possibility of a cameo over some coffee.

Writer and showrunner Lauren Hissrich revealed on Twitter that the script for the pilot of The Witcher is now complete. The Netflix adaptation of this fantasy action franchise will be based on the novels rather than the plots of the video games. No casting or release date information is available for The Witcher at this time.

On Sunday, Febrauary 25th, director Kevin Smith tweeted a selfie in a hospital gown, announcing that he had suffered a massive heart attack. The crisis happened during one of his shows, but he was able to make it to the hospital in time to receive treatment. Smith ended his tweet with, “for now, I’m still above ground.” We wish him a speedy recovery!

Let Your Geek SideShow would like to acknowledge the life of animator Bud Luckey. Luckey was known for designing Woody in Toy Story, as well as animating many cartoons for Sesame Street. He passed away on Saturday, February 24th at the age of 83.