In one year, return to the Wizarding World with Fantastic Beasts: The Crimes of Grindelwald. #MagicInProgress #FantasticBeasts pic.twitter.com/8aWj8xhGj5

The movie is set to open on November 16th, 2018, and will return audiences to J.K. Rowling’s wizarding world. A full cast photo reveals familiar faces returning from the first film, as well as newcomers like Jude Law, playing a young Albus Dumbledore. 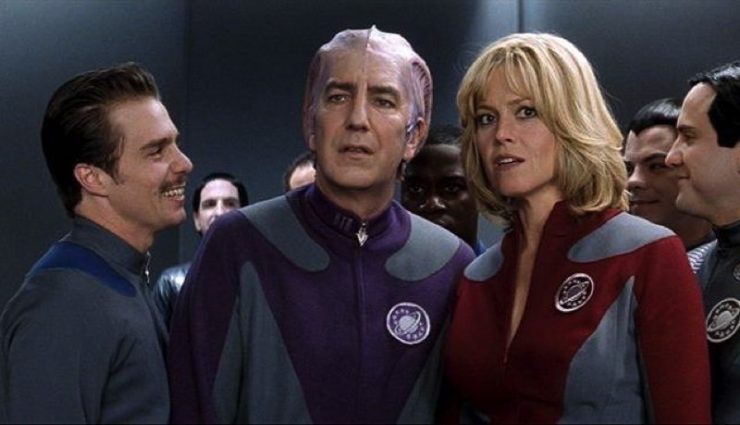 Never give up, never surrender! Paul Scheer, writer of the upcoming Galaxy Quest TV adaptation for Amazon Prime, has given some details about the spacefaring quest crew.

The series will pick up from where the film left off, with consequences from the original team’s adventures. He said the project will be “mixing two casts,” but Scheer couldn’t elaborate on further details.

Never let go. For a limited time only relive the magic of #Titanic in stunning @Dolby Vison HDR exclusively at @AMCTheatres starting 12/1.

Two decades later and we’re still not letting go! Titanic will be celebrating its 20th anniversary in December by returning exclusively to AMC theaters for one week.

The film will be remastered in Dolby Vision HDR, and you can see a trailer on the film’s official Twitter account, @TitanicMovie.

Sony Pictures Animation has released the first trailer for Hotel Transylvania 3: Summer Vacation, which sees Drac and his monster pack board a luxury cruise ship for some much-needed time away from the Hotel.

The film is scheduled to release July 13th, 2018, and is directed by acclaimed animator Genndy Tartakovsky.

Quiz: Which Member of the Justice League are You?