Get to Know Comedian Jeff May- Host of Sideshow’s Side Show Podcast!

Have you had a chance to check out Let Your Geek Sideshow’s podcast network? If so, you may have seen the most recent addition to the lineup, Sideshow’s Side Show, hosted by comedian Jeff May. 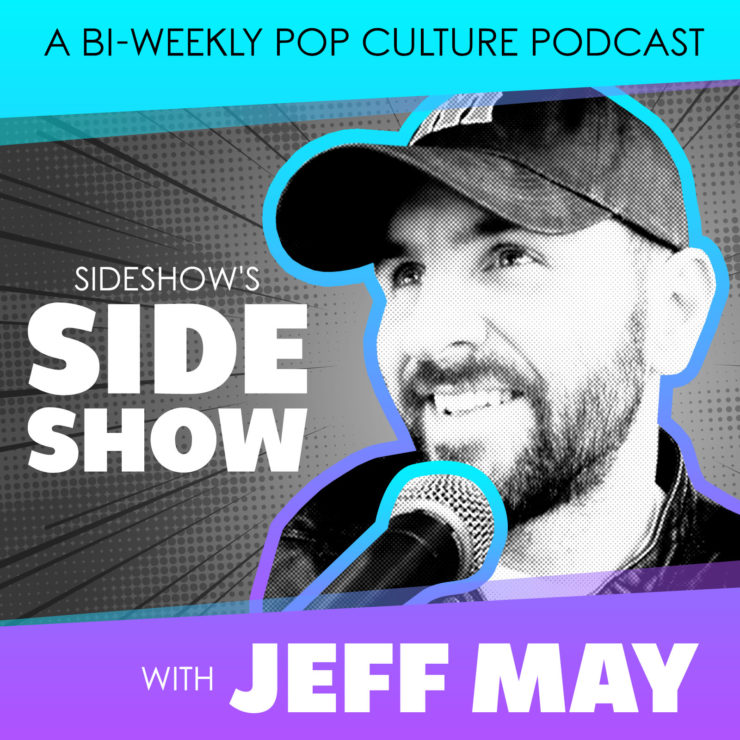 Sideshow’s Side Show is is a bi-weekly pop culture podcast where Jeff and his nerdy guests talk geek news, nerd history, collecting, and whatever else comes up. The show currently has over a dozen episodes of geeky goodness, with guests ranging from comic writers and artists to actors, musicians, and other comedians!

We had a chance to chat with Jeff and get to know a bit more about his background in comedy, his experience with podcasting, why he loves nostalgic toy packaging, and more.

Hi! My name is Jeff May and I’m a comedian, host, and podcaster in Los Angeles. I’m originally from the Boston area, where, before moving out west, I was a teacher and amateur boxer.

How did you first get into comedy?

While I’ve been obsessed with comedy my whole life, I didn’t start performing until the day my retirement was approved, which was during the late spring of 2012. I was inspired to leave teaching for comedy after seeing a few not-so-great comedians and realizing, “Oh, I could totally be doing this better.”

Not the best financial decision, to be honest, but it’s something that I had to do.

What is your prior experience in podcasting?

Podcasting was actually not on my radar when I got into comedy. It wasn’t until my friend Adam Tod Brown launched his Unpopular Opinion podcast in late 2013 that I first recorded one.

I soon became a regular guest, and eventually a co-host. Since then I’ve appeared on hundreds of episodes for dozens of shows.

Sideshow’s Side Show is my opportunity to bring the most interesting people I know in to talk about whatever their nerdy hearts desire. We always start with a plan, but no episode follows the same path. We’ve been lucky enough to have brilliant comic writers and artists, Grammy-winning musicians, Sith lords, hilarious comedians, and so many more.

I’m so excited to share the amazing guests I have on the docket in the future. I legitimately get surprised when so many talented people want to come on my show to talk nerdy to me.

What are your personal geek passions?

Personally, I’m pretty passionate about comic books as a whole medium. I’m a huge comic/pop art guy, much to my wallet’s chagrin. Star Wars will be my forever love.

I really love vintage toys and the nostalgic feelings they bring with them (I run a comedy show called “Mint on Card” in a toy store for a reason). Looking at old Masters of the Universe packaging really hits me in the feels, you know?

I love the whole of pop culture for what it says about us as a society. I used to teach a Social Studies class on how to interpret Pop Culture through an academic lens and it was always the highlight of my year.

Anything else you’d like to let the audience know?

It sounds cliche, but I’m honestly so grateful that the Sideshow community has embraced me so openly. It’s honestly scary to offer a show like this, which has little to do with statues and 1/6 scale figures, and wait to see how it’s received. I’m genuinely blown away by how receptive the fans have been towards me.

I’ve had one hell of a road, from teaching and boxing to stand-up, podcasting, and video hosting. I’m having a blast doing this, and I’m excited to see where it goes from here.

You can listen along to Sideshow’s Side Show with Jeff May on all your favorite podcasting platforms, including Pippa, iTunes, YouTube, and more.  Be sure to check out all the latest episodes featuring television writer Jennifer Muro, comics superstar Phil Jimenez, actor Sam Witwer, and more!

If you like the show, be sure to subscribe and leave a 5-star review so that other fans can find the podcast. Thank you for listening, and don’t forget to Let Your Geek Sideshow!