When Ghostbusters first hit the big screen in 1984, cinemagoers were jump-scared by a ghostly librarian roaming the quiet aisles of a public library, a multi-story marshmallow man trudging through the streets of New York, and slime — lots and lots of slime.

Fortunately, four wisecracking misfit scientists were just a phone call away, ready to take down these paranormal pests with their proton packs, ghost traps, and plenty of other paranormal paraphernalia. Bill Murray, Dan Aykroyd, Harold Ramis, and Ernie Hudson captured ghosts as well as audience’s hearts. But behind the scenes, it took much more than a simple phone call to bring the poltergeist-ridden picture to life.

In this article, we’re going to bust out the supernatural secrets from the now-classic comedy (because bustin’ makes us feel good), so grab your flight suit, strap on a utility belt, and gas up the Ecto-1. We’re takin’ a ride backstage to uncover the most interesting facts about Ghostbusters.

7. The Original Title of the Film Was Ghostsmashers

If there was something strange in your neighborhood, then you might feel inclined to pick up the phone book and navigate to the “G” listings. At one point, however, “Ghostbusters” would not have been the name to look for on this page.

In actuality, the group of spirit-seizing scientists were originally known as the “Ghostsmashers,” as Columbia struggled to secure the name “Ghostbusters” since that title already belonged to a Filmation kids TV series in the 1970s.

“Ghoststoppers” and “Ghostbreakers” were among the other names in the mix before the studio finally managed to strike a deal with the production company to use the title Ghostbusters for their film. 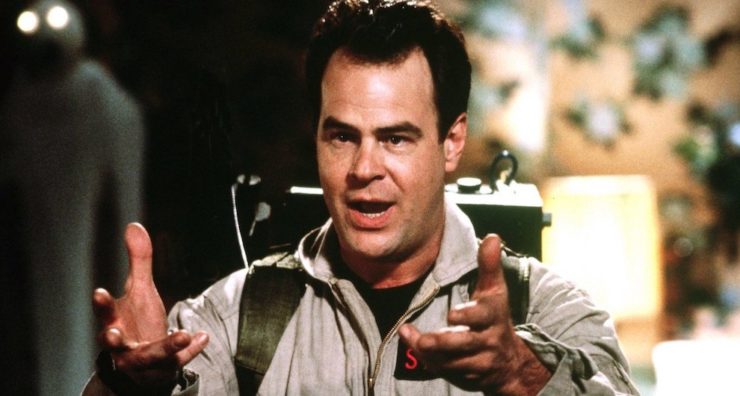 Dan Aykroyd had a fascination with ghosts both on and off-screen. He is known for spending a lot of his spare time investigating the paranormal and other unexplained phenomena that typically go bump in the night.

Ultimately, it was his interest in the supernatural that spawned the concept of the Ghostbusters. He conceived the ghost-hunting comedy while reading a parapsychology journal at his family’s farmhouse.

“I thought, I’ll devise a system to trap ghosts,” he explained to Vanity Fair. “And marry it to the old ghost [films] of the 1930s. Virtually every comedy team did a ghost movie — Abbott and Costello, Bob Hope. I was a big fan.” 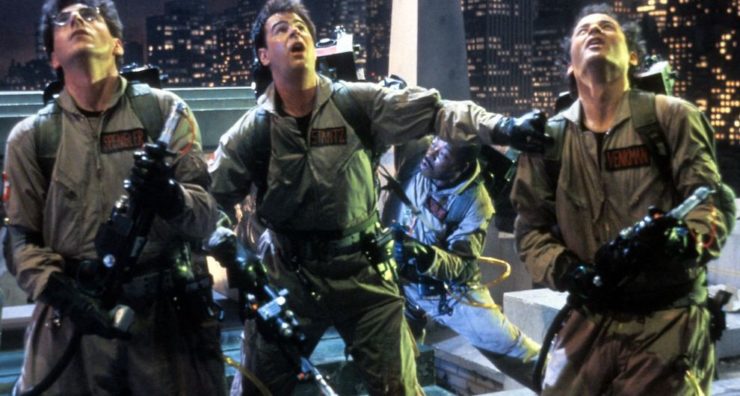 Dan Aykroyd penned an early script that set the protagonists on a trip through time and space to “bust” a whole host of mysterious haunts hanging out in other dimensions, proving once and for all that they ain’t afraid of no ghosts.

The original script reportedly focused on a three-man team comprising of Aykroyd as Raymond Stantz, Eddie Murphy as Winston Zeddemore, and John Belushi as Peter Venkman.

However, after Belushi’s tragic death, Aykroyd teamed up with Harold Ramis and Ivan Reitman to rework the first draft. The talented trio revised the screenplay during a three-week writing retreat at Martha’s Vineyard.

4. A Special Effects Company Was Founded for the Film 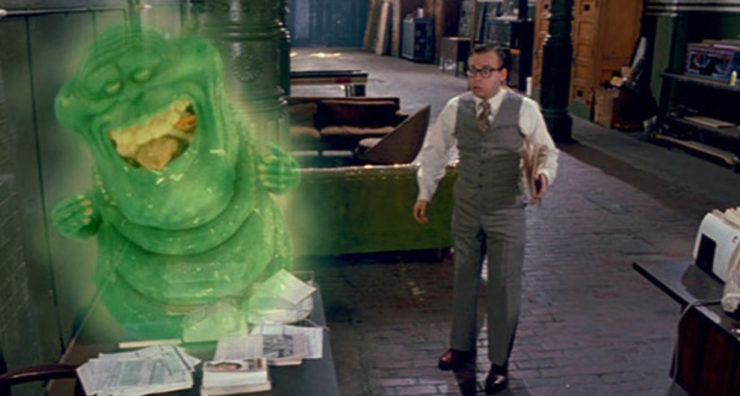 Ghostbusters’ green blob with a gluttonous appetite and the film’s free-roaming library lady are just two of the beings born out of the vortex of special effects that ooze onto the screen like ectoplasm.

The ’80s was a golden time for filmmaking. Many of the special effects companies were booked out with major projects, such as Indiana Jones and the Temple of Doom and Star Wars: Return of the Jedi™. Consequently, Ivan Reitman enlisted Industrial Light and Magic alum Richard Edlund to set up a special visual effects company of their own after convincing Columbia to team up with Metro-Goldwyn-Mayer to fund it.

3. An Alternate Plan for the Stay Puft Marshmallow Man 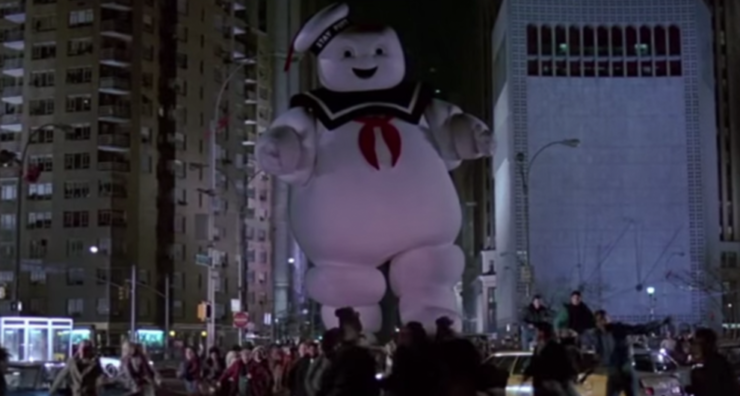 The Stay Puft Marshmallow Man was originally meant to emerge from the ocean, illustrating the size of the white mallow next to the Statue of Liberty. However, the scene presented difficulties, so the filmmakers devised an alternative entrance.

Even though the Puft didn’t end up following in the stomping footsteps of Godzilla, he did take a gigantic bite out of the budget. It is believed that three suits were used and destroyed in the production, each of which cost $20,000.

As for the massive explosion at the end of the film, the team raided their bathroom cabinets to gather gallons of shaving cream to simulate falling blobs of marshmallow in the sugary shower scene.

2. Ivan Reitman Provided the Voices for Zuul and Slimer 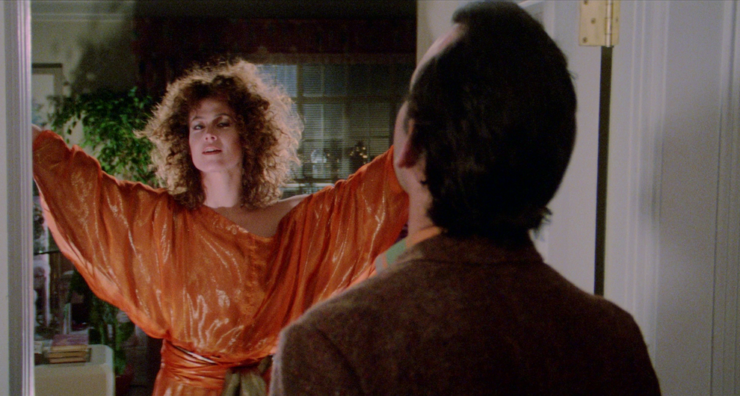 Zuul the Gatekeeper of Gozer assumed various forms throughout the film, possessing everything from an apartment refrigerator to Sigourney Weaver, yet his demonic voice always remained the same.

It has since been revealed that director Ivan Reitman provided the unearthly vocals for the creature. Interestingly, he was also responsible for Slimer’s dulcet tones in a secondary uncredited role.

1. The Ecto-1 Started Life as a Pink Cadillac Miller-Meteor 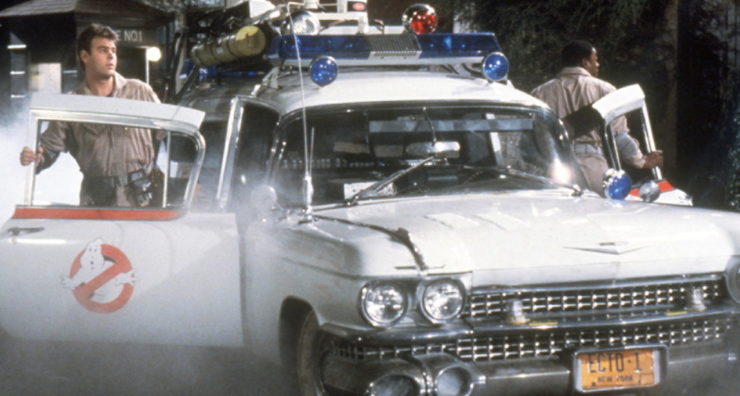 The vehicle that eventually became the Ectomobile started out as a pink Cadillac Miller-Meteor ambulance rescued from a salvage yard, which meant that it needed a slight makeover ahead of its starring role in the film.

Originally, the filmmakers planned to paint the automobile jet black, until it was pointed out that the car would appear almost invisible on the camera while it’s zooming around against an inky backdrop during the nighttime scenes. As it turns out, the color wasn’t the only spec up for discussion. At one point in the scripting process, the Ectomobile possessed its own supernatural powers, adding to the overall unpredictability of the picture.

Happy Ghostbusters Day! Which of these supernatural secrets surprised you the most? What is your favorite fact?

After you’ve picked up your Ghostbusters Employee Welcome Kit, keep the conversation going over at side.show/geekgroup — and don’t forget to Let Your Geek Sideshow!

Everything to Know about DC's First Black Adam Trailer