The Harley Quinn Animated Series recently came back for Season 2 just a few brief months after Season 1 finished. This series explores Gotham City through a dark and hilarious lens.

The Harley Quinn show has a deep understanding of numerous iconic DC Comics characters and explores how their twisted psyches might affect them in the most absurd situations possible. It’s Gotham turned up to 11, and it’s a masterpiece. Season 2 is only getting better. So let’s explore the story so far.

It goes without saying but SPOILERS FOR SEASON 2 OF THE HARLEY QUINN ANIMATED SERIES BELOW! 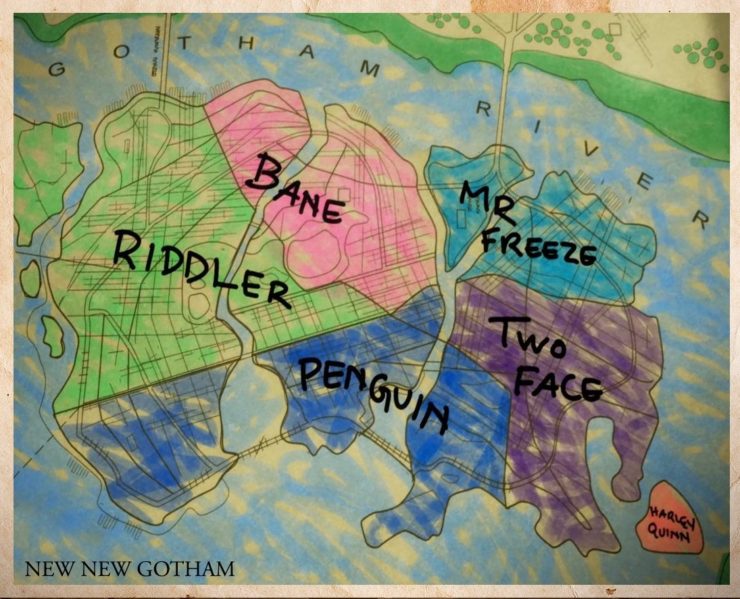 DC makes the perfect move in episode one of the second season of the Harley Quinn Animated Series. In Season 1’s finale, Gotham was completely destroyed and shaped in the image of The Joker himself. He made New Gotham his perfect kingdom. But when Harley and her crew destroyed The Joker’s tower, the rest of the villains planned a new takeover.

They split up the territory and made NEW New Gotham. Harley couldn’t stand the idea of the same old villains ruling everything, and tried to fight back. Instead, Mr. Freeze trapped Harley Quinn in ice for 2 months. TWO whole months!

The writers made a perfect decision jumping the story ahead like this. Two months of pure chaos in New New Gotham means that the audience is going in just as blind as Harley Quinn. We don’t know anything about Gotham anymore. All we know are the characters.

That means that anything and everything is fair game. The landscape can change and the situations can be even more ridiculous. The only thing that stays the same is the characters that we know and love. So, as Harley Quinn fights to take down the other big bads and claim New New Gotham for herself, we can only rely on one thing: This season is going to be leaps and bounds ahead in character development and humor. We couldn’t be more excited.

Episode 2 sees the Riddler create his own University, Riddle U, somehow equipped with the only reliable electricity in the barren, lawless Gotham. It also has clean water! Harley Quinn makes a perfect plan to kill the Riddler and steal his source of energy. But as always, Harley’s plans don’t always work out just right.

This episode shows Clayface doing some of his “best character acting”, where he assumes the role of a college student and commits to it so much that he becomes the most popular girl in school! Her connections with the students help her get all the information and security clearance that the team needs. And frankly, it’s beyond hilarious to see Clayface try and be a girly girl.

It’s very fitting that the Riddler had a University in his part of Gotham. And while we haven’t learned much about each villain’s territory in New New Gotham, we can assume that every territory will have the same unique touch of each villain. All of their dreams and visions will come to life in their carved-up piece of the city.

And while we only got about 100 feet into it, we did get a glimpse of Bane’s territory when King Shark and Dr. Psycho drove through it. It appears that Bane’s thugs are equipped with vials of Venom so that they can be just as strong as Bane at any given moment. Not only that, but Bane’s improved the formula so much that the thugs are also bulletproof! It will be interesting to see how Harley Quinn takes down his territory, or if she’ll even be able to.

Be sure to stick around at the end of Episode 2 for the teaser scene, where we see a familiar hero step up from the shadows… Gotham might never be the same.

While you’re watching the Harley Quinn Animated Series be sure to check out all of our Harley Quinn collectibles, along with the rest of Gotham’s Rogue’s Gallery.