As a self-respecting Harry Potter geek, by now you have probably downloaded the eagerly awaited Harry Potter: Hogwarts Mystery phone app and carved out a spot in your day to dive into the wizarding world once again. With its vibrant graphics, nostalgic music, and intriguing storyline, this is the kind of game we’ve been waiting for since the Sorcerer’s Stone for PC (minus the chocolate frog cards).

Portkey Games is a new label nestled under the family of Warner Bros. Interactive Entertainment, and while the game is not directly written by J.K. Rowling, it is a natural expansion of her online presence with Pottermore, the interactive Harry Potter database. New content on Pottermore has been considered canon since it was released at Rowling’s hand, and with Portkey Games, you’ll get to be the one in control of your own adventure on iOS and Android.

In the game’s well-plotted narrative, your character is a wee First Year circa early 1980s, shortly after an infant Harry defeats You-Know-Who and is sent to live with the Dursleys. Mirroring this early timeline, you have the chance to see younger versions of your favorite professors, as well as familiar faces like Bill Weasley and Tonks. Mining this time period for gameplay means that we get to stay in the realm of Harry’s lifetime and not stray too far from the HP canon. 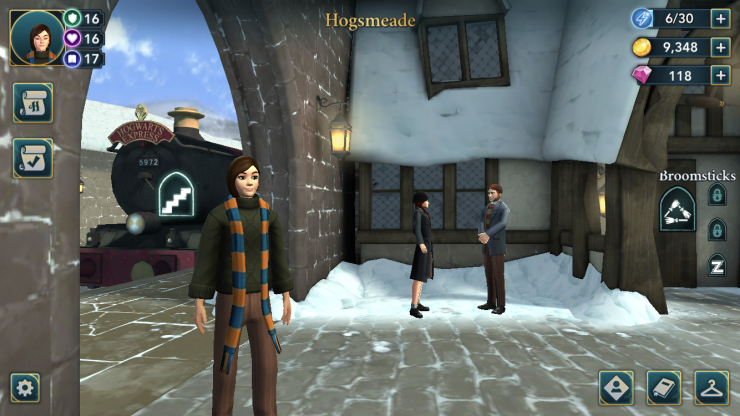 Shortly after arriving at Hogwarts with your new best friend Rowan, you begin to notice you’re the subject of whispers as the younger sibling of Jacob, a rogue Hogwarts student who went mad trying to find the elusive cursed vaults. After his expulsion, he went missing and has not made contact with your character since, but there are rumors he may be in league with Voldemort…

As you tirelessly pursue the mystery of your missing brother by taking up his search for the cursed vaults, you meet new characters along the way, including the Neville Longbottom doppelgänger, Ben Copper, the calculatingly cruel Slytherin, Merula Snyde, and the accomplished potions brewer, Penny Haywood. By building friendships and/or dueling these characters, you earn points for bravery, knowledge, and compassion that dictate which decisions you can make and how your story plays out, while also gathering coins and gems to be spent on customizing your character.

By dueling and brewing your way through the school year, each step you take gets you closer to the chilling corridor that may hold the key to finding your brother. As a Hogwarts student though, you can’t put your academics on hold while solving mysteries: you’ll still be attending classes like Potions, Charms, Transfiguration, and Flying, gleaning magic from these lessons that you can use later in the game play.

For all of its intrigue however, Hogwarts Mystery does have its faults: makers Jam City seem to ruthlessly dig for in-app purchases, limiting the actions you can take while playing with an extremely low energy threshold that can only be brought up by waiting or paying.

Each action you take can cost between one and five energy points, and with an energy bank beginning at twenty-five, there’s really no way to complete a lesson in one fell swoop. Each point you earn takes a full four minutes of waiting, so hopefully you’ve chosen Hufflepuff as your house because you’ll need that virtue of patience to get anywhere in this game. 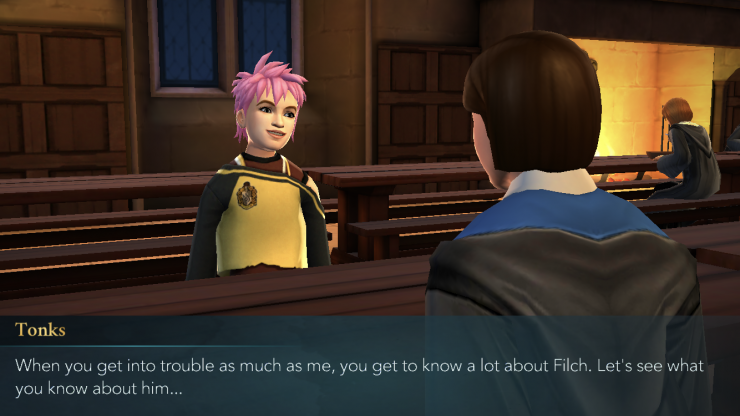 Also, the lessons can be a bit repetitive. Each class has a pre-set couple of scenes and the further you advance in your Hogwarts career, the more stars you need to complete lessons, which basically consist of poking things and dropping your energy points.

They’ll throw in other challenges like the occasional wizarding trivia or the “focus” portion where you need to tap at the right moment, but whether you do well or horribly at these, there’s not much variance in the outcome: as long as you finish the lesson on time, you pass.

So, the pros? Dynamic and original story telling, close to cannon in the wizarding world, and a beautifully crafted castle to explore. Not to mention you won’t shirk responsibilities like laundry and homework while playing since you need to put your phone down every few minutes to gain energy. The cons? Lots of downtime if you’re not willing to shell out the dough for in-app purchases, repetitive activities in class and extracurriculars, and limited free-play. 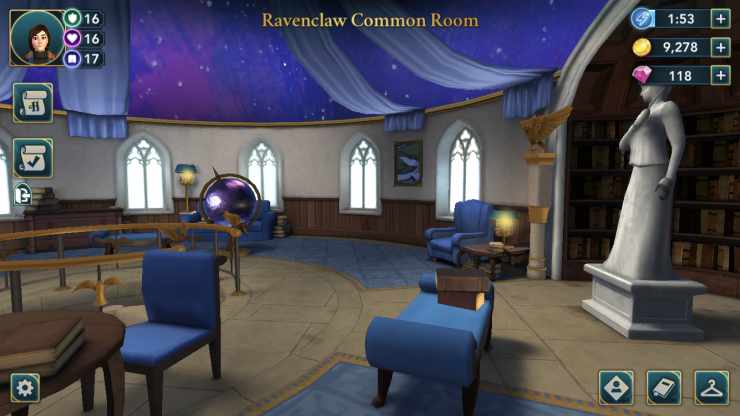 Not to fear though, rumor has it that an update is on the way, and players have many ideas as to what could be coming. Expanding on the choose your own adventure aspect? Romantic Interests? Extended map to interact with?

Whatever it is, if Hogwarts Mystery can model itself after its more mature Pottermore sibling, we will all be in for a treat… As long as it’s not a grass flavored Bertie Bott’s Bean.

Are you playing Hogwarts Mystery?  Let Your Geek Sideshow and share your house in the comments!