Holiday Feast: 10 Most Memorable Meals From the Movies

The holiday season is a time for family, festivities, and feasting on delicious food, which is signature part of the annual celebration – at least that’s what we have learned from the movies that so often use the dinner table as a setting for cinema’s most memorable moments.

For filmmakers, food frequently plays a vital part in scripts, acting as a powerful tool to explore identities and relationships, as well as inciting an exchange of experiences and conversation. With the ability to pack layers of meaning into a single scene, some of the most iconic movie moments revolve around the preparation or consumption of dishes.

We’re not talking about out-of-the-can jalapeños and stale nachos here either; we’re talking about straight-up mouth-watering meals that are served with a significant side of unforgettable acting and plot-twisting dialogue, evoking a range of emotions from jubilation to sorrow and so much more. To celebrate the art of culinary cinema, we have cooked up an extra special list of the most memorable foodie moments from chow-focused flicks. So break out the silverware and sink your teeth into our picks for the greatest cinematic food scenes of all time.

As kids, we were always taught to not play with the food on our plates, and yet, an adult Roy Neary impressively makes an art of it in Steven Spielberg’s Close Encounters of the Third Kind.

After a bizarre experience on the open road, the blue-collar electrician becomes obsessed with a mysterious shape, which invades his mind and disrupts his home life. In one of the most pivotal dinner scenes in movie history, Roy intensely sculpts a pile of mashed potatoes into a mountain, later revealed to be Wyoming’s Devil’s Tower. Roy’s worried family watch on in distress, as his children silently weep for their increasingly distant and delusional father.

We wouldn’t be surprised if your local grocery store experienced an egg shortage following the release of Rocky, as cinema-goers sprinted through checkouts with the ambitious vision of recreating the heavyweight champion’s protein-packed breakfast.

Sure, Rocky may be capable of beating down opponents in the ring, but he certainly doesn’t beat eggs in the early hours of the morning; instead he takes the crack-’em and chug-’em approach. The Balboa beverage is composed of five raw eggs and a serious dash of commitment, which is confirmed as the prize-winning boxer glugs back the stamina-building shake, wearing a yolk-stained sweatshirt, and slams it down on the countertop with a forced belch.

Trust us, it’s a total knockout.

Disney-Pixar’s Ratatouille is a rodent romp with great taste, following in the scurrying footsteps of Remy, a rat who dreams of becoming a renowned chef, as he slices and dices his way around the kitchen of a Parisian restaurant.

Rats in kitchens may not typically be associated with a gourmet dining experience, but in this case it’s a real feast for the senses. In a climatic scene, nefarious food critic Anton Ego is presented with a plate of Remy’s ratatouille, a meal consisting of tomatoes, eggplant, and zucchini. He takes a single bite, his eyes widen, and after a few succulent seconds on the palate, Ego is transported back to his humble beginnings as a child in a heartrending moment that is hard to swallow, as it reminds the cutthroat commentator of the enthusiastic young boy who once found comfort in his mother’s cooking.

So satisfying on every level.

The saying, “You are what you eat,” has never been more true than in John Hughes’ brat pack flick, The Breakfast Club, as five High School students unpack their lunches (and their lives) during a Saturday detention.

Categorized by their cliques, the angst-ridden adolescents bond over their shared hopes, fears, and insecurities, despite being worlds apart in their lunch choices. Supplied with chopsticks, Claire (otherwise known as the Princess) seasons her fancy sushi with soy sauce while Andrew (the Athlete) has a carb-packed picnic of assorted sandwiches, potato chips, cookies, fruit, and a quart of milk. Brian (the Brain) has a mom-sanctioned meal of soup, apple juice, and a crustless PB&J, as Allison (the Basket Case) tucks into an inspired Pixy Stix and Cap’n Crunch combo smashed together between two slices of bread. Meanwhile, Bender (the Criminal) has no lunch at all, offering insight into his home life, as it becomes apparent that the differences in the kids’ food selections reveal just as much about the parents (who packed them) as the troubled teenagers themselves.

Each bagged lunch, or even the lack of one, serves to provide the audience with some very important food for thought. 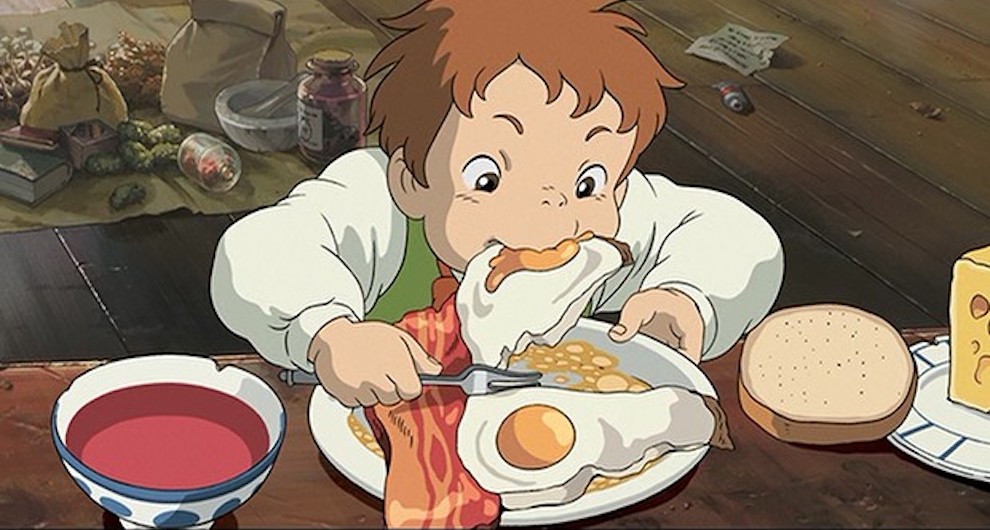 This may not be the most extravagant entry in our memorable movie meals list, but it is a home-cooked breakfast that many of us have indulged in at one point or another, especially in those precious unhurried mornings at home.

So, let us set the table for you: a frying pan bubbling on the stove, thick slabs of bacon sizzling and stacks of egg yolks jiggling, as a hearty aroma fills the air. This scent-sensational scene appears early on in Hayao Miyazaki’s Howl’s Moving Castle after Sophie Hatter wanders into the titular building and helps to prepare breakfast. Once served, Sophie, Markl, and Howl gather around the table in a comforting moment that reminds us of a fleeting family mealtime. It may appear ordinary on the surface, but Miyazaki has the magical ability to open our eyes to the beauty in the banal things in life.

Forget your standard BLT sandwich, Sally Albright is a woman that knows exactly what she wants and it’s anything but basic; even when placing an order in a delicatessen she customizes and rebuilds her meal in a manner that will have you slapping the table and repeatedly screaming, “Yes!”

The unforgettable sandwich scene in the classic 1989 romantic comedy When Harry Met Sally is dished out in Kat’z Deli in New York City. While Sally is eating her highly custom dish, Harry is left eating his words as his counterpart puts on an Oscar-worthy performance in which she fakes an orgasm at the table, immediately following an argument between the pair over whether or not women can be actresses in the bedroom.

Outside of the hoopla, we have to say the food does look pretty tasty, so next time we’ll be sure to have what she’s having in that memorable on-screen moment.

When Henry Hill and his crew of wise guys wind up in the slammer, they’re not only serving time for their criminality, they’re also serving a mouth-watering feast made up of traditional Italian fare on the regular.

While “Beyond the Sea” croons in the background of the famous Goodfellas cooking scene, the inmates prepare a delectable dinner, executed with quality precision and effortless style. Paulie uses a razor for his painstaking method of slicing the garlic so thin that it “liquefies in the pan with just a little oil” while Vinnie takes charge of the onion-infused tomato sauce and Johnny Dio handles the hunks of meat, sourced from Henry who uses his network of connections and methods of persuasion to bag the variety of imported ingredients.

It’s safe to say that we’ve all had our share of unwanted guests from time to time, but they don’t usually travel in packs, with wagging tails and slobbering jowls, ready to gobble down all food in sight.

Unfortunately for the Parker family in the holiday classic, A Christmas Story, the neighbor’s hounds seemed to miss the memo on dinner etiquette, as they barge into the adjacent house and devour the freshly cooked turkey before it is even carved. In a desperate bid to salvage their traditions, the exasperated family head to their local Chinese restaurant for a meal that they’ll never forget, featuring a “smiling” Peking duck (with its head still attached) and a paltry performance of botched Christmas carols.

Oh, there’s no place like home for the holidays.

Vincent Vega may not be afraid of trouble, but he does suffer from serious FOMO in one of our all-time favorite Pulp Fiction food moments, which is pure cinematic gold and worth every penny.

Suited-and-slick, Vincent takes his boss’ wife Mia Wallace for a night of bloody burgers, extortionate shakes, and twisting their way to cult status on the dance floor of Jack Rabbit Slim’s restaurant. Before heading to the powder room, Mia orders a “Martin and Lewis” vanilla-flavored milkshake with a cherry on top (and a five-dollar price tag). Vincent decides he has to have a sip of the big bucks beverage to cross it off his proverbial bucket list, and concludes that it’s “pretty f***ing good.”

It has been recreated countless times over the years, but nothing quite gives us first date goals like the original spaghetti-sauced smooch between pampered pooch Lady and stray mongrel Tramp in Walt Disney’s 15th animated classic.

In one of the most memorable kisses in Hollywood history, the cute canine-couple serendipitously (and swoon-worthily) touch snouts, as they meet in the middle of a shared strand of spaghetti behind a backstreet trattoria. Following all of the beats of a traditional romance, the titular twosome are situated aside the soft glow of candlelight, set beneath a starry sky, being romantically serenaded by Tony’s hearty accordion-rendition of “Bella Notte.”

Is your mouth watering for more?  Place your order in the comments below and let us know your own favorite movie meal scenes!