Holidays at Hogwarts – How the Wizarding World Celebrates Winter

Christmas was coming. One morning in mid-December, Hogwarts woke to find itself covered in several feet of snow. – J.K. Rowling, Harry Potter and the Sorcerer’s Stone

Whether you are dreaming of a white Christmas or not—shoveling snow is a lot easier with spells—most Harry Potter fans are probably wishing for a trip to the magical castle during the holiday season.

Although many Hogwarts students go home for Christmas, Harry consistently, and with three rare exceptions, remains at school during the break. Two weeks of no Dursleys, no classes, splendorous meals, and cozy common room fires is a dream come true for Harry Potter.

His first year at Hogwarts is perhaps the most fantastic holiday celebration of all because readers get to experience that magic for the first time alongside Harry and his best mate, Ron Weasley. Sure it’s dogged by a three-headed Cerberus and a tragically beautiful mirror that shows your deepest desires, but it’s still a lovely experience for The Boy Who Lived.

Enchanting and extravagant, the Christmas feast is the main attraction for the holidays at Hogwarts. Warm snow—manufactured magically, of course—falls from the Great Hall’s ceiling as students as well as professors partake in the juiciest turkeys and sweetest sauces. Drinks include fire whiskey, pumpkin juice, and the ever popular butterbeer.

The treats don’t stop at food, though; silver Sickles (a type of Wizarding World money) are hidden inside the desserts! After Ron and Harry gleefully stuff themselves, they play Wizard’s Chess and open a few school-supplied Wizard Crackers. The latter are full of a range of surprises all the way from full sized gloves to jokes to live mice. Muggle crackers with their plastic toys seem quite boring in comparison! 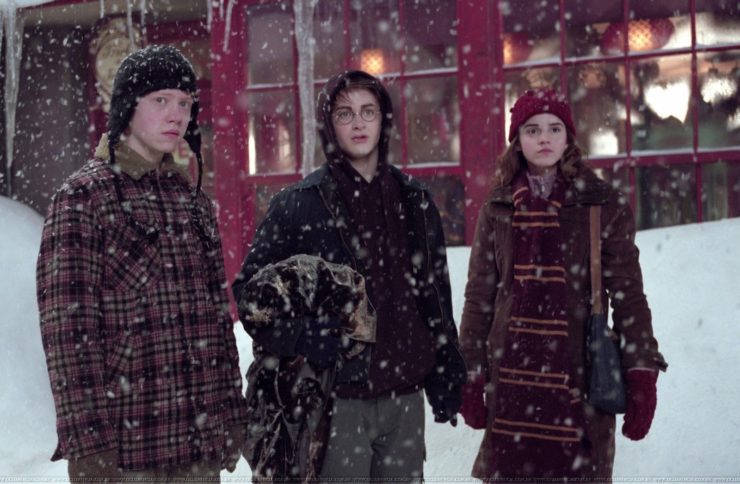 Hogwarts decorates its rooms with twelve giant, singing fir trees, colorful mistletoe, shining ornaments, and many other seasonal staples. In the corridors, suits of armor serenade passerby with carols. In the dormitories, students exchange the most wonderful gifts Rowling could have ever created. Piled at the foot of each child’s bed, the presents are the first proper ones Harry has ever received.

The Weasleys share a holiday tradition of knitted, initialed sweaters that they give to their seven children and Harry. Ron and Harry exchange chocolates and Quidditch-themed books and broom polish. On one especially thrilling occasion, Harry even receives a Firebolt broomstick so he can become a master Seeker. The gifting possibilities are endless when spells are involved.

Who else wishes they could simply accio (summon) a few butterbeers and finish their holiday shopping with the flick of a wand? 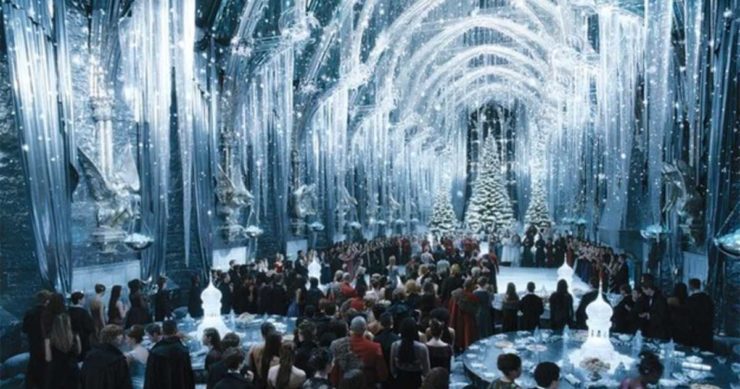 The Wizarding World’s winter parties are grand, too. Whether it’s the Yule Ball or Slughorn’s VIP night, Harry Potter seems to get invited to all the best dances. If he goes to the Burrow—the Weasley residence—they throw a smaller party, as does the Order of the Phoenix whilst they reside in Grimmauld Place. No matter where Harry and his friends and family are, they almost always get a proper Christmas celebration.

Most likely the rest of the Wizarding World celebrates with similar enthusiasm, extravaganza, and effervescence. Each Christmas is marked by happiness and love, and why shouldn’t it be in the magical world? Entertaining relatives would be a lot easier if the family could bond over the gnome they just captured, dressed as an angel, and put on top of the tree.

December is the perfect month to break out a cauldron cake recipe and bake while you listen to Celestina Warbeck and the Banshees. If you don’t like her, though, you can always try the frog choir.

Moore Than Watchmen: Diving into the Library of Alan Moore