The Top 10 How To Train Your Dragon Quotes

Part of the films’ charm, as well, is a script that shines just as brightly as those other visual elements. Below we list and break down the significance of ten of the best quotes in the trilogy.

10. “This… is Berk. The best kept secret this side of, well, anywhere. Granted, it may not look like much, but this wet heap of rock packs more than a few surprises. Life here is amazing, just not for the faint of heart. See, where most folks enjoy hobbies like whittling or needlepoint, we Berkians prefer a little something we like to call—DRAGON RACING!”

—Hiccup, How To Train Your Dragon 2

This is an adorable parallel to the first opening monologue of the series, shifting from pessimistic to playful. Each of the movies would go on to use this kind of narration to establish the time and new lore. While this pays homage to the first film and it’s sweet, it only takes the tenth spot because it’s just that: fluff.

In the last scene of the last movie, Hiccup, Astrid, and their children embark on a journey together. Hiccup recounts how dragons and humans coexisted in his youth while they scour the seas for signs of Toothless.

We don’t know in this moment if they’ll find Hiccup’s long-separated best friend, but it’s a lovely connection of past and present, and an optimistic look to the future of Viking kids honoring their history.

8. “Turns out all we needed was a little more of this.” “You just gestured to all of me.”

—Stoick and Hiccup, How To Train Your Dragon

At the end of How To Train Your Dragon, Hiccup’s stoic, dragon-hating father, Stoick, admits his son may just be the hope for a harmonious Viking future.

—Astrid, How To Train Your Dragon 2

On the cliff top near the beginning of How To Train Your Dragon 2, Astrid expresses excitement that Hiccup will be inheriting the role of chief from his father. But Hiccup craves adventure and wonder, not bureaucracy or leadership.

In a tender moment, Astrid calmly asks Hiccup to reflect within himself, pointing out that his greatness lies in their homeland, not the wild world beyond.

6. “I wouldn’t kill him, because he looked as frightened as I was. I looked at him… and I saw myself.”

—Hiccup, How To Train Your Dragon

The other Vikings react ragefully when it’s revealed that Hiccup refused to kill the deadly Night Fury. But Hiccup begs compassion from them, urging other humans to learn what he has about his new friend.

It’s a great turning point in the film, all created through an intelligent and emotional script.

—Valka, How To Train Your Dragon 2 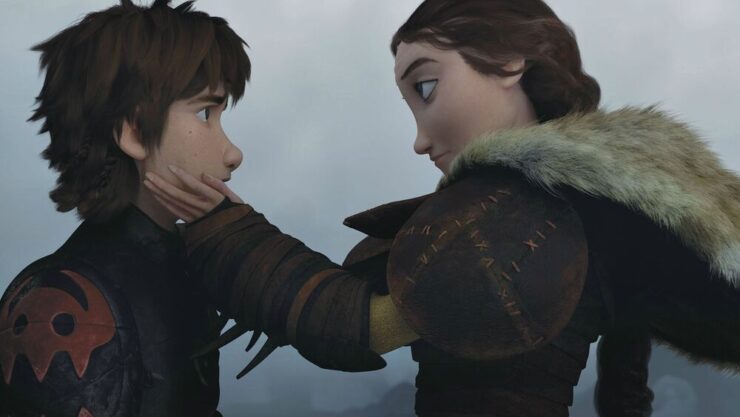 In the second film, Hiccup is struggling between his heritage, responsibilities, and dreams. He feels more loyalty to the dragons, but knows he needs to lead, or at least be with, his people. This struggle is externalized when he meets his mother Valka, the seeming opposite of Stoick’s personality, rules, and ambitions. She is a dramatic dragon rider capable of great empathy like her son.

Sadly, Stoick loses his life protecting Hiccup during a final, fateful battle against dragon trappers. In the aftermath, Valka speaks to Hiccup, reconciling both pieces of himself.

4. “Go on, bud. Lead them to the Hidden World. You’ll be safe there. Safer than you could ever be with me. It’s okay. I love you too. And I want you to be free. Our world doesn’t deserve you. Yet.”

However, it’s an emotionally fitting resolution to the story, and this quote exemplifies Hiccup’s careful consideration of the situation while also helping us understand that while it hurts, it’s still the best ending for everyone.

3. “This is Berk. It’s twelve days north of Hopeless, and a few degrees south of Freezing to Death. It’s located solidly on the Meridian of Misery. My village. In a word, sturdy. And it’s been here for seven generations, but, every single building is new. We have fishing, hunting, and a charming view of the sunsets. The only problems are the pests. You see, most places have mice or mosquitoes. We have… dragons.”

—Hiccup, How To Train Your Dragon

This quote is a masterclass of an opening monologue. It establishes place, tone, story, and lore in a few well-delivered sentences. Hiccup narrates the start of the franchise over a greyscale cliffside, with Vikings preparing for a deadly battle with dragons.

It’s tense, but also exciting. We have some idea what we’re in for, but we’re also anticipating something entirely new and amazing.

2. “But with love comes loss, son. It’s part of the deal. Sometimes it hurts, but in the end, it’s all worth it. There’s no greater gift than love.”

—Stoick, How To Train Your Dragon: The Hidden World

In the third movie, we see Hiccup dealing with his father’s death and remembering his childhood, reflecting on how he has come to be the chief and dragon rider we see today.

In one particular flashback, Stoick mourns the loss of his wife Valka. Hiccup asks if he’ll have a new mom, and Stoick answers no, that she was the only one. Then he gives this gorgeous advice, truly highlighting a theme from throughout all three films: that love is the answer, and love conquers all.

1. “Legend says that when the ground quakes or lava spews from the earth it’s the dragons. Letting us know they’re still here. Waiting for us to figure out how to get along. Yes, the world believes the dragons are gone, if they ever existed at all. But we, Berkians, we know otherwise. And we’ll guard this secret until the time comes when dragons can return in peace.”

This quote finishes the final film and, more importantly, finishes the entire trilogy. It’s a mirror of the opening monologue from the first movie. It summarizes the themes of family, peace, and love.

There was not a dry eye in the theater when Hiccup spoke, with such pride and passion, of an ideal age. And for those reasons, this quote takes the #1 spot.

What is your favorite quote from the How To Train Your Dragon franchise? Don’t forget to Let Your Geek Sideshow and tell us if we missed any in the comments!