Back in August, the comic book United States of Captain America introduced a whole roster of new heroes taking up the Captain America persona, including a Native American Cap, Joe Gomez of the Kickapoo Tribe. Joe’s story is written by Lipan Apache writer and Earth scientist Darcie Little Badger and the art is done by Qalipu Mi’kmaq First Nation artist David Cutler.

Then, in November 2020, Marvel’s Voices: Indigenous Voices #1 was published, featuring selected stories from various characters. When the heroes we love are given a wider variety of identities and experiences, audiences have a greater chance for connection. That’s why representation is such a vital tool in the creative process.

Next month, with the premiere of Marvel’s Hawkeye on Disney+, Echo will become the first Native hero to be a leading star in Disney’s live-action super hero media. So in honor of Indigenous Peoples’ Day 2021, let’s take a look at other Marvel super heroes who are Native, First Nations, and/or Indigenous. 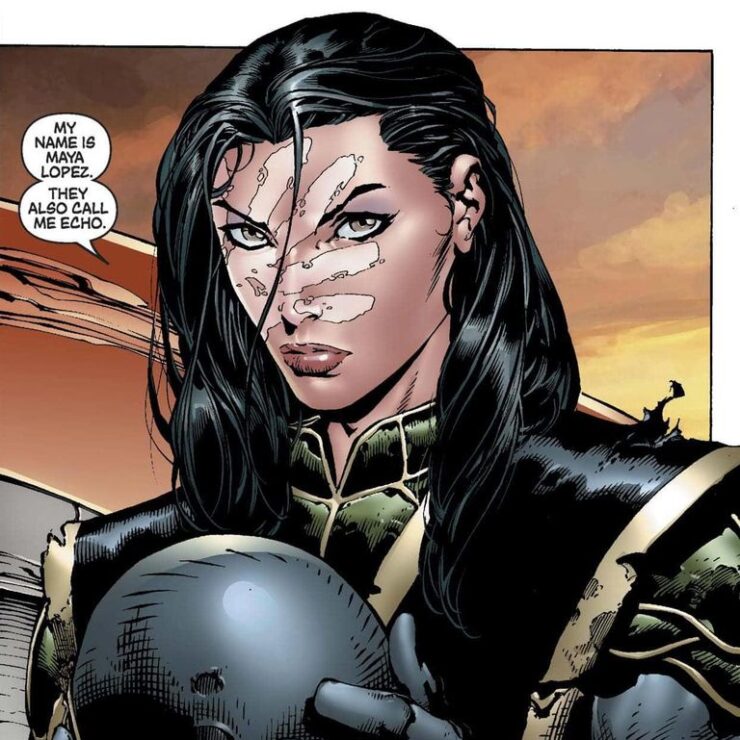 Maya Lopez, a member of the Cheyenne Nation, will make her screen debut, played by Alaqua Cox, in Marvel’s upcoming Disney+ series Hawkeye before getting her own solo MCU series. As Echo, Maya uses her photographic reflexes to mimic anything she sees — making her a formidable adversary. When her father was killed by his business associate, Kingpin, he left a bloody handprint across Maya’s face. She wears this handprint throughout her tenure as a hero, and it can also be seen as a powerful symbol of the missing and murdered Indigenous women, girls, and Two-Spirit people.

Maya has been closely affiliated with Daredevil, she’s defeated Madame Hydra, and with the Avengers she once operated as Ronin, a guise Clint Barton also has shared. In addition, Maya will be getting her own solo comic series called Phoenix Song: Echo, written by Rebecca Roanhorse and Luca Maresca, after the Phoenix Force recently chose Maya to be its newest host. Her powers of mimicry make her potential as a hero nearly limitless. 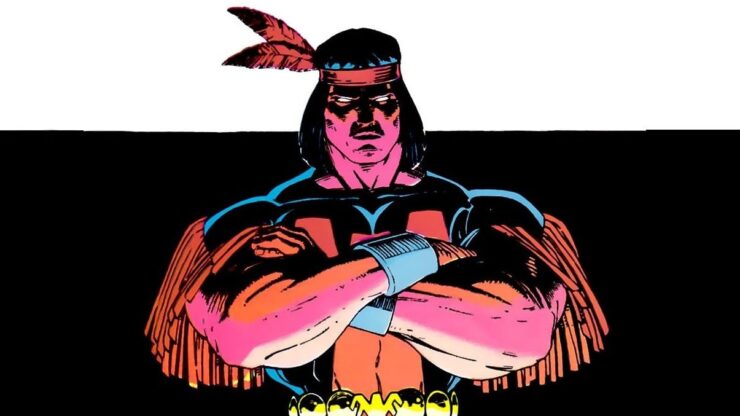 John Proudstar of the Apaches is a legendary figure in the history of the X-Men. He was part of the second wave of X-Men (under the name Thunderbird) in 1975 that also brought in Storm, Wolverine, Nightcrawler, Colossus, Sunfire, and Banshee. Thunderbird’s mutant powers included super strength, stamina, and durability. However, true to his name, John’s tragic flaw was being driven by the need to be the best; he wanted to live up to the proud legacy of the Apache warriors before him.

As a result, at the end of a mission he sought to take down an escaping enemy and caused his own death in an airplane explosion. His death was a turning point for the young mutant team and the memory of Thunderbird would continue to live on. 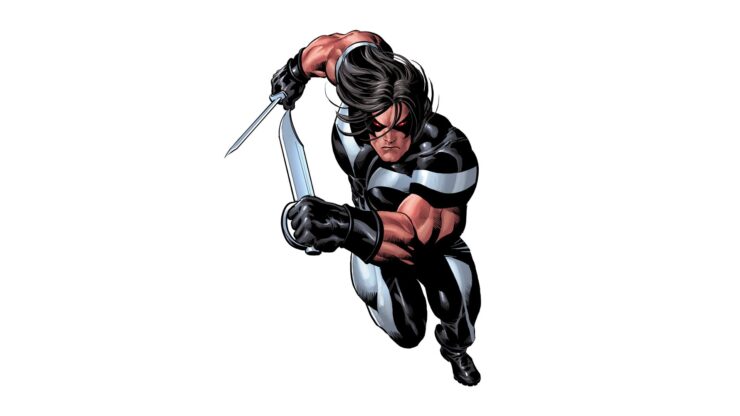 As it turns out, James Proudstar, John’s younger brother, would also develop similar mutant powers. Holding Charles Xavier and the X-Men responsible for his brother’s death, James joined Emma Frost’s Hellions and soon became a frequent opponent of the New Mutants. Over time, he grew connected to Dani Moonstar and decided to leave the Hellions after accepting his brother’s death. In retaliation, they massacred everyone on his Apache reservation.

James accepted Cable’s offer to join X-Force and he took on the name Warpath. As Warpath, he would fight alongside the X-Men and the Weapon X mutant rescue team. His powers even expanded to include flight, acute tracking senses, a healing factor, and Apache shaman abilities. 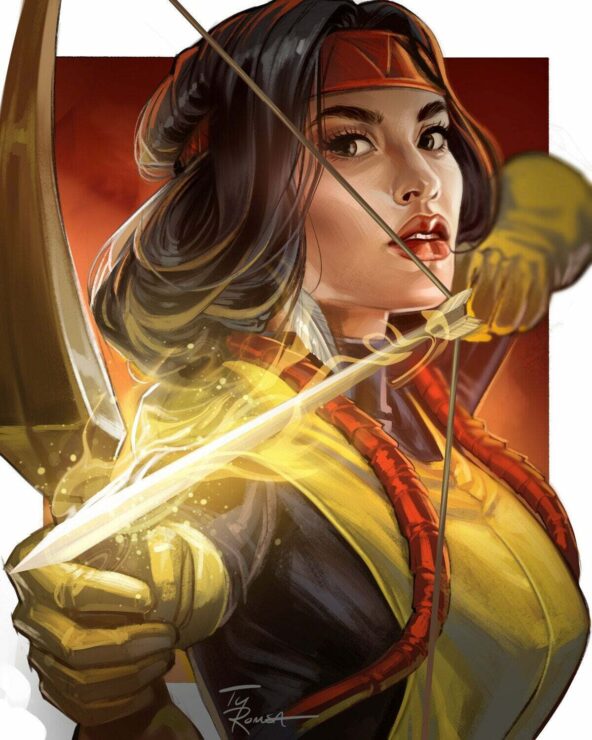 Danielle Moonstar, a mutant from the Cheyenne Nation, has truly grown into a capable and talented leader even though her beginnings were full of turmoil. Dani can tap into the fear of those around her and manifest those fears into horrifying images. This originally caused her to be ostracized from her community, especially after her parents’ disappearance. After her grandfather’s death, Dani reluctantly honored his wish for her to join Xavier’s mutants.

With the New Mutants, Dani learned to control her powers and even expand them to tap into people’s subconscious desires. Dani adopted the name Mirage and she also learned to focus her psionic energy into arrows as well as developing a semi-telepathic connection with most animals. Dani has also wielded the power of the Valkyries after bonding with Brightwind, a winged horse. 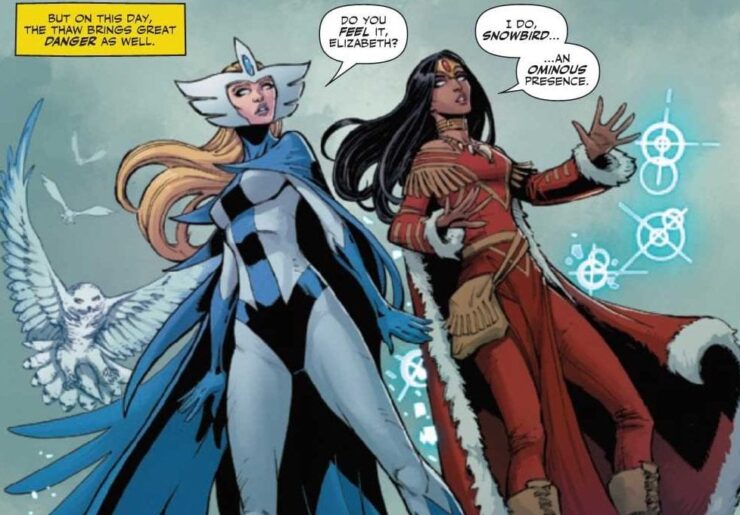 This team of Canadian operatives has always included First Nations heroes among its members. Alpha Flight is a group that is organized by the Canadian government into three tiers: Gamma, Beta, and Alpha. One of its original members, Snowbird, is the daughter of a mortal man and the Inuit goddess of the Northern Lights. Snowbird is able to transform into any Arctic animal and use that creature’s skills as well as heal herself and fly. She was raised by a Tsuut’ina Nation surgeon named Michael Twoyoungmen (coincidentally, he also helped Snowbird’s mother give birth).

Together, they were recruited onto Alpha Flight. As Shaman, Michael is well versed in a wide range of nature-based sorcery. His formerly estranged daughter, Elizabeth Twoyoungmen, takes up the name Talisman — she can communicate with spirits and when wearing the Coronet of Enchantment, she has access to impressive magical and mystical abilities. 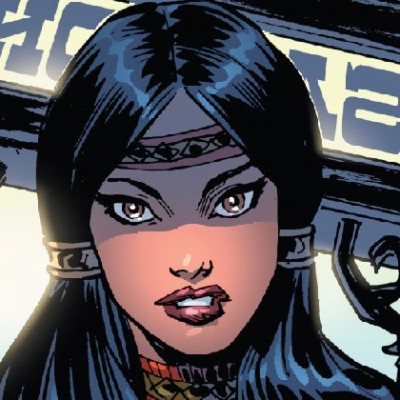 A member of the Blackfeet Nation, Silver Fox met Logan before he became Wolverine. She had been recently widowed when she became involved with Logan. They lived happily together for a time in their home in the Canadian Rockies, close to the town of Mount Logan, Yukon. Unfortunately, Victor Creed, AKA Sabretooth, soon entered their lives and from there Silver Fox would continue to encounter heartbreak.

After being left for dead, she became part of the Weapon X program alongside Wolverine and Sabretooth. Eventually, she defected to become a terrorist for Hydra and later, the Hand, with whom she ordered Logan’s lover, Mariko Yashida, to be poisoned. She would eventually take down the Weapon X Program but, sadly, she was murdered by Sabretooth. Wolverine buried her near their former mountain home. 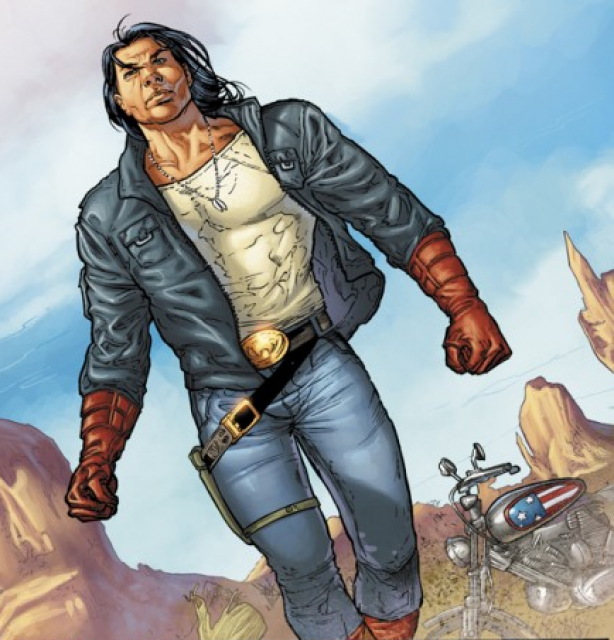 Jason Strongbow was a Navajo man who helped lead the Navajo Nation against the excavation of a sacred mountain, first through court and then with peaceful protest. When the peaceful protest took a wrong turn and Ulysses Klaw revealed himself to be behind the excavation, Jason and his brother Ward were exposed to Klaw’s sonic blasts as well as an unknown isotope of uranium.

As a result, Jason gained superhuman physiology and senses, and he decided to become American Eagle, in honor of the namesake guardian of the skies. Ward followed Klaw to the Savage Land where he would eventually be killed in an attempted rescue mission. American Eagle was active during Civil War as well as more recently with the contest to become the Phoenix Force’s host. 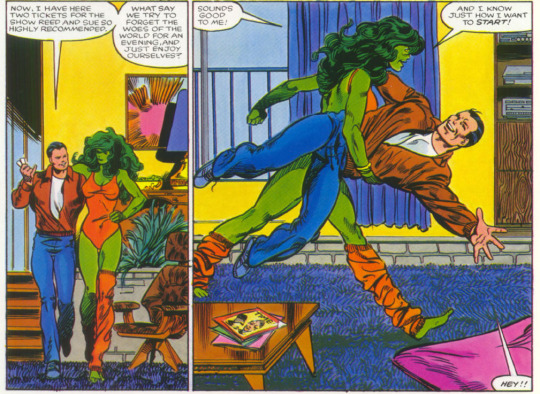 Wyatt Wingfoot, a member of the Marvel universe’s Keewazi tribe, has proven again and again to be both brave and trustworthy. Despite not having any mutant or superhuman abilities, Wyatt does descend from the valiant warriors of the Comanche Nation. Wyatt is also a steadfast friend and valuable ally to the Fantastic Four.

In college, he and Johnny Storm were roommates and quickly became best friends. Wyatt would accompany Johnny and the rest of the Fantastic Four on a mission to Wakanda, unexpectedly helping their success, before embarking on a wild voyage chasing down the Inhuman dog Lockjaw with Johnny. When they returned, Wyatt grew close with She-Hulk and over the years they have joined each other on many adventures as well as shared an enduring romance. 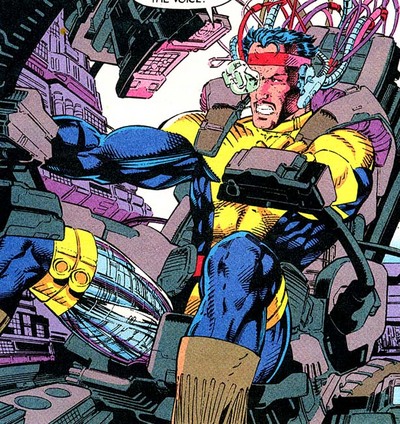 Forge has gone through many affiliations over the course of his life. He is from the Cheyenne Nation and was trained in the mystical arts bye a shaman of his tribe. However, after serving in the Vietnam War, he stopped using these abilities and began working for the government to develop weapons in Tony Stark’s place. Forge’s other notable ability is the ability to perceive the mechanic energy of technology, enabling him to intuitively understand it and create impressive technology of his own.

With this ability, he created devices capable of detecting mutant and extraterrestrial powers as well as neutralizing them. This invention brought him into contact with the X-Men and Forge would soon enter a tumultuous relationship with Storm. Later, he would join and lead X-Factor, as well as becoming close with Mystique and reclaiming his mystical potential. 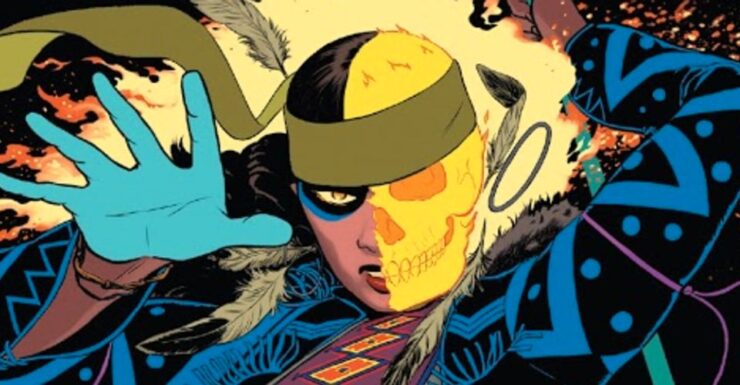 Kushala, like so many others, first came into her great power through the worst agony and heartbreak. In the 19th century, her Apache tribe was attacked by the U.S. Army and her parents were killed. Overcome by her rage, she calls out and is heard by a spirit of vengeance, and soon she is bonded to the demon force. Though she now possesses abilities similar to Ghost Rider, Kushala seeks to release herself from the spirit by studying as many forms of magic and sorcery as she can find. In her era, she even became the Sorcerer Supreme.

She continues to roam the world as Demon Rider, even aiding Ghost Rider on a journey of his own to reclaim his imperiled soul. Recently, she was recruited by Doctor Strange. Kushala’s immense power, and the wide range of sources from which she draws that power, makes her a leading candidate to become the next Sorcerer Supreme.

In a world where systems are slow to change, the victory of representation can feel like a hard-won battle. When our identities and experiences are reflected on the big screens or across the inked panels, our stories grow stronger and so do we. Here’s to more representation.

Which Native, Indigenous, or First Nations hero stands out to you? Who did we miss? Let us know in the comments, and don’t forget to Let Your Geek Sideshow!