Discontinued, a Comedy Dynamics special brought to you by the same team behind the hit Netflix documentary series The Toys That Made Us, is set to premiere on the CW Network on December 16th, 2018.  This series is a funny and informative, “Where are they now?” for some of the world’s most famous and infamous discontinued cultural phenomena- food, toys, businesses, and more.

Hosted by YouTube star and self-proclaimed “black nerd” Andre Meadows, viewers will take a trip down memory lane as they recount the rise and fall of these absent pop culture titans.  Discontinued will feature special surprise guests, insider experts, and even comedians as they discuss and break down some serious nostalgia in a never-before-seen way.

Ahead of the series premiere of Discontinued on the CW, Let Your Geek Sideshow had the opportunity to sit down with series creator, executive-producer, and director Brian Volk-Weiss to talk about pop culture of days past, diving deep into nostalgia, and “the ones that got away.” 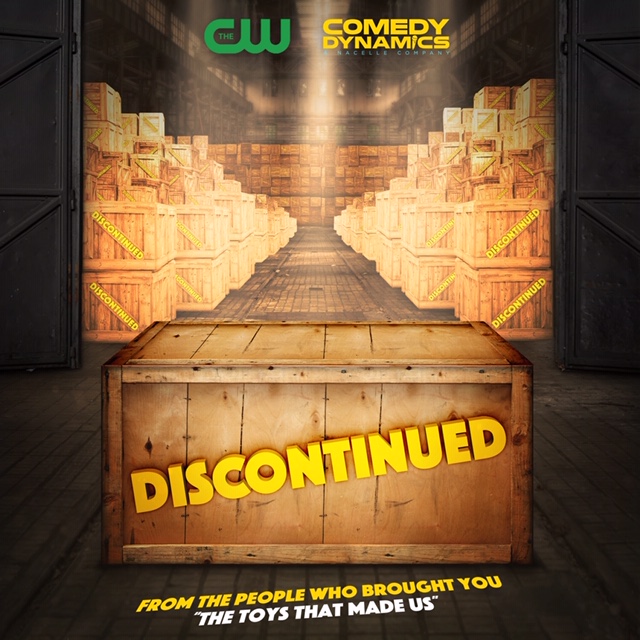 GEEK: Imagine we know nothing about this show- in your words, what is Discontinued about?

BRIAN VOLK-WEISS: Discontinued is a show that focuses on people, places, things, and products that were super famous.  They existed for decades and decades, some even over a hundred years, and then for one reason or another they were gone.  This series is about what those things were, how they came to exist, and most importantly, why they have been discontinued.

GEEK: What inspired the broader scope for this series when compared to The Toys That Made Us?

BRIAN VOLK-WEISS: One thing I do like to tell everyone is that I had this idea long before Toys.  This idea came first, and I think that the success of Toys is the reason why this show is being made in 2018, as opposed to earlier years.  The second thing is that about 5 or 6 years ago, I was in a vintage thrift store, and I saw that R.O.B. robot toy that Nintendo used to have about 30 years ago.

I saw that and realized I never had one, and I didn’t know anyone else who actually had one growing up, but I was looking at it like, “I know what this is.  I know what the name is.  What happened to this?” It was so big at one time. And that’s just what really got me digging into this whole world.

For The Toys That Made Us, one of the criteria we used for picking the toys was essentially, “I want to do an episode about a toy that launched in 1972 and is still being made in 2018.”  But [Discontinued] is the opposite- I really wanted to focus on these iconic things that are gone now.  That’s really what R.O.B. did for me.  I got home and googled it for an hour and learned as much about it as I could.  That’s what the inspiration was.

GEEK: Since our fanbase is largely made up of collectors, the idea of things that are discontinued or “the one that got away” is a bit of a sore subject for many people.  Do you have your own personal ones that got away in terms of collecting?  Something that you missed out on and can no longer find?

BRIAN VOLK-WEISS: Oh man, I’ve got a lot of those!  I’d say the two things I always wanted that got away from me, were the G.I. Joe Hovercraft and also the Cobra Hydrofoil.  I actually got the Hydrofoil two years ago, finally, but I still do not have the Hovercraft.

Another thing I always wanted but still don’t have is Laser Tag.  I always loved that black pistol and the white rifle.  I liked the game just fine, but I loved the designs of the blasters.  I just thought the designs were beautiful, and I never had either of them.  So that’s definitely very high on my list as well.

GEEK: While The Toys that Made Us was more about discovering what we had, Discontinued seems more about what we don’t have anymore. What’s tonally different between this and The Toys That Made Us?

BRIAN VOLK-WEISS: One of the big differences is I did not want to make The Toys That Made Us: Discontinued Edition. I really wanted to make a different kind of show. So, one of my favorite shows in the history of television is Mystery Science Theater 3000- I’ve seen every episode, I think it’s the greatest thing ever. Discontinued is like an homage to MST3K.  It’s also got a little Totally 80’s, Totally 90’s in it.

I really just wanted to make a fun show that would be brain candy, you know? You would watch it, you would pick up some cool nuggets of knowledge, but at the same time it didn’t just feel like a straight history lesson.  It’s got a lighter tone.  I know Toys was pretty funny, but like I said, this is a little goofier.

We also had on-air comedians on Discontinued, which we didn’t do with Toys.  I have a background in comedy, so it was also great to have all these great comedians giving their takes on these different things.

GEEK: So do you think there’s a broader appeal or reach for this series, since it branches out beyond just toys into cultural phenomena and other famous things?

BRIAN VOLK-WEISS: I mean, it breaks my heart to say this since I’m such a toy fanatic- one of the things we cover in the series is Blockbuster, and I bet you a million more people went to Blockbuster than ever played with He-Man figures.

He-Man fans hate hearing this, but Masters of the Universe is pretty niche.  But with Blockbuster, I would say there are hundreds and hundreds of millions of people that have ever been inside of one of those stores, and now miss it.  So yes, I would say this is accessible for a broader audience.

GEEK: Apart from Blockbuster, are there any other hints about what people can expect to see on the series?

BRIAN VOLK-WEISS: I don’t want to give away everything, but we do get into the Talking Chihuahua from the Taco Bell commercials- Gidget was her name.  A lot of people think the dog was a guy, but those who watch the show will learn it was actually a girl.  We cover Speak N’ Spell.  One of my favorite things, we get into the first Humvee that Arnold Schwarzenegger willed into existence.  So, there’s a few things you can expect to see.

We’re not trying to find little niche, weird, obscure stuff.  Maybe we’ll save that for Season 25.  Right now, we want to make big deep-dive stuff that everybody knows about.  They at least know the name, but we want everybody to know the details of how these things came about and where they went.

GEEK: Is there anything else you want new viewers to know about Discontinued, whether or not they’re familiar with your past work?

BRIAN VOLK-WEISS: You absolutely do not need to have seen any other show we’ve made to appreciate this one.  It is fully standalone.  But two things- One, I worked with a great crew, one of the best crews I’ve ever worked with in my life, and it was awesome.  Truly a magical, fun experience working with the crew that we had.

Two, it’s on the CW, so unlike streaming platforms where you can just watch all the episodes at any time, you actually have to tune in to see the show. It airs December 16th at 9:30pm ET, so I hope as many people tune in live as possible.

We would like to give a huge thank you to Brian Volk-Weiss for giving us some insight on this exciting new series.  Discontinued premieres on Sunday, December 16th at 9:30pm ET on the CW network.  Be sure to tune in and get some new insight on all your favorite fallen titans of pop culture!

Will you be watching Discontinued?  What bygone trends, phenomena, and businesses do you hope to see explored in the series?  Let Your Geek Sideshow and tell us in the comments below!

Ian Ziering Cast as Blue Devil in DC's Swamp Thing, Netflix Developing I Am Not Okay With This Series, and More!