Jaws swam into theaters 45 years ago on June 20, 1975, wading into uncharted waters with the first-ever summer blockbuster.

Buoyed by Steven Spielberg, the classic creature feature took a big bite out of the box office, anchoring the top spot on the list of highest-grossing films until the release of Star Wars in 1977. Despite Jaws becoming a huge success, its production faced more troubles than the beach dwellers at Amity Island.

From malfunctioning mechanical sharks to script revisions and stretched out shooting schedules, Jaws was far from smooth sailing behind-the-scenes. So grab a lawn chair, pour a thermos of hot beverage, and dive into The Making of Steven Spielberg’s Groundbreaking Summer Blockbuster. 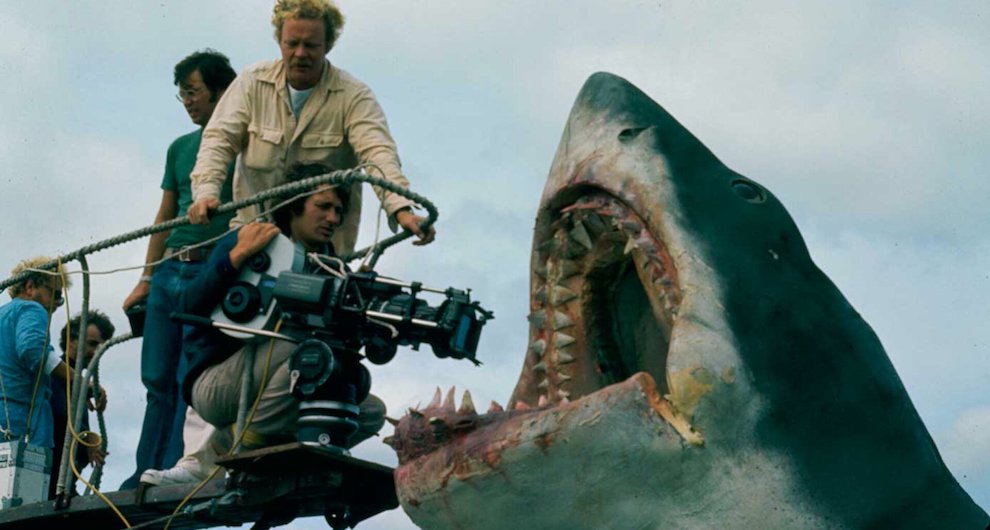 Four years before pioneering the summer blockbuster with Jaws, Steven Spielberg made his feature full-length directorial debut with Duel, an intense road movie starring Dennis Weaver, which reportedly had a play on the production of his next “monster” movie (albeit a very different beast).

Spielberg apparently grew reluctant over making Jaws, in fear of becoming typecast as the “truck and shark director” while he was still so early on in his filmmaking career. In fact, he tried to pull out of directing it altogether, but Universal held him to his contract and he ultimately stayed with the project. 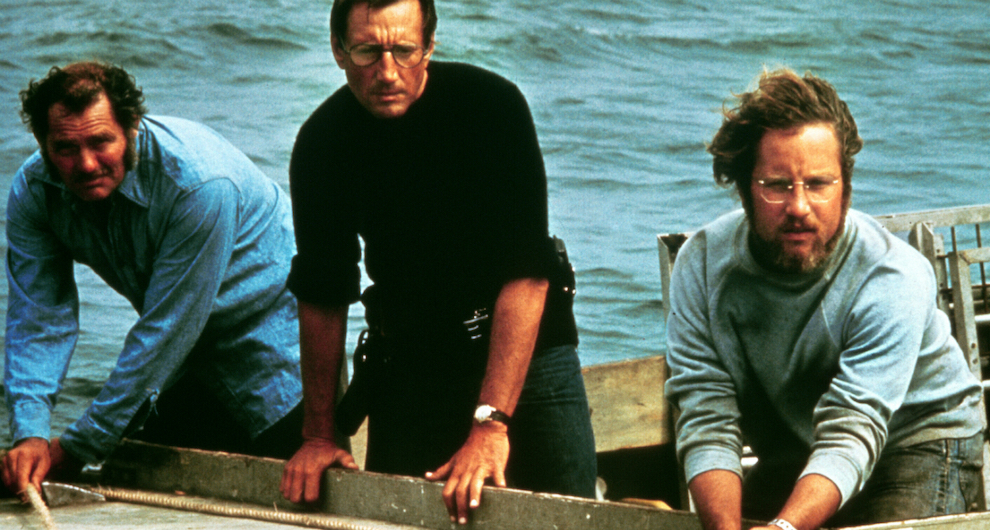 From the beginning, Spielberg planned that the superstar of the film would be the shark. This was just as well since he had great difficulty finding the stars and getting them to sign on. The role of Chief Martin Brody was offered to Robert Duvall, but the actor was only interested in playing Quint.

Once he was crossed from the list, Spielberg found Roy Scheider, who was one of the only actors that had a genuine interest in taking a part in the picture. He was eventually cast as Brody, but the other leads, Quint and Hooper, proved to be more problematic.

Nine days before the start of the production, Spielberg still hadn’t found any actors who would agree to play Quint or Hooper, though plenty had turned the roles down. However, just at the right moment, Robert Shaw decided to sign up as Quint at the persuasion of both his wife and his secretary.

Further to this, Richard Dreyfuss, who initially passed on the role of Hooper, had a change of heart and accepted the part after he grew concerned that the film he just starred in, The Apprenticeship of Duddy Kravitz, was going to live up to (some part of) its name and be a total dud at the box office.

The Script Was Rewritten Several Times During Production 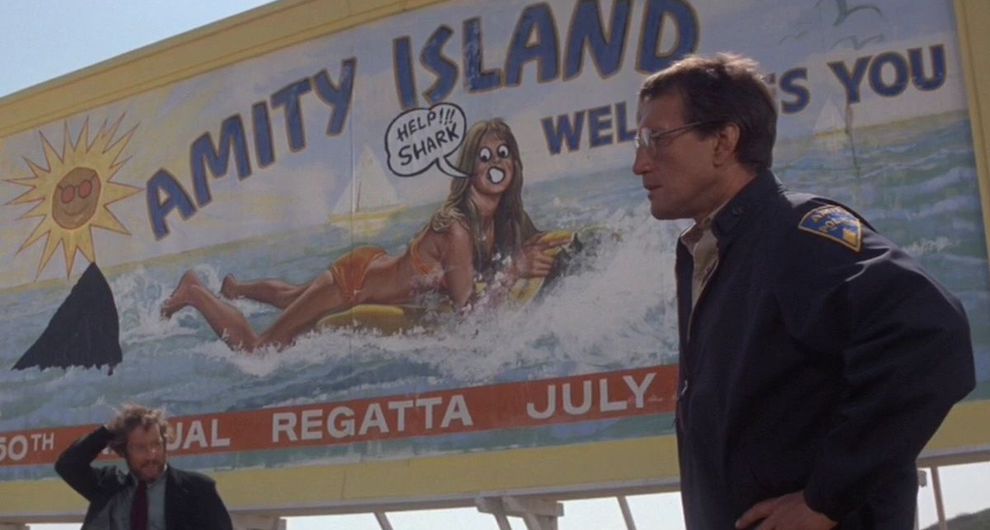 Jaws “started filming without a script, without a cast and without a shark,” according to Richard Dreyfuss, one of the main stars of the classic blockbuster. In fact, many of the scenes were improvised, as the producers had given the production the green light before any type of script was finalized.

Peter Benchley, the author of the original novel that inspired the film, penned the first drafts of the screenplay before passing them over to actor-writer Carl Gottlieb, who rewrote the script during principal photography. He worked on it on an ad hoc basis, writing scenes a few hours before they were shot.

Most nights, Spielberg and Gottlieb would get together to discuss the script and fine-tune their ideas for the next scenes on the shooting schedule. In the mornings, Spielberg would then read over the scripts to familiarize himself with the material before heading out on to the set for the day.

‘Bruce’ the Mechanical Shark Didn’t Work for Many Months

While the movie was in development, the team had to figure out a way to conceive the carnage created by the giant shark lurking at the center of the picture. Art director Joe Alves and effects designer Bob Mattey were tasked with producing three mammoth models, but they had infinite issues with them.

A sketched prototype of the not so Great White in Joe Alves: Designing Jaws shows the meticulous level of detail that went into the design and creation of the shark, nicknamed “Bruce” after Spielberg’s lawyer, however, the mechanical elements of the model repeatedly malfunctioned in the water. 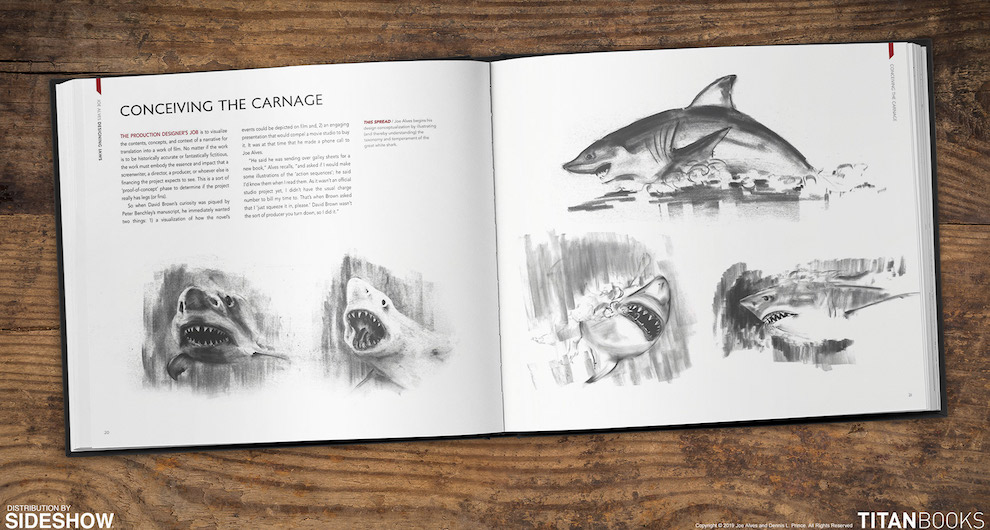 “I remember being on set for the first shark test, and it simply sank,” producer David Brown said in The Making Of Jaws. “We thought our careers in motion pictures had gone with it. Everything that could go wrong with the shark went wrong.” Steven Spielberg concurred that the shark was “frustrating.”

For that reason, the main antagonist doesn’t make an appearance in the movie until the one-hour and 20-minute mark.

The Shooting Schedule Stretched From 55 Days to 155 Days

The crew nicknamed the picture “Flaws” due to all of the difficulties that were encountered while shooting the film. Many of the problems that floated to the surface were a result of Steven Spielberg’s insistence of filming out in the middle of the ocean, resulting in a busted Bruce and a sinking ship.

“I was naive about the ocean,” Spielberg told Entertainment Weekly. “I was pretty naive about Mother Nature and the hubris of a filmmaker who thinks he can conquer the elements was foolhardy, but I was too young to know I was being foolhardy when I demanded that we shoot the film in the Atlantic Ocean and not in a North Hollywood tank.”

Initially, Spielberg was said to have set a shoestring budget of $3.5 million and a shooting schedule of 55 days, but that budget rapidly escalated to $12 million and it took 155 days to complete production. The director frequently referred to the shoot as a “nightmare.”

Fortunately, that “nightmare” turned into one of the greatest films ever made.

Fin! We’re now casting the net out to our readers — so tell us, which of these behind-the-scenes secrets surprised you the most? What do you love about Jaws (minus its production flaws)? Let Your Geek Sideshow and tell us in the comments below!