[SPOILER ALERT: The following contains spoilers for Episode 6 of Loki on Disney+]

If you blinked, you may have missed the entire season of Loki. The time-traveling, universe-hopping show flew by. The finale came and went as quickly, revealing so much, such as character arcs and new villains. But most importantly, the finale pushes the MCU in a brand new direction — one we cannot wait to see more of.

Want to geek out over the biggest OMG moments of the finale of Loki? Let’s get started. 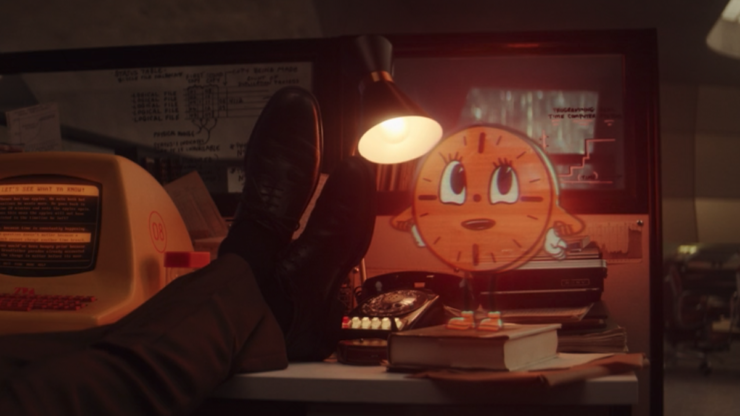 Okay, who called this one? Which brainiac saw right through Miss Minutes’ (Tara Strong) creepy, vacant expression and knew she was up to something? Until the finale, we scrambled to decide which villain theory was most sound. There were so many logical options as to who was really behind the Time Variance Authority (TVA). I have to admit, I didn’t think Miss Minutes was the one pulling the strings behind the TVA — she isn’t, but she’s not as innocent as many of us thought, either.

The artificially intelligent digital assistant has been working for someone much more powerful than the TVA or the Time-Keepers. She was created by Marvel’s next Thanos … which leads us to our next big OMG moment of the finale …

Kang Is Behind the TVA

It’s hard to imagine a better villain than Thanos. Josh Brolin truly brought the character to life, and Kevin Feige and the Russo brothers were smart to set up the Mad Titan almost since the start of the MCU. With the Infinity Stones, it seemed like no one — not even all the Avengers and their allies — stood a chance.

But, that was then. Phase Three is a thing of the past. Loki has given us a new antagonist.

So, who was waiting for Loki and Sylvie in the larger-than-life castle at the end of time? It was none other than Kang the Conquer. Sort of.

Like the plethora of Loki variants we saw throughout the series, it turns out the man behind the TVA was Kang (Jonathan Majors), but just one particular version of the Marvel villain called He Who Remains. This version of Kang explains that he was a scientist from the 31st century in another universe who discovered the multiverse and variants of himself; for a while, he and Kang variants were at peace, sharing knowledge to better their worlds. Soon, he continued, some versions wanted more power, and thus began a multiversal war. He used Alioth to end the war and set up the TVA to ensure it’d never happen again.

The scariest thing about He Who Remains isn’t a gauntlet or physical power. It’s his unrivaled intelligence and control. Kang is too smart, all-knowing, and controlling (you’d have to be a control freak to run the TVA). But that’s nothing compared to who the Lokis will have to face if they kill him. He Who Remains warns if they kill him, they will only bring about another multiversal war and a much more frightening version of himself. One who will use his wit and control to dominate every universe. 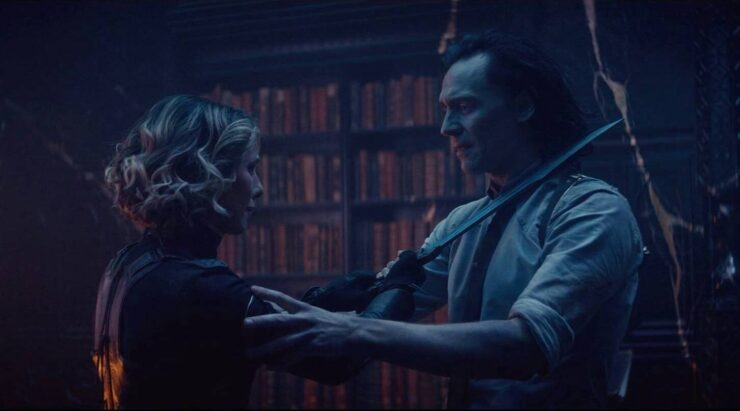 At the start of the Disney+ series, Loki was less of an antihero and more of a straight-up villain, one who had just attempted to conquer New York. His selfish motives resulted in death and destruction.

People change. Getting your own show does that to you. And while it didn’t look too promising for Wanda Maximoff, who was completely absorbed in the Darkhold at the end of her show, things are looking up for Loki. A multi-universe war is coming, sure, but the Asgardian prince is a changed man, a better man.

Loki does everything in his power to convince Sylvie to spare He Who Remains. They should at least listen to the madman’s words. See, it isn’t the idea of ruling the TVA that convinces him to save Kang. It’s the fate of the world, all worlds in all universes, that he considers. He understands what’s at stake if they act carelessly. It’s a full-circle character arc. The finale of the series gave us a Loki much like the one who died in Endgame.

It’s too bad Sylvie hasn’t undergone any drastic change — not enough to do anything more than share a kiss with Loki. So, she sends Loki flying through the timeline, doesn’t consider the consequences, and selfishly kills the Kang variant.

The Multiverse of Madness Is Right Around the Corner

Darn it. We didn’t get to see Mobius ride off into the sunset on a Jet Ski!

We did get to see something awesome, though: the collapse of the Sacred Timeline. After Sylvie kills He Who Remains, the timeline is destroyed (like he promised), thus bringing about the multiverse of madness. It’s exactly why we don’t see Mobius in his beloved ’90s, drinking Jostas and riding Jet Skis. Turns out Sylvie sent Loki to another timeline, one where Mobius and Hunter B-15 have no idea who he is. It’s a universe where a worse Kang is the head of the TVA.

We’re Getting a Season 2

The finale of Loki was full of big moments, such as Kang, that self-kiss, and Miss Minutes as a henchwoman, but, at a certain level, we all saw these moments coming. But did anyone see the end-credits screen? Loki is the first Disney+ series to officially get a season 2. BRB, dying of happiness.

What did you think about the Loki finale? Which moments were your favorites? Let Your Geek Sideshow and let us know your thoughts in the comments!