As the most prominently featured female elf in The Lord of the Rings, Arwen’s varied wardrobe stands out against a mostly male ensemble. Ranging from somber blues and blacks to hopeful purples and greens, Arwen’s variety in style is both beautiful to behold and reflective of her personal journey.

Her looks manage to be both consistent and fresh at once, allowing viewers to have a new gown to wonder at while still being in accordance with the character. Let’s take a look at the evolution of Arwen’s style throughout the film trilogy.

A Beacon of Hope 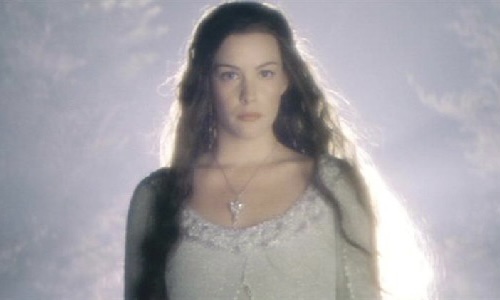 The first full view of Arwen is seen through the eyes of a wounded Frodo. Riding her white horse Asfaloth, a glow emits from the Evenstar around her neck, bathing her in white light. As she dismounts and moves closer to Frodo, her white shimmering gown comes into clear view.

She speaks to him in Elvish, telling him to come back to the light as the darkness of the Wraith world closes in on him. In her white gown, Arwen is the exact opposite of the dark cloaked Ringwraiths that had wounded Frodo with the Morgul blade. She represents goodness and hope in the wake of the hobbits and Strider having faced the darkness of Sauron’s most wicked servants. 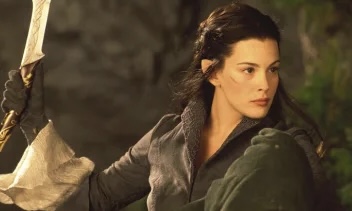 Her true appearance is revealed as she and Aragorn decide what to do next. Arwen is dressed practically for riding. Her hair is pulled back in braids off her face. She wears a gray suede dress that splits at the waist with plum pants underneath and tall gray boots. The outfit, however, does not sacrifice fashion for all its functionality.

The bell sleeves have a rippled, silver flowing fabric on the underside and soft silks peek out from beneath the skirt of the dress. The lace on the bodice is fastened by a silver butterfly-inspired brooch, and intricate Elvish designs adorn her upper arms. As an elf, she immediately strikes a graceful balance between capability and beauty. The purple tone of her pants and the butterfly motif are repeated in ensuing outfits, creating a sense of consistency for her style. 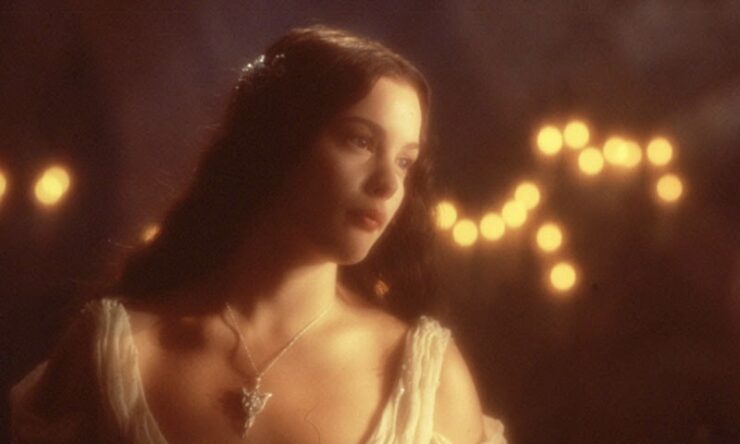 The next time Arwen appears on screen, she is back in Rivendell, having safely delivered Frodo to her father to be healed. She wears a sparkling white off-the-shoulder dress and her hair cascades down her shoulders in loose waves. Her ensemble includes the Evenstar up until the moment she gifts it to Aragorn as a symbol of her love for him. Her beauty and grace are undeniable, and it is no wonder, as her dress glimmers with every movement, why she is known as the Evenstar of her people. 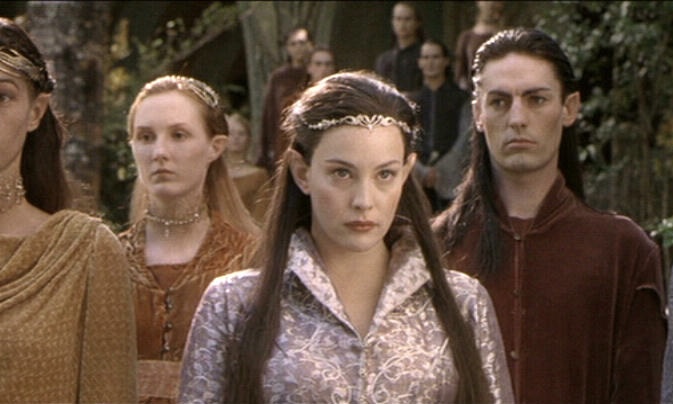 In the extended edition, Arwen appears as the Fellowship take their leave. She wears a structured, collared lilac gown featuring silver vine-like designs and a silver headdress. Noticeably absent is her Evenstar necklace, which she insisted that Aragorn keep despite his wish that she leave for the Undying Lands with her people. Among her fellow elves, all of whom wear more muted, warm colors, Arwen stands out in the soft purple hues associated with her character. 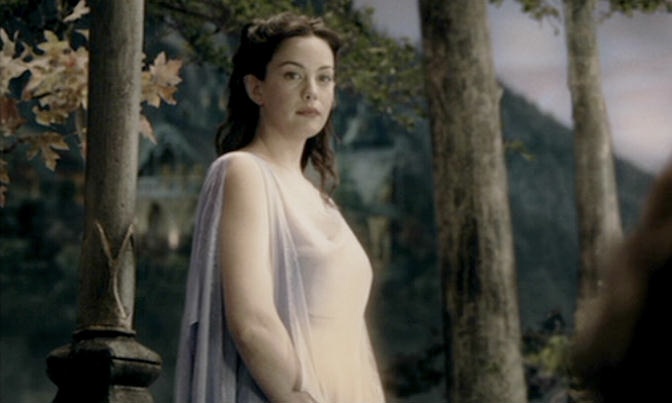 Arwen’s first appearance during The Two Towers takes place within Aragorn’s dreams. Arwen’s hair is pulled back on the sides, and she wears a simple sheer lavender gown. The colors of Arwen’s dresses often reflect her feelings and experiences in the current scene, and this one is no exception. The light purple tone of the dress and her form being just visible underneath the loose-fitting fabric fit the romantic mood perfectly. She offers a doubtful Aragorn encouragement, and reminds him to trust in their love for one another when he despairs before sharing a passionate kiss. 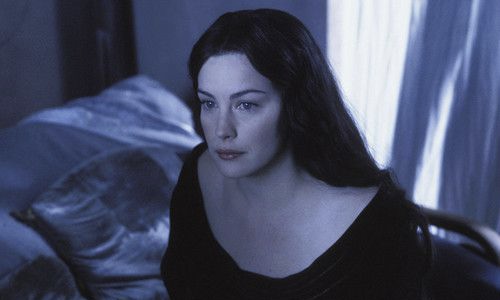 With the Fellowship long gone and the fate of Middle-earth hanging in the balance, Arwen is left to consider her options in Rivendell. In stark contrast with her previous dress, she wears an off-the-shoulder dark purple gown made of heavy fabrics, reflecting her somber mood as she considers her choice. As Elrond tells her of what lies ahead if she stays with Aragorn, Arwen is seen in her father’s vision of the future. 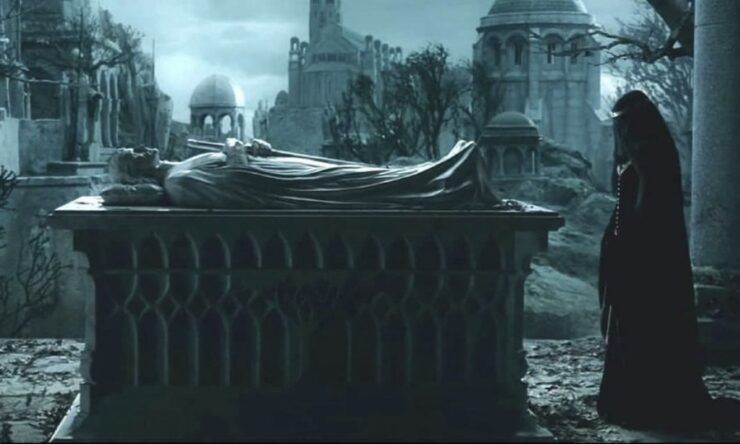 She wears a black mourning dress and veil as she stands at Aragorn’s funeral. With a tragic future laid before her, Arwen decides to leave Middle-earth for the Undying Lands. The last glimpse that viewers have of Arwen is wearing a cloak for traveling as she departs Rivendell under the cover of nightfall. 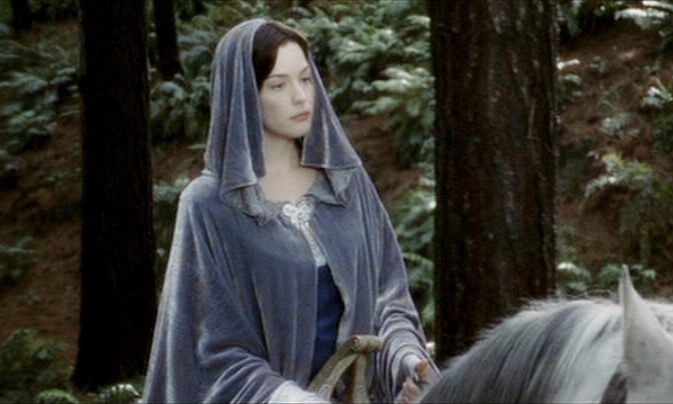 Arwen first appears in The Return of the King as viewers saw her last in The Two Towers. She wears her traveling cloak, which in the light of day, is revealed to be made from a velvety, soft grayish-purple fabric. The butterfly motif returns in the form of a delicate silver brooch fastening her cloak.

Her journey toward the Grey Havens is interrupted by her own vision of the future. Instead of a tragic ending, Arwen sees a future in which she and Aragorn have a son. With a new sense of hope, Arwen returns to Rivendell. 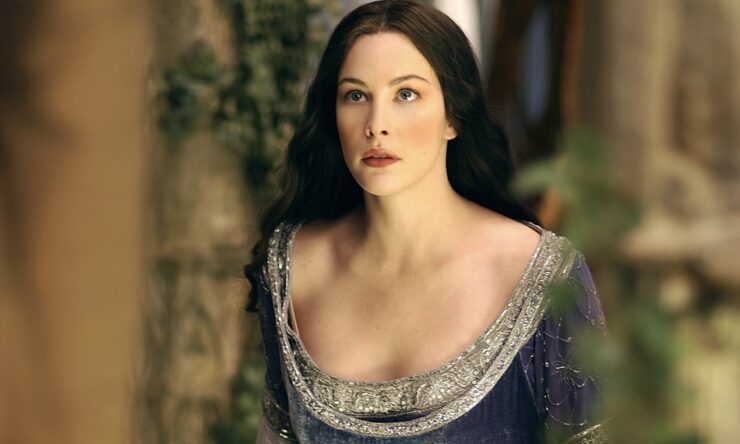 She casts aside her cloak as she confronts her father, revealing a detailed periwinkle dress with silver embellishments around the neckline and silver sleeves. It is the last time that viewers see Arwen in her Elvish purple as she accepts and eventually embraces the cost and reward of her decision to stay behind in Middle-earth.

The Price of Forever 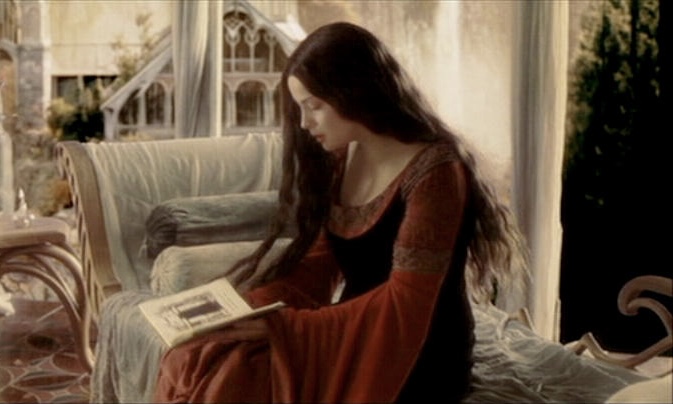 Following a brief appearance in a heavy black cloak as Andúril is forged, Arwen is next seen in a midnight blue velvet dress with deep red sleeves and a gold-detailed neckline. In this dress, she faces the consequences of her choice as her immortality begins to diminish. Aragorn goes on to have a nightmare featuring a dying Arwen in this dress.

The subdued tone of the main body of the gown is a far cry from the purples, grays, and whites she had chosen to wear previously. Other than her mourning gown from Elrond’s vision, it is the darkest outfit that Arwen wears. 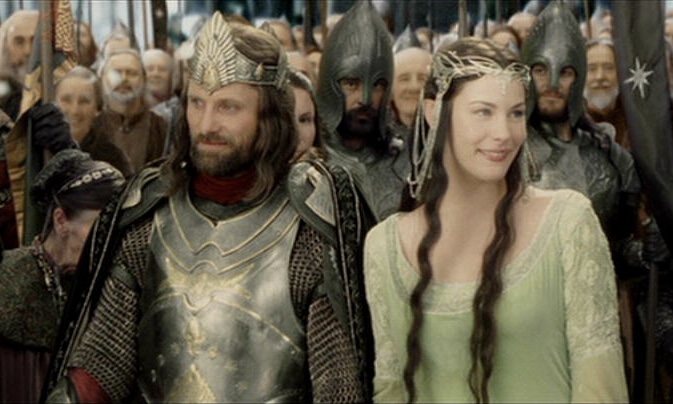 Arwen’s final appearance in The Return of the King takes place at the end of the movie during Aragorn’s coronation. As Aragorn walks through the crowd, his eyes fall on a light green banner featuring the Tree of Gondor, carried by Arwen.

Her head is adorned with a silver tiara featuring a butterfly motif and long silver beaded chains that fall around her pointed ears. Arwen wears a velvet dress in a bright shade of green with long bell sleeves and detailed beading around the neckline. Green, often associated with new beginnings and hope, is fitting as she joyfully embraces Aragorn and the life that she has chosen for herself.

Even two decades later, Arwen’s fashion continues to stand out as some of the most iconic looks from the trilogy. As one of the few female characters in the story, it is clear the costume designers relished in the opportunity to put Arwen in beautiful dresses that also tell her story.

From a horseback riding rescuer to the future Queen of Gondor, Arwen’s personal journey in The Lord of the Rings is beautifully reflected in everything she wears. Which Arwen outfit is your favorite? Let us know in the comments and don’t forget to Let Your Geek Sideshow!