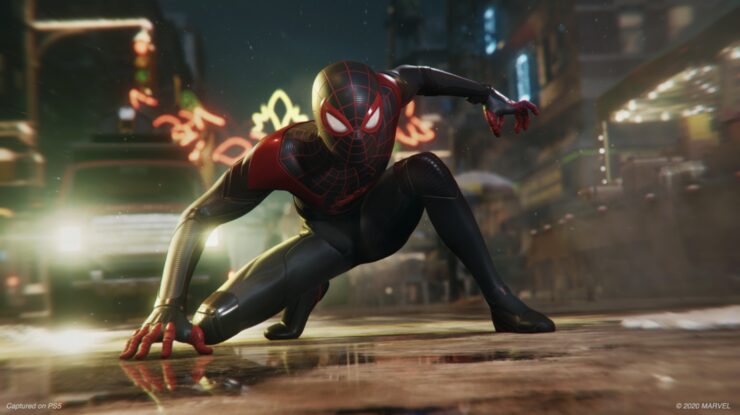 As a video game, Marvel’s Spider-Man: Miles Morales  is astounding — its story, visuals, soundtrack, and gameplay mechanics all make for a ridiculously fun experience for anyone. What makes the game unforgettable, however, isn’t how smooth Miles’ web-slinging through Harlem feels or how dynamic and satisfying the not-new-but-certainly-improved combat system is. It isn’t the fact that the narrative is engaging and tells a complete story despite being only eight hours long.

It’s the representation. It’s the culture.

The developers at Insomniac Games wanted to do right by Miles; they clearly love him. In striving to tell the best, most authentic story for the character, they truly created a celebration of culture and diversity that is worth far more than just a great gameplay experience. 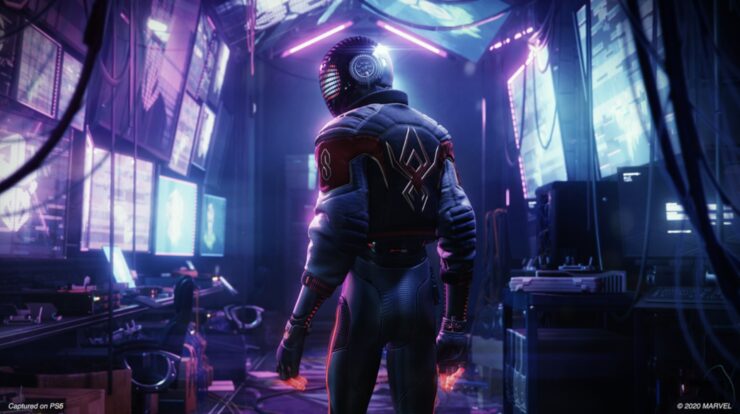 One of the ways any culture expresses itself is through music, and this game does a fantastic job of using the medium to tell who Miles Morales is. The orchestral score is still very much a Marvel’s Spider-Man score — there are motifs that come straight from the 2018 game that act as a signature, letting you know exactly what game you’re playing. But this score leans into Miles’s Black American heritage by adding hip hop beats into the orchestration, especially during battles and important character moments.

This also aligns beautifully with who Miles is as a person. Music is important to Miles — he has a mural of a DJ painted on his bedroom wall and his own bedside setup for making beats. He hears salsa music on the street one night during a rally, and his first thought is that he wants to put it over a hip hop beat. The score reflects this exact concept, as it combines hip hop with a very different genre of music yet does so in a way that complements both elements to make something unique. 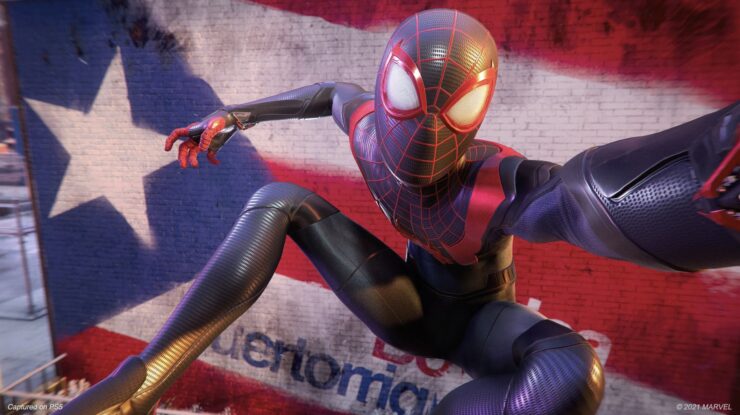 The in-game music, like the salsa that Miles hears at the rally, also celebrates Miles’ Black and Puerto Rican roots. We can hear rapper Lecrae coming from Miles’ headphones when the game starts. When Rio asks Miles to pick out a record from his dad’s collection to play during their Christmas dinner, the selection of albums includes Art Blakey, a jazz pioneer, Otis Redding, an icon of soul music, and Héctor Lavoe and Willie Colón, two influential artists who helped popularize salsa in America. Then Solomon Burke, a singer that helped shape what we call R&B today, plays over the scene of Miles eating a lovely meal with his mom and his two best friends. 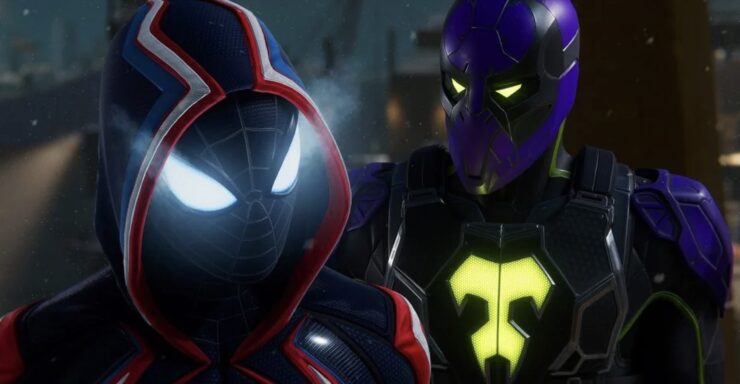 The music in these moments is tailored to represent Miles and his family, and the entire experience feels more authentic for the careful attention to detail shown by the developers. Even the story itself leans into Miles’ love of Black music. One of the game’s sidequests is a musical scavenger hunt initiated by his uncle. Aaron instructs Miles to look for old sound samples that he left all over Manhattan and identify what sounds of the city he and Jefferson, Miles’ dad, used to create them. Upon finishing the sidequest, Miles discovers Aaron’s hideout. Behind a frequency lock (the key to which is the song Miles just created), a new suit awaits.

The mission serves a story purpose, as collecting the samples and unlocking the suit also leads to Aaron revealing why he was forbidden from seeing Miles by his brother. But it’s also another way that the design of the game is purposefully crafted to represent and honor Miles. After all, these are not the sort of collectibles that would’ve made sense for Peter to look for, yet Miles’ culture and his love of music make them perfect for him. 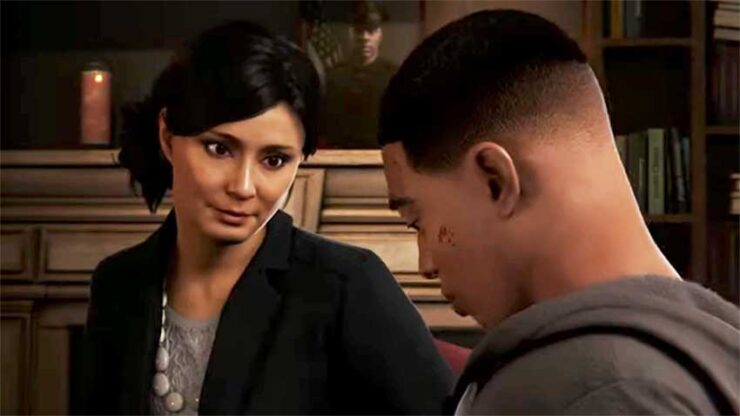 The use of language in Miles Morales is yet another way that the developers at Insomniac lean into Miles’ cultural heritage. His mom Rio is Puerto Rican. Her mother has moved back to Puerto Rico, which is how she and Miles find themselves living in her apartment in Harlem. Whenever we hear her, Rio is just as likely to be speaking in Spanish as in English, and Miles responds to her using both languages just as often. A mover on the street thanks Miles in Spanish when he stops to help lift a couch, and again, Miles naturally replies in Spanish because it’s familiar to him. As a bilingual kid, he’s clearly comfortable switching between the two languages with Rio and anyone else he meets.

Miles uses a lot of AAVE throughout the game as well. When he checks himself out in the bathroom mirror after changing into his Christmas dinner outfit, he tells himself he looks fresh as he brushes down the waves in his har. He meets up with his former best friend Phin and as they reminisce, he brags that their award-winning science fair project from middle school was fire. Whenever Miles talks to Aaron, he calls him “Unc.” Then he can just as quickly and easily have a conversation about voltage analysis and clean energy conversion. 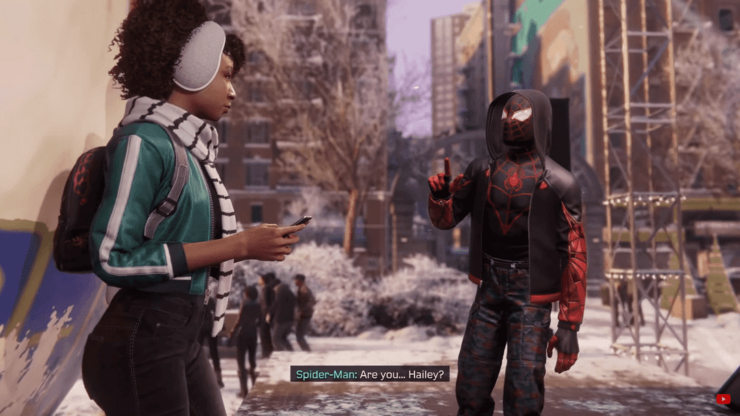 Miles is surrounded by different languages so he’s learned to speak them all, as anybody does who finds themselves immersed in more than one world. Miles even knows ASL! He meets a deaf street artist who ends up being a useful contact in one of the late game missions, and whether he’s Miles or Spider-Man, he always uses sign language to communicate with her.

Nothing ever feels ham-fisted or unnatural though; it never seems like inclusion for inclusion’s sake. The Insomniac team obviously went out of their way to learn as much as they could so that putting what they learned into practice worked seamlessly within the game. 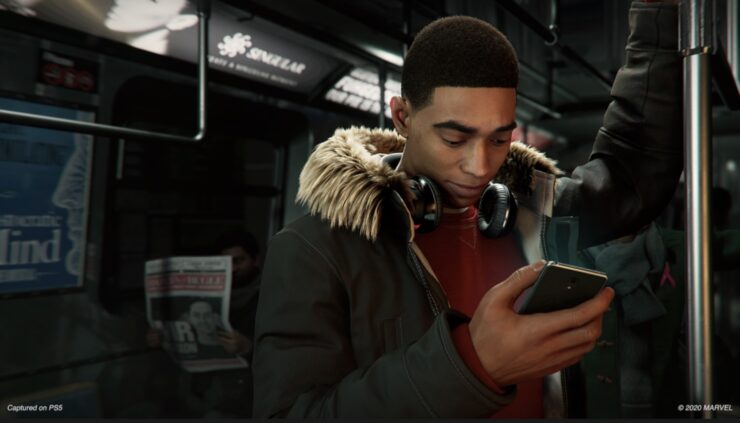 The care and attention put into Miles himself is a celebration of culture: the devs went to extraordinary lengths to make Miles look, dress, talk, and even move like a typical Afro-Latino kid would in the real world. The first time we see Miles, he has on a pair of Timbs, a puffy coat with fur lining the hood, and some Beats-like headphones hanging around his neck. He wears classic sneakers (Adidas, not Jordans, but that’s a whole different discussion), and his hair is freshly lined like he just stepped out of the barbershop. Insomniac even paid attention to the texture of his hair — the pattern of his curls is defined and often visible when he’s out of his mask.

He walks with a bit of swag in his step that, by the end of the game, he has fully embraced (especially when approaching Hailey, the cute street artist, but that’s beside the point). When he greets his neighbors, he reaches out to give dap. He’s real and authentic, thanks to the time and effort put in by Insomniac’s development team and, of course, Nadji Jeter who does his voice and motion capture. There isn’t a single element of Miles that gets overlooked in this game, and that consideration adds so much character and genuineness to the game.

The game’s tagline is “Be Yourself,” and it’s a theme that is written into the story. Miles Morales has to learn how to be his own version of Spider-Man. It’s when he stops trying to imitate Peter and starts to embrace himself that he flourishes. He designs his iconic black suit and finally becomes the Spider-Man that the residents of Harlem are proud to claim as theirs.

And like Peter does in their reunion at the end of the game, Insomniac celebrates Miles’ individuality by telling his story authentically. That celebration and respect is obvious in all the details from his hair down to his shoes, and it’s what makes this game something you feel and not just something you play.

Which part of Marvel’s Spider-Man: Miles Morales speaks to you the most? Let us know in the comments and don’t forget to Let Your Geek Sideshow!

QUIZ: Which Titan Power Would You Possess?