Marvel Studios’ Moon Knight is finally here, and episode 1 introduces us to Oscar Isaac’s portrayal of the mercenary with many faces. We also meet Ethan Hawke’s Arthur Harrow and are given glimpses of the ancient Egyptian pantheon of gods, including Khonshu himself.

Get ready to dive into the twists and turns of the mind-bending premiere of Marvel’s Moon Knight. Directed by Mohamed Diab and written by Jeremy Slater, the first episode is titled “The Goldfish Problem.” Steven Grant’s personalities might be split, but the reviews certainly aren’t — Moon Knight grips its viewers from beginning to end.

The show opens with an overhead shot of a desk as “Every Grain of Sand” by Bob Dylan plays in the background. Two forearms are displayed upward, revealing a tattoo of scales. On the desk, there is also a double-headed crocodile cane. The crocodile heads smash an overturned glass and then the shards are placed in a pair of sandals, before Arthur Harrow puts them on and exits his temple. His walk shows no sign of pain.

Suddenly, Steven wakes up in his bed, panic-stricken. His right ankle is tied to a column and sand encircles his bed. He releases himself from his restraints, checks the sand for footprints, and proceeds to remove tape from the windows. Despite these odd sleeping arrangements, the rest of Steven’s morning routine is mundane: call mom, feed his one-finned goldfish named Gus, and get ready for work.

Of course, true to his bumbling nature, Steven is late to work at the museum. On his way in, he notices a young museum visitor throwing some trash into a Great Pyramid of Giza display. Steven uses this opportunity to teach the child about the importance of the Egyptian underworld, especially mummification rites. According to Steven, everyone who entered the underworld was judged and only those whose hearts were deemed worthy could pass through the Field of Reeds.

Out of nowhere, Steven’s boss Donna appears to remind him that he is not, in fact, a tour guide. Steven returns to his post in the gift shop before a coworker approaches to confirm their dinner date for the following night. While interested, Steven is confused — when did he ask her out? Donna also expresses confusion since the woman mentions a steakhouse and Steven is actually a vegan. 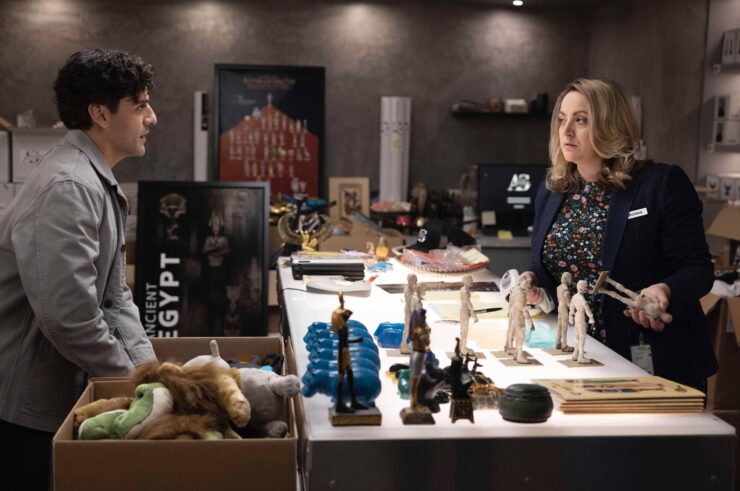 Later, in the stockroom, Steven attempts to point out a mistake on the museum’s banners. The Ennead, he explains, is composed of nine Egyptian gods, not seven like the banners imply. Donna, however, is only interested in reprimanding Steven for being late and she assigns him to inventory duty.

After work, Steven visits Crawley the Street Performer, with whom he shares the details of his day. While Steven wonders about his mysterious date that he doesn’t remember setting up, Crawley listens as he performs his mime act. Later, Steven gets ready for bed and sets up his security measures while listening to a program called “Staying Awake.” Rather than sleeping, we see Steven fiddling with a Rubik’s cube and researching the Ennead.

In a jarring transition, Steven is suddenly face down in grass with a severely dislocated jaw. As Steven struggles to get his bearings in this mountainside setting, a disembodied voice tells him to “surrender the body to Marc” just as Steven unearths a golden scarab from his pocket. “Oh, the idiot’s in control,” the voice continues before a tall bandaged form briefly appears behind Steven.

After castle guards open fire on him, Steven escapes into the nearby village. The villagers are converging upon Arthur Harrow, who leads them in a judgement ritual of the goddess Ammit. The scales tattoo on Harrow’s arm tells him whether the person being judged is worthy or not. When a woman is deemed unworthy, he clasps her hands and seems to take her life force in Ammit’s name. She crumples in a lifeless heap.

One of the guards from earlier approaches Harrow to tell him the exchange was interrupted and two of his men were killed. Harrow yells out a command in ancient Egyptian, and all the villagers kneel except Steven. It would seem that Harrow recognizes Steven, referring to him as “mercenary,” before demanding he hand over the scarab. As much as Steven tries to give up the golden beetle, the unseen voice takes control of his body and Steven refuses to give up the item.

Just as the villagers are about to pry the scarab from his hands, Steven blacks out. He wakes back up to realize he still has the scarab but the villagers around him are all dead and his hands are covered in blood. Panicked and confused, he attempts to escape in a cupcake van. As Wham!’s “Wake Me Up Before You Go Go” plays, the cupcake van is pursued by Harrow’s men. Twice more, when it seems Steven won’t be able to escape, he blacks out only to wake up and realize he has killed his pursuers. The voice continues to berate Steven and demand that Marc returns. As the car chase comes to a disastrous end, Steven wakes up in his bed screaming.

Khonshu, Forget About Me

Though he’s a bit shaken, Steven is relieved that his visit to the Alps was all just a dream. He says good morning to Gus but realizes that somehow Gus has two fins, not one. After a confusing conversation at the pet shop, Steven rushes to make his dinner date only to realize he has missed it by two days. Back at his apartment, Steven stumbles upon a secret compartment in the wall. Inside, he finds a key and a flip phone, whose call log is filled with missed calls from Layla and one from Duchamp.

Suddenly, another call comes in from Layla. Steven answers and she refers to him as Marc, questioning his accent and what he’s doing before hanging up. The lights begin to flicker and the entire building quakes as a new voice says to Steven, “stop looking.” He dashes out of his apartment into the elevator, with shadowy visions of Khonshu haunting him until he blacks out again — only to wake up on the bus to work, followed by both Khonshu and Harrow.

Inside the museum, Harrow confronts Steven. He has returned to get the scarab, which belongs to Ammit, an Egyptian deity who delivers justice through judgement. Harrow explains to Steven that Ammit could have prevented the many tragedies of human history if she had not been betrayed by her fellow gods and her own Avatar. He is a strict follower of Ammit, asking Steven, “Would you wait to weed a garden til after the roses were dead?”

Harrow lures Steven in by sympathizing with the voice in his head. He knows how difficult it is to live in that confusion. Taking hold of Steven’s hands, Harrow attempts to pass Ammit’s judgement upon him. The scales tattoo is unable to get a reading on Steven and he manages to escape after Harrow realizes the chaos within him won’t be judged so easily.

Wake Me Up When Marc Spector Ends

That night, after Steven finishes inventory, he prepares to leave work. Just as the museum lights begin to shut down, he hears the cries of some sort of animal. Against his better judgement he investigates, only to be pursued by a jackal-like beast sent by Harrow. Cornered in the bathroom by the relentless beast, Steven’s reflection shifts into Marc, who asks him to give up control and let him handle the situation.

After frantic hesitation, Steven finally surrenders control to Marc. The door breaks down and the beast pounces, claws scratching just as the familiar wrappings begin to writhe around Steven/Marc’s body. The beast is then shown attempting to escape the bathroom but is dragged back in, and Moon Knight makes his first official appearance pummeling the creature into the ground.

Moon Knight stands and faces the camera just as we get a full body shot and closeup of his face before everything fades to black.

In this first episode of Moon Knight, Steven Grant’s ordinary world quickly unravels into a twisted waking nightmare. Will he regain control or is Marc in the driver’s seat now? Why was Ammit betrayed? And who are Layla and Duchamp? Only the next phases of Moon Knight will tell.

For even more official details from Marvel, check out their behind the scenes info here about everything Moon Knight. What was your favorite moment from episode 1? Let us know in the comments and don’t forget to Let Your Geek Sideshow!

What To Watch Next If You Enjoyed Our Flag Means Death