Gotham is a city perpetually cast in night. Even while the sun is up, the shadows creep behind its citizens and threaten the city’s peace. Gotham City is a place where evil flourishes below the watchful wings of the Bat.

The DC Comics villains listed here aren’t groundbreaking highlights of the infamous Rogues Gallery. In fact, they’re some of the most well-known repeat visitors of Arkham Asylum. Batman has faced them countless times over the years. But have you ever considered what it is that makes these villains so enduring?

In other words, why are these the most terrifying villains of Gotham? If you dare, descend into the monstrous psyches of Batman’s worst enemies and understand the very nature of fear itself. 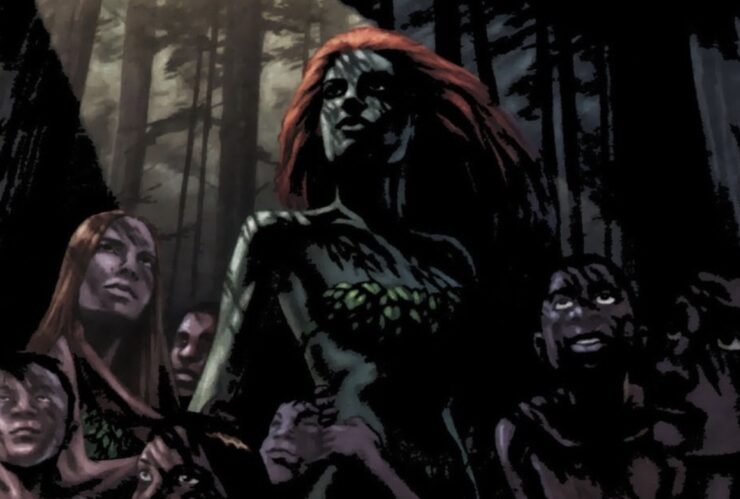 Poison Ivy, formerly known as Dr. Pamela Isley, is a force of nature — and that’s not a euphemism. She has been chosen by the Green to be its earthly Avatar and over the years she has shed her gimmicky foliage of the 1960s to become a fearsome fixture of Gotham City.

She is unpredictable from one moment to the next, capable of maternal kindness for plants and the occasional orphan followed by murder without a second thought. Ivy is truly a symbol of the ambivalence of nature toward humans. There’s no doubt Ivy is an extremist in her views. Her levels of misanthropy are unprecedented and, if she had it her way, the plants of the world would far outnumber vile, disappointing humans.

Because she is an extension of nature itself, Ivy has proven herself capable of regeneration, reincarnation, and revolution. Ivy endures because nature will never value humans beyond their momentary usefulness. Thus she will always exist in the shadows, taking root and ready to bloom. Nature obeys no man. 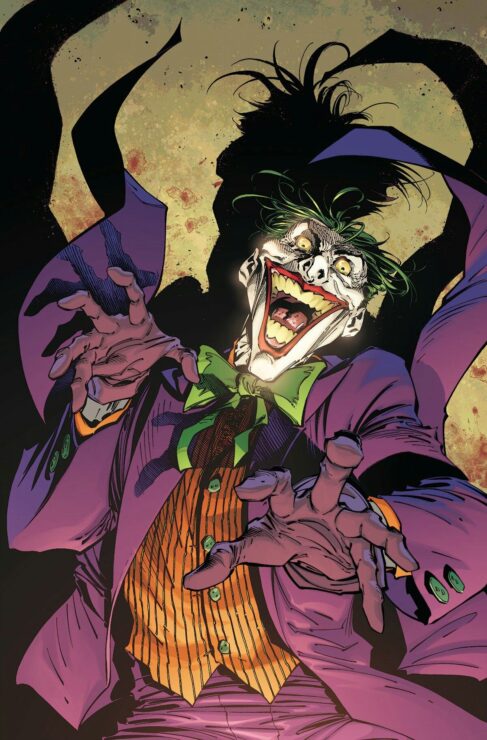 Of course The Joker is included here in this list of fearsome Gotham villains. And sure, his laugh is funny. Sometimes his antics are even worth a chuckle in their ridiculousness. But make no mistake, The Joker is chaos personified. He might wear a preposterous aubergine suit but he follows no code, has no morals, and marches to the beat of his own murders.

Without The Joker, it’s been argued that Batman would be lost. Every hero needs their archenemy, the one who drives that hero to continue fighting no matter what. The Joker, however, is truly a trying opponent. His madness might appear to be comedic yet beneath that grin there is nothing but murderous intent. His major storylines have often involved the brutal deaths of those closest to Batman because his cruelty knows no boundaries. And when our boundaries are relentlessly crossed, it’s only a matter of time before we break too.

Speaking of breaking, there’s Bane. This man is the product of a childhood filled with violence and the devastating effects of addiction. His dependency on Venom shows the lengths people will go to hide their inadequacies. Any addiction reduces a person to a shadow of who they truly could be. However, there’s more to Bane than mountains of rippling, grotesque muscle and rivers of bulging veins.

Bane is perhaps most famous for his campaign of mental (then physical) terror against Batman. He released numerous prime offenders from Arkham Asylum all at once and bided his time, waiting for this onslaught of crime and degeneracy to take its toll on Batman. After months of this torture, Bane at last confronted Batman and snapped his spine.

For this reason, Bane symbolizes our fear of failure. We all fear failure in some way, and when one of our most beloved heroes falls at the hands of an enemy, we immediately question our foundation of right and wrong. Is it possible, after all, that evil can triumph? Bane is the reality that failure is never too far behind us. 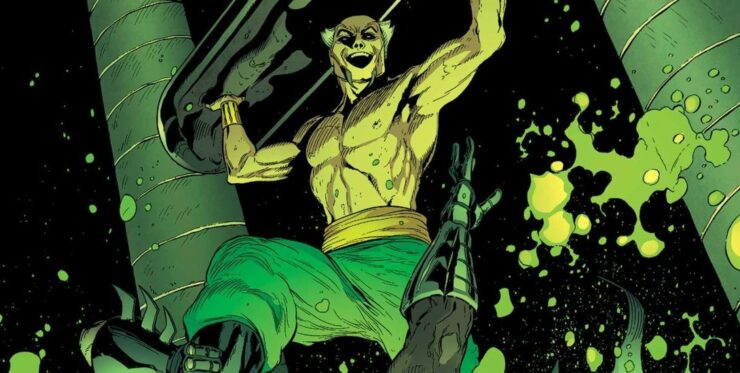 Just as humans avoid failure at all costs, they also struggle with the concept of death. Though many cultures take different approaches to it, some celebratory and others sanctimonious, death is one of the few certainties we have in life. And its certainty is that we will all cease to exist, to leave our loved ones and proceed into an unknown next step. Enter Ra’s al Ghul, the Demon’s Head.

Ra’s al Ghul represents humanity’s struggle with mortality. Not only do we seek to understand death, but throughout our existence we have sought to control it — the Fountain of Youth, the Philosopher’s Stone, you name it. Anything to prolong the ending we all must face. Ra’s, however, discovers a way around death through his Lazarus Pits. For this reason, he represents humanity’s hubris in thinking we could be immune to death. Even in his destiny-defying power, there are roots of fear. And we all know what happens to those who fly too close to the sun … or plunge too far into the pit. 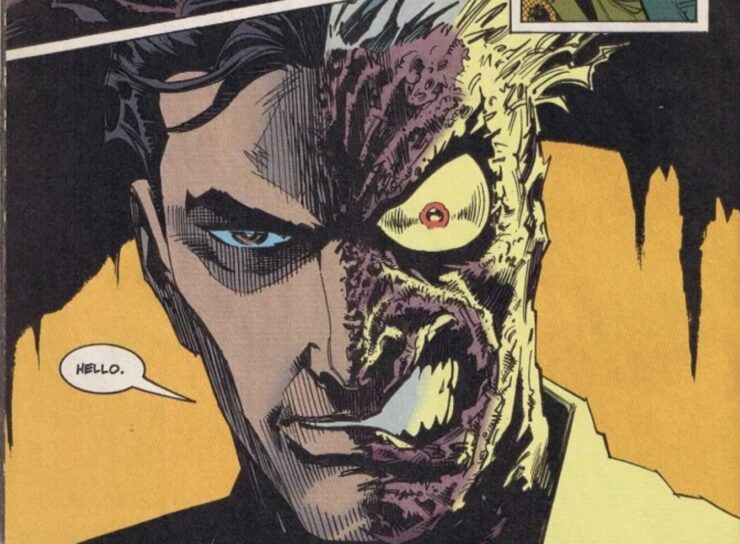 Once a man of honor and respect, Two-Face is now the cold, calculating visage of chance. He is both the control and the destruction found in law and order. His signature coin toss is the blind effect of fate, and his rigged game shows the way in which fate is never fair.

A lawyer upholds the merits of society but Two-Face is a corruption of that. His terror is always meticulous and it abides a strict code, but it’s his code. A game of chance is only fun when you know you’ll win, and Two-Face always knows how to win a bet.

Whatever virtues were present in Harvey Dent no longer exist because now Two-Face is the embodiment of every human’s eternal struggle: Two sides of the same coin, each fighting for the upper hand. Anyone who has experienced trauma in their life knows that it breaks you — there will always be a before and an after version of you. And in that duality, there is deep despair. 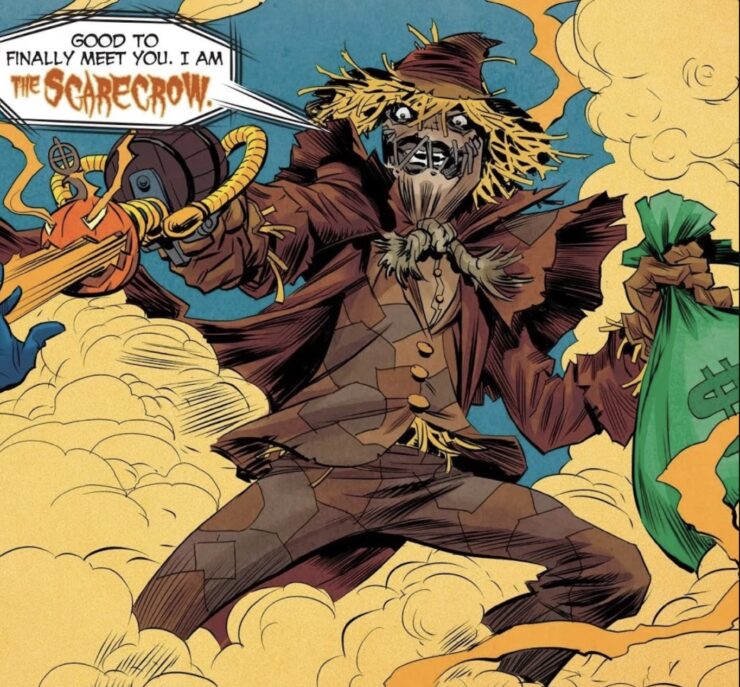 Scarecrow is the antithesis of Batman’s fear-conquering persona. While Batman uses his fear as an inspiration to save himself and others, Dr. Jonathan Crane does the opposite. Crane employs fear as a weapon. He manipulates the most secret nightmares of anyone he crosses to bring them to their knees in crippling paranoia. Scarecrow has always been a quiet staple of Batman lore because his very essence is so closely tied to Batman.

Throughout many of the most iconic Batman storylines, Scarecrow has been working behind the scenes, providing other villains (and sometimes heroes) with vital insight into the minds of criminals. He heightens the danger of any plot he’s brought into, and his unsettling intuition is surpassed only by the potency of his fear toxin. Scarecrow represents the depravity of giving in to fear. He is the result of fear granted free rein.

The next time you follow the escapades of one of these villains, keep in mind what you now know. They might wear bright colors or have silly rhyming dialogue, but beneath that outer facade is a broken interior — and anything broken is bound to have sharp edges.

Which Batman villain are you? Share your thoughts with other Batman fans at side.show/geekgroup, and don’t forget to Let Your Geek Sideshow!

The Lord of the Rings: Book to Movie Changes