Ms. Marvel is finally here! The premiere episode, “Generation Why,” ushers in a new era for the Marvel Cinematic Universe as Kamala Khan takes center stage. It’s definitely a palette cleanser after the dark and trauma-filled Moon Knight — a lighthearted balm for the soul.

Ms. Marvel taps into the titular character’s knack for daydreaming, utilizing delightful animation and vividly colorful visuals to drive the narrative forward. Said visuals are depicted in the style of the super hero fanart Kamala sketches, and it’s such an engaging way to tell the story.

If you’re anxious to break down the first episode of Ms. Marvel, you’re in the right place! Read on for our recap of “Generation Why” from beginning to mid-credits scene. 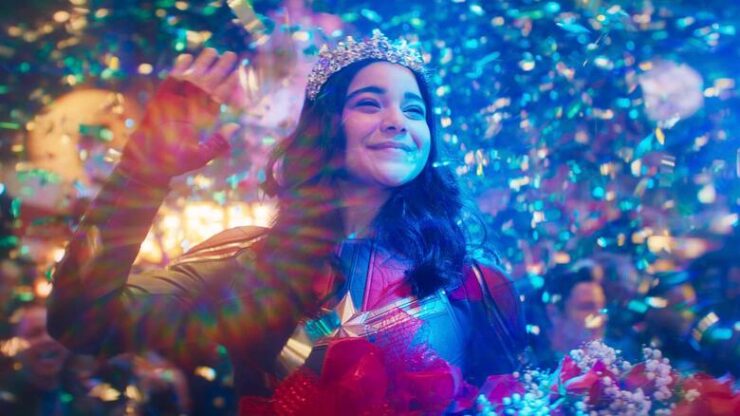 We open the episode with Kamala recording a video presentation of the Battle of New York, complete with hand-drawn cut-outs of America’s fave super hero team. She provides animated narration, even namedropping Scott Lang, AKA Ant-Man’s podcast (time to scour Spotify for that). After uploading it to YouTube, Kamala prepares for her driver’s test. Her mother (ammi in Urdu) Muneeba urges her to “look at the mirrors every 15 seconds at least.”

Conversely, Kamala’s father (abbu in Urdu), Yusuf, offers drastically different advice. He says to never completely stop at stop signs because life is too short — never mind that failing to abide by the law can make it significantly shorter. Unfortunately, Kamala promptly fails her test by backing into her instructor’s car. So, there’s that.

Later, Kamala unites her with best friend Bruno, who’s already caught wind of her driver’s test failure. Her other BFF, Nakia, also joins them in the hallway, where they chat about the upcoming AvengerCon and how they’ll get there since Kamala can’t drive them.

Then, Mr. Wilson, the school guidance counselor, calls Kamala into his office. He addresses Kamala’s penchant for daydreaming and doodling fanart. She perpetually lives in Fantasy Land even though, as a junior, it’s time to start preparing for the future. The visuals in this scene are playful and lively and set the perfect tone for this series.

How Does One Travel to AvengerCon? 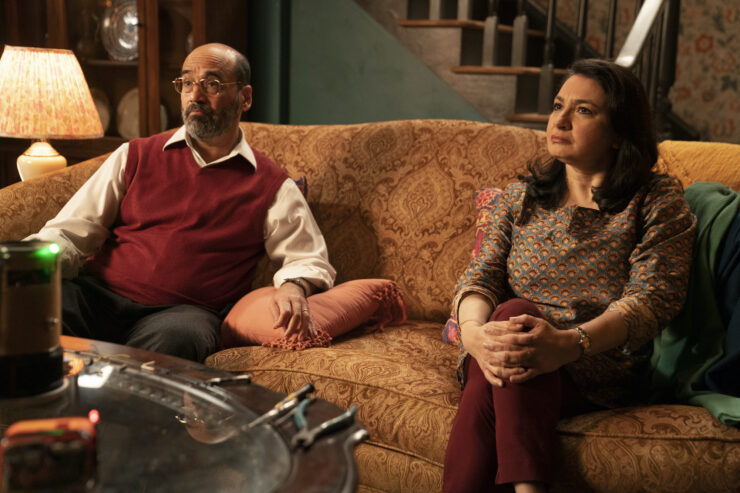 After her conversation (or gentle scolding, however you look at it) with Mr. Wilson, Kamala reunites with Bruno at the store his family owns. He’s airbrushing Kamala’s Captain Marvel costume for the costume contest at AvengerCon. Bruno suggests Kamala ask Muneeba for a ride to the event despite Kamala’s protests. While riding their bikes, Bruno and Kamala brainstorm fun flourishes they could add to the latter’s Captain Marvel contest. Again, the vividly colorful visuals in the background add tons to this show’s aesthetic.

Kamala rummages through her grandmother’s “junk” at home, finding a gorgeous bracelet. She seems keen on taking it for herself when Muneeba quickly yanks it from her hands, reasserting that it’s “junk.” Muneeba appears to know more than she lets on.

Kamala then joins Muneeba on a shopping excursion as they stock up on wedding supplies for her brother Aamir’s special day. Kamala would rather be anywhere but shopping.

Later, Kamala broaches the subject of AvengerCon to her parents. Muneeba emphatically forbids her from attending. Walking around the city at night and wearing revealing cosplay? No, thank you!

Aamir vows to persuade Muneeba on behalf of Kamala, and the following day, it seems he has made progress. While Kamala poses in her Captain Marvel cosplay in front of the mirror, Muneeba drops a surprise on her daughter’s lap. She can attend AvengerCon as long as Yusuf drives her and Bruno there and supervises them. Kamala is ready to celebrate until her mother brings out a homemade costume for her to wear.

Suddenly, Yusuf bursts through Kamala’s bedroom door while donning a “Big Hulk” costume. Muneeba states that Kamala can be “Little Hulk.” Who doesn’t love matching father-daughter cosplay? Kamala certainly doesn’t. She still has her Captain Marvel outfit on, albeit concealed under a robe, and believes her dad will embarrass them. In typical teenager fashion, she expresses her disgust at the plan. Muneeba and Yusuf, both disappointed, order her to stay home then. 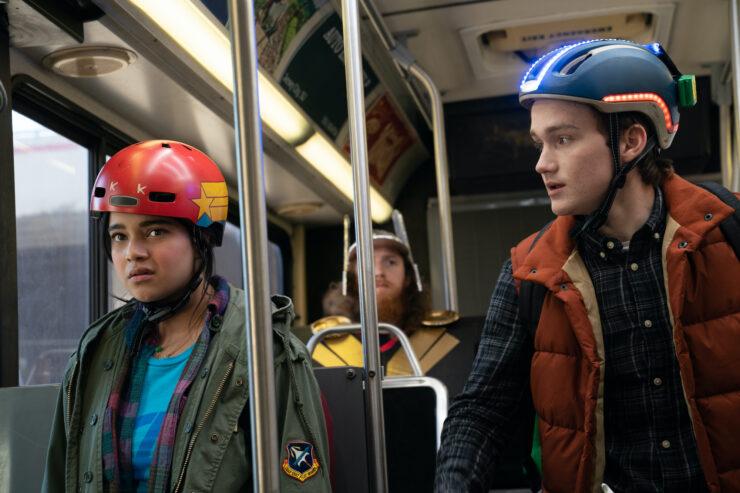 That night, she breaks the bad news to Bruno. He whips out some photon gloves he designed to surprise his bestie. Well, it seems he might want to be more than friends. Only time will tell.

How does one travel to AvengerCon? Kamala hatches a game plan with Bruno at school, and we see her brilliant scheme play out onscreen, complete with her signature delightful doodles. Her plan involves some parkour, linking a security camera system to their phones, and riding the bus. What could go wrong?

Kamala sneaks into the attic and procures her grandmother’s bracelet, intent on implementing it into her cosplay.

Where the Geeks Run Free 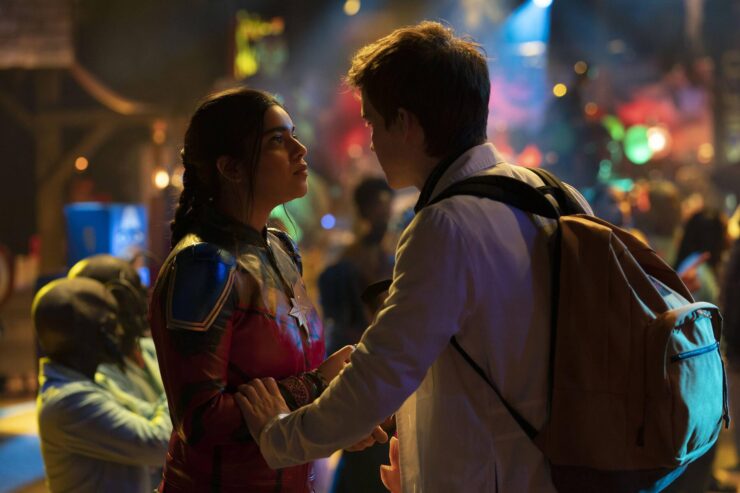 Kamala and Bruno finally make it to AvengerCon, after a few minor hiccups while en route. Our girl had to break the rules, but you can’t make an omelette without breaking a few eggs.

AvengerCon is a smorgasbord of Marvel Easter eggs! We see merch for Thor, Captain America, Iron Man, Black Widow, Hawkeye, Hulk — even the Guardians of the Galaxy like Groot (although he’s called “Mr. Tree” here) and Drax. There’s a lovely tribute wall to Tony Stark and Natasha Romanoff, and the wound of Avengers: Endgame reopens all over again.

In short, Kamala’s in heaven, in a place where the geeks run free.

Meanwhile, Kamala spots Zoe, the high school’s resident mean girl, sporting a Captain Marvel costume herself. Uh oh. It’s not entirely accurate, but it’s certainly a contender. Kamala changes into her suit and helmet but inadvertently leaves the photon gloves Bruno made in the bathroom. She dons her grandmother’s bracelet for that personal flourish.

Suddenly, we see a bluish light envelop Kamala, seemingly emitting from the bracelet. Her eyes glow with the same light. She appears to slip briefly into another universe before resurfacing in the present.

Kamala takes the stage for the contest. She shields her face to guard her eyes against the flashes of several cameras. In her nervousness, Kamala activates the bracelet, and we see her project shapes that shoot out of her hands. She accidentally knocks off the head of a giant Ant-Man statue, causing chaos on the con floor.

When a gigantic Mjolnir almost crushes Zoe, Kamala conjures a massive, stretchy hand, knocking her out of the way — so the show sort of pays homage to Kamala’s elastic abilities from the comics, but with a twist. Bruno ushers Kamala out of the con amid the melee and the pair zip home on Bruno’s bike. 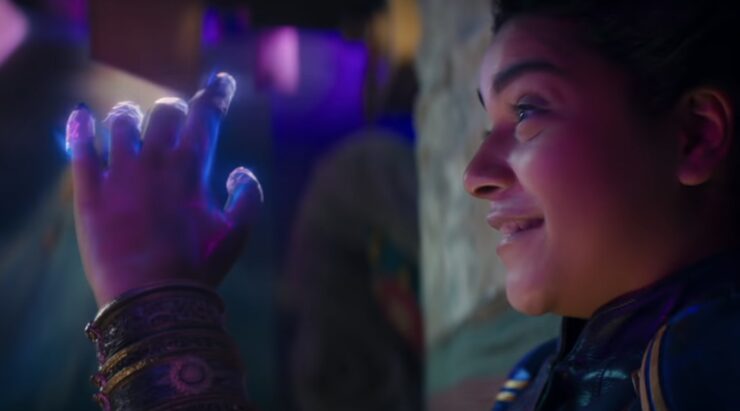 Kamala climbs through the window into her room to find Muneeba sitting near her bed. Uh oh. Ammi’s got her disciplining face on. Muneeba chastises Kamala for being rebellious and betraying her. She urges her daughter to think about the future. Does Kamala want to be good or perpetually live with her “cosmic” head in the clouds?

After Muneeba departs, Kamala lays on her bed, observing as energy dances around her hand courtesy of her bracelet. She wants to be cosmic.

It’s extra credits scene time! After the initial cast and team behind the episode are credited, we’re taken to the messy desk of an office. Agent Deever and Agent Cleary (last seen interrogating Peter Parker & friends in Spider-Man: No Way Home) are watching footage from Kamala’s power showcase at AvengerCon.

Deever notes she’s never seen powers like Kamala’s before. They decide to bring her in for, presumably, questioning.

What a fun debut! Ms. Marvel does take liberties with Kamala Khan’s origins and powers. However, the changes are necessary if Marvel doesn’t plan to canonize Terrigen Mist or anything Inhumans-related (beyond Black Bolt’s appearance in Doctor Strange in the Multiverse of Madness).

Iman Vellani oozes charm and affability, and the supporting cast delivers the goods too. The show’s representation of Pakistani culture is exhibited with grace and love. Marvel shining light on a Pakistani-Muslim super hero is a thing of beauty.

What was your favorite moment from “Generation Why?” Join the conversation alongside other Ms. Marvel fans in the Let Your Spoiler Sideshow Facebook Group, and don’t forget to Let Your Geek Sideshow!