Last week’s premiere of Ms. Marvel brought Kamala Khan into the MCU fold. After spending her formative years yearning to be a super hero like her idol Captain Marvel, Kamala unlocks her own set of latent powers via a bangle from her great-grandmother, Aisha.

Unfortunately, this occurred while standing on a stage for a costume contest at AvengerCon. Zoe, the popular girl, films footage of Kamala’s heroics at the con, which makes its way into the hands of Agent Cleary and Agent Deever, who work for the Department of Damage Control (DODC). Now, Kamala and Bruno explore the former’s newfound abilities while Kamala also navigates the euphoric rollercoaster accompanying a new crush.

“Crushed” methodically lays the groundwork for what’s sure to be an exciting series. Ms. Marvel does something that most Marvel live-action shows don’t: It focuses on the protagonist’s family life. Here, we see a stable, loving family that sticks it out through life’s ups and downs. It helps us get to know Kamala better and root for her.

Although let’s be honest, we all fell in love with Kamala at first sight. 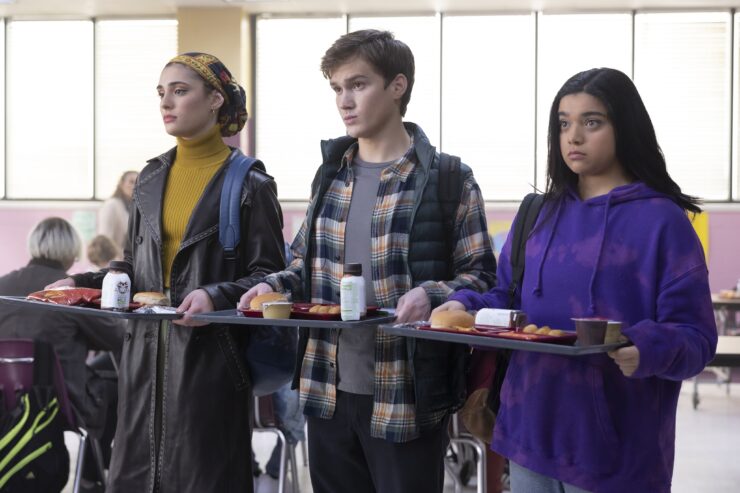 Kamala saunters down the school hallway with a newfound sense of confidence. She’s cosmic, baby! She cracks a joke to Bruno about sharing similarities with Scott Lang “because we’re both charming and we look a lot younger than we are.” Marvel referencing Paul Rudd’s inexplicable eternal youth is a collective balm for our souls. Plus, this marks the second nod to Ant-Man in two episodes.

Then, Kamala, Bruno, and Nakia wander into the cafeteria to find Zoe regaling a crowd with the story of her life-altering encounter with “Night Light,” AKA Kamala. So, to celebrate this heroic occasion and “the fragility of life,” Zoe’s throwing a party.

Later, Bruno observes Kamala’s extraordinary powers up close when the pair sneak off for an experiment. What transpires next is a training montage that puts Rocky to shame (well, depending on your level of obsession with Sly Stallone).

Living on a Prayer 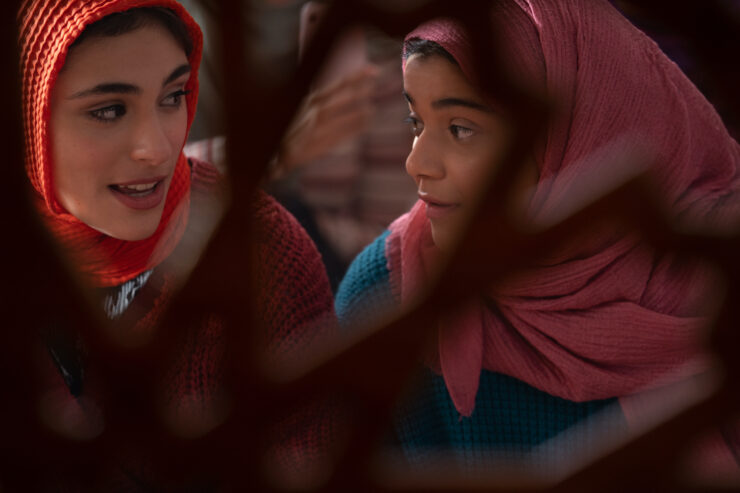 Next, Kamala and Nakia rush into their mosque for prayer. We see the men and women praying separately in the same room, with a partition between them — which Kamala calls out. Afterward, Nakia notices someone stole her shoes, and one girl chimes in with, “The mosque thief has struck again.”

While outside, Kamala encourages Nakia to run for the Mosque Board. Perhaps a woman can enact genuine change!

Back at home, Kamala approaches Muneeba about attending Zoe’s party with Bruno and Nakia. Surprisingly, Muneeba yields, albeit with some hesitancy. Our trio arrives at Zoe’s big shindig, wherein one student gives Kamala a screwdriver despite claiming it’s just “orange juice.”

Suddenly, a scene seemingly paying homage to Fast Times at Ridgemont High plays out. We see Kamran emerge shirtless from a pool, completely arresting Kamala’s attention. He waltzes up to her and introduces himself. When someone alerts the crowd of police sniffing around the premises, Kamran offers to drive our crew home.

Kamala and Kamran bond over Bollywood films and Swet Shop Boys (Riz Ahmed’s band!) in the front seat. Meanwhile Bruno turns green with envy in the backseat, frequently chiming in to supervise the conversation. If you didn’t think Bruno carried a torch for Kamala in the first episode, this outing will surely convince you.

Before heading home, Kamran gives Kamala his number, offering to become her driving instructor. Kamala bursts into her house in a full-on musical moment, complete with choreography, and it’s utterly delightful.

The following day, Kamala flees to the bathroom after her nose emits the same glow from her powers. She tries futilely to snuff it out, but the glow transfers to her hands. Nakia slips her a tampon over the stall door, under the impression Kamala’s having her period.

Nakia encourages Kamala to disclose her feelings, i.e., why she’s acting so strangely. Kamala forgoes sharing her newfound abilities with her best friend. Nakia talks about feeling as though she perpetually exists in a limbo state because of her skin color, but when she puts on her hijab, she feels like herself. She realizes she doesn’t need to prove anything to anyone. It’s such a beautiful moment to hear Nakia talk about an experience so many others share.

Meanwhile, Mr. Wilson informs Bruno that he was accepted into the Early Immersion program at Caltech. Woohoo! But wait … how will Bruno break this news to Kamala?

Then, Kamala has her first driving lesson with Kamran. After taking the car for a spin, they make a pitstop at a restaurant. Kamala spots her brother Aamir and his fiancée Tyesha outside, so she hides behind a menu. Kamran hides with her, and it’s sickeningly sweet.

Not-so-side note: Kamala and Kamran reference Kingo’s Bollywood career in this scene, and it’s such a fun way to throw Eternals (which deserves more love) into the mix.

Family Dinner with a Side of History

Later, Kamala has dinner with Muneeba, Yusuf, Aamir, and Tyesha. They discuss the Partition in India, the division that resulted in two independent countries: India and Pakistan (Karachi, where Yusuf is from, was designated the first capital of Pakistan in 1947). Muneeba’s family moved to Pakistan after the Partition.

After Muneeba urges the group to steer the conversation away from the Partition, Yusuf tells Tyesha a story. Aamir and Kamala listen in as well as he tells how Muneeba’s mother, Sana, got separated from her family during the Partition before the last train left the station. Nobody knows how Sana, a toddler, made it back by herself. Sana claims she “followed a trail of stars” back to her father.

Unfortunately, nobody knows what happened to Sana’s mother, as she vanished like many others that night. Kamala then looks under the table and notices her bangle glowing. The room shakes, the lights flicker, and she sees a bright light looming, as the outline of a woman appears with her hand outstretched.

Kamala wakes on the floor with her family hovering above her. Her bangle is trying to pull back the curtain on her past. Later that evening, Kamala video calls Sana to ask about her mother. Kamala learns that the bangle belonged to Aisha, Sana’s mom. Kamala probes further, but Sana refuses to engage, citing that Muneeba will be angry. Kamala hears her father lurking outside her door and uses her powers to shut it when Yusuf tries to open it.

Later, the Khan family celebrates Eid Mubarak with Bruno and Nakia. Nakia seizes the opportunity to campaign for the Mosque Board, enlisting Kamala and Bruno’s aid.

Meanwhile, Agent Cleary and Agent Deever bring Zoe into the DODC for questioning regarding her video from AvengerCon. They ask her to reveal the person who saved her and, under intense scrutiny from Deever, Zoe relents that said person might be South Asian. Deever and Cleary order their teams to search every temple, community center, and mosque for Kamala.

Next, Kamala elicits more info about Aisha from the “Illumin-Aunties.” (Could this be a reference to the Illuminati?) They claim that Kamala’s great-grandmother was bad news. She cursed everything she touched and brought shame to Muneeba’s family. Aisha even killed someone! Well, according to an auntie, at least.

Suddenly, a boy taking a selfie while leaning out of the mosque window slips and almost falls to his death. A crowd gathers as the kid dangles high above the ground. Kamala dons her Captain Marvel costume and swoops to his rescue. Someone in the group refers to her as “Night Light,” so the name is, unfortunately, still taking the internet by storm. Kamala encourages the child to think about ice cream on pizza, his favorite food (you do you, kid).

Kamala creates steps out of solid energy for the kid to hop on, but he loses his balance and falls. Thankfully, Kamala uses her powers to soften his fall, so he only breaks an ankle instead of, you know, his entire body. (On another note, this is the mosque thief — you can see Nakia’s shoes on his feet.)

Kamala flees to a nearby alley; however, Deever catches her. She utilizes her abilities to create glowing steps, seamlessly running above Deever and her team’s heads. She even destroys a few drones. Kamala slips, falling behind a vehicle. Then, Kamran pulls up in his car and helps Kamala escape the police.

Kamran seems unfazed when Kamala removes her helmet. A woman in the backseat of his vehicle addresses Kamala, claiming she’s been waiting a long time to meet her. Kamran introduces his mom and it appears to be the same woman from her visions. Could she know something about Aisha?

What Are the Next Steps for Kamala?

“Crushed” is delightful, infused with the whimsical elements from the first episode that give us a glimpse into Kamala’s imaginative mind. The movie homages, vividly colorful visuals, and Kamala’s musical moment make this series stand out from the rest. In addition, Ms. Marvel‘s depiction of the Muslim faith and a Pakistani family is showcased with love and respect.

So, what lies ahead? Why isn’t Kamran bewildered by Kamala being the enigmatic Night Light? Just who is the woman in the backseat? Are Kamala’s powers hereditary, tracing back to the Partition or, perhaps, before that? The bangle merely unlocked inherent abilities, so maybe this is Marvel’s way of introducing Inhumans.

The MCU is also showing more of the Department of Damage Control, initially owned by Tony Stark and Wilson Fisk in the comics. (Remember when ABC greenlit a half-hour comedy for Damage Control in 2015?) Could this spawn into more appearances from the DODC in the future? More on the DODC here.

What was your favorite moment from “Crushed?” Join the conversation alongside other Ms. Marvel fans in the Let Your Spoiler Sideshow Facebook Group, and don’t forget to Let Your Geek Sideshow!