We’re in the second half of Disney+’s Ms. Marvel, and our protagonist is finally getting much-needed answers to long-held questions concerning her family’s powerful connections and abilities. Last week, in “Destined,” Kamala formally met Najma, Kamran’s mother, who hailed from the Noor dimension as one of the ClanDestine. Najma also revealed Kamala herself is a Djinn.

While the ClanDestine on Ms. Marvel don’t seem to be connected to Inhumans (comics Kamala obtained her powers via Terrigen Mist exposure), they’re also presented differently in the Marvel comics. In the comics, the ClanDestine are the progeny of Adam of Destine and Elalyth, a Djinn. Elalyth made Adam immortal, and the pair birthed a host of super-powered children, each with a unique ability.

Perhaps this new direction with the ClanDestine will serve as a soft reboot for the Inhumans as we know them. There might be more to Kamala’s gifts than we’ve seen thus far, and her journey to the past could be the key to unlocking said gifts.

“Seeing Red” is action-packed, heartwarming, and visually stunning, exploring the importance of identity and the ties that bind. The episode also brings Kareem and Waleed, members of the Red Daggers, into the fold with an enthralling cliffhanger. 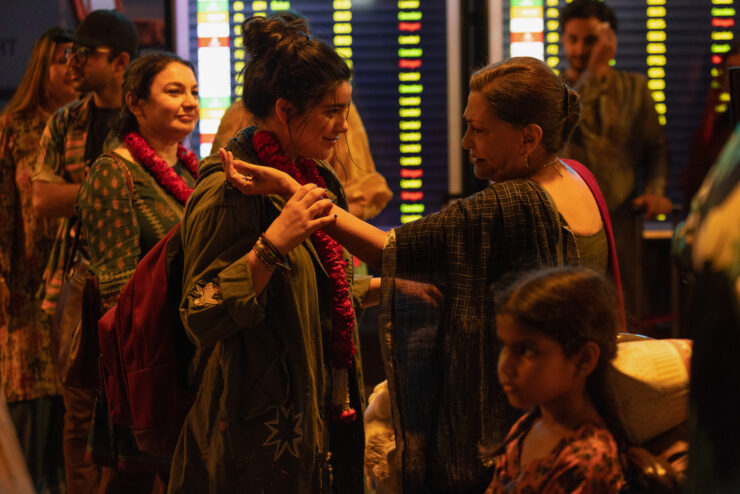 We open with Kamala and Muneeba landing in Karachi. Despite Kamala ruining Aamir and Tyesha’s wedding reception, Muneeba decides to forge a temporary truce with her daughter while they’re in Pakistan.

Kamala’s cousins Zainab and Owais meet our dynamic duo at the Karachi airport, alongside Sana, who Kamala chastises for being awake at such a late hour. Muneeba, Sana, and Kamala arrive later at Sana’s home, and our titular character instantly gravitates toward Sana’s exquisite artwork.

Sana explains that she lost so much during Partition, only coming out on the other side of it with one photo of her as a child. She also shows Kamala a painting she created of her mother, Aisha. Kamala asks Sana why she gave her the bangle. Sana nonchalantly states their family are Djinn, and Kamala questions how her grandmother can be so unfazed by it all. Sana replies it’s merely a matter of genetics.

Then, Sana encourages her granddaughter to utilize this time in Karachi to find answers. Perhaps they can search for them together. She also recounts the night the “trail of stars” helped her reunite with her father before embarking on the last train to Karachi. They’re all magic, baby!

Out on the Town

Zainab, Owais, and Muneeba wake Kamala the following day for lunch at the boat club. Kamala doesn’t think she can eat — jet lag is real, y’all, and it’s brutal.

After lunch, Kamala accompanies Owais and Zainab on a tour around the city. Her cousins point out historical parts of Karachi, including some established during colonial rule. Zainab and Owais want to meet with friends for coffee, but Kamala wishes to explore the train station, on the hunt for an answer about her visions of the train from the night Aisha went missing.

Pulling into the Station

Kamala obtains directions from a street vendor to the train station. Side note: In the scene where the vendor snaps a photo of Kamala, there’s a QR code you can scan, which gives you a free copy of Ms. Marvel #12!

While at the station, she dons the blue domino mask Bruno made for her in last week’s episode. She finds a gorgeous mural featuring Ant-Man (another Ant-Man reference!) which says, “You can start small and still be larger than life.” The “Karachi x Avengers Series, Pt. 4” (Pt. 4 potentially hinting at Phase Four?) mural pays homage to real-life comic book artist Adrian Alphona, known for his work on the Ms. Marvel comics. 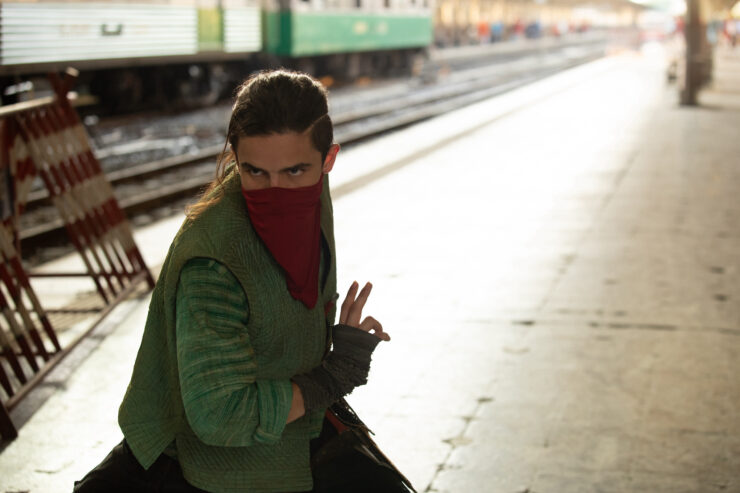 Suddenly, Kamala encounters Kareem, AKA Red Dagger, and the pair duke it out, both on the quick-witted zingers and hand-to-big-glowy-hand combat front. Kamala demonstrates her extraordinary abilities, while Red Dagger’s all about those daggers. When they hear footsteps approaching, Kareem urges Kamala to go with him if she wants to live. Nice Terminator nod. 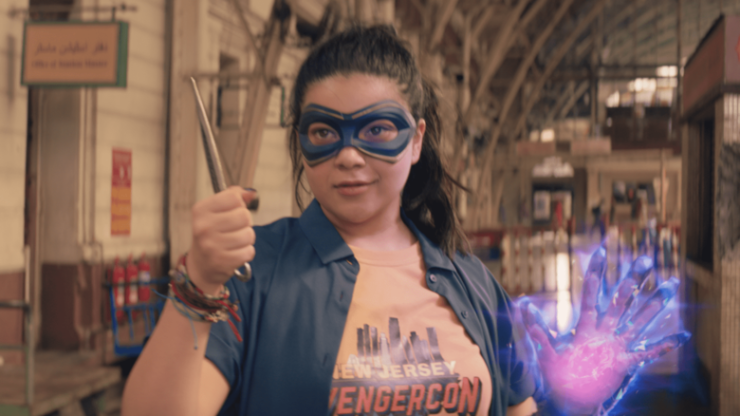 Kareem takes Kamala to the secret headquarters of the Red Daggers. He introduces her to Waleed, who seems to be the head of the Red Daggers organization. We learn the RDs are sworn to protect Karachi from harm.

Waleed reveals he knows who Aisha is and Kamala’s relation to her. He explains the ClanDestine and Aisha are from another realm that runs parallel to Earth, shrouded by the Veil of Noor. Najma and the ClanDestine wish to use Kamala’s bangle to destroy the Veil, thereby terraforming Earth into the Noor dimension. This spells bad news for humans on Earth — sounds an awful lot like one of those nasty Incursions mentioned in Doctor Strange in the Multiverse of Madness.

Additionally, Waleed translates the inscription on Kamala’s bangle. It says, “What you seek is seeking you.”

Meanwhile, at the Department of Damage Control (DODC) Supermax Prison, we see guards escorting Kamran, Najma, Fariha, Aadam, and Saleem. Najma and the others break free of their restraints, taking on the guards in one fell swoop.

However, Najma decides to leave Kamran behind, citing he made his bed when he sided with Kamala. Now, the group heads for Karachi to find the bangle. The baddies are on the loose! On another note, Najma’s not winning that Mother of the Year award after all.

Kamala has an enlightening conversation with Sana about identity and how the older woman is still searching for who she is. Kamala meets with Kareem later for a bonfire on the beach with some pals, where they eat biryani and listen to Kareem’s friend strum on a six-string.

Muneeba finds herself incessantly picking up after her mother, so she confronts Sana regarding the mess in her home. Sana saved seemingly random items like toffee boxes hoping her daughter would return to Karachi. She believes Muneeba traveled to America to flee from her, but Muneeba asserts she merely craved a change of pace and a bit of peace. It’s a touching, heartbreaking scene between a mother and a daughter.

Hot on the heels of Muneeba and Sana’s conversation, Kamala shares hardened toffee with her mother after she gets home from her hangout with Kareem. For once, the two aren’t bickering about Kamala’s need to go against the grain. Maybe Muneeba and Kamala are more alike than they realize. 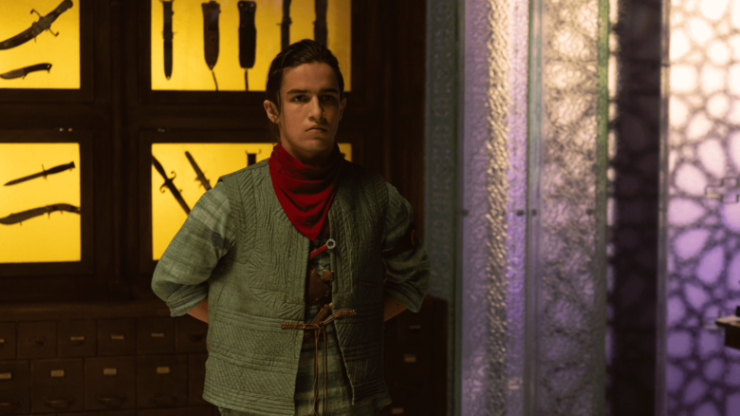 Later, Kamala tests her powers at the Red Daggers headquarters under the watchful eyes of Waleed and Kareem. Kamala even strikes her famous comic book pose, with her arms outstretched and fists clenched. It’s all coming together!

Waleed gives Kamala a beautiful blue vest, telling her that every thread is tied to their history and that she’s not alone. We’re one step closer to Kamala’s complete costume as Ms. Marvel.

Battle for the Bangle 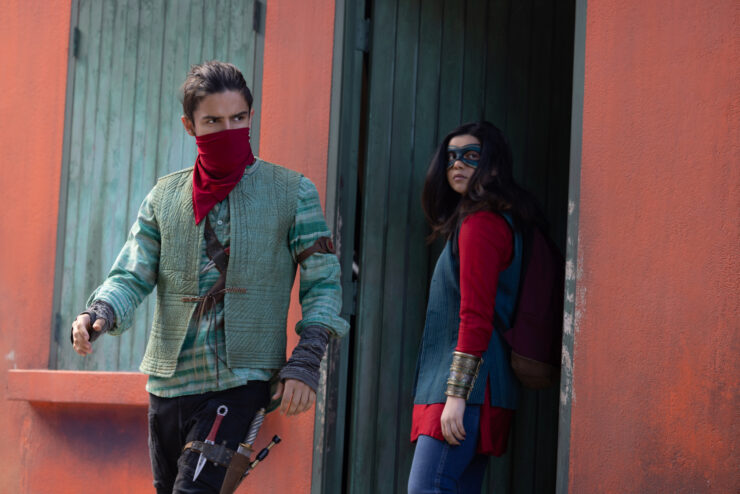 Suddenly, Najma, Fariha, Aadam, and Saleem crash through the ceiling, instantly engaging Waleed in battle. Waleed urges Kareem and Kamala to run so the ClanDestine cannot snag the bangle.

The fight escalates, spreading to the bustling streets of Karachi. Waleed, Kareem, and Kamala escape while Najma and the others give chase. After a high-speed pursuit that destroys property and puts innocent lives in danger (as is the modus operandi for all things Marvel), the battle resumes on foot.

Waleed kills Saleem by lodging two blades into the latter’s chest from a distance. Najma, enraged, stabs Waleed and pushes his body over a balcony. Kamala believes she and Kareem should see if Waleed is okay, but Kareem insists he’s a goner. RIP, Waleed.

Kamala and Red Dagger vs. the ClanDestine 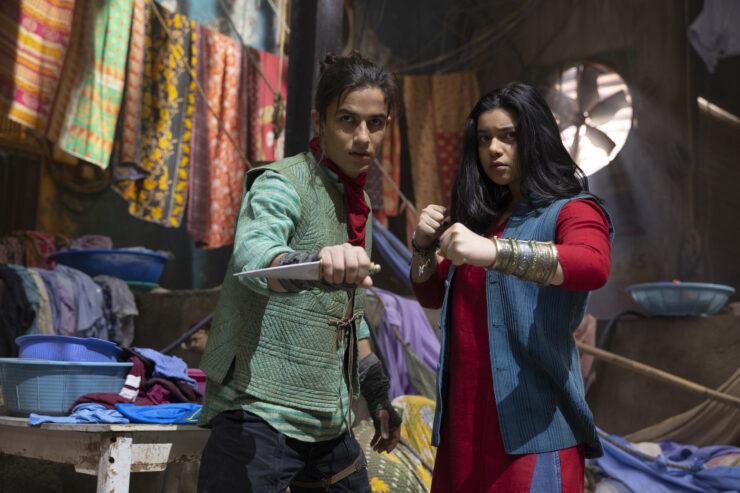 Kamala and Kareem take on Najma, Fariha, and Aadam in a battle of epic proportions. Kareem stabs Aadam, catalyzing another enraged stabbing session from Najma. This time, Kamala shields herself with her bangle, and when Najma’s blade makes contact, something strange happens…

Journey to the Past

Kamala winds up on the train tracks in 1947 during Partition. She watches while folks depart on the trains to Karachi amid the melee. Some part ways with their families, delivering tearful farewells. The effects of what she’s witnessing leave an emotional imprint on Kamala. We don’t see Aisha or young Sana (yet). Kamala overhears one mother telling her daughter “the last train” leaves that night.

Suddenly, our heroine hops atop the train as it prepares to depart the station.

What Will the Past Hold?

One prevailing theme in Ms. Marvel is “family” and the baggage accompanying that. Kamala explores her family’s intergenerational trauma, but she’s not the only one looking for answers in the past. Muneeba and Sana hash it out over the past in “Seeing Red,” confronting the fracture in their relationship. At the same time, Muneeba seeks to ensure the same thing doesn’t occur between her and Kamala.

So, what will the past hold for Kamala in 1947 during Partition? Hopefully, a fruitful trip resulting in more knowledge about Aisha’s connection to the bangle and her subsequent disappearance. Perhaps she’ll glimpse young Sana returning to her father via the “trail of stars.”

Here’s hoping Najma and Fariha don’t hurt Kareem while Kamala’s gone (Maybe time moves differently while Kamala’s in the past?). On another note, Waleed’s quick introduction and death fall into the tired trope of “loving mentor dying too soon,” so here’s hoping he’s not dead and we see him again in a later episode.

What was your favorite moment from “Seeing Red?” Join the conversation alongside other Ms. Marvel fans in the Let Your Spoiler Sideshow Facebook Group, and don’t forget to Let Your Geek Sideshow!