For most, Christmas is a time of happiness and celebration! But for some, it is a time for outright villainy, as a select group of Santa sinners shuffle down chimneys to steal presents, destroy decorations, and compress any incentive to croon carols, often while adopting the universally-accepted appearance of jolly old St. Nick himself.

Fortunately, we’ve checked the naughty list (and we’ve checked it twice) to identify these Christmas-crushing culprits, so that the man in the big red suit can gift-wrap his supply of coal and mail it out to those who rank at the very top of our list of seasonal scoundrels.

So, go ahead and pop on a hand-knitted jumper, grab a cup of hot cocoa, and cozy up next to the fire because we’re about to find out who has been naughty and not-so-nice this year!

5. The Grinch (How the Grinch Stole Christmas) 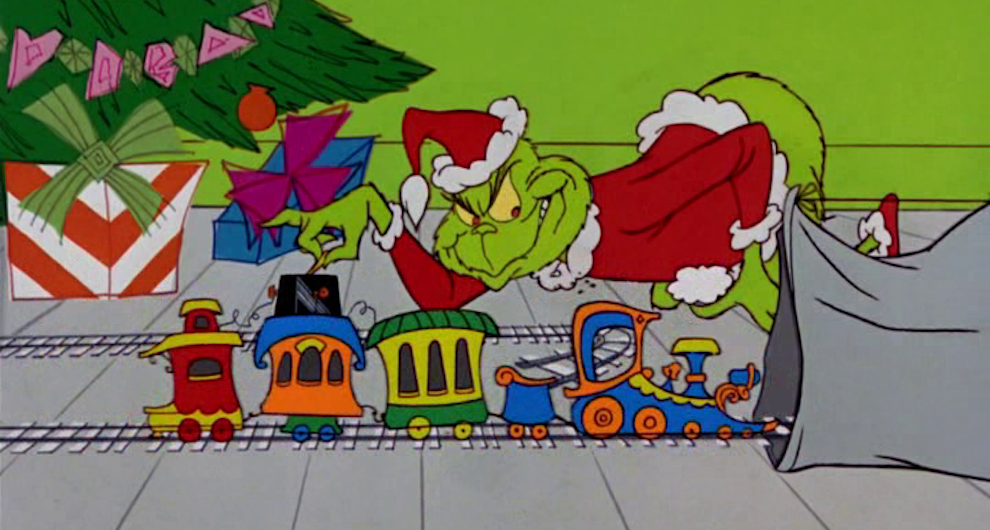 “Why, for fifty-three years I’ve put up with it now. I must stop Christmas from coming… but how?”

Every Who down in Whoville likes Christmas a lot, but the Grinch, who lives just north of Whoville… does not.

With a brain full of spiders and garlic in his soul, the green-furred grump spends most of his days wallowing in self-pity, staring into the abyss, wrestling with his own self-loathing, and concocting dastardly schemes to steal Christmas and everything that comes with it, including the presents, the decorations, and even the roast beast!

However, when the fuzzy recluse discovers that nothing can break the Whos’ spirit, he has a literal change of heart. His seriously shriveled organ grows three sizes bigger and a termite-riddled smile stretches across his face as he starts down the candy-striped road to redemption.

Harry and Marv are two characters that you wouldn’t want sitting at your Christmas dinner table, as they would be side-eyeing your property for an unsolicited gift taking.

At this time of year, these bumbling bandits are a genuine threat, as they take advantage of the holiday season, knowing that several houses are vacant while families visit relatives and take vacations. However, the two small-time crooks get their tinsel in a tangle the moment they meet “the man of the house” in one Chicago suburb.

Harry and Marv’s hilarious holiday hijinks quickly start to unravel as they come up against Kevin McAllister’s epic battle plan, which includes an arsenal of booby traps, from scorching-hot handles and slippery staircases to tumbling toolkits and cascading cement mix, yet they still always appear to be “thirsty for more.”

“I am an old man, and most people hate me. But I don’t like them either so that makes it all even.”

If you could stick a bow on compassion and kindness, then that would be the perfect present for Old Man Potter.

Mr. Potter reads directly from the Ebenezer Scrooge handbook, as he is flush with money but is not flush with much anything else. He brandishes his power to control the postcard-perfect town of Bedford Falls and make George Bailey’s life an utter misery, as he steals from Bailey’s Building & Loan Company, then blames George for the misfortune.

Consequently, Bailey wishes that he had never been born, and an angel shows up to give him an insight into what would have happened if he hadn’t existed, which makes him realize how wonderful his life really is. Potter, on the other hand, never seems to receive the deserved comeuppance for his dastardly actions.

“This time John Wayne does not walk off into the sunset with Grace Kelly.”

Hans Gruber is a bad guy for life, not just for Christmas, as he is the type of cold-hearted character to exercise villainy 365 days of the year.

The German master terrorist RSVPs to confirm his attendance to a party that he never even received an invite to, as he unexpectedly joins the Nakatomi Plaza holiday bash on Christmas Eve. He arrives with a horde of heinous henchmen, intent on making a bang with their assortment of handguns, pistols, and machine guns as opposed to party poppers.

Gruber holds everyone at the office party hostage as part of his evil plot to steal $600 million from the massive corporation. Fortunately, John McLane, a street-smart New York cop, is in the building and ready to take down the expert strategist with a penchant for expensive couture.

(And if you’re wondering whether Die Hard is actually a Christmas movie in the first place, maybe the Die Hard illustrated Christmas book read by badass voice actor Steve Blum will change your mind.)

“If I could work my will, every idiot who goes about with ‘Merry Christmas’ on his lips should be boiled with his own pudding and buried with a stake of holly through his heart.”

Scrooge by name and Scrooge by nature, Ebenezer is synonymous with seasonal suffering and sorrow.

The quintessential Christmas villain’s reputation derives from his reign of holiday horror, in which he displays a complete lack of empathy as he evicts people who are late on their loans, spares no coal for the stove in his measly office, and claims the poor are better off dead to “decrease the surplus population.”

However, one night, the ghosts of Christmas Past, Present, and Future make an unexpected visit at his door. The three spirits take the wicked old soul on a journey of self-discovery, wherein he confronts past memories and regrets, as well as his current behavior and the future ramifications. He might learn a valuable lesson from the experience but his previous deeds cannot quite be undone.

Bah! Humbug! Which of these cantankerous characters would make it on to your naughty list? Are there any other fictional rogues that you would add to the line-up? Let Your Geek Sideshow and tell us in the comments!