Empire shared the first look at John Cena on set in his full Peacemaker costume. The bloody garb opens up a discussion of morality and idealism that both James Gunn and John Cena explore in the article.

“Peacemaker has a clear set of ideals that I find really interesting,” said showrunner, writer, and director James Gunn. “You know: ‘I want peace no matter how many men, women and children I need to kill to get it.’ Sounds like nonsense, but it also makes a lot of sense. And you see in John’s performance how he does not feel good about it – something I thought was the seed of an entire eight-episode show.”

“He represents a part of the world populace that is problematic to say the least,” says Gunn, “and puts him in a situation where he has to face the choices he’s made throughout his life and the extremity of his views.” 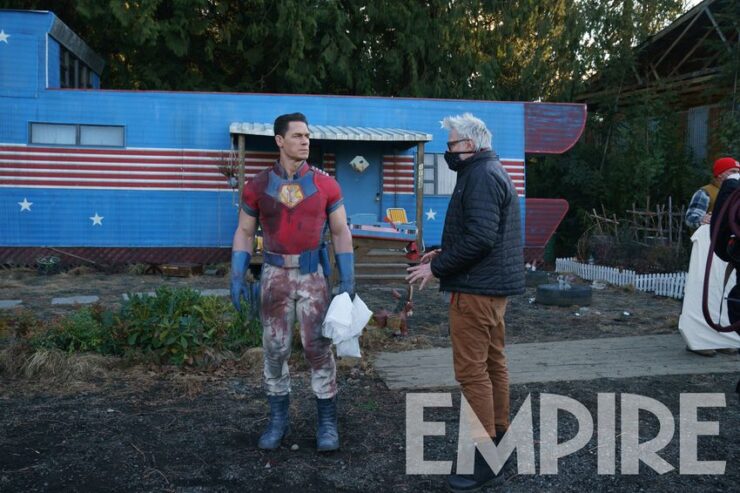 Gunn isn’t the only one who believes that Peacemaker exudes problematic behavior. This guy is a loud, obnoxious, bro-ey douchebag,” Cena tells Empire. “That sucks. But why? At what point did he become such a douchebag and what does that mean? There’s a lot to dive into there.” And the show fully intends to dive into those problems.

Peacemaker struggles with being a hero in a complicated world. Not only does he want to do the right thing, he wants to make the biggest impact he possibly can, and he feels like he has pretty intense competition. Gunn says, “He lives in the world of Superman, Batman and Aquaman, and that is not an easy thing for him to contend with.”

He’ll have to contend with his sinister heroics in the show, but we’ll actually see Peacemaker’s character debut in James Gunn’s The Suicide Squad. Here is the synopsis for the film:

Welcome to hell—a.k.a. Belle Reve, the prison with the highest mortality rate in the US of A. Where the worst Super-Villains are kept and where they will do anything to get out—even join the super-secret, super-shady Task Force X. Today’s do-or-die assignment? Assemble a collection of cons, including Bloodsport, Peacemaker, Captain Boomerang, Ratcatcher 2, Savant, King Shark, Blackguard, Javelin and everyone’s favorite psycho, Harley Quinn. Then arm them heavily and drop them (literally) on the remote, enemy-infused island of Corto Maltese. Trekking through a jungle teeming with militant adversaries and guerrilla forces at every turn, the Squad is on a search-and-destroy mission with only Colonel Rick Flag on the ground to make them behave…and Amanda Waller’s government techies in their ears, tracking their every movement. And as always, one wrong move and they’re dead (whether at the hands of their opponents, a teammate, or Waller herself). If anyone’s laying down bets, the smart money is against them—all of them.

James Gunn’s The Suicide Squad premieres in theaters and on HBO Max on August 6th, 2021.

This is just one major story from the Pop Culture Headlines. For more daily news updates, enable Pop Culture & Movie News- Let Your Geek SideShow on your Amazon Alexa device or listen through iTunes and get all the latest geek headlines in a convenient and timely fashion.