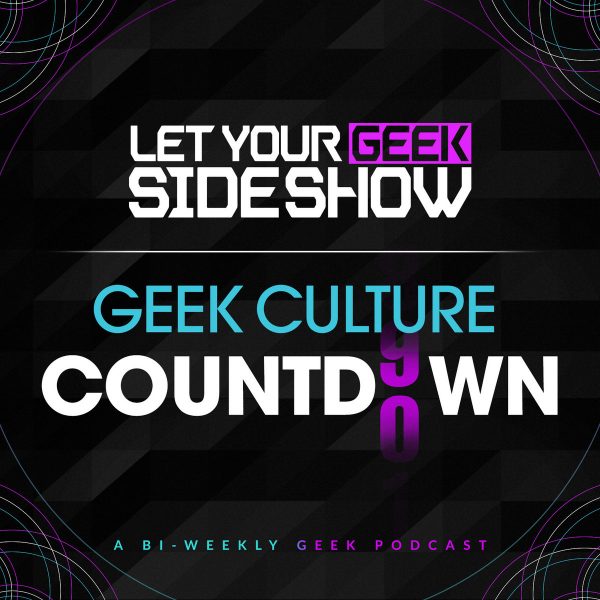 The first episode covers our Top 10 Cats in Geek Culture– from across books, movies, comics, television, and games.  Meet cats from Harry Potter, Alien, Batman, Saga, and more!  Will your favorite feline make the cut?  Find out in the first episode of Geek Culture Countdown: 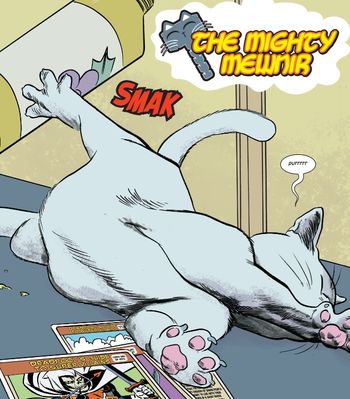 If you’ve ever given your pet a geeky name, you’ll understand Mew. Mew is actually short for Mewnir, like Thor’s hammer Mjolnir. She belongs to Nancy Whitehead, who is Squirrel Girl’s college roommate and now best friend. Mewnir also served as the inspiration for the hilarious Cat-Thor, a fanfiction character in the Squirrel Girl universe. Cat-Thor even appeared in The Mighty Thor series, so basically, Nancy’s fanfiction is canon now. Mew may be pretty new, but she definitely deserves a spot in our top 10 list. 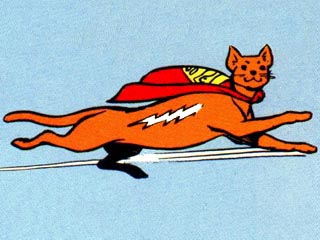 Streaky is one of a number of super-powered animals from Action Comics, but is mostly known for being Supergirl’s pet cat. Streaky gained his powers from X-Kryptonite, created in a failed science experiment to neutralize the green ore’s deadly effects. In addition to his powers, he also got an adorable little cape, which is why Streaky soars to spot #9 in our list. The CW Supergirl show even gave him a recent shoutout! 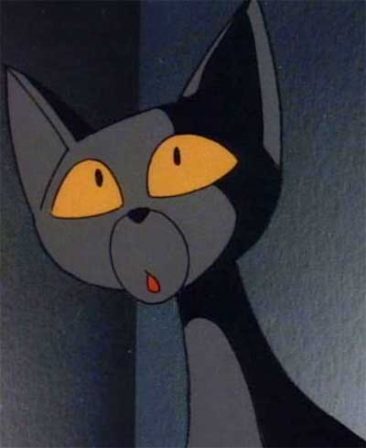 Though Catwoman has always kept quite a few cats in her company (she is Catwoman after all), only one of them was Isis. Named after the Egyptian goddess of protection, Isis provided Catwoman with exactly that. While Catwoman was off fighting the likes of Batman and Superman, Isis took out their dogs. She even took on another cat on this list – Streaky – in the show Krypto the Superdog. 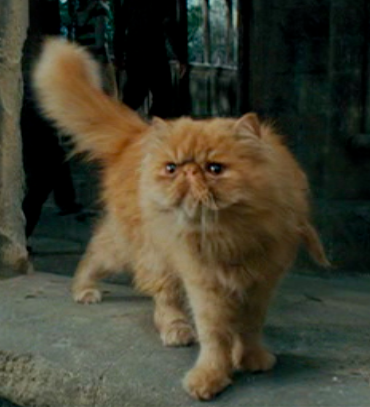 Yes, yes… Crookshanks is technically “half-kneazle” but that’s a magical cat, so we think he belongs. His ability to recognize humans in their animagus form helped save the day in Harry Potter and the Prisoner of Azkaban. In fact, this ability ran so deep that Peter Pettigrew had to stun Crookshanks in order to protect himself from being discovered. 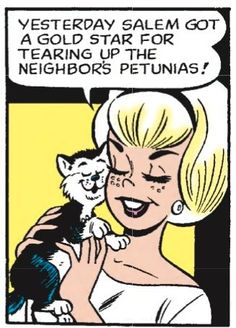 Salem was actually introduced to the Sabrina the Teenage Witch comics as an ordinary orange housecat with no powers. Following the success of the 90’s Sabrina sitcom, the sassy Salem became a former witch who had been sentenced to 100 years as a black cat as punishment for trying to take over the world. His wit is as sharp as his claws, securing Salem the #6 spot in our list.

We’re halfway done and before we move on, we’d like to take a chance to go through a couple of cats that deserve honorable mentions… 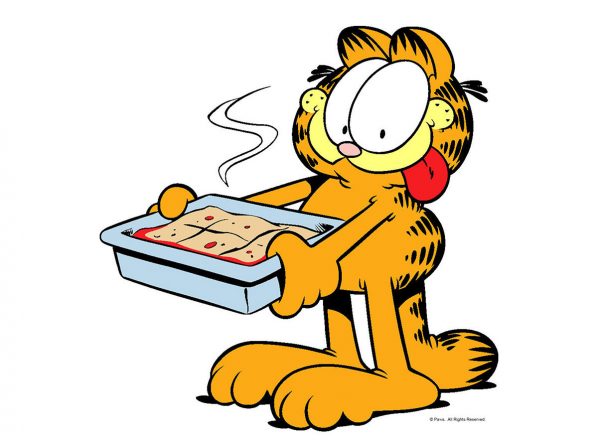 We couldn’t do a top cats in culture list without the cat who hates Mondays! Garfield takes honorable mention on this list, mostly because we couldn’t think of where the lasagna loving feline favorite would go. No position would appear to do him justice.

Speaking of justice, our other slot goes to a cat who many felt did not have a chance for justice – Mews from Stranger Things. Mostly just a normal pet to the Henderson family, Mews became dinner for a Demo-dog and left the show far too soon. Will he ever receive reward for his sacrifice? 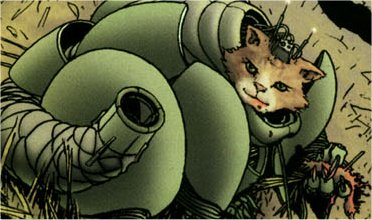 Number five on this list is the cat that will break your heart, Tinker or “2” from Grant Morrison’s We3. There’s not a lot of information on Tinker. She only appears in a singular mini series from Vertigo comics. In her short time, she managed to survive being weaponized and discover her true animal nature. If she doesn’t own a piece of your heart by the end… we’ll question your humanity.

Hairball had humble beginnings as the pet of Dr. Nicholas Benson, a scientist at Hammond Research Lab in Marvel comics. He gained powers in the same lab accident that created the bizarre hero Speedball, and became Hairball the Pet Avenger. He has kinetic energy powers which manifest as multi-colored bubbles, and he once wielded the Soul Gem in a fight against Thanos. For that, Hairball takes spot #4 on our Geek Culture Countdown. 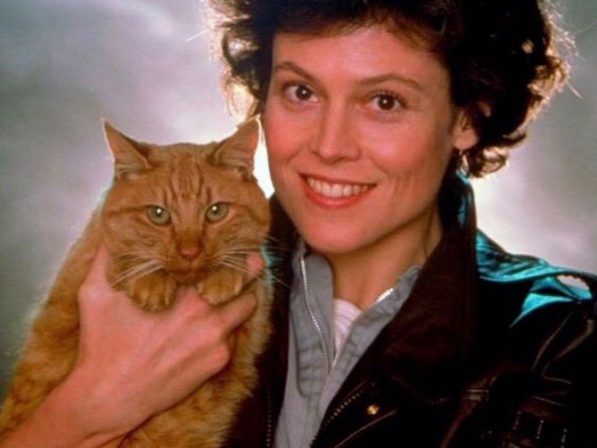 Even though Jonesy’s wiki-page says he’s the best cat ever, he is taking spot #3 on our list. Jonesy the ginger tomcat was kept aboard the USCSS Nostromo to control rodents aboard the ship. He and his owner Ellen Ripley were the only two to survive the Xenomorph incident, and then survived the 57 year cryostasis after their escape. That makes him almost 60 years old! That has to be worth something! 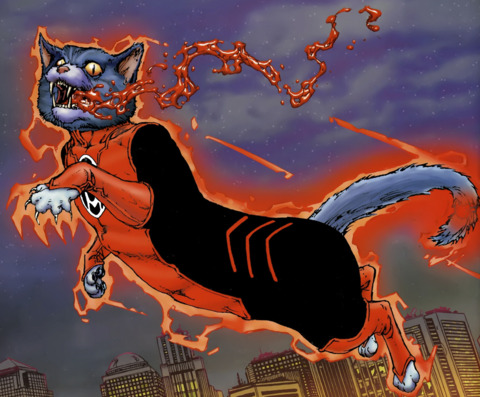 We’d be remiss if we left out the darling of the DC universe Dex-Starr. It might seem strange to call him that, being that his powers are based on rage and he has killed with his Red Lantern vomit. However, the story of a Brooklyn based stray turned hero (of sorts), is one born in tragedy. So much, in fact, that it summoned the rage of the Red Lantern Corps and recruited the curious cat as a member. Now, Dex-Starr can be found searching to avenge the death of his original owner – the only being who was ever kind to him. 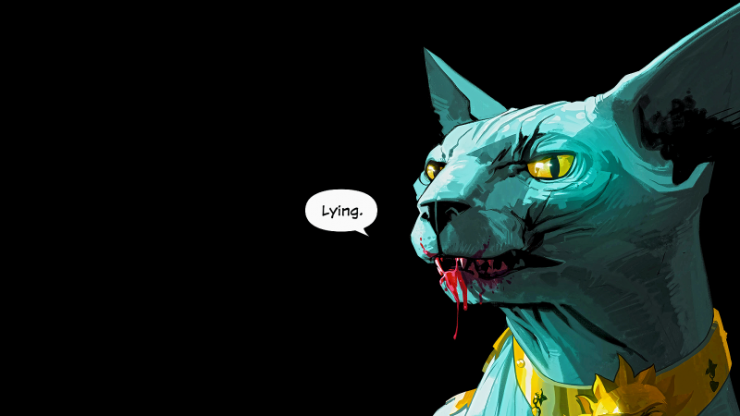 Come on? Who else would be number one? She’d call us out right away as “lying” if we chose anyone else. Lying Cat is a Sphynx cat from the popular Image series, Saga. While she her power of lie detection comes in handy, what really gave her the top spot is her relationship with her companion, The Will. They have the true master/pet relationship that everyone has with their cat – no one knows who is in charge. And even though Lying Cats are always supposed to play by the rules, Lying Cat has fought thugs for The Will on several occasions.

You can check out the full Geek Culture Countdown podcast on iTunes. Keep an eye out for new episodes and more ways to listen coming soon.

What topics would you like to see covered in upcoming episodes?  Know another cat that should have made the cut in this week’s countdown?

Let Your Geek SideShow and tell us in the comments!