The time to return to a galaxy far, far away is nigh! Obi-Wan Kenobi™, the six-episode miniseries slated for release on Disney+, brings fan-favorite Ewan McGregor back into the Jedi™ fold. Hayden Christensen is also reprising his role as Darth Vader™. I’d go so far as to say this series might be the most anticipated Star Wars™ installment yet, at least on the small screen. Undoubtedly, we’re in for many exciting developments on the horizon.

So, in honor of Obi-Wan Kenobi™ making his grand re-entrance, I compiled a list of what I’d like to see in the show. Read on!

Obi-Wan in the Jedi Temple on Coruscant

One remarkable aspect of the Star Wars universe is its intricate mythology. There’s so much uncharted territory ripe for exploration, and it’s fun for fans to connect the elaborate sci-fi puzzle pieces.

Since this is a series about Obi-Wan Kenobi, why not give viewers a taste of his backstory, namely his formative years in the Jedi Temple on Coruscant?™ We know he was born on Stewjon™ (on another note, it would be cool to catch a glimpse of his family before becoming a Jedi) before Qui-Gon Jinn™ brought Obi-Wan under his tutelage, training him in the ways of the Force.

I get a kick out of seeing the connective tissue between a character’s past and present, granting us more insight into their motives and desires. Give that to us, Obi-Wan Kenobi!

A reunion between Obi-Wan and Ahsoka 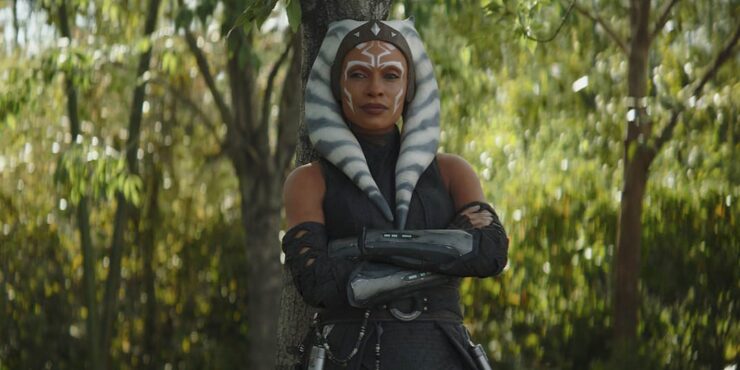 I understand if some folks feel weary regarding the onslaught of cameos in the Star Wars universe, as it mirrors the standard formula of the MCU catalog — everything must be connected! I want so-and-so to fight alongside that character! But Marvel and Star Wars fall under the Disney umbrella, so, you know, there’s that.

While I’m 99 percent sure it won’t happen, I’d love to see a reunion between Obi-Wan and Ahsoka Tano™. For starters, it makes sense. Ahsoka was Anakin Skywalker’s Padawan™. Yoda™ gave Anakin the task of training Ahsoka while the latter was still undergoing his own Padawan training.

Obi-Wan and Ahsoka view Anakin like family and feel equally remorseful when he turns to the dark side. And since Darth Vader has a sizable role in Obi-Wan Kenobi, why not throw in a Vader/Ahsoka reunion while we’re at it.

A glimpse of Leia as a child on Alderaan

Okay, hear me out — I know Obi-Wan vows to keep a watchful eye on Luke Skywalker™ amid his exile on Tatooine™, but I’d love to see what little Leia™ is up to on Alderaan™. We’ve seen so much of Luke in the live-action format. It doesn’t have to be the centerpiece of a whole episode, merely a morsel to sate my curiosity.

As much as folks love to pick apart the Star Wars sequel trilogy, The Last Jedi touches on Leia’s Force sensitivity. Yoda always thought Leia was more suited to being a Jedi than her brother. Plus, Leia already has a connection to Obi-Wan, so it’s not too off base to show her on Alderaan as a child. It could lead to some dazzling on-screen magic.

I’m not sure how the flow of time will pan out on the show, but we could see quite a bit from Obi-Wan’s storied ledger. Recently, Disney brought Black Krrsantan™ into the galactic fold, bringing the infamous Wookiee™ bounty hunter onto The Book of Boba Fett™. While Boba Fett and Obi-Wan take place in different times, Krrsantan has a history with both the famed bounty hunter and the wise Jedi.

Krrsantan was dispatched at one point by Jabba the Hutt™ to find the unlucky soul (AKA Obi-Wan) who put the kibosh on his water tax. So, Krrsantan went to the Lars homestead, taking Owen Lars™ hostage to lure Obi-Wan into his trap. Obi-Wan and Krrsantan duked it out, but the latter ended up fleeing Tatooine. The formidable Wookiee eventually falls under the employ of Darth Vader. So many connections!

I’m down for an Obi-Wan versus Krrsantan fight. Who wouldn’t want more epic battles in Star Wars?

Some backstory for the Grand Inquisitor

Even baddies deserve an enthralling backstory. If you’re an avid fan of Star Wars: Rebels, you already know about The Grand Inquisitor™. Of course, Darth Vader is most likely the main antagonist of Obi-Wan Kenobi, given his history with our titular character, but the host of Inquisitors tracking Obi-Wan will surely throw a wrench in his plans.

Fun fact: TGI wasn’t always Team Dark Side; he used to be a Jedi Temple Guard. Then, he swore off the light side in favor of good ol’ fashioned darkness. Darth Vader took The Grand Inquisitor under his wing, ordering him to hunt the Jedi who survived the Great Jedi Purge™. I’d love to see his origins on Obi-Wan Kenobi.

On a somewhat unrelated note, TGI shares a connection with Ahsoka, so all the more reason to bring her into the series as well.

Reva™, AKA the Third Sister™, is another intriguing Force-sensitive antagonist for Obi-Wan. Like The Grand Inquisitor, Reva was a Jedi who disavowed the light side, swearing allegiance to Darth Vader. She also must track down the remaining Jedis who narrowly escaped the Great Jedi Purge, which began at the end of the Clone Wars™.

I hope we see Reva’s role in the Great Jedi Purge and perhaps her motivations for turning her back on the Jedi. I’m a sucker for character development. What can I say?

We know Reva will butt heads with Owen Lars, which could jeopardize Luke’s well-being while on Tatooine and force Obi-Wan to intervene. I’d also love to see a badass fight unfurl between Obi-Wan and Reva, as she could prove a worthy adversary for him as a former Jedi herself.

Obi-Wan and Qui-Gon Jinn on Mandalore

While Obi-Wan was a youngster, he spent time with Qui-Gon Jinn on Mandalore™ protecting Duchess Satine Kryze™, the estranged sister of Bo-Katan Kryze™. Obi-Wan and his Master shield Satine from insurgents. They were on the run for a year while bounty hunters pursued them. Obi-Wan grew close to Satine, falling head over heels for her.

Unfortunately, he forged ahead despite his feelings and was tasked with another mission once his assignment on Mandalore was complete.

Of course, this would be a flashback, but I wouldn’t say no to watching a younger Obi-Wan fall in love with Satine on Mandalore. I would also like to note that Ewan McGregor’s Christian became smitten with Nicole Kidman’s Satine in 2001’s Moulin Rouge!, so I’m not saying it’s written in the stars, but I’m not not saying that.

What are you hoping to see when Obi-Wan Kenobi hits Disney+? Keep the Star Wars conversation going over at side.show/geekgroup, and don’t forget to Let Your Geek Sideshow!