When it rains, it pours — at least that must be The Penguin’s motto. You’d be hard pressed to encounter Penguin without his signature umbrella weapons, especially in a fight against Batman.

You’ve seen The Penguin’s umbrella used as a machine gun or maybe even a sword. Often, the material used is bulletproof. And of course his helicopter umbrella is a fan-favorite gadget. In the DC comics, however, Oswald Cobblepot’s umbrella started off as a suave tool that could hide stolen items while also matching his debonair persona. With time, he added more and more umbrella technology to his arsenal.

How many of his trademark weapons have you seen in action? Take a stroll through some of the Gentleman of Crime’s best trick umbrellas. 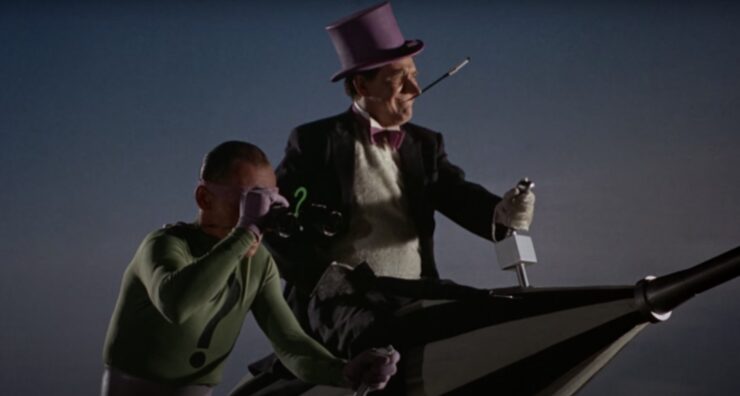 Who says penguins can’t fly? One of Penguin’s most enduring moves is when he’s inevitably defeated by Batman and must make his escape. In that pivotal moment of flight, Penguin can always count on his umbrellas to come through for him.

Many times in the comics, his umbrella has doubled as a getaway device. In Batman #36, Penguin’s umbrella transformed into a parachute by opening wide so Penguin could nail the landing. Another time, in Detective Comics #87, a paraglider umbrella whisked Penguin out from Batman’s clutches. And finally, in the 1966 TV movie, Penguin provides his team of villains and henchmen with a fleet of jet-powered, giant rocket umbrellas. Umbrellas really are a versatile mode of transport.

Of course, there was also that one time Penguin used a pogo-stick umbrella in Batman #36. They can’t all be winners. 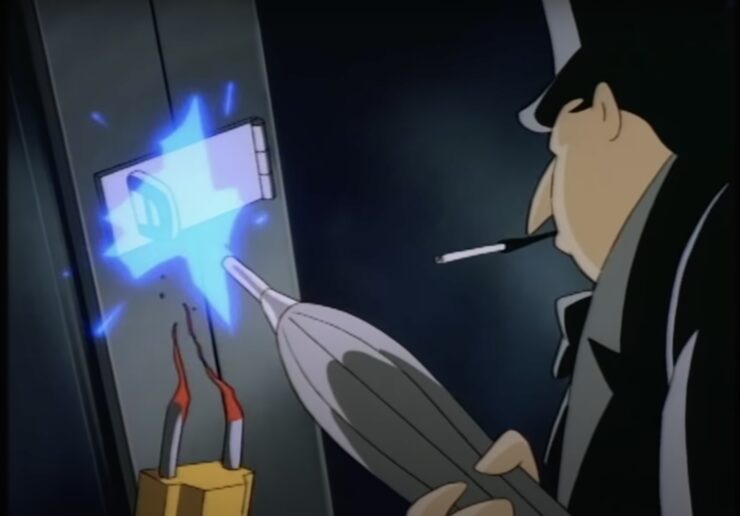 In the animated series of the ’90s, both Batman and his Rogues Gallery played to their many strengths. The Penguin of Batman: The Animated Series had arguably one of the most impressive umbrella set ups, especially during the episode “Almost Got ‘Im.”

Some villains are only as good as their gadgets, but a multipurpose gadget? Now that’s the ticket. Penguin’s umbrella first emitted a heat beam to melt down the lock on the Gotham Zoo. Once inside, Batman attempted to stop the villain but Penguin’s umbrella then blasted his nemesis with a bright mist. At first it seemed like Batman was unfazed but soon a horde of hummingbirds pursued him. It turned out that the mist was actually derived from nectar, which attracted the hummingbirds whose beaks were tipped in poison. Birds of a feather kill together, you know. 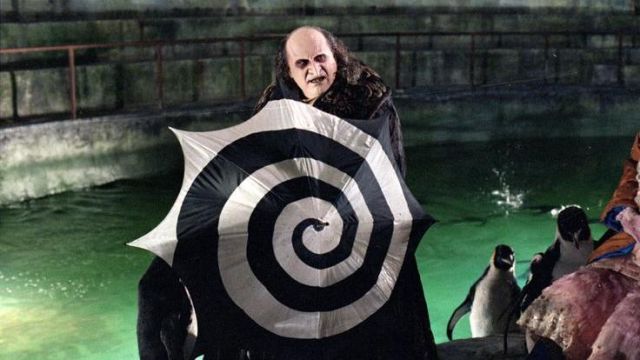 The best offense is a good defense, which is why some of Penguin’s umbrellas are tools of subterfuge. They allow the criminal mastermind to thwart Batman’s advanced technology as well as giving him the upper claw in a tense showdown.

When going up against Batman, it’s safe to assume the Caped Crusader is probably sneaking around in the shadows or using high-tech gadgetry to get the job done. That’s why Penguin, in the 1960s television show, developed an umbrella with a handle that contained an electronic Bat device detector. With this umbrella, he would never be caught by surprise again.

While battery-powered ingenuity is never the wrong way to go, there’s something to be said about a beautiful, handmade textile. If you stare too closely at the swirling black and white pattern of Penguin’s umbrella in Tim Burton’s Batman Returns, you just might find yourself hypnotized — or, at the very least, the owner of a splitting headache.

Singin’ in the Pain 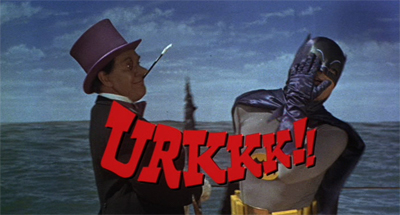 Umbrellas also have extremely sharp tips, the perfect vessel for hidden weapons and electronics. Like the criminal mastermind he is, Penguin has outfitted his umbrella tips with net guns, dry ice, and even tiny umbrella projectiles! His umbrellas have also been known to fire in reverse. This always throws off his opponents, as was the case when Batman was surprised with a face full of gas.

Other times, you gotta bring the heat. A flamethrower umbrella appeared in Batman Returns and the 1960s TV Penguin packed a real punch with his boxing glove umbrella.

Holy illegal umbrellas, Batman! As shown by The Penguin, umbrellas are a surprisingly useful villainous weapon in an easily inconspicuous form. As he once pointed out, “I only make the umbrellas — what they do after they leave here is hardly my affair, now is it?”

Which trick umbrella from Penguin is your favorite? Let us know in the comments and don’t forget to Let Your Geek Sideshow!