This week, Poison Ivy will continue her return in The CW’s Batwoman as a member of Ryan’s expanding Rogues Gallery. Last year, her origin was further explored in the graphic novel Poison Ivy: Thorns. For those unfamiliar with the character, it would be easy to simply consider her a seductress in green. But they would be wrong.

At her best, Poison Ivy is a woman who defies the often destructive ways of man. She is autonomy personified. As a villain, Poison Ivy is ruthless, manipulative, and cunning — all successful qualities in a criminal mastermind. As a metahuman, her power over nature is legendary (she’s even been named an Avatar of the Green). And as an antihero, she’s the sort of morally questionable outlaw who defends those without a voice, from plants to children to traumatized friends.

However, in addition to all of the above, Poison Ivy is a fashion icon. Her outfits from the Batman & Robin film, the character’s live-action debut, are perfect examples. Of course, there’s plenty for Batman fans to find fault with in this film, which we’ll point out, but Ivy’s costuming is undeniably some of the greatest in super-villain film history.

“Hell, I am Mother Nature.” 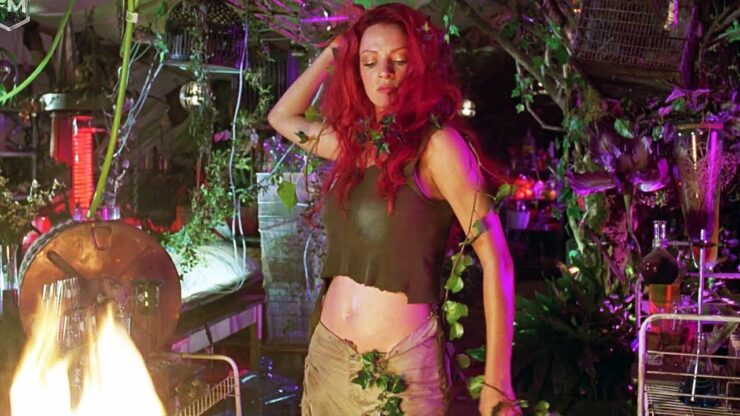 Before there was ever Poison Ivy, there was Pamela Isley. In nearly every iteration of the character, she is a talented and celebrated botanist whose dedication to saving the planet’s flora is priority number one. In Batman & Robin, Pamela Isley works in the same laboratory as Jason Woodrue. She is more than a little frumpy and her work receives less funding than Woodrue’s research.

He takes advantage of her altruistic naïveté and she becomes the victim of his predatory sabotage. This is a common explanation for Isley’s transformation and in the comics, Woodrue even becomes the Floronic Man, a terrifying adversary for Ivy. 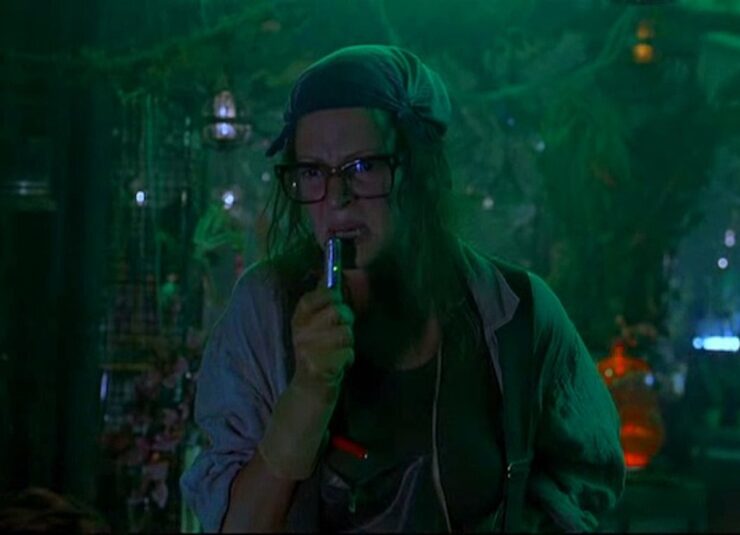 Here, however, Woodrue is merely a device to initiate Pamela’s arc as Poison Ivy. After she emerges from a pile of animal-plant toxins, she says, “They replaced my blood with aloe, my skin with chlorophyll, and filled my lips with venom.” Okay, so the science there doesn’t really check out, since chlorophyll is a pigment and her skin would be more green (like she has sometimes appeared in the comics and the Harley Quinn TV series). Plus, there’s no mention of pheromones, her signature tool of persuasion. Nevertheless, this transformation establishes that she is not someone to be taken lightly. 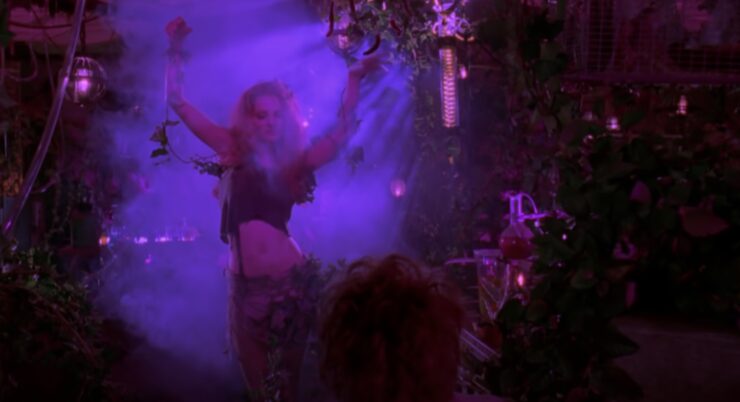 Ivy has flowered in many different forms, some more in line with Swamp Thing (such as her current appearance in Batman: Fear State), but in this film she is superficially human. While Uma Thurman’s portrayal of Poison Ivy is campy and over the top, she does nail the villain’s deep-rooted desire for plants to reign supreme. And throughout the film, her villainous outfits align with the seasons, showing her progression from fresh sprout on the scene to a Venus flytrap in full bloom. 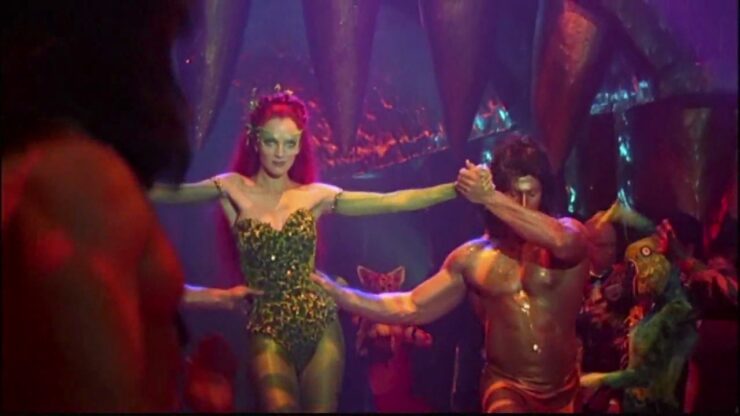 Poison Ivy’s first public appearance in Batman & Robin is at a fundraiser gala. At first, she is in disguise. The purple gorilla suit might seem nonsensical but actually it’s an allusion to another film femme fatale, Marlene Dietrich in Blonde Venus. As a cover of The Coasters’ “Poison Ivy” plays in the background, the villain puts the entire audience (and the Dynamic Duo) under her pheromonal spell.

Once on stage, she is wearing an outfit that’s nearly identical to her sensational 1966 debut in DC Comics. This ensemble is probably her most iconic — it’s a green bodysuit, with the corset covered in dazzling ivy and a crown of leaves atop her flowing red hair. The film also adds an extra touch of flora to Ivy’s look with her leafy eyebrows, a nod to the way her body has become more plant than person. This is Ivy’s spring. 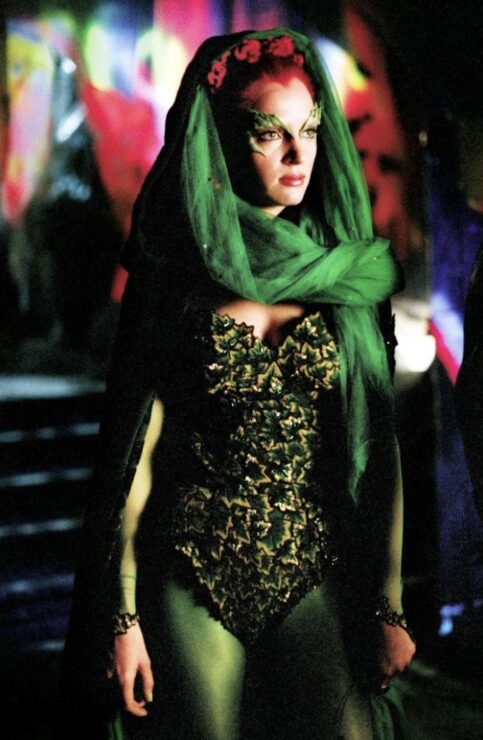 At the gala, she is surrounded by other women dressed as orchids and magnolias. Though her namesake is technically considered a weed, Ivy outshines these other garden gals. In this stage of her criminal career, Ivy is only just beginning to sow her evil seeds. She is fresh and new, a verdant villain on the rise.

Every super-villain needs a lair and Ivy finds hers in the abandoned Turkish Baths of Gotham City. She runs out the local gang occupying the space before using her power to create her own garden, a refuge for her to continue her work in giving plants a way to fight back against humans. Vines curl upward and petals unfurl as Ivy plots her paradise. 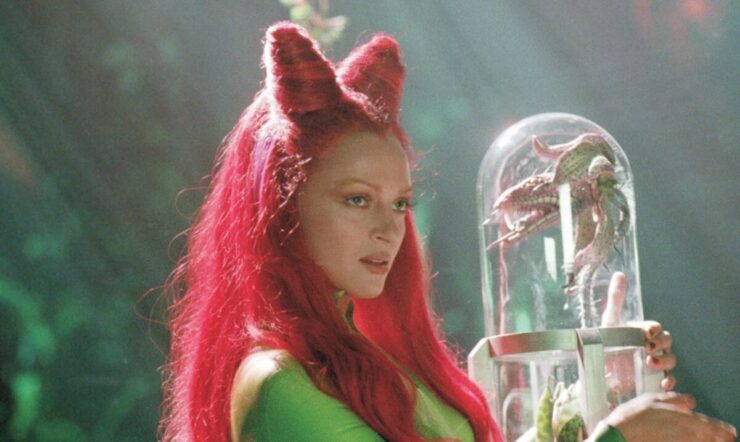 After the first blooms of spring, the deep green of summer follows. And in this season, Poison Ivy is at the peak of her power. Her outfit is more battle ready, with red-tipped gloves that evoke her toxins and a bodysuit that lends itself to a variety of crimes, such as high-profile jail breaks. The colors are still predominantly shades of green, but her belt and eyebrows also display earthy golden hues — all signs pointing to a plant that is maturing.

In this ensemble she also creates her plant-animal hybrids, a manifestation of her supreme control over nature and her growing plan to fight back against mankind. She’s a far cry from that meek botanical scientist back in the jungle. More than activism, this mission of Poison Ivy is in line with her eco-terrorist roots. 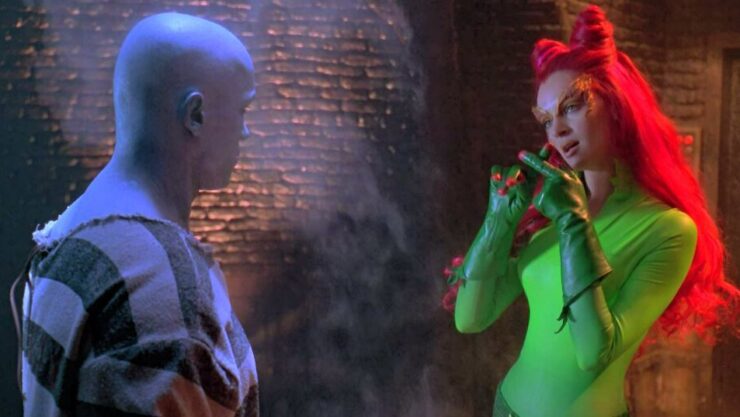 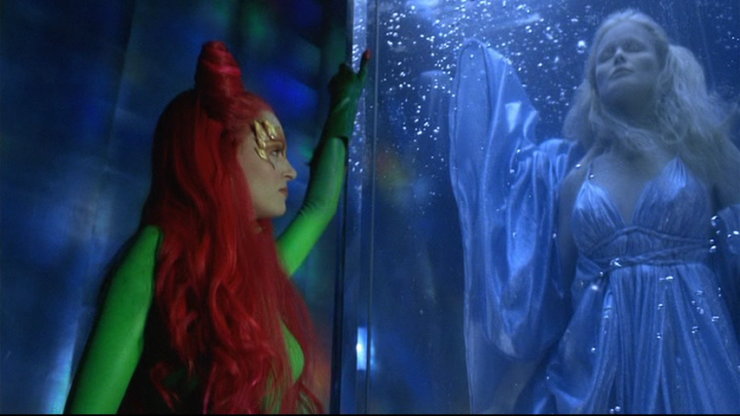 This season of Poison Ivy’s fashion is also when she officially teams up with Mr. Freeze. After breaking him out from jail using her “love dust,” she brings him back to her lair and proposes an alliance. She proceeds to drive a hedge, er wedge, between Batman and Robin and she employs Bane as her muscle.

Finally her plan is beginning to blossom. This is Poison Ivy at her most successful. During her summer era, Ivy also kills Freeze’s wife in cold-blooded murder, a choice which will cost her. 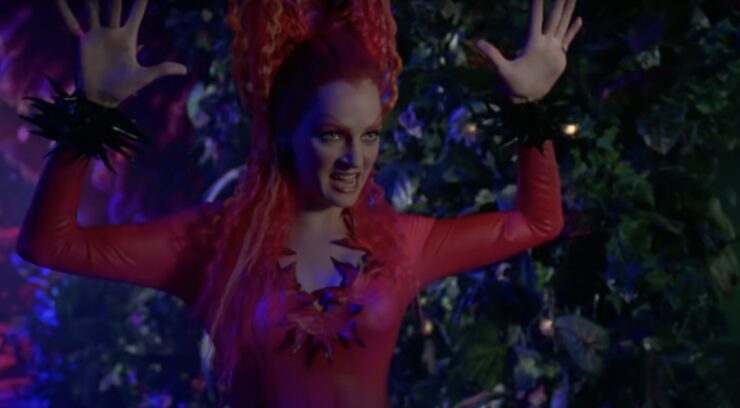 When Poison Ivy pulls the plug from Nora’s cryogenic chamber, she begins her descent into autumn. This act of villainous hubris proves to be the tipping point as she sacrifices Mr. Freeze’s trust and gives the Bat-family the lead they’d been looking for in taking her down. It’s giving fall in more ways than one.

Ivy’s outfit in the last act of the film is dominated by warm tones, deep crimson and bright orange. Most notably, there’s barely any green in sight. Her sleeves, which extend the length of her arm, are almost like the thorns of a rose while her hair, in its curled plumage, resembles the hungry mouth of her carnivorous plants. 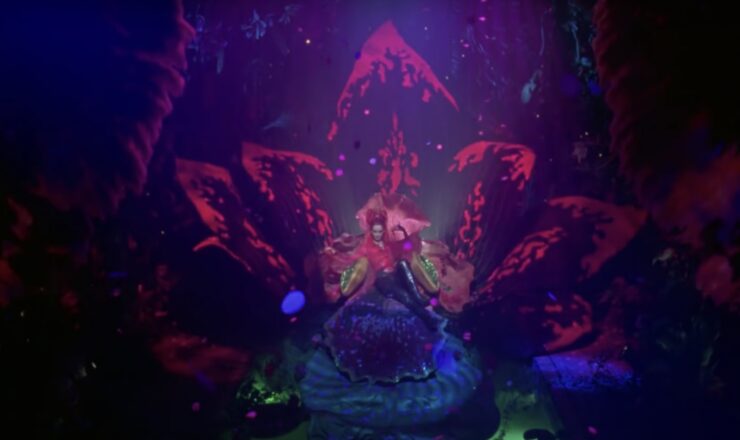 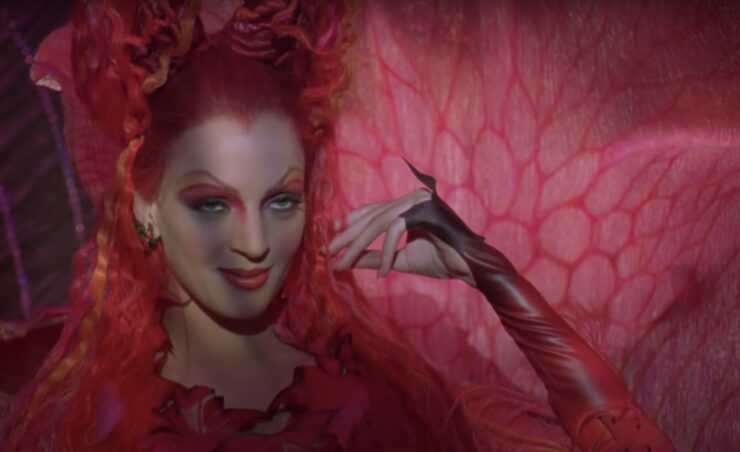 Like an autumn leaf, she’s dazzling to look at but also on her way out. Every leaf must fall from its branch and Poison Ivy is no different. In her most extravagant look of the film, Ivy is a sight to behold but her vanity — shown in a moment of distraction when she spies her reflection in her blade — allows her to be defeated by Batgirl and Robin. 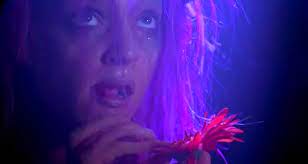 Her defeat at the hands of Batgirl leads to Poison Ivy returning to Arkham Asylum, but this time as an inmate. She’s clad in a grimy striped prison jumpsuit and she has lost all the allure of her former seasons. Winter has arrived, in both a literal sense with Mr. Freeze as a cellmate and a symbolic sense — she is withered and wilted, away from the sun. The seedy savior who once quipped, “So many people to kill, so little time,” is now dormant.

On the other hand, as pointed out in the recent issue of Batman Secret Files: The Gardener, Poison Ivy is resilient. The Gardener tells Batman, “She will grow again. But she will grow colder, harder.” Nothing can stop the seasons. They always pass, and with each turn of the sun, a new vine can climb to the top.

There will probably always be debate around whether Poison Ivy is a villain or not. The Poison Ivy of Batman & Robin is not the kind-hearted antihero who falls in love with Harley Quinn and saves her from the Joker’s abuse. She’s also not the noble martyr who players saw in the video game Batman: Arkham Knight nor is she the dry wit and reluctant third member of the Gotham City Sirens.

Instead, Poison Ivy is a femme florale whose campy outfits are more beautiful than any man-made garden. Don’t forget though — it’s not nice to fool with Mother Nature.

Which Poison Ivy outfit is your favorite? Let us know in the comments and don’t forget to Let Your Geek Sideshow!

Princess Leia: Rebel With a Cause