As the only main female character in the original Star Wars™ trilogy, it is understandable that the fashion of Princess Leia™ would be a central focus. Throughout the original trilogy, Leia’s outfits reveal not only her character development, but also how others might underestimate her — a big mistake when it comes to someone like Leia.

Instead of always wearing the dresses and tiaras associated with princesses, Leia’s fashion serves the dual purpose of looking aesthetically pleasing on-screen and revealing a lot about her as a person as well.

When the audience first meets Leia Organa™, she is wearing what will become her most iconic look. Her flowing hooded white dress is cinched at the waist with silver belt and her hair is pulled up in two buns on either side of her head. From the first moment she graces the screen, she is undeniably a princess. She carries herself with confidence and elegance, and the pristine white of her dress suggests that she lives a life of ease with few complications.

In this way, her dress is also a clever disguise. Although she insists to the enemy that she is “a member of the Imperial senate on a diplomatic mission to Alderaan™,” she is in fact actively attempting to participate in the formation of a rebel alliance to counter the Empire. Her delicate, soft appearance belies a shrewd, courageous young woman willing to put herself in danger for the betterment of the galaxy. 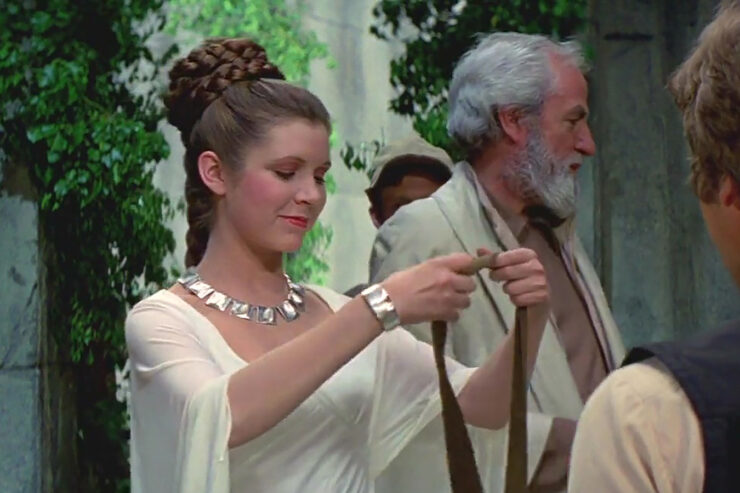 At the end of Star Wars Episode IV: A New Hope™, Leia wears another white dress very similar to the one she first appears in. This dress, worn as she awards medals to Luke Skywalker™ and Han Solo™ for their part in destroying the Death Star™, is more fitted than her first one with long, cape-like sleeves. Both her belt and her necklace are silver, and her hair is in a braided bun on top of her head. Her appearance here is decidedly more elegant and formal for the occasion while still honoring and hearkening back to the first dress she appeared in.

In Star Wars Episode V: The Empire Strikes Back™, viewers first see Leia as she works at Echo Base on Hoth™. She is dressed practically for the snowy landscape in gray boots and a white quilted vest over a white snowsuit. Her hair is braided in a wreath around the back of her head with soft tendrils framing her face. This is the first time that viewers see Leia in something other than a dress, beautifully balancing both form and function. She never puts her appearance before her purpose, yet still manages to look decidedly fashionable in all of her endeavors.

When Leia, Han, Luke, and Chewbacca™ arrive on Bespin™, seeking out the help of Lando Calrissian™, Leia changes into a rust colored tunic with matching pants and flats with a soft pink, flowing overcoat. She changes her hair to a simple bun with two braided loops. Leia once again looks very much like a typical princess, with Lando telling her, “You truly belong here with us among the clouds.” As always, she somehow manages to both blend into and stand out in her surroundings.

After Lando’s betrayal and the appearance of Darth Vader™, Leia returns to her Hoth clothes but leaves her hair in the style she had worn for their arrival on Bespin. These clothes, significantly more practical than her Cloud City™ look, allow her to move more freely as she and her companions attempt to save Han from Boba Fett’s™ clutches. While Leia is certainly no stranger to fancier styles of dress, she will always choose to dress for what the situation demands above all else.

Leia first appears in Star Wars Episode VI: Return of the Jedi™ in a convincing disguise as the bounty-hunter Boushh™. She arrives at Jabba the Hutt’s™ palace under the pretense of delivering Chewbacca for payment in a coordinated attempt to rescue Han from Jabba’s possession. Dressed as a recognizable bounty hunter, with a helmet hiding her face and her true voice masked, she is able to make her way to Han.

The scruffy-looking nerf herder is still frozen in carbonite, but Leia manages to release him. When he asks who she is, she removes her helmet and, sounding like herself once again, says, “Someone who loves you.” Leia’s disguise reflects her resourcefulness and courage as she once again foregoes the luxurious dress and privilege of her position as a princess to do the right thing and to fight for a cause that she believes in.

Although she was successful in freeing Han from his carbonite confinement, she and her co-conspirators are caught and held prisoner. Jabba, likely in an attempt to humiliate Leia, puts her in what amounts to a metallic bikini and a chain leash. Where many people would feel the inherent vulnerability of that outfit, Leia recognizes the opportunity it presents, and when given the chance during the commotion caused by the fight on Jabba’s sail barge, she uses the very chain Jabba had placed on her to strangle her captor. Everything that Leia wears ends up serving a purpose for her, even when she did not choose the outfits herself.

When the regrouped rebels arrive on the forest moon of Endor™, she dresses in pragmatic military garb with her long hair pulled back out of the way into a braid around her head. The mostly earth-toned colors allow her to blend into the wooded landscape. This look of hers takes on various iterations; she at times wears a camouflage poncho with a utility belt over the short-sleeved military shirt, and when on a speeder bike, wears a sensible, earth-toned helmet.

What is most remarkable about this outfit is that it is not remarkable at all. Leia is all but indiscernible in appearance among her Rebel allies. This is also perhaps her most utilitarian outfit yet, and in spite of its more mundane and down-to-earth look, Leia wears it well. Her role as a princess has never been about the power or privilege it provides for Leia — she has instead always used it as a foundation to aid the galaxy and she is not afraid to put in the work to do so. 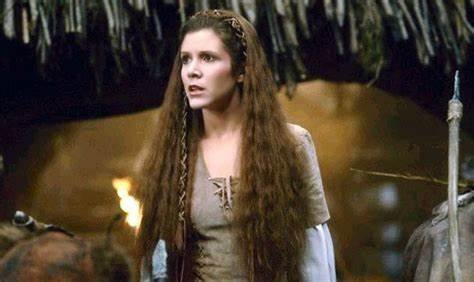 Leia and the rest of the group are captured by the Ewoks™, and the fuzzy inhabitants befriend the princess. She wears her long hair down save for a braid in a band across her head and a simple frock provided by the Ewoks. Part of what makes Leia so exceptional is her ability to adapt to her surroundings. The dress is simple and appears worn-in, but Leia, ever the diplomat, dresses at her hosts’ comfort.

Leia changes back into her Rebel military garb for the Battle of Endor™. She fights alongside everyone else, blending in once again with her compatriots. When the battle is won, she once again dons the dress given to her by the Ewoks and lets her long hair down as she celebrates the Rebel victory with her friends.

A Legacy of Resistance 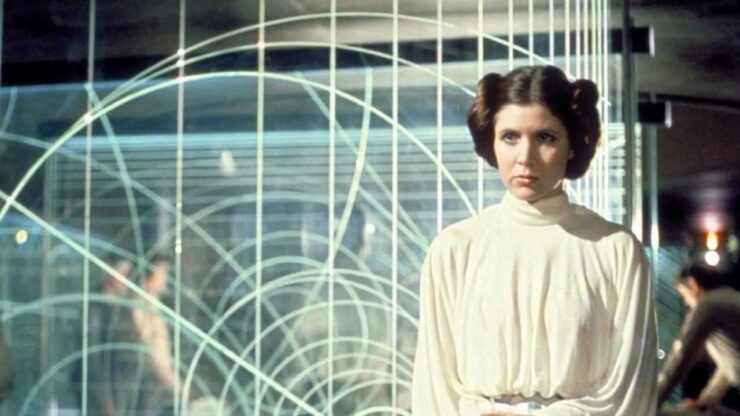 From Hoth to Bespin to Endor and everywhere in between, Leia’s appearance consistently changes in response to her surroundings and the company she is keeping. While to some these regular changes may seem like weakness, it is in truth a reflection of her adaptability, resourcefulness, and diplomacy.

Leia Organa gleans what the situation demands, keeps her priorities and purpose in mind, and everything down to her style of dress is often a calculated choice to accomplish what she needs to in order to help the Rebel cause. Which Leia outfit is your favorite? Let us know in the comments and don’t forget to Let Your Geek Sideshow!