The original Star Wars™ trilogy were films ahead of their time in so many different ways, not the least of which was the characterization and development of their main heroine, Princess Leia Organa.

She is never one to be diminished to a role of a damsel in distress; from the outset, Leia remains calm under pressure, always says exactly what is on her mind without mincing words, thinks on her feet, and displays courage at every turn.

Here are our five favorite moments that highlight why Leia is an asset to the Skywalker Saga and an iconic heroine for the ages.

Moments after the opening crawl of A New Hope, Leia is one of the first primary characters in the Skywalker Saga that the audience meets. From the moment that she graces the screen in her iconic white gown, her cool head and ability to think quickly under pressure shine through.

Aware of the direness of the situation now that Darth Vader has taken the Tantive IV, Leia thinks only of the Rebel cause instead of her personal safety. Knowing every moment counts, she quickly has R2-D2 record a message for Obi-Wan Kenobi and passes the plans for the Death Star, having just received them following the Battle of Scarif, onto the trusty droid for safe-keeping and delivery to the old Jedi Knight.

In a moment when many would have been stopped in their tracks by their terror of the fearsome Sith Lord or overcome with disappointment that they had not been able to complete the mission as planned, Leia is focused on remaining calm and doing what she has to to respond to the circumstances as they are to see the plan through. With the plans out of Darth Vader’s reach, Leia remains cool and collected facing down questions from arguably one of the most terrifying and powerful men in the galaxy.

Leia’s adaptability, her problem-solving skills even under the most harrowing of conditions, and selfless dedication to the cause that she believes are all evident right as the story begins.

Leia serves as an important participant in her own rescue in A New Hope.

Leia is freed from her cell following her capture by Darth Vader only to find herself cornered and under fire with Luke Skywalker, Han Solo, and Chewbacca. Luke learns from C-3PO that the main entrance is their only way out. As the Stormtroopers relentlessly fire their blasters in their direction and her would-be rescuers panic, Leia notes the futility of trusting her new companions to get them out of their current predicament.

Wrenching Luke’s blaster from his grip, Leia fires into a panel next to Han. When Han asks her what exactly she thinks she’s doing, Leia tells him, “Somebody has to save our skins!” She pivots into the corridor, firing as she makes her way to the garbage chute. The group faces a close call in the compactor, which Han does not hesitate to point out once they escape their near brush with death by crushing.

In spite of the danger that they faced taking the path Leia insisted on, the alternative was remaining pinned down in the corridor awaiting inevitable capture or death. Leia, at this time a very new addition to the team, demonstrated bravery and resourcefulness that would continue to make her an asset for every ensuing adventure.

Leia never gives up during their escape from Bespin in The Empire Strikes Back.

By the final act of The Empire Strikes Back, Leia has lost her home planet, her family as she knows it, and for the time being, Han Solo, who has been frozen in carbonite during their ill-fated stop in Cloud City. In spite of these immeasurable personal losses, Leia never gives into despair and focuses only on what she can do next to keep the Rebellion alive and her loved ones safe.

As Leia is escorted away at Darth Vader’s orders, she catches sight of Luke. True to form, she puts others before herself and shouts to Luke that he is walking into a trap. Eventually, Lando’s conscience gets the best of him, and he liberates Leia, Chewbacca, C-3P0, and R2-D2 from their captors. Without hesitation, Leia charges through the Cloud City’s corridors, covering her allies with Stormtroopers in pursuit, toward the east platform. She arrives just in time to see Boba Fett take off with Han Solo.

Leia, Lando, Chewbaca, and the droids barely escape Bespin following their failed attempt rescue attempt to rescue Han. Leia makes a bold decision, at the risk of great personal danger, to return when she feels Luke calling out to her. In both instances for Han and Luke respectively, Leia places the well-being of the companions she has come to love before herself. Leia’s courage is a remarkable trait on its own, but becomes something even greater when the situation demands that she be courageous for those that she loves.

Han Solo’s rescue at Jabba’s Palace in The Return of the Jedi.

As Return of the Jedi begins, Leia enters Jabba the Hutt’s palace disguised as the bounty hunter Boushh. When night falls, still in her bounty hunter garb, Leia frees Han Solo from the carbonite. Thrown off by her voice in the helmet and unable to see due to hibernation sickness, Han does not recognize Leia at first. When he asks who his rescuer is, Leia removes her helmet and tells him, “Someone who loves you.”

Their reunion is cut short by Jabba and his minions as Han is put in a cell with Chewbacca, and Leia is taken prisoner by Jabba himself. Leia knew the risks involved with their mission, but thanks to her love for Han and her trust in her friends to have her back, she willingly played an integral role in Han’s rescue.

Luke, Han, and Chewbacca dodge what would have been a grisly execution by way of the Sarlacc with the help of Lando Calrissian, and Leia takes advantage of the chaos aboard the Khetanna. Leia’s cleverness and sharp eye for opportunities even in moments of total pandemonium serve her once again when she uses the very chain that kept her prisoner to choke the life out of the murderous Hutt. Leia’s fearlessness, quick wit, and ability to respond to circumstances as they arise throughout her time on Tatooine lent themselves once again to another day saved.

The Battle of Endor in The Return of the Jedi.

As Luke faces Emperor Palpatine and his father, Darth Vader, the rest of the gang fight in what would come to be known as the Battle of Endor to take down the shields on the second Death Star. Both Han and Leia prove themselves to be capable leaders, even in battles with the highest of stakes and the most seemingly insurmountable odds.

As Han attempts to hotwire the door to the command station, Leia covers him from an onslaught of enemy fire. Leia is struck in the shoulder by a Stormtrooper, and Han abandons his work on the door. With no one left to cover them, two Stormtroopers approach and order the group to freeze. In spite of her fresh war wound, Leia furtively shows her blaster to Han. Han plays along with the orders they were given and as he turns, Leia shoots both of the Stormtroopers.

The Rebels on Endor successfully disable the shield, giving the Rebel ships the opening they needed to destroy the second Death Star. It is in this pivotal battle that Leia’s tenacity and determination see her ultimate mission from the moment viewers first meet her through. With the Empire overthrown, the Rebels have claimed the victory that Leia gave so much and worked so hard to achieve.

Princess. Diplomat. Fighter. Military leader. With her personal complexity, strength of spirit, brilliant mind, and unshakeable nerve, it is no wonder that Leia remains an icon within the Star Wars stories and beyond. In these moments and throughout the entire original trilogy, Leia’s contribution to the Rebellion’s success and her friends’ triumphs are undeniable.

Which Princess Leia moment is your favorite in the Skywalker Saga? Let Your Geek Sideshow and tell us in the comments below! 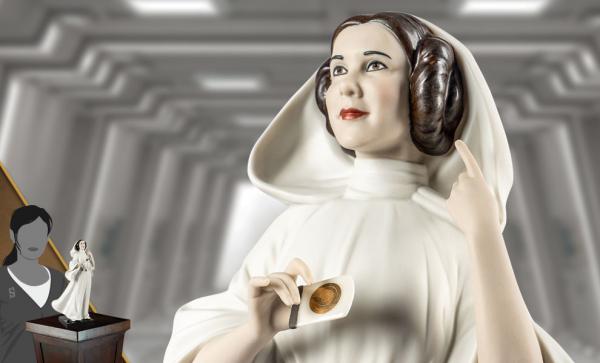 How to Audition to be a Sideshow Co-Host