Ranking the Davies and Moffat Companions of Doctor Who

Now, I already ranked the new era Doctors of Doctor Who, but, I’d be remiss if I neglected the companions. The people who stood by the Doctor through thick and thin. Traveled through all of time and space in the trusty TARDIS. Put up with his occasionally arrogant and oftentimes ludicrous behavior. Despite the obvious extraterrestrial barrier — the Doctor is an alien, after all — the companions wholeheartedly loved the Doctor.

Below, I have ranked the Doctor Who companions. However, to simplify things, I’ve only included companions from Russell T. Davies and Steven Moffat’s respective eras. (Mostly due to personal preference. Chris Chibnall’s era isn’t my favorite.) In addition, I’ve further narrowed the list down by not adding those who only hopped aboard the TARDIS a handful of times.

So, have at it. Peruse at your peril.

Nardole was an interesting fellow. He interacted with the Doctor for two Christmas specials and was a series regular for one season. Overall, I dug Matt Lucas’ portrayal of Nardole. However, his main purpose was to be comedic relief.

We didn’t learn too much about Nardole’s life outside of the TARDIS. He wasn’t human, which was what fascinated me the most about him. But instead of embellishing on his extraterrestrial origins, Moffat relegated Nardole to serving up the funny and only serving up the funny. He was a bit flippant at times. A mite clueless in others.

Nardole paired well with the Twelfth Doctor and I enjoyed their onscreen chemistry. I just wish we had more time with him.

I know, I know. This is probably sacrilegious. Rose Tyler is, unarguably, the most popular companion of new era Doctor Who. I liked her tenure on the series. But, if there’s one thing Davies faltered on, it’s Rose’s relationship with the Doctor. Now, her relationship with the Ninth Doctor was a perfectly friendly one. Then, he regenerated into the Tenth Doctor and that’s when Davies played the romance card.

One of the aspects I love most about Doctor Who is the lack of romance between the Doctor and his companions. Platonic friendships are few and far between on TV nowadays. Rose’s remaining days on the series were drawn out into one over-the-top scene from a romance novel. Don’t get me wrong, the overarching story in those episodes was unique and entertaining, but the Rose romance factor somewhat tainted them. Then, she eventually got her “happily ever after” with  a “clone” of the Tenth Doctor in another universe.

This isn’t to say I despised everything about Rose. I admired her tenacity — her inability to quit when times got tough. She was also charming, quick-witted, and overflowing with affection. Rose had a bubbly personality, which was as infectious as her charm.

Martha Jones was dealt a bad hand by Davies. The majority of her time on Doctor Who was spent pining for the Doctor. An unrequited love story for the ages. So, while she loved the Doctor from afar, the Time Lord himself was still thinking about Rose. I think Martha deserved better than that.

Thankfully, she ended up marrying Mickey (Rose’s ex-boyfriend) and genuinely appeared to lead a happy life with him. Not only that, but Martha was a legitimate doctor! She saved lives! She may not be a time-traveling alien from another planet who called himself “the Doctor,” but Martha was still a medical professional nonetheless. To me, that kicks all kinds of butt.

Martha was kindhearted and didn’t tolerate flak from anyone. She stood up against injustices and championed for what was right. And did I mention she was a doctor? I imagine if she were a real person and working today, she’d be showing this pandemic who’s boss.

Initially, Amy Pond annoyed me to no end. She came across as a whiny, petulant child who fawned all over the Doctor. However, she significantly grew as a person over the seasons. Partially because of her strengthened bond with her husband Rory, who inevitably joined Amy and the Doctor on their travels.

By the end of her run, I was actually sad to see her go. Her evolving maturity and her unbreakable loyalty to Rory was admirable. She would do anything and everything for the people she loved. Including joining her husband in a different timeline, separate from the Doctor and her family, for all of eternity. That’s true love.

To me, Amy probably had the most growth out of any companion on the new era series.

Good old Rory. The last Centurion. He literally protected his slumbering wife Amy who was trapped inside an elusive box for thousands of years. How did he go that long without having to pee? Like Amy’s self-sacrifice for him at the end of their Doctor Who run, Rory’s act was also the very definition of true love.

Initially, Rory was the quiet, submissive boyfriend who accompanied his brazen girlfriend and an alien in a flying blue box. But Rory also evolved over his multiple-season tenure. He grew a backbone. He learned to stick up for himself. When Amy was being unreasonable, Rory would step in and help her put things into perspective.

Rory may be kind and meek, but don’t mistake that for fearfulness. Rory would gladly fall on his sword to save those he loves.

Donna Noble and the Tenth Doctor easily had the best chemistry in the Davies era. They poked fun at each other, riffed off each other, and acted more like siblings than friends.

After Ten’s romantic entanglements/associations with Rose and Martha, seeing him interact with Donna in a platonic way was refreshing. Donna was bullheaded and didn’t suffer fools. She spoke her mind and kept the Doctor’s ego in check. Not to mention, Donna saved the world. That’s more than admirable in my book.

Donna also knew how to have fun and always had a cheery disposition. She truly enjoyed traveling with the Doctor and fully enabled her adventurous side. And Catherine Tate is just magical, so there’s that.

My beloved Bill. She complemented the Twelfth Doctor well, despite her short lived appearance on the show. Bill was the very definition of inquisitive. She asked questions that most people either feared to ask or didn’t think of in the first place. Bill seemed to view the world through a different lens than most folks.

In addition, she was immensely clever. She was eager to see the universe with the Doctor and was always game for an epic quest. Bill blatantly stood against injustice whenever she encountered it. She also had a strong moral compass and wore her heart on her sleeve.

Even when she was transformed into a Cyberman, she was wholly capable of overriding her cybernetic core and exhibiting the last remnants of her humanity. That takes a lot of strength and a whole heaping helping of heart. Not to mention, she was the first Black LGBTQIA+ character on Doctor Who…ever! That’s an accomplishment. 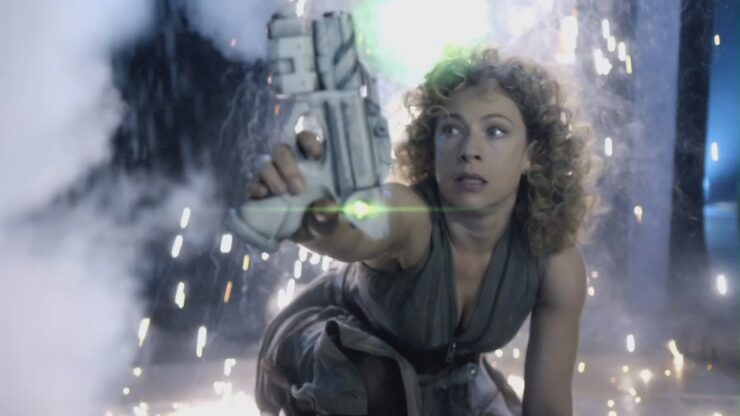 Spoilers! I always connected with River Song partially because her real name was also Melody. I’m legally obligated to support other Melodys. There aren’t that many of us wandering about.

Anyway, River was pure spunk. She oozed charm. Her love story with the Doctor tugged at my heartstrings. River was cheeky, especially with the Doctor. She was also part Time Lord which, at the time, was the closest thing we had to a female Time Lord. River understood the Doctor and the TARDIS inside and out. She also held multiple degrees and possessed an overabundance of intellect.

River was a highly skilled fighter and had done her fair share of crimes. I’m usually drawn to morally grey characters, and River fit that bill. River was an enigma. She incessantly appeared at the most inopportune times or when you least expected it. River’s adventurous, boisterous spirit was bedazzling. Alex Kingston painted a vivid picture of River with her portrayal.

Now, my number one companion is…drum roll, please…Clara Oswald! Unpopular opinion: she’s the bee’s knees. I feel that public sentiment regarding Clara tends to fall toward the negative side of the spectrum. Most found her annoying and bossy. I’m typically attracted to characters that most people don’t like.

Clara had incredible chemistry with the Eleventh and Twelfth Doctors. She was the perfect companion: clever, witty, and down for anything. She also had a big heart and a penchant for doing the right thing, even if it’s the unpopular thing. Clara kept the Doctor in check and always called him out when he was being over dramatic. She helped him stay centered.

I think folks misconstrued her leadership capabilities for bossiness. There were plenty of times when Clara stepped up to the leader plate without batting an eye. One of her most heartbreaking scenes was in Season 9, when she was marked for death and decided to face her fate head on. She was brave and never succumbed to mind-numbing fear.

How would you rank the Doctor Who companions of the Davies and Moffat eras? Let Your Geek Sideshow and sound off in the comments below!