Please note that the following article contains major plot spoilers for episode 3 of What If…?

After two uplifting, inspiring episodes that saw Peggy Carter and T’Challa become heroes even under very different circumstances, What If…? took on a bleak, grim tone this week during the episode entitled “What If…The World Lost Its Mightiest Heroes?” As the title suggests, the Watcher guides viewers through a universe that loses most of its original, strongest defenders in less than a week. The episode, divided into individual days, takes viewers through the deaths of five of the Avengers, one by one. 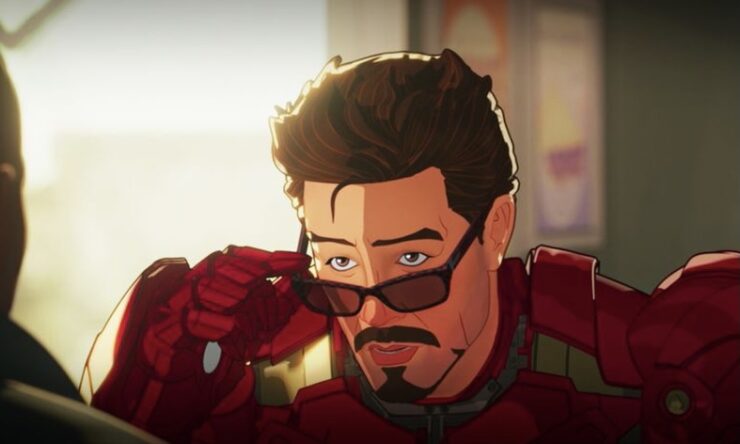 Episode 3, set during the same eventful week of Iron Man 2, Thor, and The Incredible Hulk, begins with Nick Fury and Natasha Romanoff together in a car. While it is understood in the Marvel Cinematic Universe that these two characters have a significant amount of trust in one another, episode 3 of What If…? provides further insight into the relationship between the agent and the director of S.H.I.E.L.D. Beyond clearly having a great deal of respect for one another, their banter in the car also shines some light on what’s clearly a mutual fondness. Captain America: The Winter Soldier suggested profound trust between Black Widow and Fury that this episode of What If…? only further deepens.

The episode then proceeds similarly to Iron Man 2: Tony is found in his Iron Man suit eating a donut in a giant donut on the rooftop, Fury attempts to recruit Tony, and Natasha injects the snarky billionaire with an antidote to the poisoning he is experiencing from his arc reactor. In this universe, however, instead of receiving a temporary fix to his ailment, Tony Stark dies immediately, much to the shock of both Natasha and Fury. Even with just the loss of Tony, a fan’s mind cannot help but run through all of the scenarios that could go terribly awry without the armored Avenger there to help save the day. 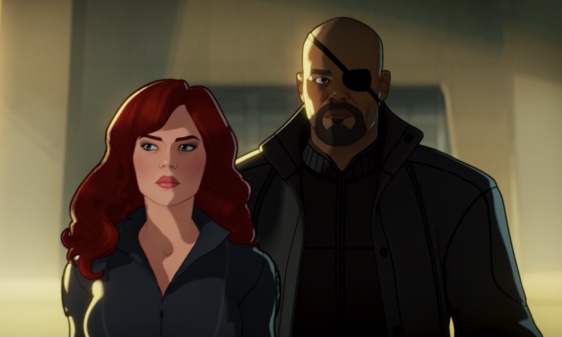 Tuesday ushers viewers to New Mexico, where Agent Phil Coulson is overseeing the discovery and investigation of Thor’s fallen hammer. Coulson calls Fury to express the urgency of the situation, and Fury assures him he will be there. First, however, he needs to speak with Natasha, who has since been arrested for the murder of Tony Stark. Taking some moments away from her guards, Natasha tells Fury that she will absolutely escape, and Fury tells her that he is depending on it. He discreetly slips the antidote needle that killed Tony Stark into her bound hands.

“Sure you wanna take another big swing on me, boss?” Natasha asks Fury, echoing their previous conversation about Tony’s potential and her past recruitment to S.H.I.E.L.D. With complete assurance, Fury replies, “Safest bet I’ll ever make.” In an episode that features some of the biggest, most popular names in the MCU, the relationship between Fury and Black Widow is undeniably the heart and a significant driving force of the story.

Natasha is able to escape, and Fury makes his way to New Mexico. From this point, the episode takes a similar path to Thor, as the fallen God of Thunder takes out agents guarding his hammer. Coulson is able to get a visual on the long-locked intruder, describing him as having “really great hair.” When asked for clarification from a very confused Fury, Coulson doubles down and tells his boss, “It’s an accurate description. Sir, he’s gorgeous.” Similar to his role in the MCU, Coulson also provides a certain degree of levity and good-hearted humor during this episode of What If…? Particularly in this universe, which only becomes more dismal as the week goes on, Coulson’s humor stands out and is even more welcome.

Clint Barton, AKA Hawkeye, aims his arrow at Thor as he approaches the hammer. In spite of being ordered to not fire, Clint’s arrow flies from his bow and pierces the now-mortal god’s heart. Horrified and confused, Clint insists that he did not fire. When confronting the sharpshooting agent, Fury struggles to reconcile Clint’s insistence that he did not intend to fire with his precision as an archer. Fury can’t figure out why such a trustworthy agent would take such a grave departure from direct orders.

Clint is taken into custody, and when Fury goes to speak with him, the director finds him dead. Now, with three ideal candidates for the Avengers Initiative dead within two days, Fury begins to recognize that this is no coincidence. Earlier in the episode, the Watcher notes that humanity is “so eager, so willing to face the impossible, yet blind to the bigger picture,” and finally Fury is making connections and seeing that each death cannot be an isolated incident. 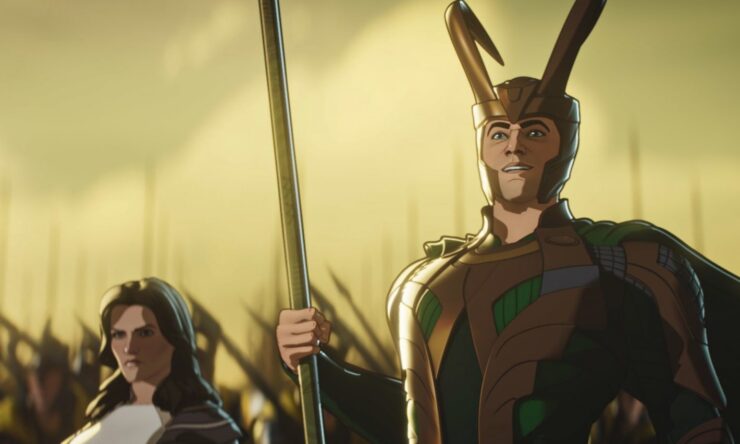 Wednesday’s events begin at Culver University, a location first seen during the events of The Incredible Hulk. Natasha confronts a very defensive Betty Ross, hoping that she can help figure out how the antidote killed Tony. Once Betty establishes that she does not know where Bruce is, she inspects the needle and tells Natasha that whatever killed Tony was a projectile, and that the antidote never even left the needle.

Preparing to leave, Natasha gets a call from Fury and finds out that Clint is dead. Visibly upset and angry, she asks who she needs to kill. Fury tells Natasha that the deaths seem to be connected to the Avengers Initiative, and that finding Bruce is top priority. Natasha, ever observant in this universe too, notices Betty’s gaze shifting to a cabinet. Bruce is hiding inside, and Natasha tells him that they need to leave. What makes this scene particularly interesting is that it’s Mark Ruffalo’s Bruce Banner that appears, even though The Incredible Hulk starred Edward Norton. By having Bruce both look like and be voiced by Mark Ruffalo, it made the far-too-often overlooked solo Hulk movie feel more acknowledged and further established it as part of the MCU Hulk’s past.

Back in New Mexico, an Asgardian army featuring Lady Sif and the Warriors Three, led by Loki, descend on S.H.I.E.L.D.’s site. Loki tells Fury that he intends to destroy the planet as retribution for his brother’s death. As he wields the Casket of Ancient Winters and begins to freeze S.H.I.E.L.D.’s forces, he and Fury come to an agreement that if Fury can deliver Thor’s killer before sunrise, Loki will reconsider his mission to destroy the planet.

Meanwhile, at Culver University, Bruce is shot (despite orders from General Ross to hold fire) and the Hulk emerges. As he takes on General Ross’ strike force, the Hulk begins to grow beyond his already considerable size, eventually exploding in a cloud of green dust. Betty and Natasha watch on in horror as the seemingly unkillable Hulk perishes. With four would-be Avengers now dead, Natasha and Fury’s resolve to figure out who is behind all of this death only intensifies.

Natasha now must use Coulson’s login information for S.H.I.E.L.D.’s database (with the hilarious password #SteveSteveSteveIHeartSteve0704). She seems to figure out who is behind the assassinations, noting that a woman who had been dead for two years was accessing files. As she calls Fury to share what she found with him, Natasha is seemingly attacked by an unseen force. At first confident, Natasha recognizes that this is a fight she cannot win, and shouts into Fury’s voicemail, “Fury, it’s Hope! It’s all about Hope!” before she is dragged into the darkness of the library. Both in this universe and the Sacred Timeline seen in the live-action MCU, Natasha is willing to sacrifice her life for the mission and ultimately for the people that she cares about. Her last action in both of her deaths that viewers have seen is entirely focused on the greater good, highlighting the dedicated and selfless nature that seems to be intrinsic to Black Widow in multiple universes.

Replaying Natasha’s message repeatedly, Fury is able to realize what Natasha was trying to tell him. As he prepares to leave, he tells Coulson that there was still another Avenger, pulling out the beeper that was seen in both Captain Marvel and in the after credits of Avengers: Infinity War. Fury makes his way to the Asgardian encampment, having finally seen the bigger picture and figuring out with Natasha’s sacrifice what was really going on. 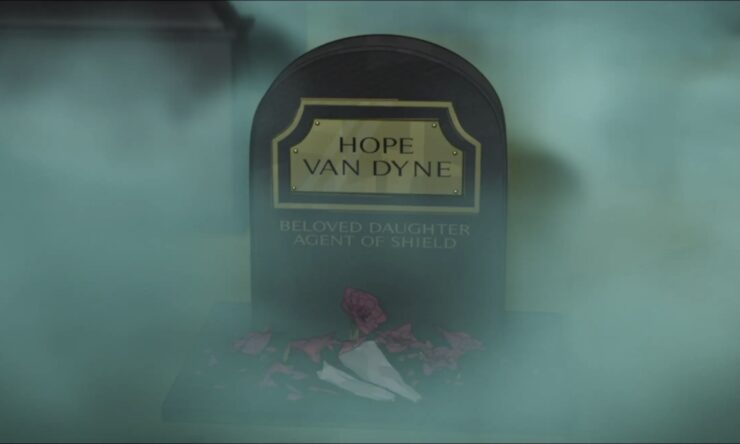 It is the early hours of Thursday morning, and Fury stands above Hope Van Dyne’s tombstone. A haggard Hank Pym emerges from the fog, wearing a suit that appears to blend his Sacred Timeline Ant-Man suit with that of Yellowjacket. Hank tells Fury that Hope’s death was Fury’s fault, as Fury “filled her head with nonsense about protecting humanity and saving the world.” Fury reminds him that she died on a mission, and wonders why killing the other would-be Avengers was the path that Hank chose. Hank says he wanted to take something away from Fury and from S.H.I.E.L.D., as images of each assassination method flash across the screen.

The two begin to fight, and Hank remarks that Fury is “still pretty spry for a guy with a corner office” as Fury demonstrates remarkable combat skills. Fury’s skills, however, start to seem far beyond the abilities of even a spy and agent as accomplished as Director Fury; he laughs as he begins to teleport, multiply, levitate, and conjures ice to entrap Hank. Fury, it turns out, was Loki the entire time. Hank is led away by Asgardian soldiers and Loki, relishing in his victory and true to form, tells Fury that he is thinking of considering his stay on Midgard. 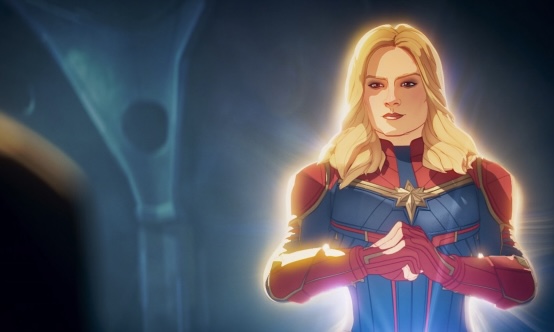 Friday dawns with Loki having not only extended his stay on Earth, but in a matter of hours taking over the entire planet with ease. After all, his conquest was unhindered by Earth’s Mightiest Avengers as he was in The Avengers. Loki speaks from the United Nations headquarters, delivering the same speech that he gave in Germany in The Avengers, complete with the iconic line, “You were made to be ruled.” It is not just Loki’s victory that makes this universe’s fate a frightening one, but also the ease and speed with which he accomplished it. What’s more, instead of being aided by an army from Thanos, he is supported by the Asgardians in the wake of Thor’s death.

Meanwhile, Coulson and Fury survey the coffins of the fallen heroes. Although certainly at a disadvantage, Fury’s will to not give up remains unshaken. The next scene finds Fury discovering Captain America’s shield frozen in ice, as the Watcher reflects on the fact that hope never dies. He at first seems to say hello to Steve as he says, “Welcome back, Captain,” but the camera pans to Captain Marvel, who asks her ally from the ’90s where the fight is. Having had five out of the initial six Avengers slain and with Loki’s takeover of Earth, Fury now must turn to Captain America, as well as call on Captain Marvel much earlier than he did in the Sacred Timeline. As always, in any universe, Fury is sometimes down, but he is never out, and Captain Marvel, always loyal and ready to do the right thing, appears when she is called and needed.

In an episode riddled with challenges and incredible loss, the idea of hope enduring as long as there are people present willing to fight for what is right, is undeniable. While the losses of beloved characters were painful to witness, seeing that the Avengers are seemingly destined to endure in some shape or form speaks to not only the hope that these characters inspire within their universe, but the hope that they inspire within fans as well.