Much of what viewers glean about a character’s personality and evolution comes straight from the script. The things that they say, the decisions they make, their choices in allies and enemies, and their goals tell the audience who this person is and what they stand for.

Thanks to the visual nature of film and the creativity of the artists behind the scenes, however, the audience can also learn a great deal about a character by what they wear and the weapons and resources that they use. That’s where Sideshow’s new ongoing series, Suit Yourself, comes in. Suit Yourself examines how style is a critical form of characterization. And Rey™, throughout her time in the sequel Star Wars™ trilogy, is an excellent example of style as a character development tool. 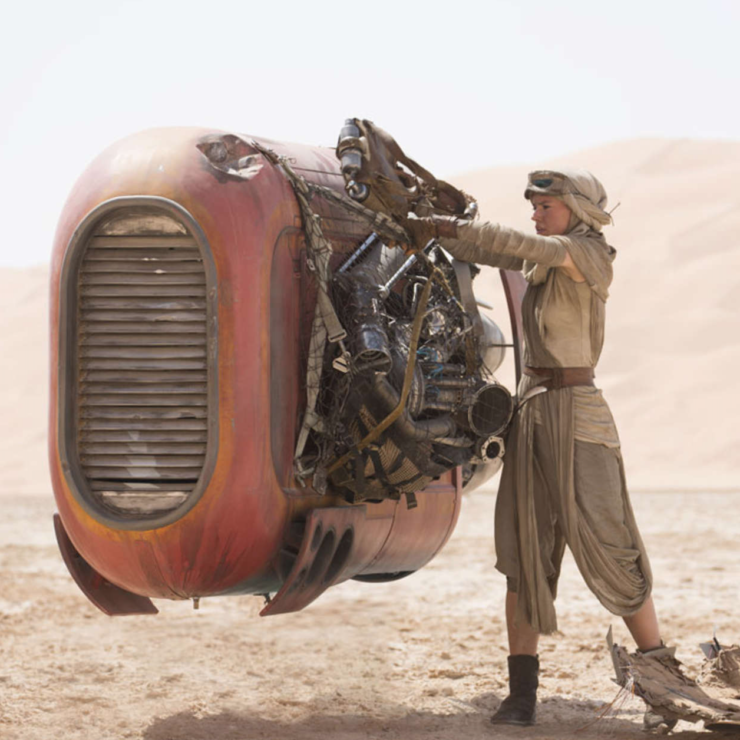 The audience first meets Rey as she scavenges on Jakku™. She’s dressed practically for the unforgiving climate; goggles protect her eyes from the harsh sands and her clothes blend in to the desert landscape. In spite of how little Jakku has to offer, Rey’s resourcefulness and diligence are undeniable. Everything she wears and has with her, from her clothing to her speeder, has clearly seen a great deal of use, appearing worn down but well-maintained.

As Rey makes her way back to the Niima Outpost™ to sell her wares for a meager return, she passes her diverse and weary cohabitants. Although the people and creatures at the Outpost vary greatly in appearance, Rey does not stand out. Viewers later see that her ability to blend in is intentional; she does not know who she is or where she comes from, but she aims to go unnoticed while waiting for those that left her there to return.

The first weapon Rey has at her disposal is her quarterstaff, which was likely found during one of her scavenging expeditions. She first brandishes it when she rescues BB-8™ from a cruel fate of being captured and sold for parts. She does not actually fight with it, however, until she refuses to sell BB-8 for an impressive 60 portions and defends him from an attempted kidnapping. Rey proves herself to be a proficient fighter as she defends the little droid, once again highlighting her resourcefulness and good heart, in spite of being outnumbered and her relatively small stature.

Rey wears her Jakku desert garb for much of the remainder of the film, and where it once helped her blend in to her surroundings, she now stands out as she travels the galaxy with her newfound companions Finn™, Han Solo™, and Chewbacca™. From the pilot seat of the Millennium Falcon™ to the lush greenery of Takodana™ to the frigid snowscape of Starkiller Base™, Rey’s outfit serves as a visual reminder of her insistence that she must return to Jakku and her struggle to accept, as Maz Kanata™ tells her, “The belonging you seek is not behind you … it is ahead.”

On Takodana, Rey’s destiny finds her in the form of the lightsaber that once belonged to Luke and Anakin Skywalker™. Although she at first refuses to accept the lightsaber and, in turn, her calling, she steps into her power on Starkiller Base when the lightsaber flies past Kylo Ren™ and into her extended hand instead. It is a pivotal moment for Rey as she accepts her path and her destiny. The fighting skills that she picked up with her quarterstaff and her growing acceptance of her abilities with the Force come to her aid as she duels Kylo Ren.

As the movie draws to a close, Rey changes into her Resistance outfit. It features neutral earth tones and more structured lines than her desert garb, and she also bears new weapons: a blaster from Han and Luke’s former lightsaber, both of which she has acquired in her travels. Rey has relinquished her past on Jakku in favor of her destiny.

In spite of a less than enthusiastic welcome on Ahch-To™, Rey is able to convince a hesitant and standoffish Luke Skywalker™ to train her. Throughout her training, she wears variations of the Resistance outfit featured at the end of the first movie. At times she has her vest and sleeves removed, and also occasionally dons a soft grey poncho. Rey’s clothing choices are as practical as ever; she wears things that she can move in and stay comfortable in, changing her outfit up as her activities demand. The neutral, earthy tones of her new clothes also blend into the rainy, gray landscape of Ahch-To, serving as a visual representation of Rey adapting to the lands and way of life that she finds herself in. During her time on Ahch-To, she trains with Luke and on her own to hone her skills using the Force along with her lightsaber fighting abilities.

Following a heated disagreement with Luke about the best course of action to aid the Resistance, Rey boards the Millennium Falcon with Chewbacca and R2-D2™, leaving her reluctant teacher behind. When viewers see her next, she has boarded the Mega-class Star Dreadnought™ to confront Supreme Leader Snoke™. During her journey, she has changed into a darker earth-toned outfit that blends her two previous outfits together; the arm wraps remain while some of the more flowing elements reminiscent of her days on Jakku have returned. Of course, the earth-tones of her Resistance outfit are still represented. Rey has incorporated aspects and lessons from Luke, but also stays true to her own heart knowing that she cannot stand idly by.

For the first time, Rey does not bring her quarterstaff with her, coming armed instead with her blaster, lightsaber, and strengthened Force abilities. Although her quarterstaff had served her well on Jakku and even Ahch-To, she recognizes that the formidable foes before her require more significant firepower.

Following her short-lived alliance with Kylo Ren, her lightsaber is destroyed in a Force-powered tug of war. In spite of her lightsaber being broken, Rey’s determination keeps her pressing forward and she uses the Force to save the Resistance from being snuffed out.

Star Wars: The Rise of Skywalker™ 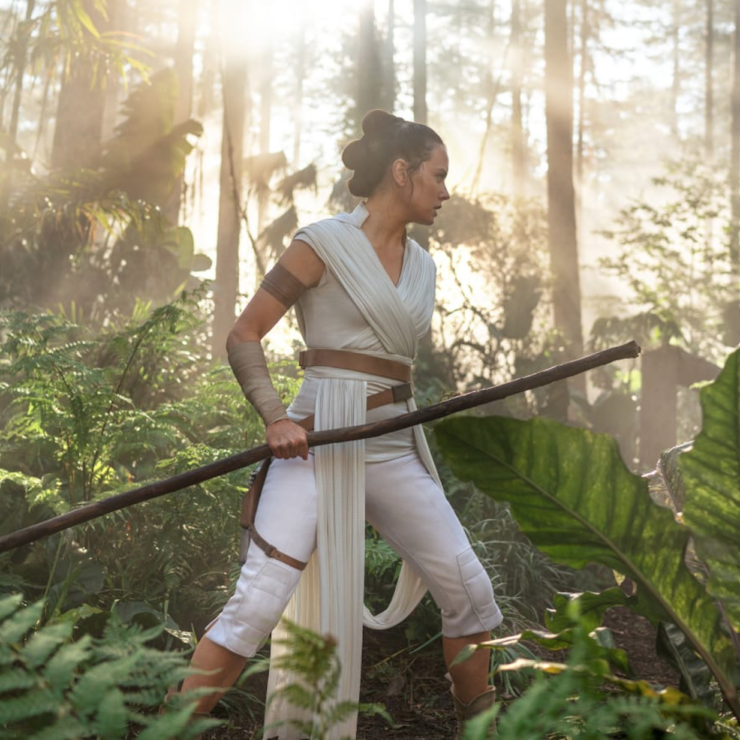 Star Wars: The Rise of Skywalker finds Rey now being trained by Leia™. Her hair is back in her iconic triple buns, and her clothing blends aspects of all three of her previous looks. As always, her clothing is pragmatic, allowing her to train, run, and fight without restriction. The more structured appearance of her pants carries over from her Resistance look. The flowing fabric that crosses her torso, seen in both her Jakku and Jedi training outfits, is present once again.

While the color palettes she previously wore helped her blend into her surroundings, Rey’s new ensemble is a striking, bright white that stands out in sharp contrast to almost every setting she finds herself in. As her confidence in herself and her abilities grow, Rey feels less compelled to become an unnoticed part of her surroundings. She also allows her experiences, lessons, and connections to shape her without entirely shedding foundational aspects of who she is.

Rey now fights and defends herself with her growing strength in the Force, her newly repaired lightsaber, and the blaster that Han had given her is in a holster on her belt. Her trusty quarterstaff even makes an appearance. Much like her clothing choices, her weapons are a blend of those she has carried with her throughout the journey, strengthened by everyone she meets.

As the film progresses, Rey acquires Leia’s lightsaber. Wielding the Force and the power of the Jedi that came before her, along with Luke and Leia’s lightsabers, Rey’s journey culminates in her rejecting her family legacy as a Palpatine™ and overthrowing her Sith Lord™ grandfather. Having adopted the new family name of Skywalker and honoring her fallen teachers by burying their lightsabers in the sands of Tatooine™, Rey reveals for the first time a lightsaber of her own creation. With a yellow blade, the lightsaber is unique compared to the usual blue and green that former Jedi have wielded. The hilt itself is also unique and deeply personal. Rey the Scavenger, whose ability to find and repurpose the scraps she acquired, creates the hilt of her lightsaber using parts from her quarterstaff. She has beautifully blended her past as a scavenger and her future as a Jedi, and perhaps for the first time, Rey knows who she is and where she belongs.

Although the sequel trilogy does a remarkable job shining a spotlight on characters that we already love and wraps up the Skywalker Saga, it is undeniable that the three movies’ focal point is Rey. Audiences see her personal evolution from steadfast scavenger to determined resistance fighter to self-assured Jedi, all in the scope of three Star Wars™ films. Her words, actions, fighting style, clothing, and weaponry manage to beautifully evolve as she presses forward while still honoring the kind, driven, resourceful, loving person that she is at her core.

What’s your favorite Rey style choice? Let us know in the comments and don’t forget to Let Your Geek Sideshow!

Recap: What If ... Doctor Strange Lost His Heart Instead of His Hands?