The Eternals, Shang-Chi, and Blade. What didn’t the MCU announce at Comic-Con?

For Asgard-lovers, the best announcement had to be the reveal of Thor: Love and Thunder. Taika Waititi (Thor: Ragnarok) will return as director for this fourth Thor film. Also set to return are stars Chris Hemsworth, Tessa Thompson, and even Natalie Portman.

You heard right. Our girl Jane Foster will be back, but she won’t just be Thor’s love interest anymore. Portman’s character will wield Mjolnir as Thor, a heroic move that was made a major Marvel comics storyline in 2014.

Want to learn more about Jane Foster’s road to becoming the Goddess of Thunder? Stick around while we gush about all things Thor- not “Lady Thor” or “Female Thor”. We’ll give a quick but comprehensive guide on the Jane Foster version of Thor, including her first appearance, history, and epic adventures. 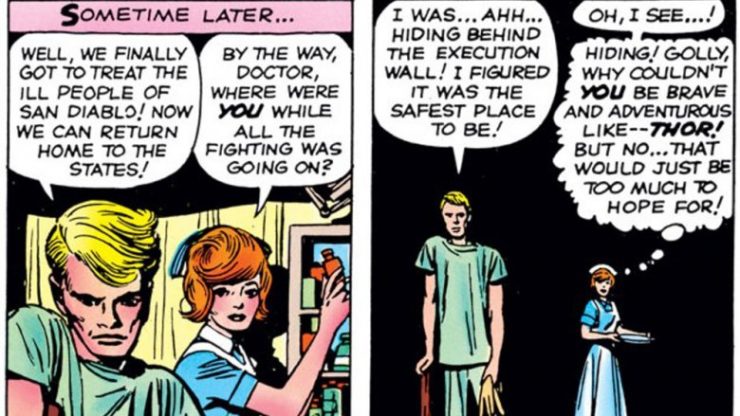 Did you know Jane Foster has been around for almost as long as the God of Thunder? The Mighty Thor first appeared in Journey into Mystery #83 with Jane’s own first appearance only one issue afterward in #84. Like in Thor and its sequel The Dark World, comic book Jane was equally drawn to Thor and vice versa—except it’s a little more muddled than that.

In their first appearances together, Thor had a dual identity, a secret identity. He went by the name of Donald Blake. This persona was a fragile man, a doctor whose cane could transform into his signature hammer and granted him the powers of Thor. Jane practiced medicine alongside Blake as a nurse, but she saw him as a meek man. Meanwhile, she was in love with the heroic Thor, while Donald Blake was secretly in love with her. Little did she know the apple of her eye was always in front of her.

Eventually, Jane discovered Thor’s true identity and went on to be a recurring important character in the series. 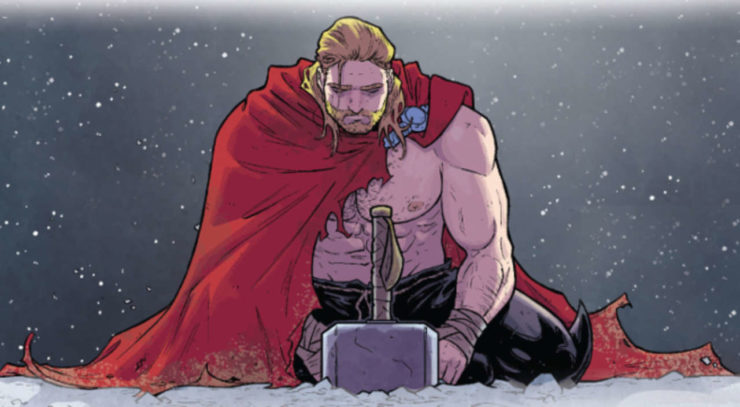 We all know Thor Odinson came first as a hero, but in order to understand when and, more importantly, why Jane picked up Mjolnir and everything that came along with it (quintessential god of thunder powers, Asgardian protectorship, etc.), we have to discuss Jason Aaron’s 2014 Original Sin event.

In a battle between Thor and Nick Fury, the Director of S.H.I.E.L.D was able to stop Thor by whispering one simple sentence in his ear. For 3 years—THREE YEARS—readers could only speculate what Fury had said, revealed to be a callback to Thor’s fight with Gorr the God Butcher in Jason Aaron’s Thor: God of Thunder series. The uttered sentence had the devastating effect of causing the hero to become unworthy.

Thor dropped his famous hammer and it fell to the moon, awaiting someone else, someone worthy, to lift it.

Many Come for Mjolnir But Only One Woman is Worthy 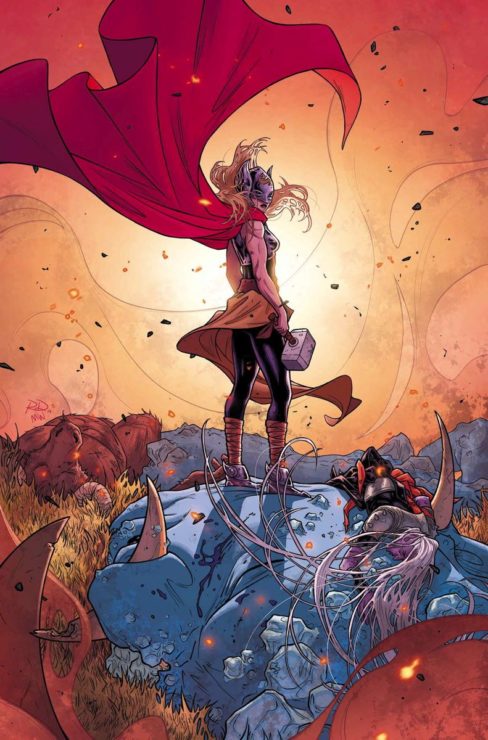 When news of Thor’s unworthiness broke out, many powerful beings went to the moon to collect Mjolnir but not one could wield the hammer, not even Odin himself. Because that’s not what Mjolnir intended. The hammer itself called out to Jane Foster, who eventually accepted the request and asked Heimdall to transport her to the moon.

When she arrived, she lifted the hammer as easily as Odinson (the new name unworthy Thor was going by) once had and took on all powers and strength associated with the God of Thunder. As if this isn’t reason enough to validate a new, female Thor, the inscription on her weapon also changed from ‘he’ to ‘she’ to read: “Whosoever holds this hammer, if she be worthy, shall possess the power of Thor.”

And so she goes by Thor. She is Thor.

Backlash Against the New, Unknown Thor 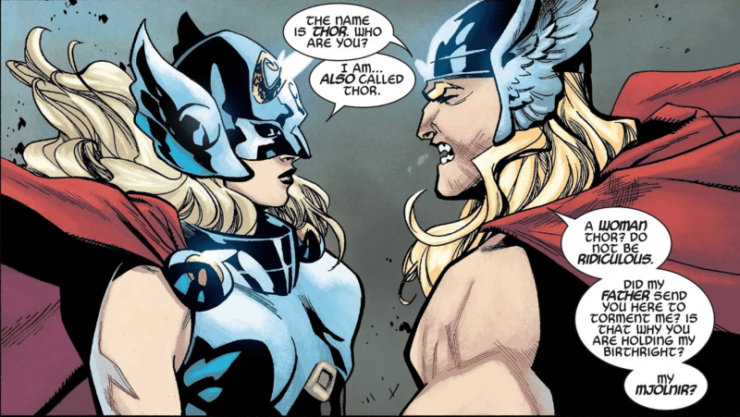 Thor Odinson may have gone on his own “unworthy” journey and dropped his first name out of penance, but he was anything but ready or wanting of a replacement to take the hammer in his stead. Odinson and his father are two of Jane’s biggest opponents at first. Of course, they really have no clue that Jane is the new mysterious Thor, and only see a usurper to Odinson’s birthright.

It takes a while, but Odinson eventually accepts the new Thor when he sees she fights for the good of the realm. Dad, on the other hand, is less inclined to have anyone replace his son. Odin brings war to the female Thor but Odinson and Thor both fight him off.

A New Kind of Strong 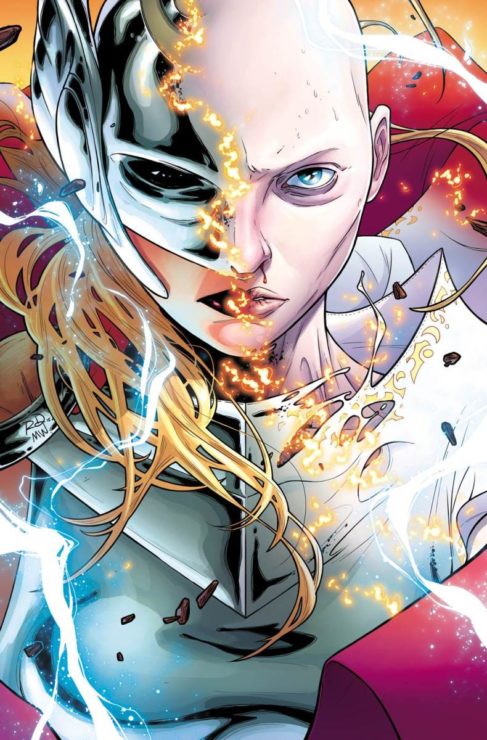 At the time Jane becomes Thor, she is everything but a likely a candidate for two reasons. The first is that she is simply mortal with no powers, and the second is that she is battling cancer.

Jane had been battling breast cancer before picking up Mjolnir and despite being bestowed all Thor’s powers and strengths, the hammer does not cure her mortal form. Instead, the magical weapon becomes a great positive and negative catalyst for Thor.

The hammer’s magic strengthens her and makes her capable of ending conflict with Malekith the dark elf, fighting an interstellar war that includes the all-powerful Phoenix itself, and makes her an equal opponent against Odin. Ultimately, though,, Jane’s powers are greater than the brute strength we see in combat.

Every time Jane uses Mjolnir, the magical weapon has an adverse effect on her cancer: it cancels out her chemotherapy, expunging the chemicals as if they were a poison. Jane’s true strength comes from her determination. She knows how her magical transformation hurts her but she still chooses to sacrifice herself for the good of the ten realms. Why? In her own words: “There must always be a Thor.”

The Death and Ultimate Sacrifice of Jane Foster 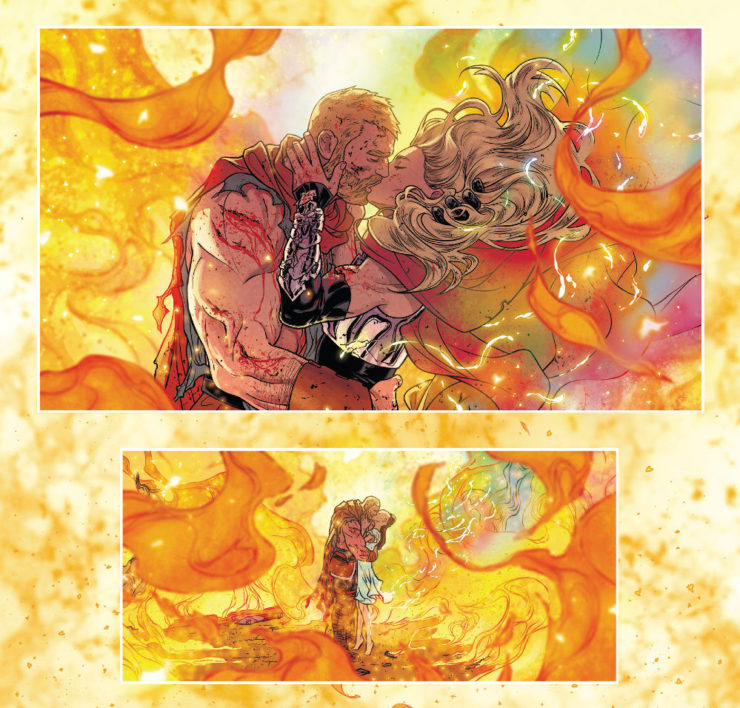 Eventually, the adverse magical effect has damaged Jane so much that simply transforming into Thor one more time will kill her. Jane knows this, her fellow Avengers and allies know this, and even Doctor Strange warns her against battling as Thor again.

Fate does not have Jane’s best interest in mind, though. Mangog, the Judgment of all Gods and a nigh-unstoppable force, comes to seek vengeance against Asgardia and sends the floating realm crashing toward the Sun.

If there is anyone who still questions her, Jane proves her ultimate worthiness in The Mighty Thor #705, titled The Death of the Mighty Thor. She ties Mangog up with the unbreakable chains used to bind the wolf Fenris and she locks the chains with Mjolnir, sending both the god-judge and the tool that made her a god into the sun.

Without Mjolnir, Thor reverts back into her true form, dying as the mortal Jane Foster on the surface of the Moon where her journey began.

What do you think about Jane Foster’s time as Thor? Let us know in the comments, and don’t forget to Let Your Geek Sideshow!